Ever since opening the satellite gallery in Denver at The Source last year, Station 16 has brought an impressive roster of artists that largely fit into the “urban” or “street” genres. The list, which has included the work of Mr. Brainwash (from Banksy’s Exit Through the Gift Shop film) to Laurence Valliéres (who made the cardboard T-rex and Mickey Mouse sculpture last year) to Denver’s own Mark Sink (the founder of Month of Photography and an old friend of Andy Warhol), keeps stacking up with each new addition. And the newest one is an anonymous street artist who goes by the moniker Stikki Peaches. Opening on May 9 and on view until June 2, Never Forever features original mixed media paintings by the rogue artist. 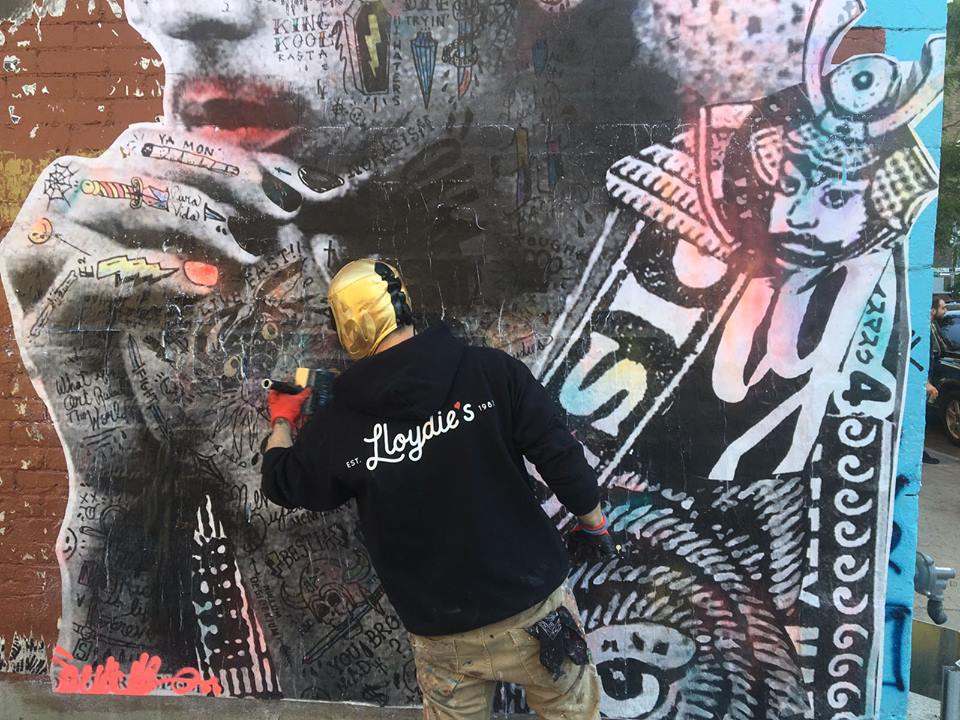 Like many of the artists Station 16 supports and represents, Stikki Peaches is based in Montreal. After all, that’s where the original Station 16 Gallery exists, but also Montreal tends to spit out edgy, contemporary and urban artists. Mostly, Stikki Peaches works in the field of wheatpaste — a style of street art that requires paper and glue to affix pictures or photos to walls — and is known for creating celebrity mash-ups. His career started in 2008, long before the general attitude toward street art was acceptance and appreciation. Last year, before the start of CRUSH Walls, Stikki Peaches pasted two larger-than-life mash-ups on the exterior of Zeppelin Station. Due to the temporary nature of paper on outside surfaces, these two pieces, unfortunately, won’t make it to this year’s CRUSH in September.

Part of his style, aside from the celebrity hybridization and use of mixed and layered mediums, is his tagline “What if Art Ruled the World” which appears throughout his art in various ways. This starts to mean more when you realize he’s pasted images with this credo in New York, Los Angeles, Berlin, Stockholm and London, among other locales. But Stikki Peaches doesn’t confine himself to paper and glue — he finds joy in the chaos of mixed media including collage, acrylic paint, silkscreen and spray paint.

Never Forever, though housed inside an art gallery (which is then inside a fancy hotel), will remind viewers of the alleys and walls found in cities like Denver, where graffiti and street art commingle and dominate every surface. His mixed-media paintings will hold layers, like those graffitied walls, and might even transport you from the comfort of the art gallery to the gritty subculture in the streets.

Never Forever, a solo exhibition by Stikki Peaches will be on view at Station 16 Gallery Denver from May 9 to June 2. Station 16 is located inside The Source Hotel and Market Hall at 3330 Brighton Blvd. #203.