For the last five years, Station 16 has served as one of Canada’s foremost urban art galleries. Nestled in Montreal, the gallery spotlights artists who are primarily inspired by street art and graffiti. They also officially sponsor the MURAL Festival, a celebration in Canada— much like CRUSH in Denver — for muralists, street artists and graffiti. With the recent and continual growth of street art in Denver — including the expansion of CRUSH from two days to a week last year, and the ever-more-impressive roster of local and international artists painting murals — it’s no wonder that Station 16 eyed the city as a possible second home.

That possibility has quickly become a reality. Station 16 plans to set up shop at The Source Hotel market hall in the next few months, bringing with it an outstanding reputation in urban art circles. The Montreal gallery has hosted acclaimed artists like Stikki Peaches, Kevin Ledo, Mondo Marie and Denver’s own Jaime Molina.

Though they now exhibit artists in a gallery setting, their introduction to the urban art world came when they started as a screenprinting studio in 2008. Through their networking with local Montreal artists, they realized there was a vein of artistic expression that simply lacked exposure and, therefore, support. This led them to accept the mission to “exhibit works of art that challenge the traditional white cube gallery space.”

“Opening a new gallery is undoubtedly an exciting endeavor. Opening a new gallery at The Source Hotel, within the RiNo Art District… that takes it to another level for us,” founder of Station 16, Carlo De Luca, commented. His excitement should come as no surprise — RiNo’s new wave of artists flourish when presented with the task of challenging tradition.

The connection between the Montreal gallery and Denver’s The Source began when Kyle Zeppelin invited Station 16 to Denver for a pop-up exhibit in 2017 at the existing market hall. Internationally-acclaimed badass and anonymous street artist MissMe (who also calls Montreal home) came with the gallery to display a few prints. While she was here, she also wheatpasted large portraits of influential females throughout history into Comal Heritage Food Incubator. Word on the street also says she left some other wheatpastes around town, but we can neither confirm or deny that. 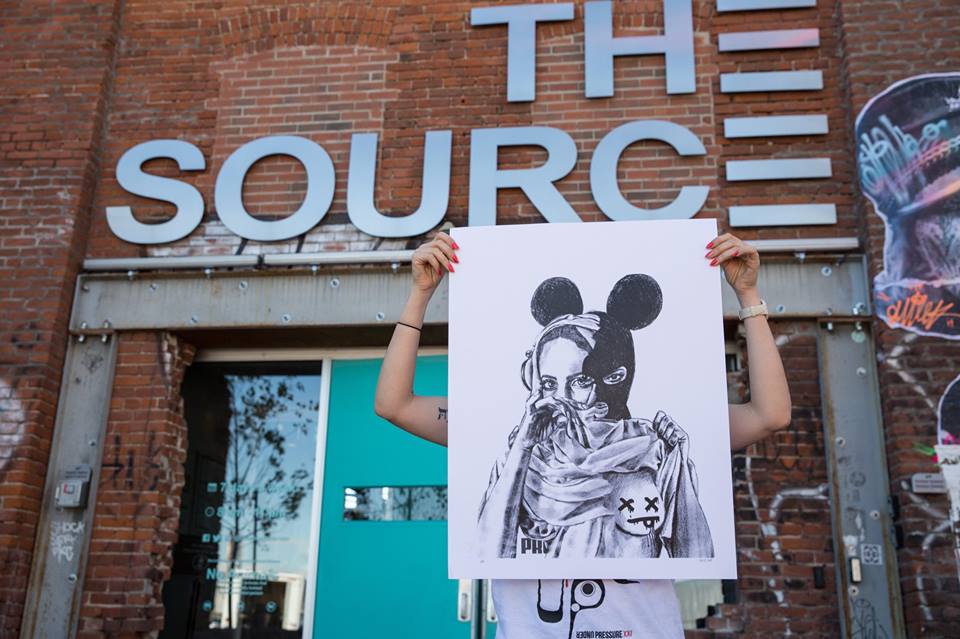 This pop-up — displayed in the open area near the entrance to The Source — served as a prelude to the plans for the permanent gallery that is now coming to fruition. “We felt a natural connection to the founding vision of The Source Hotel and to RiNo Art District’s focused arts vision, and are thrilled to be part of the community,” co-founders of Station 16 Adam Vieira and Emily Robertson explained. Station 16 will become one of more than 75 art galleries within Denver’s city limits.

So far, the lineup of artists to display work at the Denver location of Station 16 has yet to be revealed. But if we were to guess, they will have no trouble finding a glut of artists who fit their mission and their vibe — locally. And, because the Montreal gallery will continue showcasing and networking with international urban artists, we’d also guess that Denver can expect visits from some of those creatives as a result of this new Canadian-Coloradan connection.

For more information about the opening of Station 16’s second gallery in Denver, stay tuned to their website.