Montreal-based artist MissMe is internationally known for her pieces of artwork that explore race, gender, society and class while giving an explosive voice to the marginalized and repressed. MissMe is no ordinary artist. She considers herself an “artful vandal” because the majority of her artistic enterprises are illegal, though she occasionally crosses over to the legal side, as she did this past weekend at Denver’s Comal Heritage Food Incubator. As a self-proclaimed outlaw and vandal (we are not sure if MissMe currently has any arrest warrants out) it’s likely she has at least had close encounters with law enforcement.

She only produces legal art for a particular business when she agrees wholeheartedly with what they are representing, preferring the no-permission-needed tactics because it keeps her away from compromising on her artistic and political stances. As a feminist and activist for equal rights, MissMe decided easily to work with Comal because their focus on teaching women valuable skills to support themselves with enriching work aligned with her own beliefs.

Read: Chef Tim Bender and the Women of Comal

So MissMe traveled to Denver on an invitation just for the weekend, working late into the night to wheatpaste her hand-drawn images onto the interior and exterior of Comal. Wheatpasting (or “poster bombing”) is a brand of graffiti that has historically been used by activists and subculture groups to quickly paste flyers to walls. MissMe chooses this style because it allows her to quickly post large images that contain a high amount of detail in places that have steady pedestrian traffic, when she’s operating outside the boundaries of the law. Even if she chooses wheatpasting because of speed or because she hasn’t mastered a spray paint can, it’s symbolic that she would use the same technique as activists, propagandists and subculture participants with more political motives than traditional tag-style graffiti. Ultimately, she’s not just trying to make pretty pictures on walls, she has an agenda behind every one of her pieces. It’s a bonus that she’s a damn good artist with a pencil and paper. 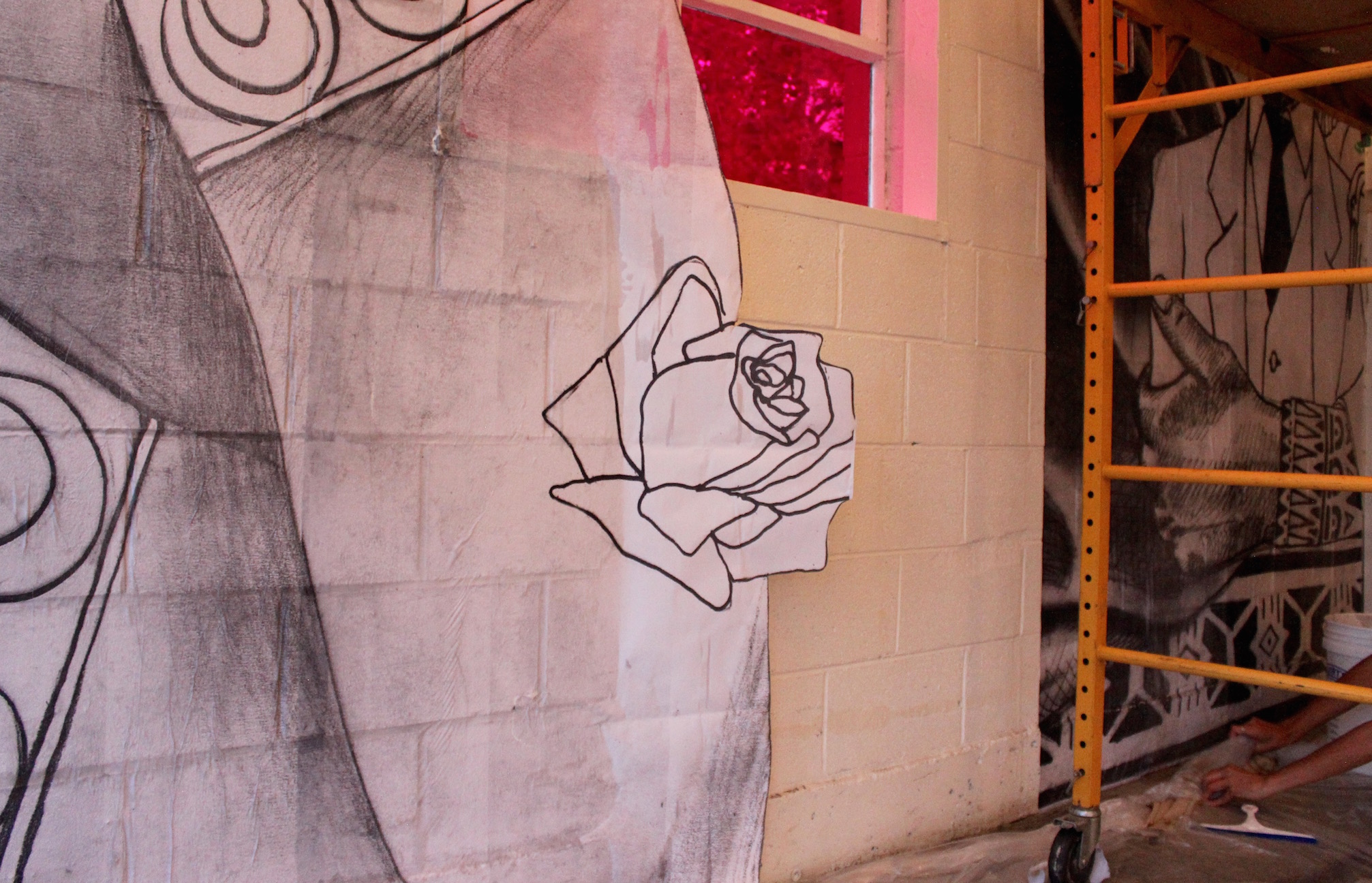 Detail of drawing and paper before it is wheatpasted to wall. Photo by Cori Anderson

MissMe’s installation at Comal is symbiotic with the mission behind the restaurant— that is, inspiring women to be the best they can in a world that sometimes shuns their competence and importance. It’s part of a continuing series for MissMe called Aspire to Inspire, where she draws great, influential women. “There is nothing I know as powerful and truly empowering as women helping, loving and supporting other women,” MissMe wrote on her website. Inside Comal, MissMe pasted her hand-drawn likenesses of Malala Yousafzai, Frida Kahlo, and Simone de Beauvoir, while on the outside she posted Maya Angelou. Helen Keller and Betty Friedan will complete the Aspire to Inspire series, but the details for the locations of those pieces have not yet been released. 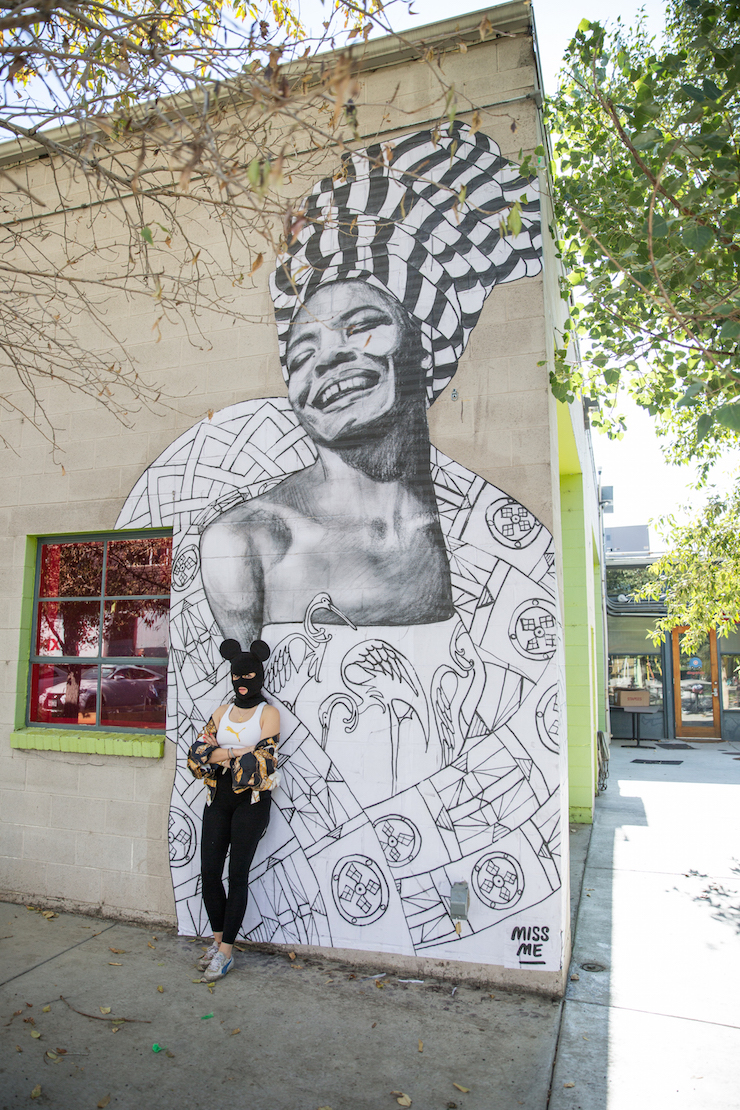 About the purpose of this series, MissMe commented:

“It’s an answer to young women who are aspiring to be Instagram stars. That is not something to aspire to become. It’s diminishing who you can be, and it’s ridiculous. But it’s also because that’s what everything around you, image-wise, points to. Most of my shit is in the streets, and I do that because you can’t beat algorithms, you can’t beat social media. But you can play into that. So to young women and girls, I say aspire to be much bigger than you are expecting to be. Aspire to be more than an Instagram picture. It’s cute. But if you think that’s your pinnacle, you don’t know enough about what other women have done in harder times. It’s a loss for society in general, not just a loss for women. If these women weren’t there, our whole society would be different.” 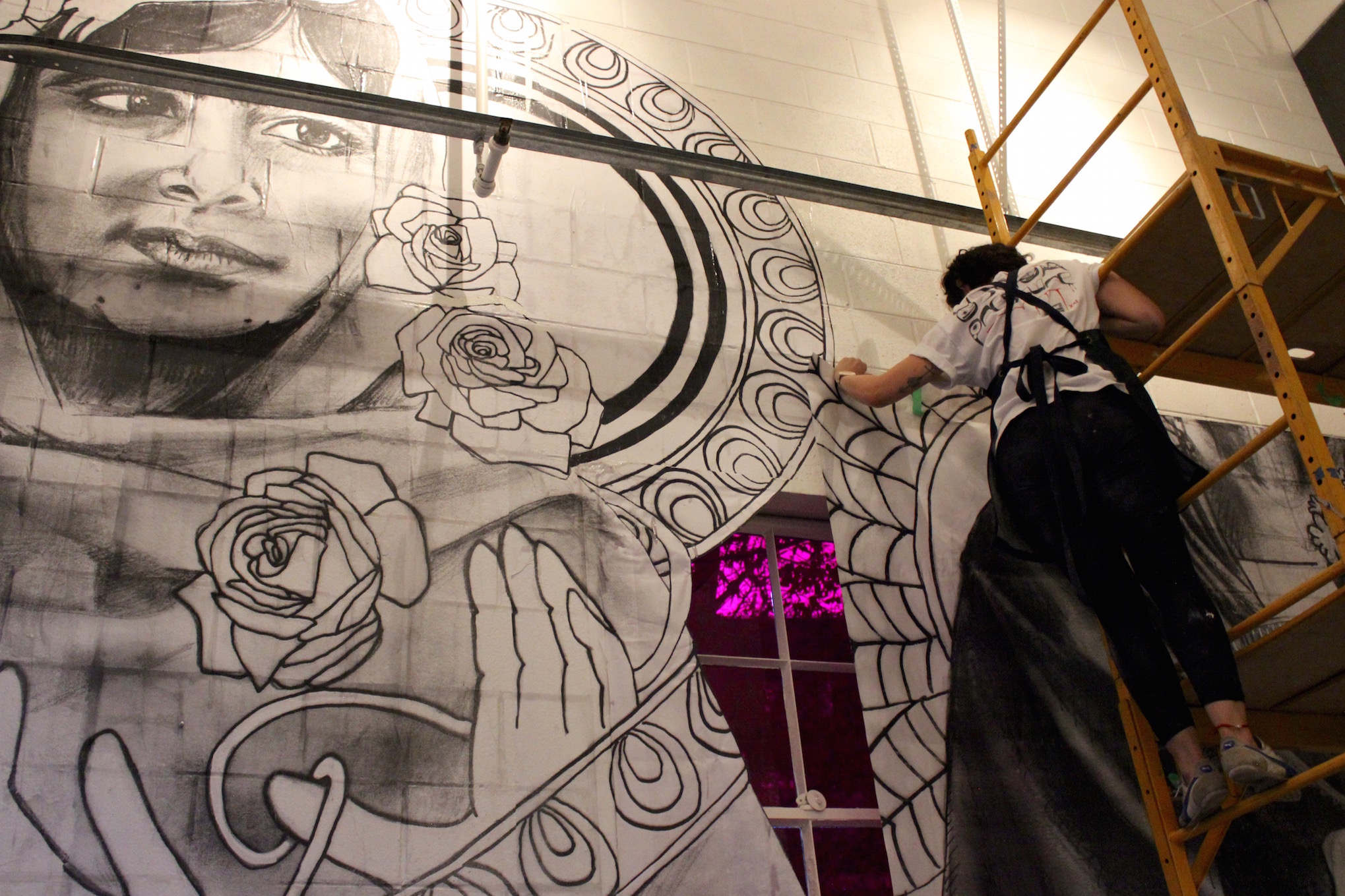 MissMe remains anonymous—even though she’s been interviewed by VICE and HuffPost—because she believes in the power of criminality when it comes from a place of good intention. She doesn’t plan on stopping her illegal poster bombing anytime soon and she’s been doing it successfully for six years now.

She explained, “I think it’s important to keep a balance in society by doing something illegal that isn’t necessarily harmful. But more than that, there’s something beautiful about using your own time and money to share something just for the sake of it. People understand and pick up on that because it’s the opposite of everything else— it’s the opposite of wanting to make money off something, just doing it for the idea and message. That’s a strong, powerful energy that humans share and connect through.”

And because curiosity was burning every fiber while watching her paste the larger-than-life women inside Comal, I had to know if she was planning on any illegal poster bombing in Denver during her short weekend stay. In response, she said, “I brought some stuff to put in your streets. Are you a clean city though? I feel like I’m going to put it up and have it taken down the next day. I’ll do it anyway though.” It’s that kind of unapologetic attitude that fuels MissMe’s art—an incentive that’s based in principles and not money or societal acceptance— and that sheer willpower is almost more powerful than the art itself.

For more information about MissMe, including images of illegal and legal posts around the world, visit her website.