Each spring, the Denver Botanic Gardens must prepare the grounds for the busy summer season. This flurry of activity includes draining the ponds, making repairs and curating an expansive sculpture exhibit. Although the last few years have featured a single artist’s work — last year it was Mike Whiting and the year before, Alexander Calder — this year the exhibit showcases 17 different sculptors. However, one of the common threads that ties everything together is that all of the pieces come from the collection of Craig Ponzio — a businessman and philanthropist with a highly developed taste in art. The other similarity is the mutual exploration of the human figure — though you’ll see everything from hyper-realism to highly abstract representations. 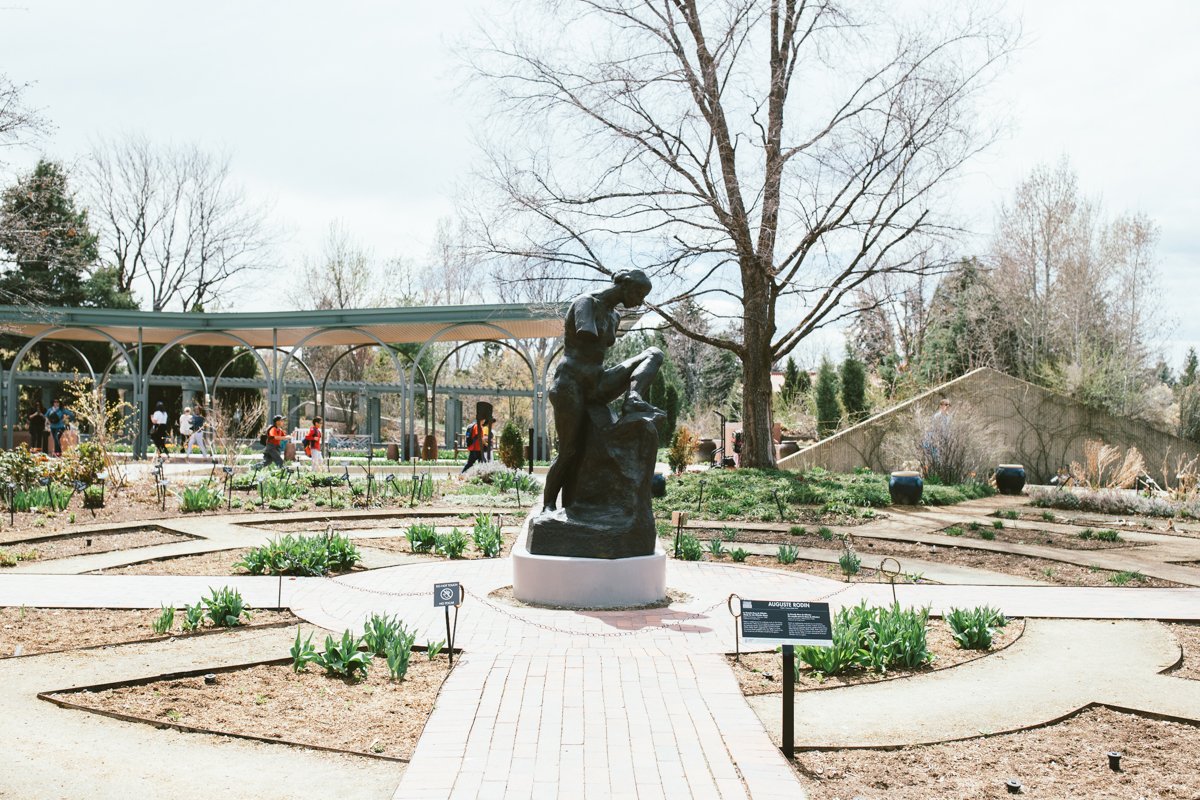 Called HUMAN/NATURE, the exhibition is on view from April 19 to September 15, 2019. Sculptures range in size — the smallest is two feet and the largest is around 10 — and vary in age, with some reaching back to the early 20th century. One of the sculptures is from the famous Auguste Rodin — most known for The Thinker — whereas others are by artists working today. Nearly all of them are made with bronze, so it’s good to take note of the different finishes (or patinas) which alter the finished appearance of the same base material. Ponzio doesn’t limit himself to only collecting sculptures — he recently donated 15 artworks to the collection of Colorado Academy — though his propensity for them is showcased beautifully in this collection at the Botanic Gardens. “Nothing reveals and enhances figurative sculpture like the color and beauty of nature,” said Ponzio. 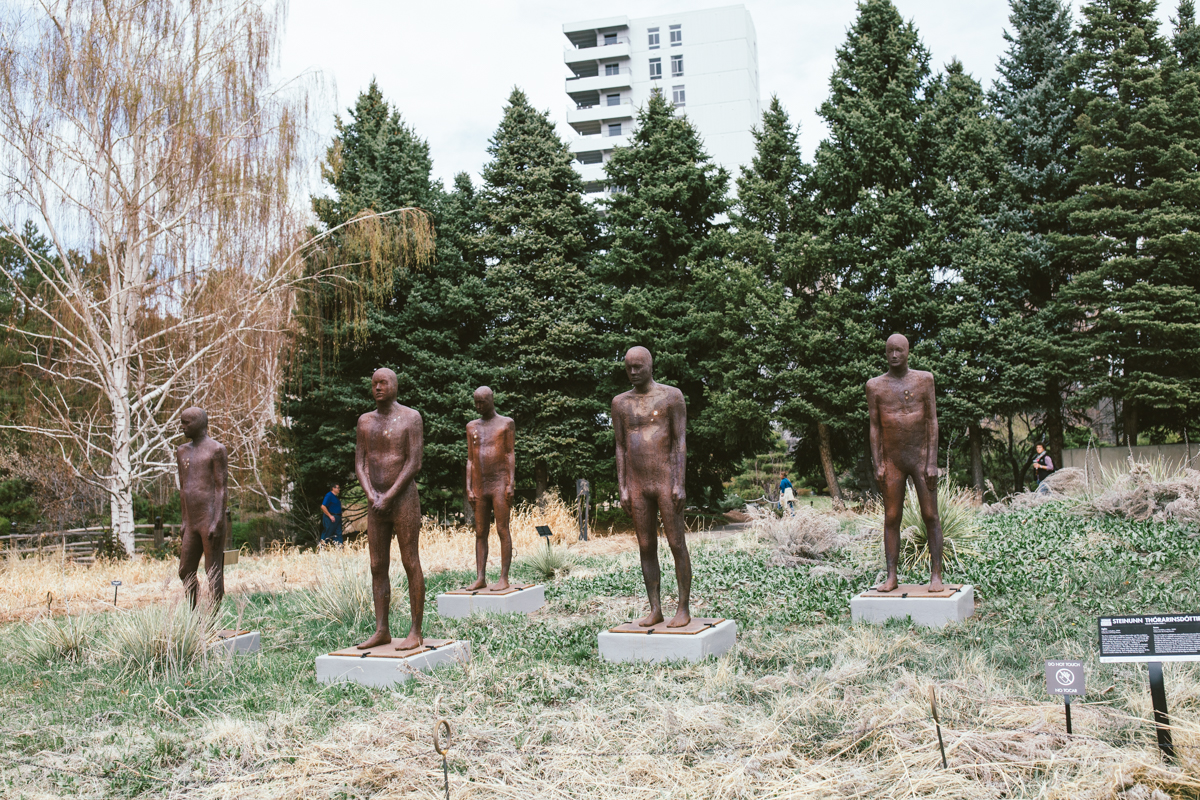 And that is certainly the case with many of the artworks nestled among the diverse ecosystems within the gardens. But the meaty part of this collection is that it is inclusive of all humanity — there are multiple pieces that deliberately skew the boundaries between race or gender, for instance. The best example of this is a group of figures standing in a meadow toward the back of the gardens, by Icelandic artist Steinunn Thórarinsdoóttir. Intentionally androgynous, the group stands facing one direction with neutral expressions. Though it feels a little creepy approaching them from behind, once you near them you’ll notice beams of glass in their chests that embodies the idea of light within each of us. At first impression, a collection of mostly bronze sculptures featuring the human body might sound dated, and so the discovery that each new sculpture you encounter is contemporary (in its openmindedness) is absolutely refreshing.

In that vein, it was no accident that the curators placed one of the oldest sculptures at the entrance to the grounds. Created by Émile-Antoine Bourdelle in 1912, La Grande Pénélope portrays a powerful female character in Greek legend, who kept her suitors at bay while her husband Odysseus was on his quest. In her expression and posture, she exudes a powerful fidelity and also a vulnerability. It’s wonderfully feminine and it highlights both the sculptor’s skill (he was a student of Rodin) as well as the reverence many feel toward the spirit of femininity. It sets the stage for the rest of the exhibit by making people look twice, partly because of its immensity and partly because it is such a loving ode to the power of human expression. 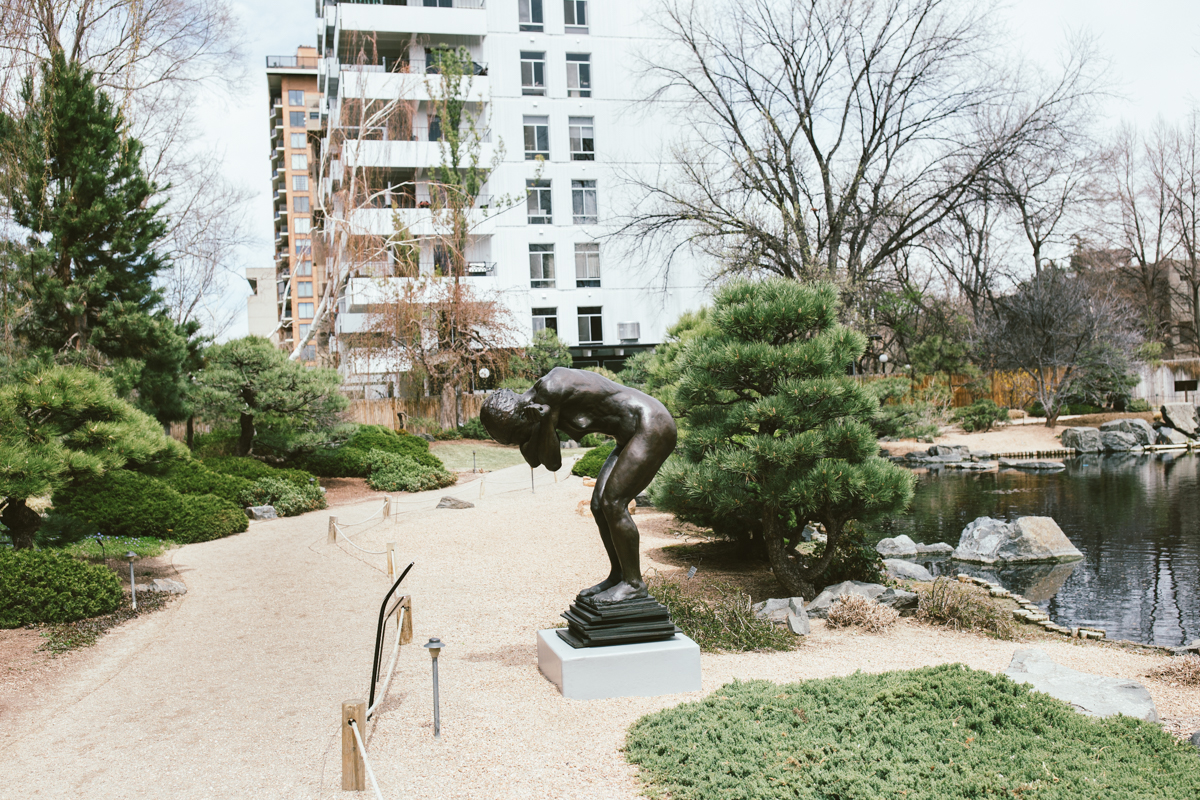 “The Weight” by Eric Fischl

Other sculptures that pivot on emotion in HUMAN/NATURE rely on a certain depth of detail, especially in the musculature and realism of the body. The Weight, by Eric Fischl, shows a woman partially crouched, covering part of her face with overlapping arms. Her life-like size gives an immediate reference point for the viewer, who might feel a compelling urge to comfort her. Another realistic sculpture, An Hour Before Dawn by Sassona Norton, uses a twisted posture, inviting the viewer to remember a time when their bodies contracted in catharsis.

Moving through the exhibit and the gardens, you’ll find more abstract or modern interpretations of the human figure in pieces from Peter Ambrose, Squire Broel, Joseph Csáky, Beverly Pepper, Jacques Lipchitz and Manolo Valdés. Pepper, who also has sculptures in front of the Denver Art Museum, contributed a smaller statue that loosely resembles a silhouette. Using an interesting tactic that results in a roughened texture, Pepper’s sculpture takes on the appearance of a rock, carved out by eons of rushing water. In the large monolithic pieces by Broel called The Guardians, the difference in texture between the top arrowhead-like tips and the roughened middle suggests the outline of a clothed body. The clever part about this collection is distilled in these abstract pieces because they need the context of their peers to feel relatable. And ultimately, each of the abstract ones speaks to our collective need to find familiarity in the unknown.

There are several sculptures in HUMAN/NATURE that highlight the human figure in relation to other human figures — specifically sets of two. These are special because they remind us of the importance of connection to other humans. In a few cases, these “couples” sculptures convey the significance of touch with the most minimal contact — a small detail that betrays the electrifying experience of skin-on-skin. Leon Bronstein’s Starry, Starry Night clearly uses this tactic, as the two figures press a specific portion of their backs against one another, and nothing else. This minimalistic approach succeeds in invoking that physical sensation within the viewer. Trust by local artist Kendra Fleischman engages the viewer into the narrative of a couple by illustrating a “trust fall” while also taking inspiration from the graceful movements of a dance. Fleischman provides a more idealized version of the human form, whereas Bronstein’s version might appear more like Hollywood aliens — both intoxicate the viewer with particular sensations of being human.

Allow at least an hour to stroll through this collection and the surrounding gardens, taking time to introduce yourself to each statue anew. Each has its own personality, its own story and deserves to be singularly appreciated — much like every person does as well. In that way, HUMAN/NATURE inspires us to harness our empathy and leave with a renewed sense of connectivity.

For more information and to purchase tickets in advance (this exhibition is included in general admission) go here.