–
In most cases, video games and nature don’t mix.

But California-based artist Mike Whiting and the Denver Botanic Gardens on York Street have curated a sculpture exhibition that proves otherwise. Pixelated — on view April 28 through September 23, 2018 — showcases 13 metal sculptures by Whiting in the design aesthetic of 8-bit vintage video games like “Pac-Man,” “Space Invaders,” “Donkey Kong” and “Galaga.” Spread throughout the gardens, these sculptures playfully hint at our complicated interactions with nature. This marks the first large-scale outdoor solo show for the artist, who grew up playing the games his art now finds much inspiration from.
– 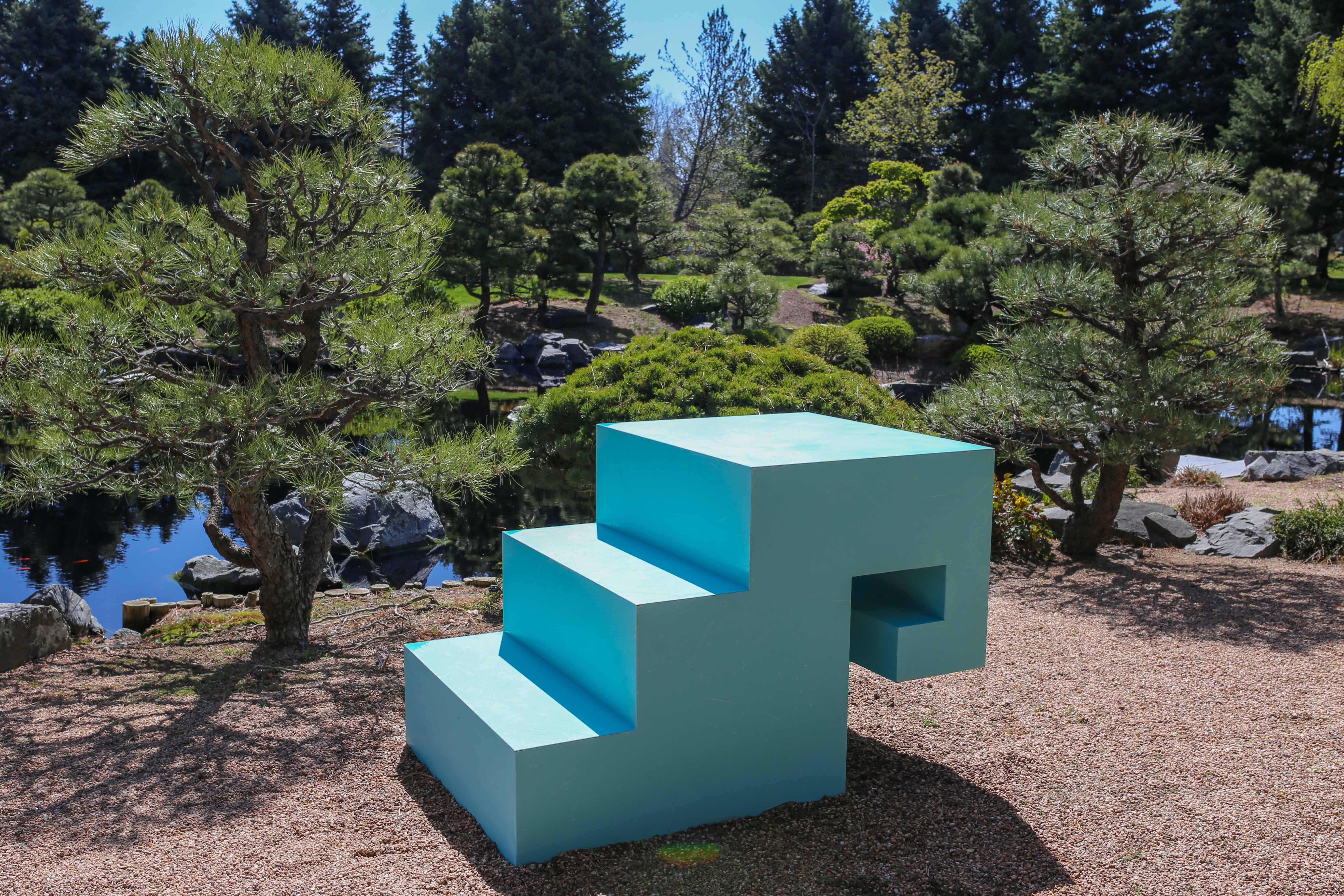 There is more to Whiting’s sculptures than a nostalgia of times gone. His adherence to the pixel-format comes from two sources — the technological limitations of those early video games and artistic minimalism. In artistic minimalism, artists specifically simplify objects, even if they are able to draw a photorealistic portrait. Programmers and coders in the early video games did not have the ability to create more detailed imagery which put constraints on how they could portray something.

For both modalities, the desire is to convey a complex idea with just a visual suggestion. Whiting takes these two different sources and mashes them together, fabricating brightly-colored metal sculptures that present both an uncomplicated image and a whirlwind of emotions. He uses the pixel-design as a tool for abstraction and a tool for construction at the same time.

Video games and minimalism also inform Whiting’s process. Before he begins to fabricate the sculptures, he uses retro programs to create the pixel-by-pixel representations. Then, using rolled sheets of metal, he flattens the metal, cuts out each part of the design and then welds those pieces together. After the construction, he then paints (usually with a single color) and distresses the paint with sandpaper, cinderblocks and other heavy-duty materials. 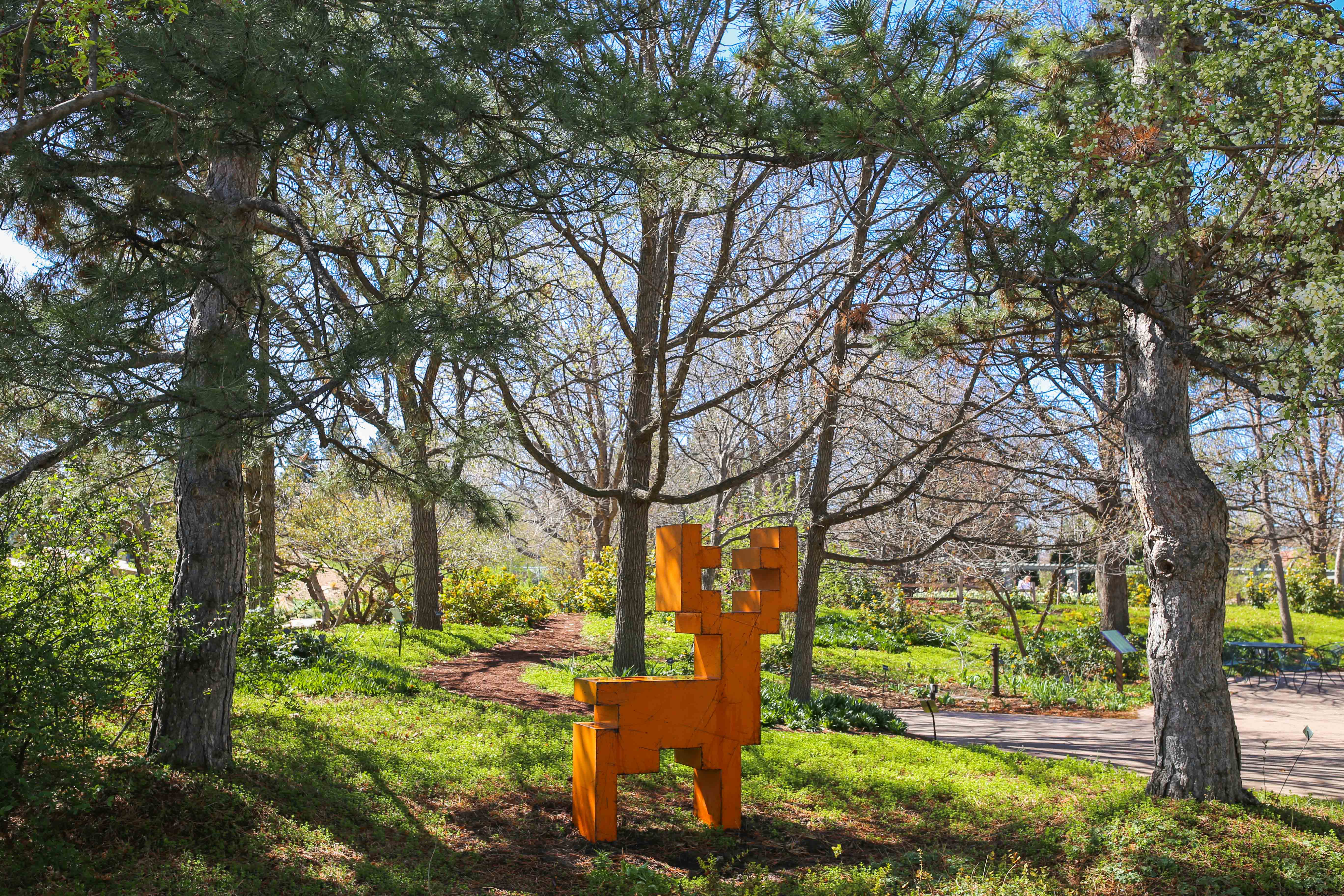 The distressing effect is essential to Whiting and his work because it gives each piece a sense of age. Because the sculptures harken to vintage games and images that those who grew up during the ’80s and ’90s feel familiar with, the idea is to highlight how long they’ve been around. Think about it this way — if you took the ghost out of “Pac-Man” when it was “born” and it lived in the real world, how would it look now?
–

READ: Old-Fashioned Arcade Near Denver Offers Nearly 400 Games from the 1930s to Now

–
This leads to another aspect of Whiting’s sculptures that make the Botanic Garden installation superb and fitting — the question of how urban environments interact with the natural world. The Botanic Garden exemplifies this interaction, with its 24-acre oasis in the middle of a busy residential area in Denver. It also serves as the perfect backdrop for Whiting to experiment with his subjects — something that may have contributed to him making four sculptures exclusively for the gardens and the exhibition. One of the new sculptures made this year for Pixelated is “Garden Gnome” — and yes, Whiting did that with a tongue in his cheek.

When visitors walk into the gardens, two large blocky sculptures greet them — “Ghost and Castle.” The ghost is from “Pac-Man” and the castle is from Super Mario Bros. Sitting side-by-side, the sculptures suddenly reveal their similarities (they are the same shape, but flipped) — a “visual palindrome” as Whiting remarked. This pairing epitomizes all of Whiting’s various inspirations — minimalism, 8-bit design, the aging process — while also sending most viewers down memory lane. After that, it’s easy to revert to a childlike wonder as you move through the gardens, hunting for more pixelated figures.

Pixelated isn’t the first time Whiting has shown work in Denver. Three of his sculptures already found a home in the RiNo district — a blue rhino and Pinkie and Mr. Green (two people facing each other, “frozen in eternal conversation” as Whiting explained). The urban style and structural sturdiness of those sculptures fit into the hip and changing neighborhood seamlessly. They also undergo some extra “abuse” in those locations, with graffiti tags and vandalism giving them more character. But that’s all part of Whiting’s work — putting these monuments to digital culture into spaces where they are tangible, and therefore relatable. 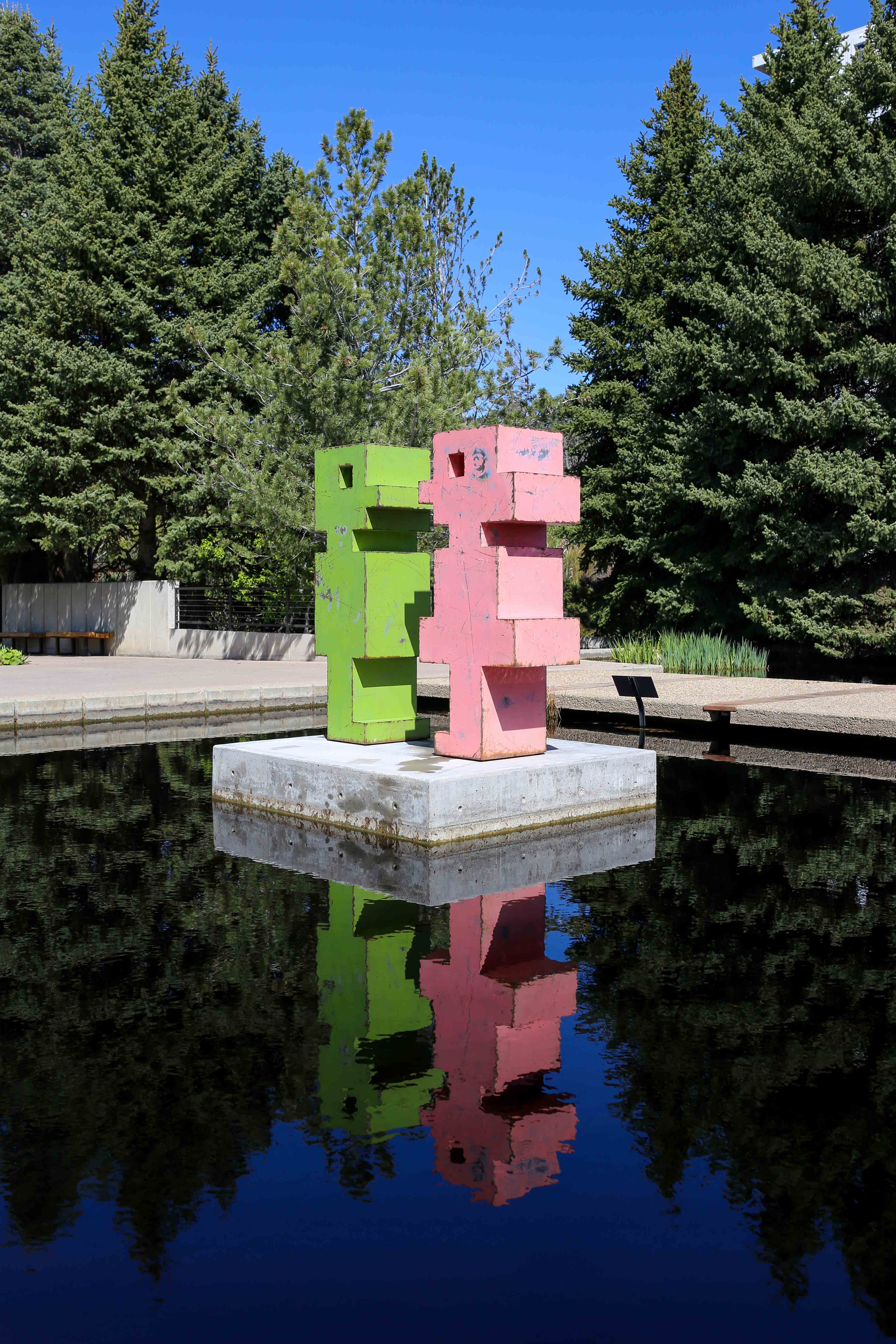 There is undoubtedly a surface-level enjoyment in these sculptures. You can appreciate them for their simplicity, their nostalgia-inducing subjects or the playfulness of their construction (we saw more than one child trying to climb on them). But you can also find a purposeful and driven narrative behind the sleek, straight sheets of metal. More than anything else, Whiting’s work proves that limitations are only obstacles when we allow them to be.

Pixelated is on view April 28 through September 23, 2018 at Denver Botanic Gardens, 1007 York Street. Admission is included with general admission pricing. Mike Whiting will be present at the gardens for an artist talk on June 6 from 6:30 to 8 p.m.