There are key moments in music history that all together manage to change the paradigm of music as a whole. The pairing of The Flaming Lips and the Colorado Symphony is one of those moments that people will recall with similar fondness as the band and orchestra took the audience through an array of emotions and wonder unparalleled through its merging of classical components and contemporary sonic splendor.

This pairing was not the first of its kind. The Flaming Lips and the Colorado Symphony played together at Red Rocks in 2016. That performance also included a reimagining of The Soft Bulletin, the band’s claim to fame, but contended with this performance a bit differently. Red Rocks is a palace of sorts  — holding the audience hostage with the pressure of being one of the most coveted and revered outdoor concert venues in the United States. Its energy is different and demands different manners. Boettcher Concert Hall is much smaller in size and lives in the heart of the Denver Performing Arts Center (DPAC). This fine art institution is harder to please. So The Flaming Lips stepped up their game and made an even better show.

Boettcher boasts a list of shows akin more to classical compositions than psychedelic rock — and yet, the venue choice was excruciatingly perfect. The Colorado Symphony’s conductor Christopher Dragon — who, of course, got a shoutout from Wayne Coyne himself for having the most badass last name — led the orchestra and choir with ease and often took over several of the band’s songs with their signed and sealed permission. Coyne would clasp his hands together and bow reverently whenever the classical instruments would pick up pace and volume. The Flaming Lips managed to echo their inviting energy into one of the most pristine locations for music in all of Denver and transformed any type of wariness into something so powerfully human that everyone in the audience couldn’t help standing up for ovations song-after-song, stomping their feet like mad with grins beyond grins on their faces. 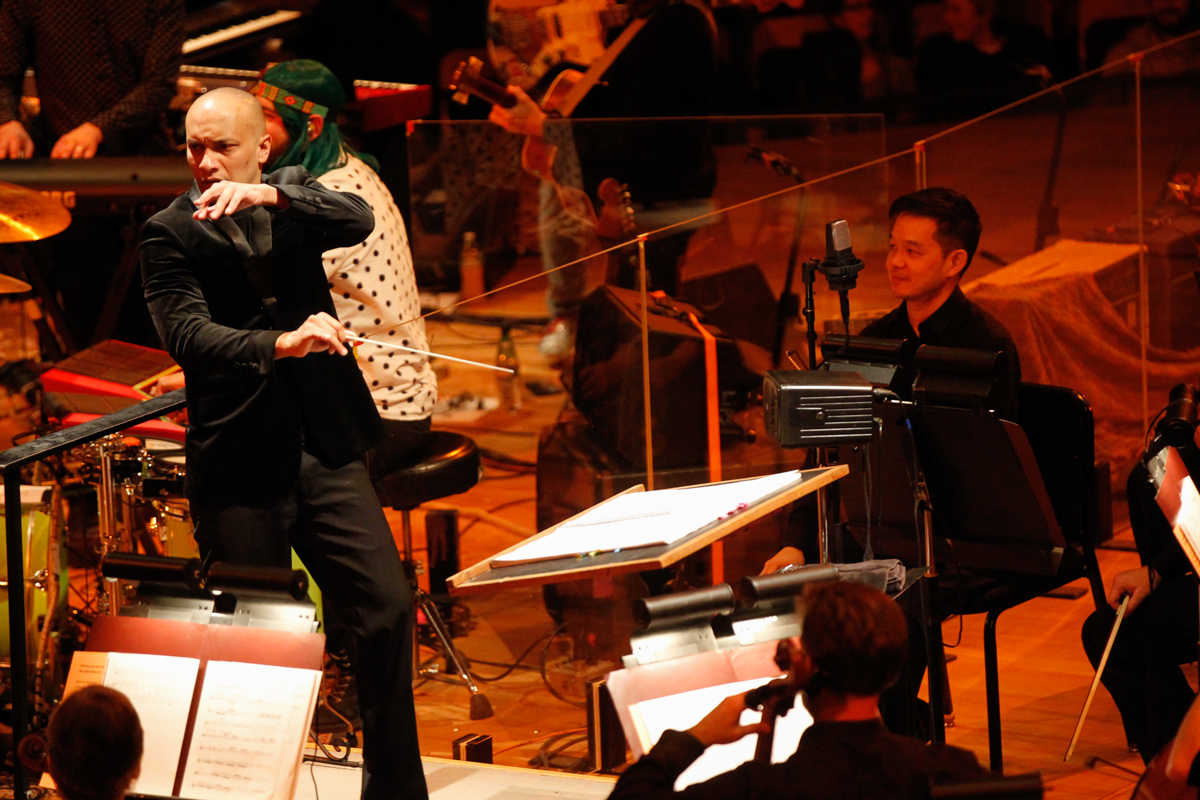 In true Flaming Lips fashion, the band walked in with the usual showmanship of their ethos. Both drummers wore their staple neon green wigs and juxtaposing the trumpet section was bassist Michael Ivins wearing an orange robe with LED glasses. As soon as the audience settled and Coyne made his first remarks about the marvel that is their experience with the Colorado Symphony, the band went into their frenzied tracklist of sonically-packed experiences. True to The Soft Bulletin song order, the first song of the night was “Race For The Prize” which introduced the orchestra and choir component flawlessly. “Buggin'” got the entire concert hall buzzing along as Coyne directed audience members to interact as much as they could, often shouting back responses to the fans outbursts. Other unforgettable moments include members of the choir walking along the rows of the hall chanting “Love” and handing out flowers to several audience members and an inflatable robot during the encore performance of “Yoshimi Battles the Pink Robots Pt. 1.” 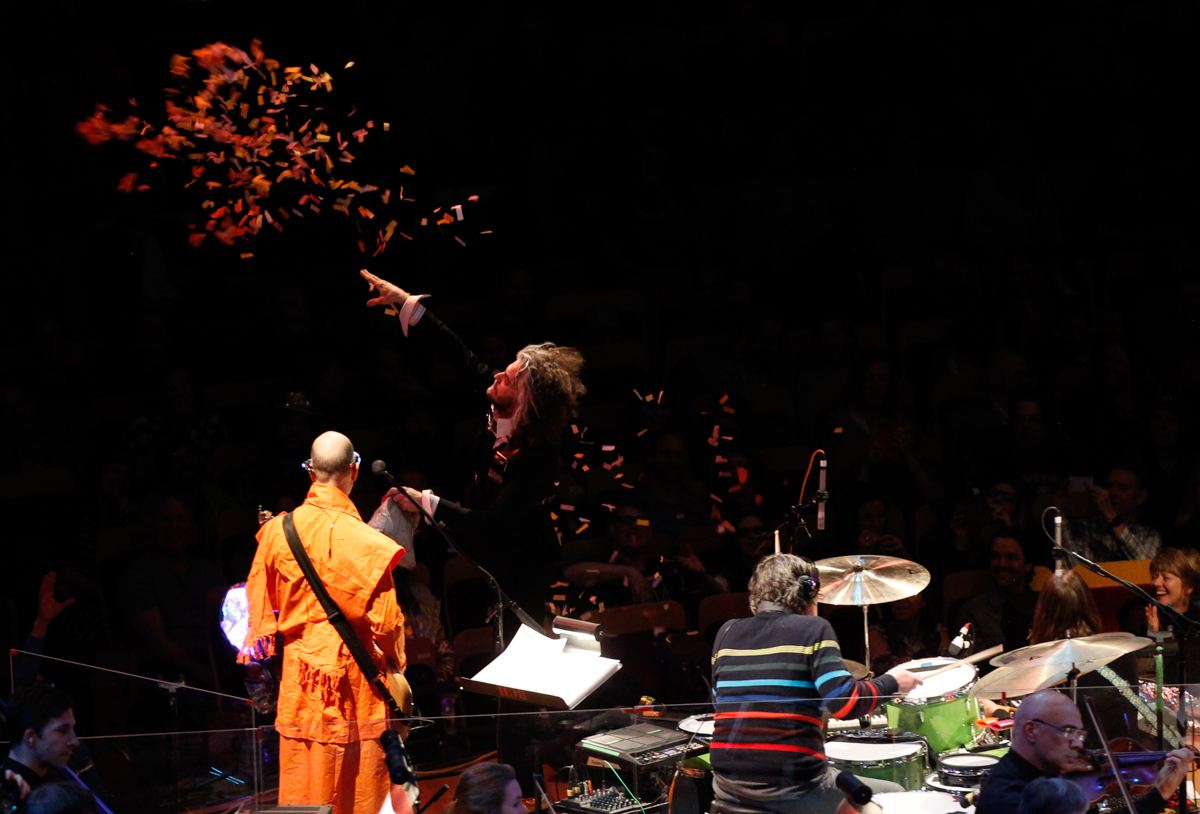 Photo by Brandon Marshall Courtesy of the Colorado Symphony

Although there were several highs throughout the night, “Suddenly Everything Has Changed” and “Waiting for Superman” took the lead. At the end of the former, the concert hall held itself in one looming breath as the orchestra developed into layers of complex compositions, forming this compressed form of urgency that had Dragon physically shaking as he directed the different sections. It felt as though there was this invisible string attached to everyone’s ribcage as they gripped on through the ride of that song. When the orchestra peaked there was a collective breath finally escaping the chambers of everyone’s chest and the roaring of the applause was enough to know that it wasn’t just a fluke. The audience knew as much as all of the performers did that there was a connection there beyond words.

“Waitin’ For Superman” was a somber moment for Coyne specifically as he maneuvered through the song. The choir joined in to echo the words “‘Cause it’s gettin’ heavy/Well, I thought it was already as heavy/As can be” while Coyne’s voice broke with the weight of the words he sang. It was a chance to lift someone up as they admitted to the sensitivities of the world and the overwhelming sadness that sometimes overcomes what we cannot change. Coyne asked for help and the audience obliged, showering the band with applause as they stood silently admitting their defeat at wrangling in the complex feelings that sometimes take over our hearts.

The night was not just a concert. The Flaming Lips invited the audience into their most prized moments of life and showed everyone what a fusion of music can mean if it hits the right target. To perfectly capture the evening, as the band walked away after the encore performance, Nick Ley walked right into the arms of two young children who bounced out of their seats to greet the drummer with what can only be assumed is a familial connection. The children held his hand as he walked off the stage. It was so far off to the right and so many people were starting to shuffle out of the theater, that the organic moment was almost lost within the folds of everything else around. Nonetheless, peering into that snapshot of everyday love and life proved more deeply that there is nothing but raw moments within the scope of this performance and we were all lucky to behold it.