Jewish Food in Denver and the Delis That Built It

Every minority in the US is proud of its cuisine, but for Jews, food is a defining feature. While discussions of spirituality are mostly reserved for a Passover Seder or the Shabbos table, day-to-day arguments, and jokes pair best with a half-sour and a Reuben at the local deli. 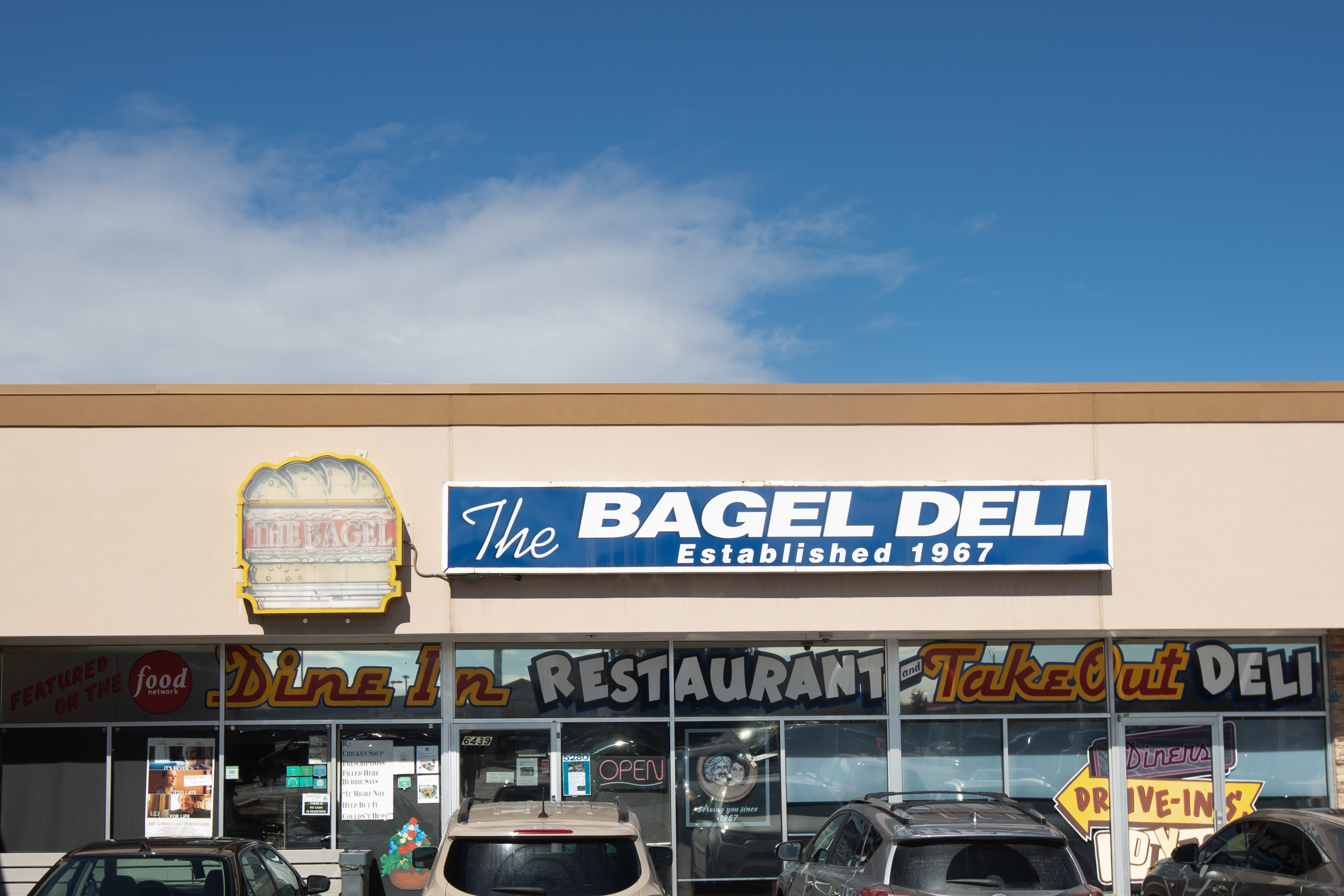 For decades, The Bagel Deli, Zaidy’s Deli, and the New York Deli News were the only places to get Ashkenazi food in Denver. These were the places members of the Mile Chai Club (a slang term for Denver Jews, chai is Hebrew for life) would go to have a nosh and coordinate the next bar mitzvah or ski trip.

The Bagel Deli has been around for a while. In 1967, Austrian immigrants Paul and Lola Weiner opened The Bagel Deli at its original location on 14th and Krameria. A few years later the Weiners moved the deli to its current location just east of the highway on Hampden in 1971. In 1973, they passed the reins to their daughter and son-in-law, Rhoda and Joe Kaplan, who, along with their son Jared, own and operate this Denver institution to this day.

When you walk in, The Bagel Deli seems more like a grocer than a restaurant. There is a long counter where employees are weighing out portions of chopped liver or giving samples of cured fish to curious customers. The display cases are organized from sweet to savory, with a row of pickles separating rugelach, babka, and strudel on one side, from lox, pastrami, and kishka on the other. Turn around and you will find a wall of matzo and challah, flanked on either side by two refrigerators; one offering various soups and doughs to be heated at home, the other filled with beers, juices, and sodas, including the master of Jewish beverages: Dr. Brown’s.

Dr. Brown’s soda doesn’t get a lot of attention in mainstream American culture, but in a Jewish deli this symphony of bubbles, odd flavors, and high-fructose corn syrup is essential. Deli food just isn’t deli food without a can of Dr. Brown’s black cherry, cream soda, ginger ale, or their iconic celery seed flavored Cel-Ray soda.

On the other side of the great wall of matzo, lies The Bagel Deli’s meat and potatoes (or brisket and latkes, in Jewish), the dining room. It is a place where groups of diners young and old gather throughout the day, projecting an air of comfort and familiarity that says they have been coming here for a while. From the daybreak arrival of “The Boys” — a group of rough, tough, nogoodnik, rapscallions in their eighties who have been coming to the deli every morning for none-of-your-business-how-long– until the last customers to leave at night, it seems like everybody eating in The Bagel Deli is a personal friend of the Kaplans and the rest of the staff. It is no surprise that first-timers quickly become regulars.

At one of the scariest times in our nation’s history, people left the security of their homes for a bowl of prescription-strength matzo ball soup and the warm embrace of The Bagel Deli. If that’s not comfort food, nothing is.

“It’s heimish (Yiddish for home-like),” said Joe, “and people have a feeling when they walk in here, because they know that if they talk to [us], they feel like they are coming into bubbie’s (Yiddish for grandma) house or mom and dad’s house. It feels comfortable.”

After 9/11, Joe recalls, people didn’t feel safe leaving the house. Restaurants across the country were struggling to keep the lights on. But not The Bagel Deli.

“We stayed busy,” Joe remembers, “people came here in droves… I was stunned how busy we were.”

At one of the scariest times in our nation’s history, people left the security of their homes for a bowl of prescription-strength matzo ball soup and the warm embrace of The Bagel Deli. If that’s not comfort food, nothing is.

Sentiments aside, The Bagel Deli could stand firmly on their menu alone. They serve breakfast all day, offering traditional favorites like matzo brei (almost like French toast, but with crumbled matzo instead of bread), lox, eggs, and onions (aka, a Leo), and an array of bagel sandwiches served on Moe’s Bagels with home whipped cream cheese. Their breakfasts are great, but it is lunch/ dinner this place is known for. A few years ago, The Bagel Deli’s matzo ball soup, knishes, kishka, and more even landed them an episode of Guy Fieri’s Food Network series Diners, Drive-Ins and Dives.

The Bagel Deli is more than an authentic representation of a Jewish deli, they are the real deal. A few exits south of downtown is a world of cured fish, smoked meats, and other exciting flavors. Customers should come ready to discover their new favorite, hard to pronounce food.

About 20 minutes north, in Cherry Creek, is Zaidy’s Deli. For the past 33 years, Zaidy’s (zaidy is Yiddish for grandpa) has been owned and operated by founder Gerard Rudofsky. Rudofsky opened the original Zaidy’s deli on 14th street across from the capital in 1985. He and his then business partner served Jewish and Italian fare to politicians, lawyers, jurors and anybody else hanging around Cap Hill in need of a sandwich. A few years later Rudofsky and his partner parted ways (the two are still friends today, their families share a Jewish/ Italian Christmas every year) and Zaidy’s moved to 1st and Adams, where it sits today. 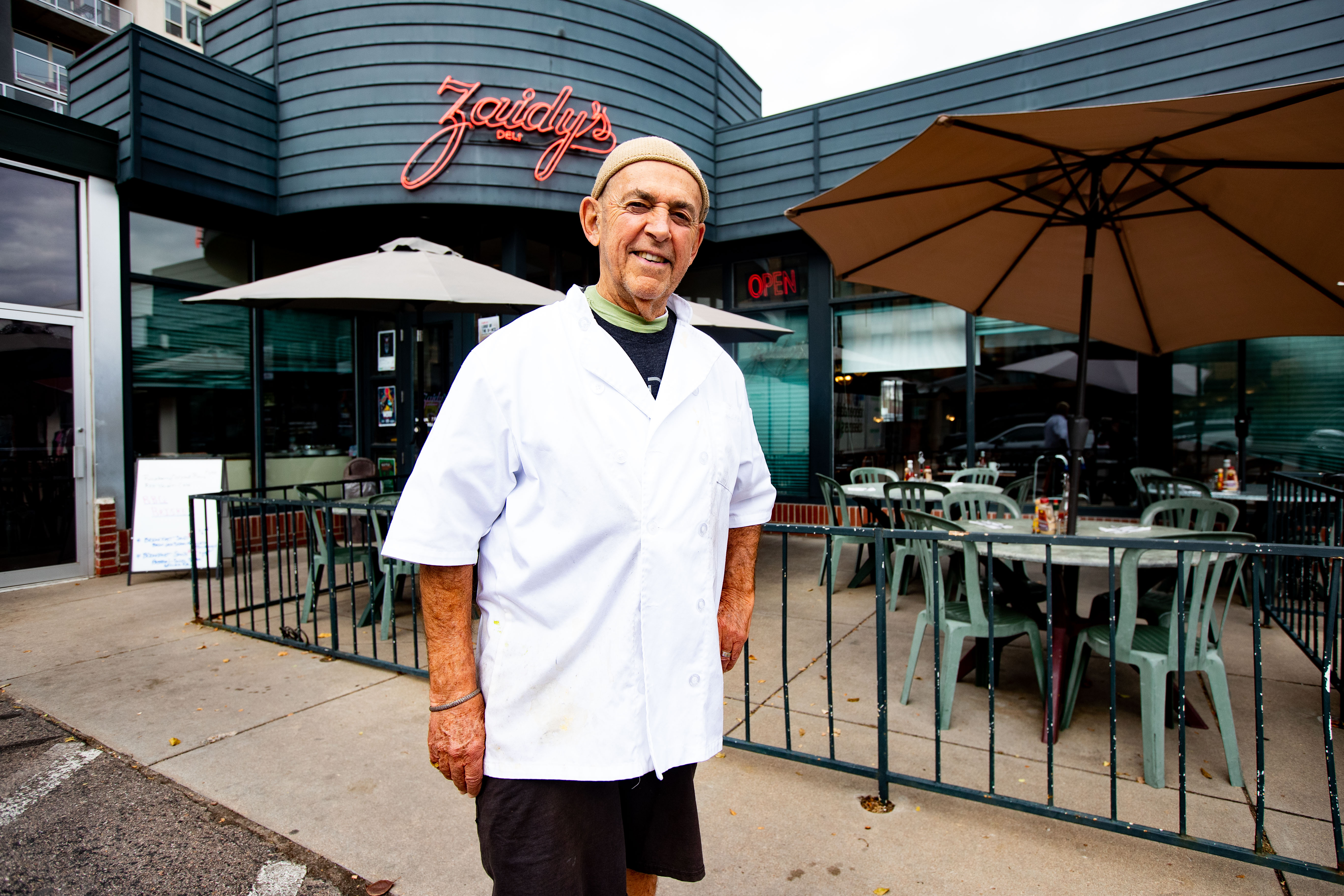 Zaidy’s Deli started out serving everything you would expect from such a restaurant, but, as they years passed, the menu began to grow. A restaurant is like an artist, Rudofsky believes, “you have to keep changing and making it interesting.” In his seventies, wearing an earring and popped collar, Rudofsky knows a thing or two about “making it interesting.” Some menu items, like the Desayuno Fuerte, combine Jewish tastes with Colorado’s Southwestern roots. Zaidy’s Desayuno Fuerte is a medley of tomato, onion, garlic, and spinach, topped with two poached eggs and cheese served on a latke. This 1st Avenue favorite likes to keep you on your toes; it’s the kind of place where a table can order fish and chips for one person and chopped liver with tongue for another.

One of the highlights of Zaidy’s Deli is their desserts. Made fresh by Zaidy’s in-house pastry chef, the desserts, in the words of one of Zaidy’s waiters, “taste the way desserts are supposed to.” Zaidy’s orange chocolate coffee cake is impossibly dense and moist with a crunchy, sugary outer crust. This old-school haunt checks all the boxes of a no-nonsense Jewish deli: good food, fast service, and an ambiance that feels more Lower East Side than Cherry Creek.

For most of Colorado’s history, Jewish food was hardly seen outside of a small colony on the West side of town. On Friday’s, the Goldstein’s used to leave the oven on at the bakery they owned, letting people drop off their cholent (a traditional stew, slow-cooked for 12 hours to be eaten by Jews on the sabbath, when cooking is forbidden) so the community could have a hot meal the next day. Colorado’s kosher cuisine was little more than a scrumptious secret until 1967 when The Bagel Deli first opened their doors.

Over the following years The Bagel Deli, Zaidy’s Deli, and The New York Deli News (who declined an interview) introduced a host of new dishes and flavors to diners across the Front Range.  These beloved eateries are the matriarchs and patriarchs of their community. Show some respect to your elders; stop by, treat yourself to a nosh, and bask in the sumptuous wisdom of their years.