Review – Mountain Sun Jammed Out For Its 25th Birthday

While a significant amount of the Front Range’s music-loving crowd was busy with the inaugural three-day Grandoozy Festival this past weekend, much of Colorado’s hippie population found itself tucked away alongside the Saint Vrain Creek for the 25th Anniversary of Mountain Sun Pub & Brewery. Friday and Saturday at Planet Bluegrass in Lyons was a hippie music mecca, boasting a two-day lineup of Colorado’s most talented jam, bluegrass and funk musicians.

The relationship between the crews at Mountain Sun and Planet Bluegrass goes way back, and it was only natural that the venue would help out their long-time friends and host a raging birthday party for the pub & brewery. Planet Bluegrass, whose main stage is located along the Saint Vrain Creek and is nestled amongst breathtaking Rocky Mountain scenery, was the visual parallel to two nights of incredible music that we bore witness to. 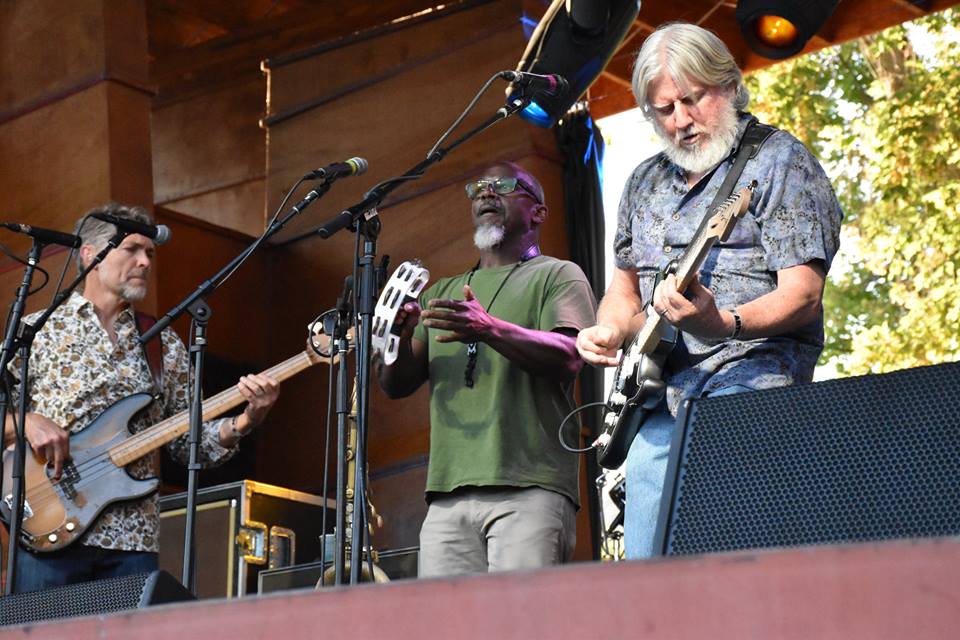 Friday evening’s music started just before sunset with an impressive lineup of folks, which consisted of five of the six members of the String Cheese Incident, The Motet’s Lyle Divinsky, Jennifer Hartswick of the Trey Anastasio Band and saxophonist Karl Denson. Needless to say, the roughly one-hour-and 10-minute set was a once-in-a-lifetime performance. Though the show was a highlight in and of itself, the highest points included covers of the Allman Brothers’ “One Way Out,” Jerry Garcia’s “Tore Up” and an ode to the late Aretha Franklin, “Chain of Fools.”

String Cheese Incident originals were sprinkled throughout the set, and for “Born On the Wrong Planet” they had the help of Liza Oxnard, who was part of the creation of the beloved over-20-year-old tune. Oxnard stayed on to help the rest with the Rolling Stones’ “Brown Sugar,” an epic finish led by Denson, made even more special seeing as he recently came off touring with the Stones themselves. 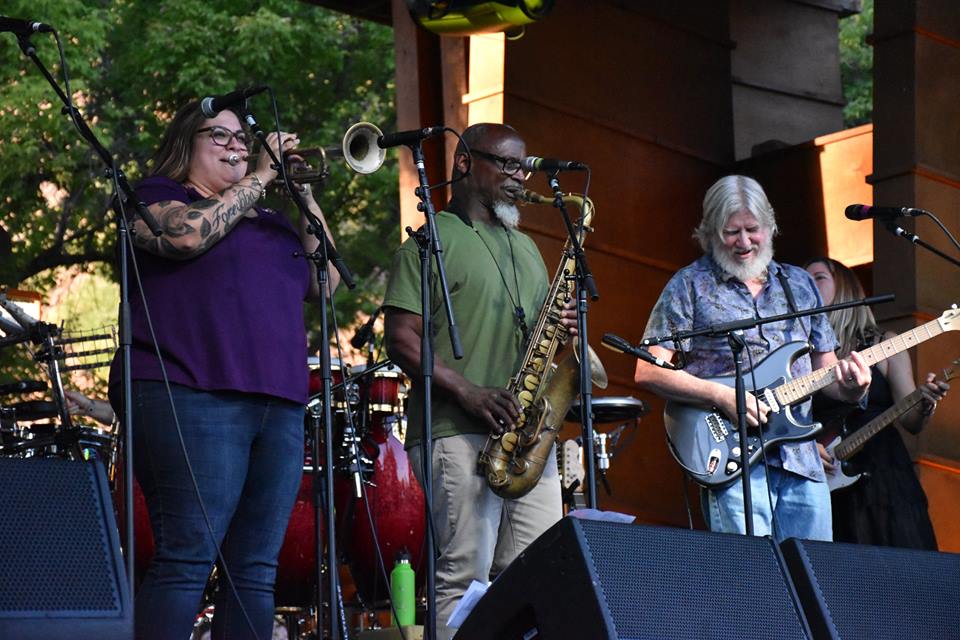 Friday night after dark saw two sets of the Motet, Boulder’s best funk band that has taken the genre by storm and been representing the Colorado music scene at shows and festivals across the country. Despite some membership change in recent years, the Motet has found their footing and is stronger than ever. Led by newest addition and frontman Divinsky and backed by drummer Dave Watts, keyboardist Joey Porter and the rest closed out Friday night with a bang.

Saturday kicked off early in the afternoon with some cowboy rock from the Drunken Hearts, led by Andrew McConathy on vocals and acoustic guitar. The Hearts’ performances are consistently on point, and during the short set we were treated to a number of great tunes, like “Black Snake,” from their latest album The Prize, and “I Want You Back.” Despite the surprisingly scorching autumn sun, McConathy and his band brought the heat as their fans danced and splashed in the cool creek water.

Yonder Mountain String Band, which some would call the most beloved bluegrass band to come from our great home state, really got things going in the mid-afternoon with oldies, new tunes and everything in between. The band brought classics like “Left Me In a Hole” and “Criminal” in full force to an exponentially growing crowd, and blew us away with their rendition of the Steve Miller Band’s “Jet Airliner.” Bluegrass junkies rejoiced as the five-some closed it out with a rowdy “Traffic Jam.” 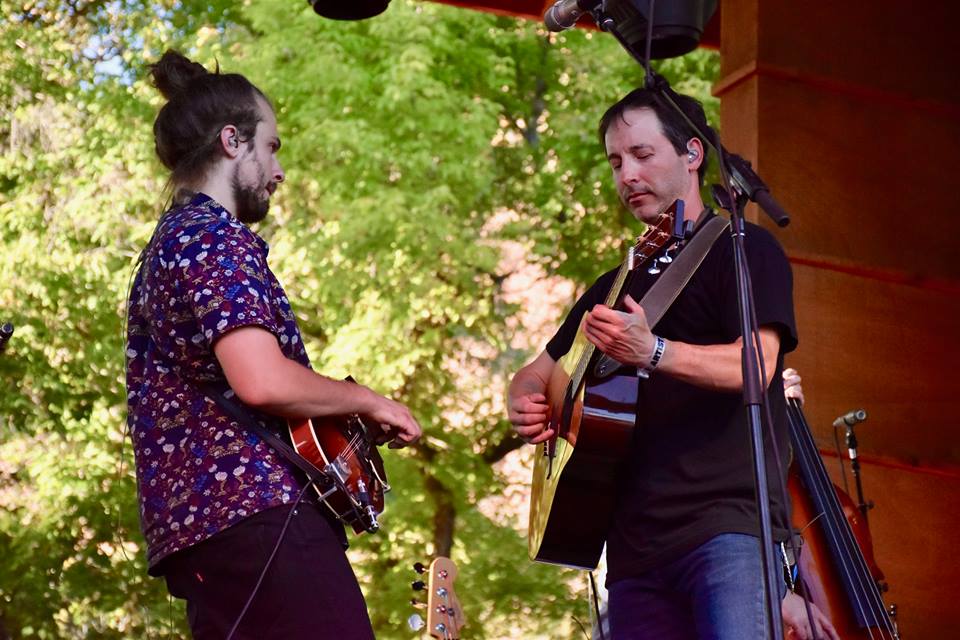 Between Friday morning and Saturday night — when it came time for the String Cheese Incident to take the stage — attendance at the festival nearly tripled. The six-man jam band that has been going strong for over two decades and shows no signs of stopping gave an unforgettable performance that left us in a state of total euphoria. The first set began at sunset and saw a whole lot of jamming, including “Rivertrance” and “Black and White,” and finished with fan favorite “‘Round The Wheel.”

The music only got better with the second set, which saw covers of the Grateful Dead’s “I Know You Rider,” Bob Marley’s “Stir It Up” and Hugh Masekela’s instrumental “Grazing In The Grass,” which the band had not played since 2004. Trumpeter Jennifer Hartswick sat in from that point on and killed it on the Talking Heads’ “This Must Be The Place (Naive Melody)” and an encore of Michael Jackson’s “Shake Your Body (Down To The Ground).”

To cure the blues from a weekend of extraordinary music coming to its close, Envy Alo played a late night set of funky cover tunes, like Jerry Garcia’s “That’s What Love Will Make You Do,” Jamiroquai’s “Cosmic Girl” and The Beatles’ “Come Together.” However, all great things eventually come to an end, and one can only hope that in another five years we might be lucky enough to witness a Mountain Sun 30th anniversary celebration that will some way, somehow top its 25th.

All photography by Larry Fox