Staff Picks – The 11 Best Performances We Saw at Grandoozy

Denver’s new massive three-day music festival concluded on Sunday night with the legendary Stevie Wonder. Attendees of the festival departed the Overland Park Golf Course with full hearts and sore legs. And now — as we look back on Grandoozy — we can’t help but reminisce in the good times and the stellar performances stacked throughout the weekend. Some musicians satisfied and others, well, didn’t make the cut. Headliner Kendrick Lamar and rising star Sturgill Simpson — two highly anticipated shows — received mixed reviews from fans while undercards like Black Puma and St. Vincent were the names bounced around as standout performances. The ‘80s Ski Lodge was a perfect retreat if at any point in the weekend one may have had a break in the schedule and wanted to dance — or just get some shade. One could even say the ’80s Ski Lodge — all performances combined — was one of the best shows of the weekend, continuously sporting a variety of Denver DJs and more throughout the weekend. Though we can’t include the entire Ski Lodge lineup, check out our 11 favorite Grandoozy performances below.

READ: Review – Grandoozy Pulled it Off

If you were fortunate enough to have wandered into Grandoozy early Sunday afternoon, you got to witness the scorching ferocity of Austin, Texas-based Black Pumas. A psychedelic haze of bluesy soul music, Black Pumas had the Rock Stage getting down beneath the brutal sun. A big portion of their breakthrough performance is owed to singer Eric Burton, whose voice, upon first listen dropped jaws clear round the festival. No hyperbole intended, he was simply that talented. Not to mention, Burton and band had an untamed and electrifying stage presence that downright commanded the stage. If that’s not a good first impression, I don’t know what is. – Kori Hazel 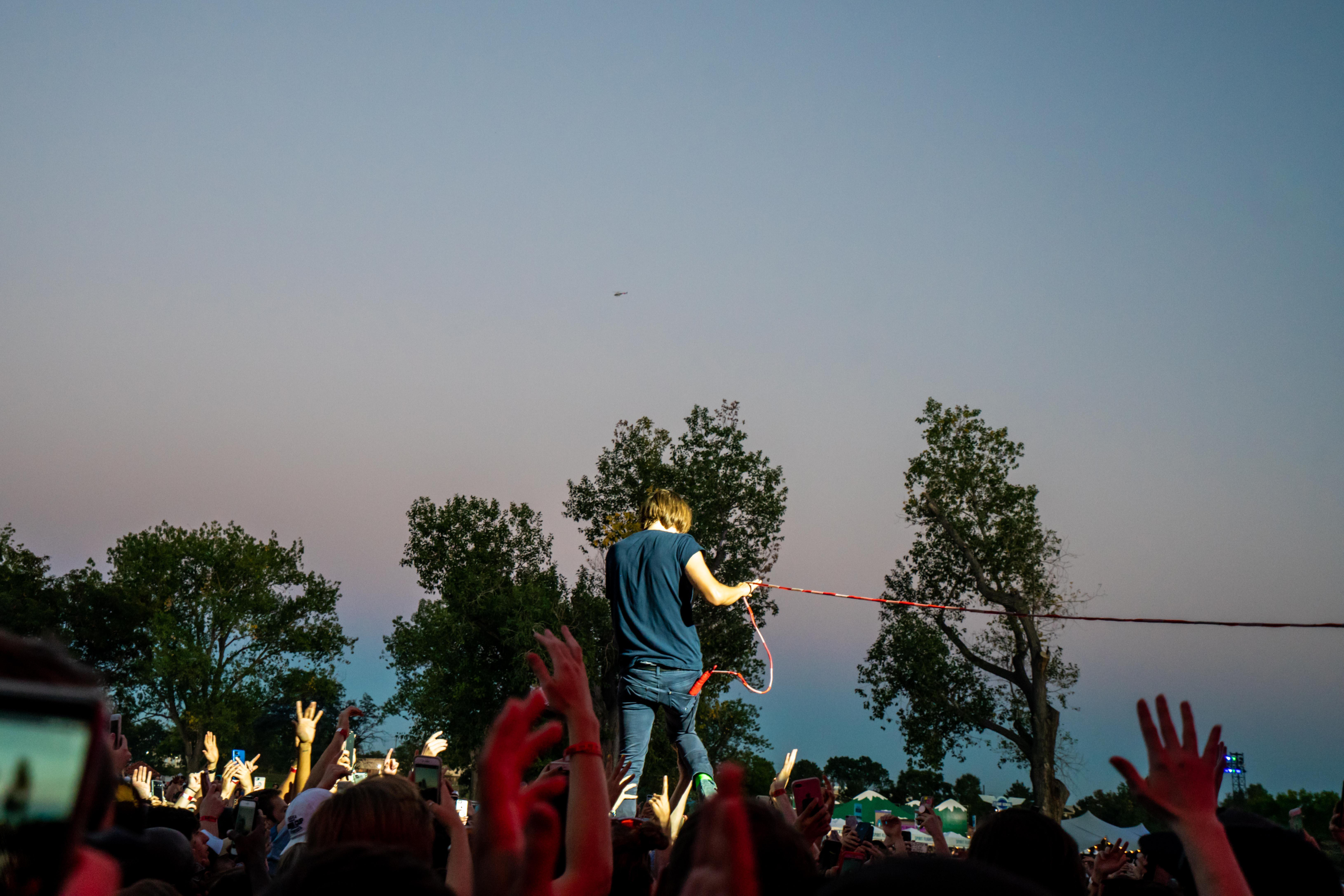 If you’ve seen Phoenix before, you know that the Paris group could never possibly let you down during a live performance. They pack in a stacked setlist, provide colorful and fun lighting and have an energetic stage presence — and their Grandoozy performance was no exception. In usual fashion, frontman Thomas Mars ran into the crowd for a song, inducing chaos. Though we would argue the show was exactly what we expected, we expected nothing less than incredible. – Tyler Harvey

Grandoozy hit the ground running and began Friday night with some of the best talent. Through all the highs and lows of the festival’s first year, Miguel was among the highest. The “Pineapple Skies” singer sang both new and old songs all while dancing around on the stage, never skipping a beat or missing a note. But what stood out most of all from Miguel’s show wasn’t his performance at Grandoozy, but his after-party performance at NATIV Hotel in downtown Denver. Of all the artists at Grandoozy, Miguel was among the few — if not the only one — that paid tribute to Denver and offered a free and intimate live performance after the festival’s conclusion. – Katie Boudreau 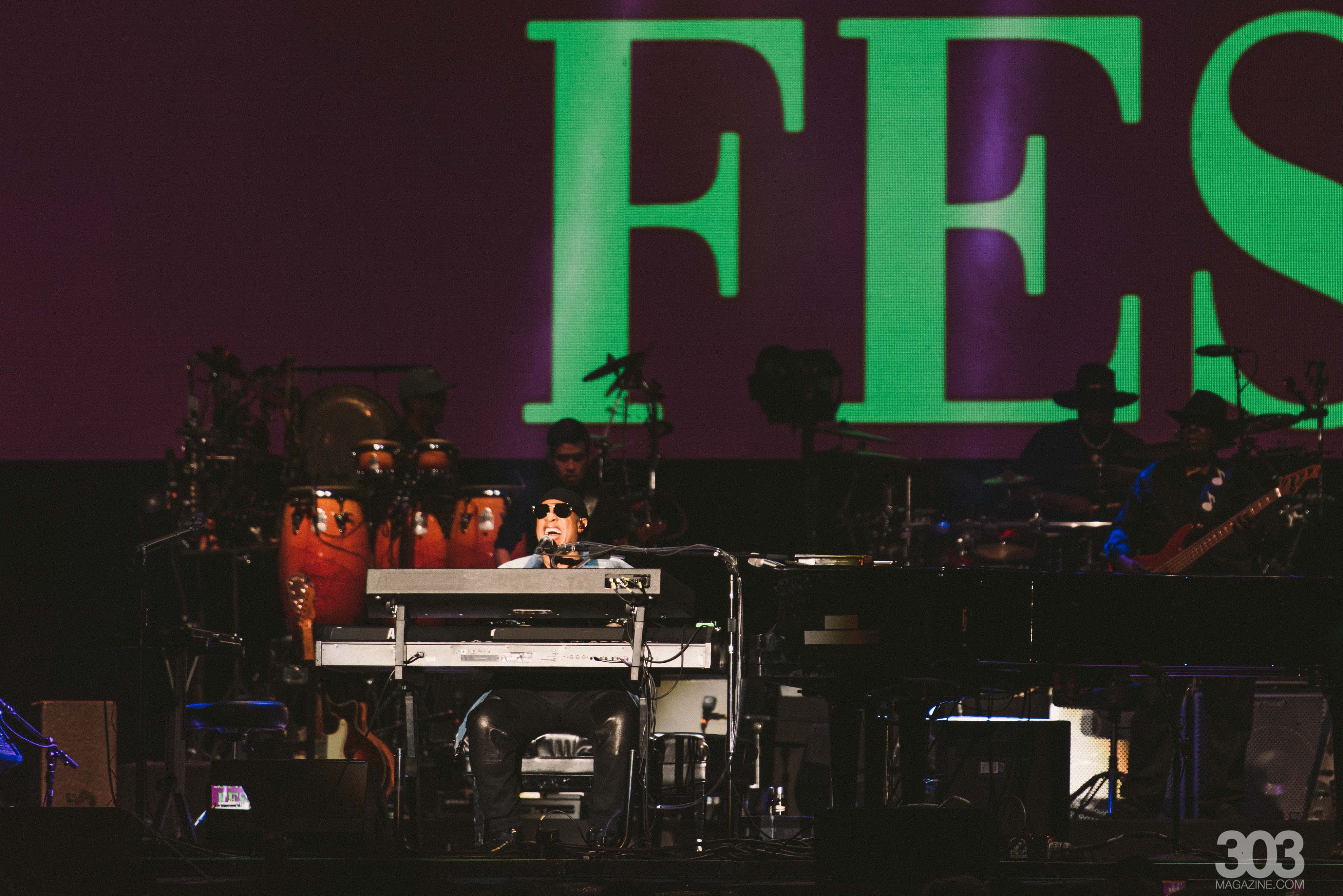 Stevie Wonder may have been the most anticipated performance of Grandoozy, and he did not disappoint. Immediately after he was escorted on stage, Wonder launched into a career spanning, hit-heavy set to close out the inaugural festival. People were dancing and singing at the top of their lungs, as the songs served as constant reminders of Wonder’s legacy. His radiant voice, refusing to be marred by age, was as clear and vibrant as on record, which made the performance feel bigger than the festival — a once in a lifetime show. Booking Stevie Wonder by and large was the grandest gesture of the festival and one that gives hope for what the next Grandoozy has up its sleeve. – Kori Hazel

Andy Frasco & The U.N. are one of the most eclectic bands out there, and they need to be playing more festivals considering their stellar performance at Grandoozy on Friday. “We’re not Kendrick, but fuck it!” Frasco said as his jam band kicked off the performance. From musicians continually running around on stage, to the continuous Bob Ross videos playing on the main screen behind the band – Frasco wasted no moment on stage. Frasco & The U.N. were one of the only jam bands on the bill at Grandoozy, and they made the best with the limited time they had. One of the highlights of the set came when Frasco stepped out into the middle of the crowd with a chair and asked the audience to lift him up in the chair while the crowd circled him, resembling a Bar Mitzvah ceremony. The set sounded tight, clean and packed a good punch. – Michael Tritsch 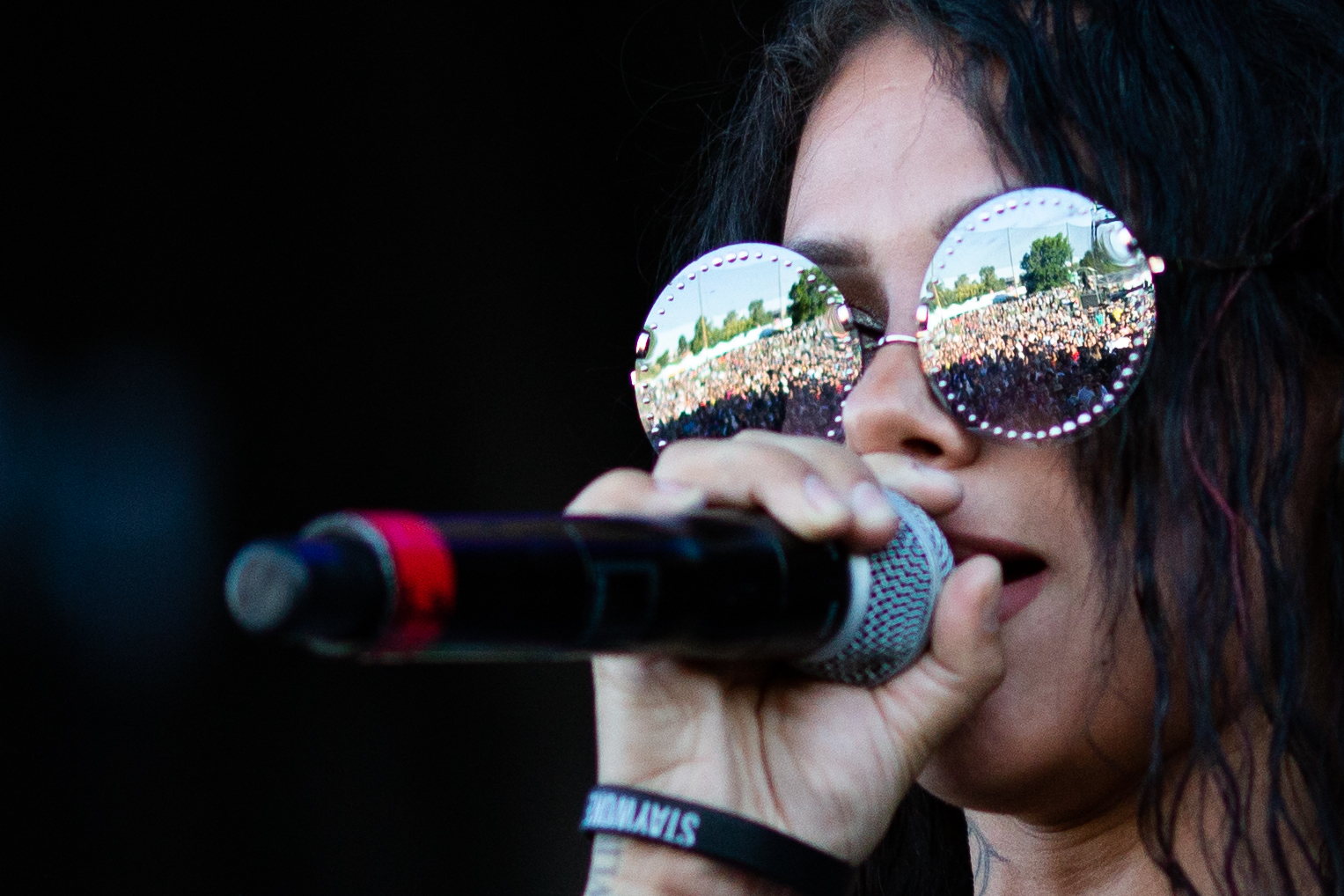 As a musician, playing in the festival circuit comes with its challenges with all the distractions going on around the music. On Saturday at the Rock Stage, Mexican-American rapper Snow Tha Product gave people a reason to party with her during her set. She walked on stage, grabbed a cup of straight vodka, toasted the crowd and proceeded to chug the whole thing in one go. The female rapper’s chopper-style flow had everyone losing their minds. It’s always the tale of a good performance when as the set progresses — people keep flowing over to the area and that’s precisely what happened during Snow’s time on stage. On top of the rapper’s blazing flow, her banter and interaction with the audience was nothing short of top-notch. She crowd surfed, invited girls on stage to dance with her and genuinely spoke to the audience. Snow gave Denver all the love she could. – Michael Tritsch 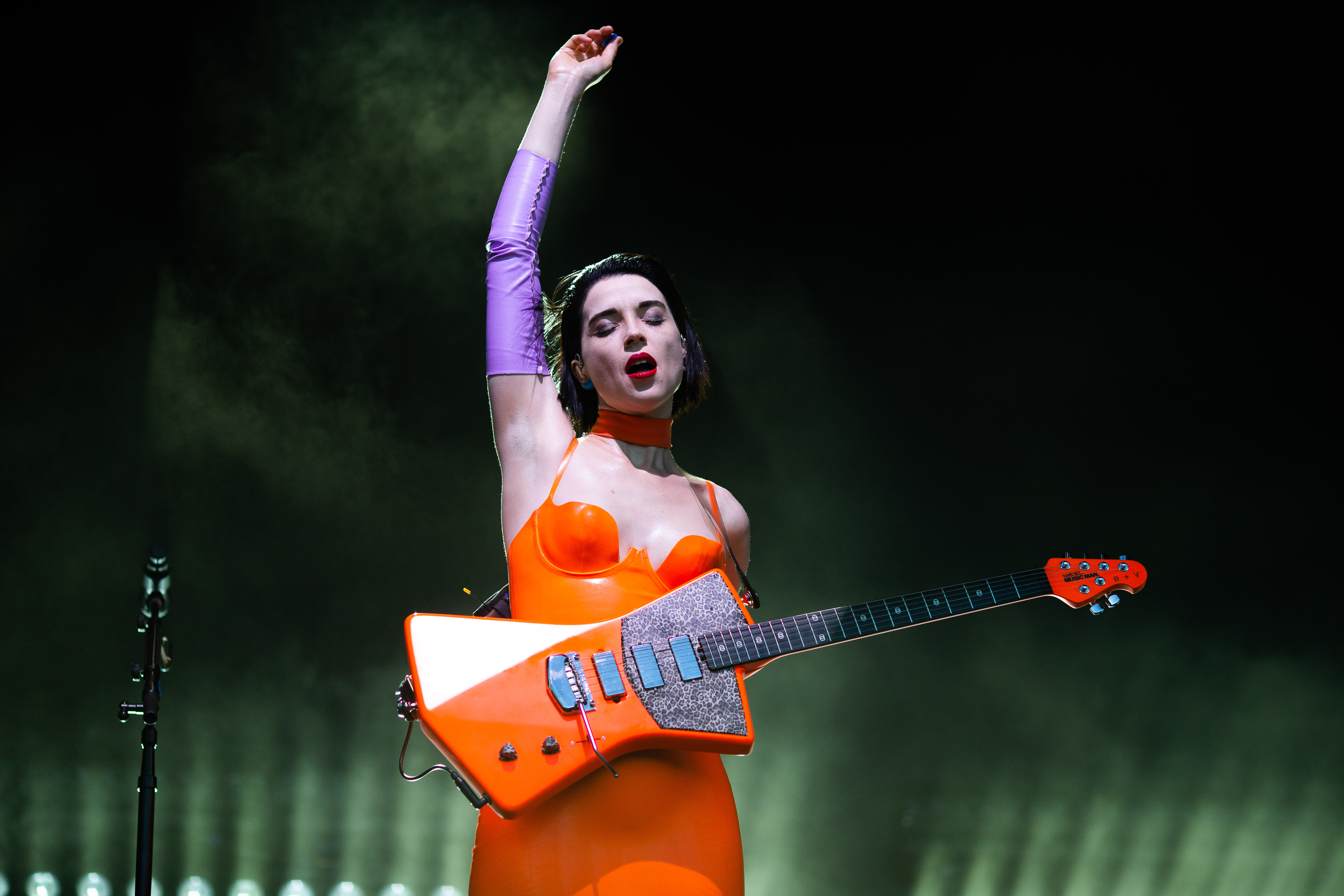 Annie Clark (aka St. Vincent) — the avant-garde rock titan — graced Grandoozy on Sunday, delivering a powerhouse performance. People were enamored in the leather laced spectacle Clark curated, which was as disturbing as it was rugged and raw. As expected, Clark had a full band in tow (the men of which wore faceless body suits), contrary to her excellently experimental Fillmore performance in February. Those looking for the rock show of the weekend, and even those who stumbled upon it by accident, were treated to a ‘doozy’ of a time. – Kori Hazel

Before attending, there was an inkling that Kim Ann Foxman was going to throw it down at the Break Room. Not only was this curiosity proven, but she also demonstrated the ability to transport past sound into a dynamic futuristic realm. Foxman’s style of deep-house was uniquely fashioned and the bass penetrated minds in mysterious ways. The experience allowed attendees to get lost for a little while — only to be found again somewhere within the surround sound bubble. – Zena Ballas 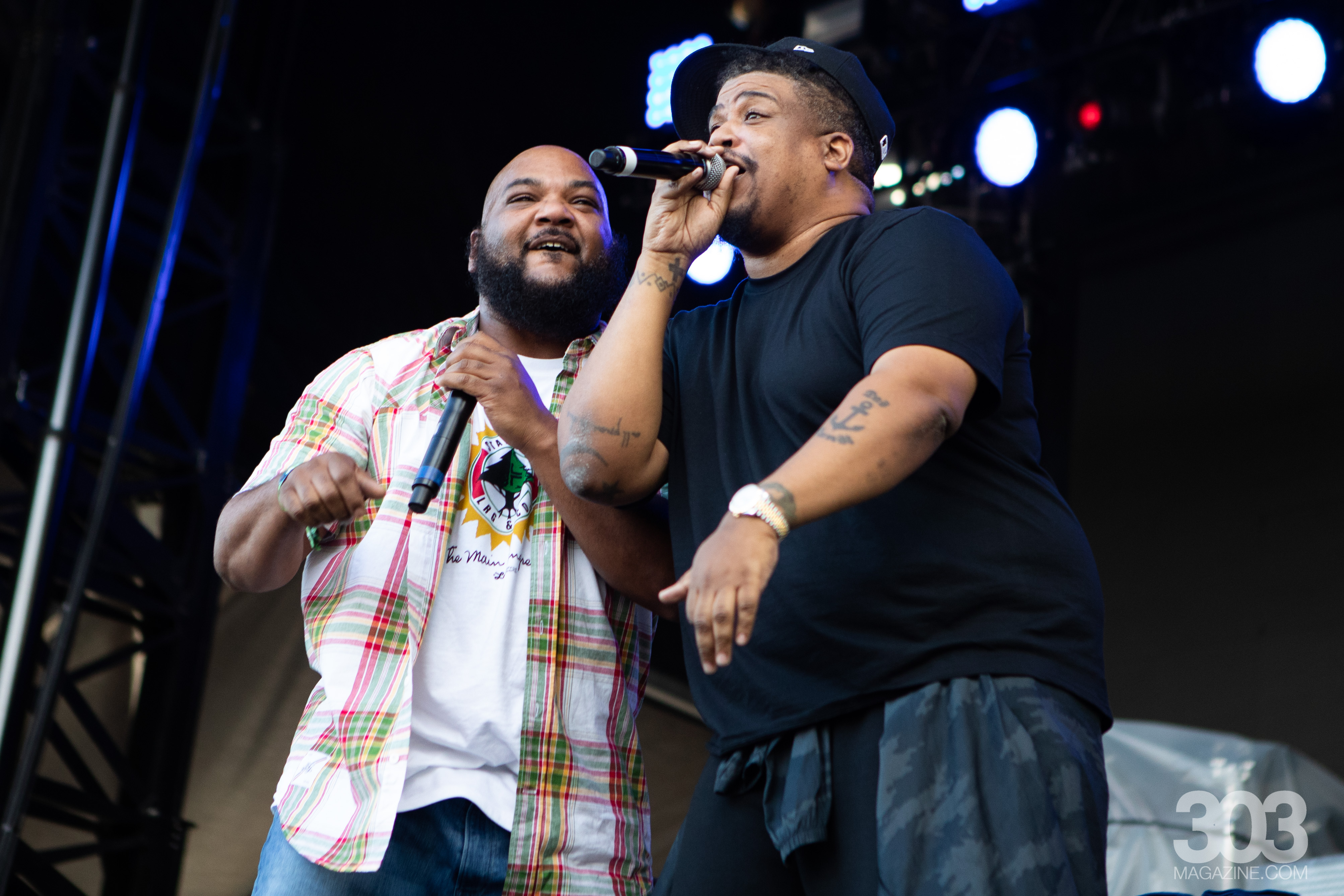 De La Soul brought an embodiment of interaction to ‘Doozy. Their rhythmic roots shined through the stage and affected every person in the crowd. Their vocal nature was clearly influential and manifested a sense of potent humanity. The entertaining performance made it apparent that everyone was there for a reason — to experience a moment of pure and prideful communication as a whole. It formed an assembly of humans who gathered together in order to contribute to the facet of representation that their music exudes. – Zena Ballas

Karl Denson’s Tiny Universe catapulted the feeling of a true musical experience. The eclectic band members, topped with their charming candor, practically spoke for itself. The audience witnessed the highest form of melodious communication — the combination of instruments emanated a sense of freedom and unity. Evidently, every listener had a hankering to hear even more jazzy wonder as the performance continued. The group started out strong to begin with and enhanced their powerful sound to an inconceivable level towards the finale. – Zena Ballas 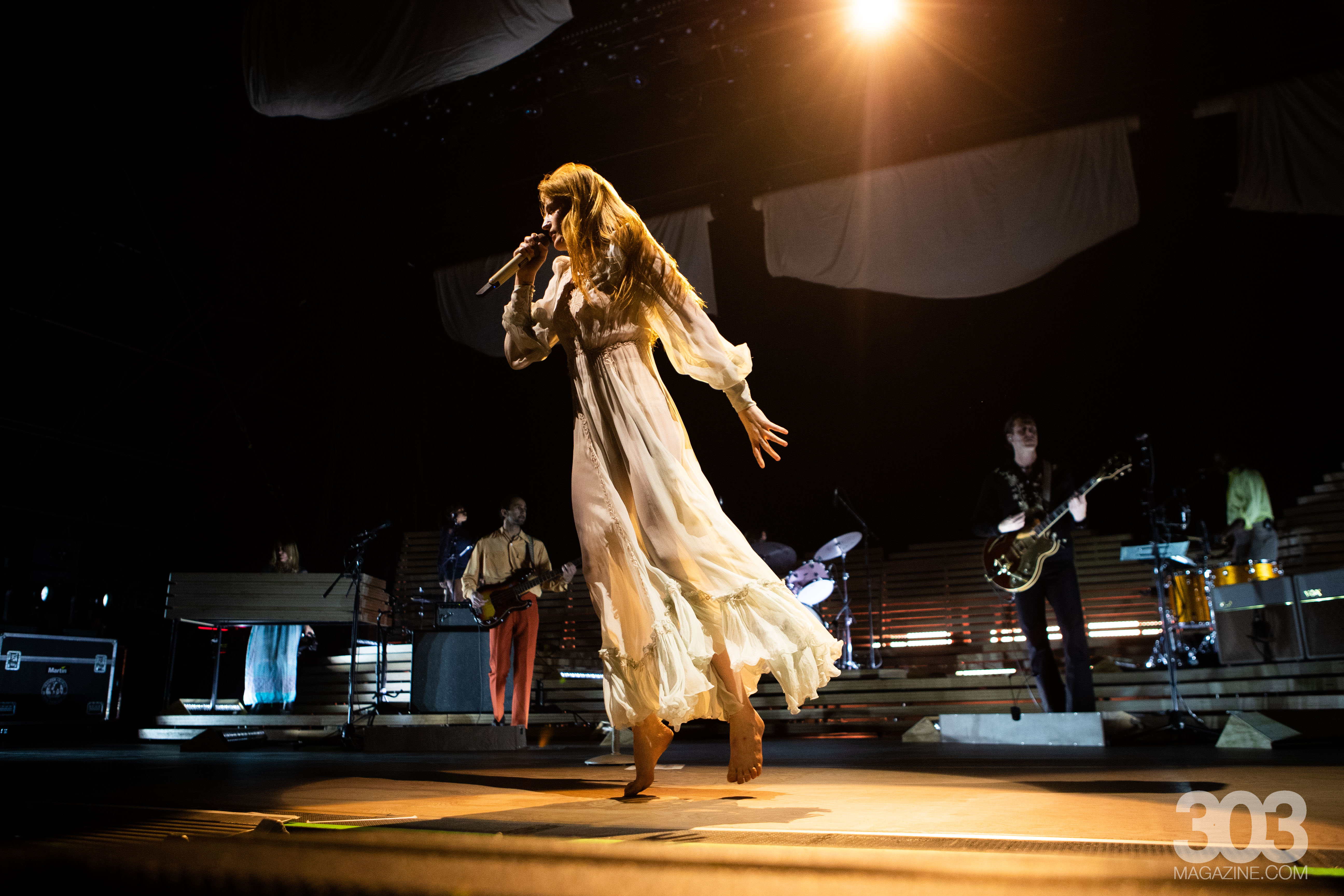 Florence + the Machine was exactly what we expected — but what we expected was exceptional. She’s one of those musicians that, walking into the show, you know is going to wear her signature long, flowing dress, is going to dance and is going to sound great. But somehow, she still manages to drop your damn jaw — with a graceful and swift pirouette to the face. Many musicians at Grandoozy fought the dreaded Mile High city altitude. Florence + the Machine conquered it, running from one end of the stage to the next, jumping, hair flipping and all-the-while managing to hold her notes. She demanded crowd involvement that left the mesmerized Grandoozy audience entranced into following her asks whether they liked it or not. Though Florence + the Machine is exactly what you would expect live, we can’t wait to see her again. – Tyler Harvey

Go here to check out more of our coverage on Grandoozy and here for more photos. 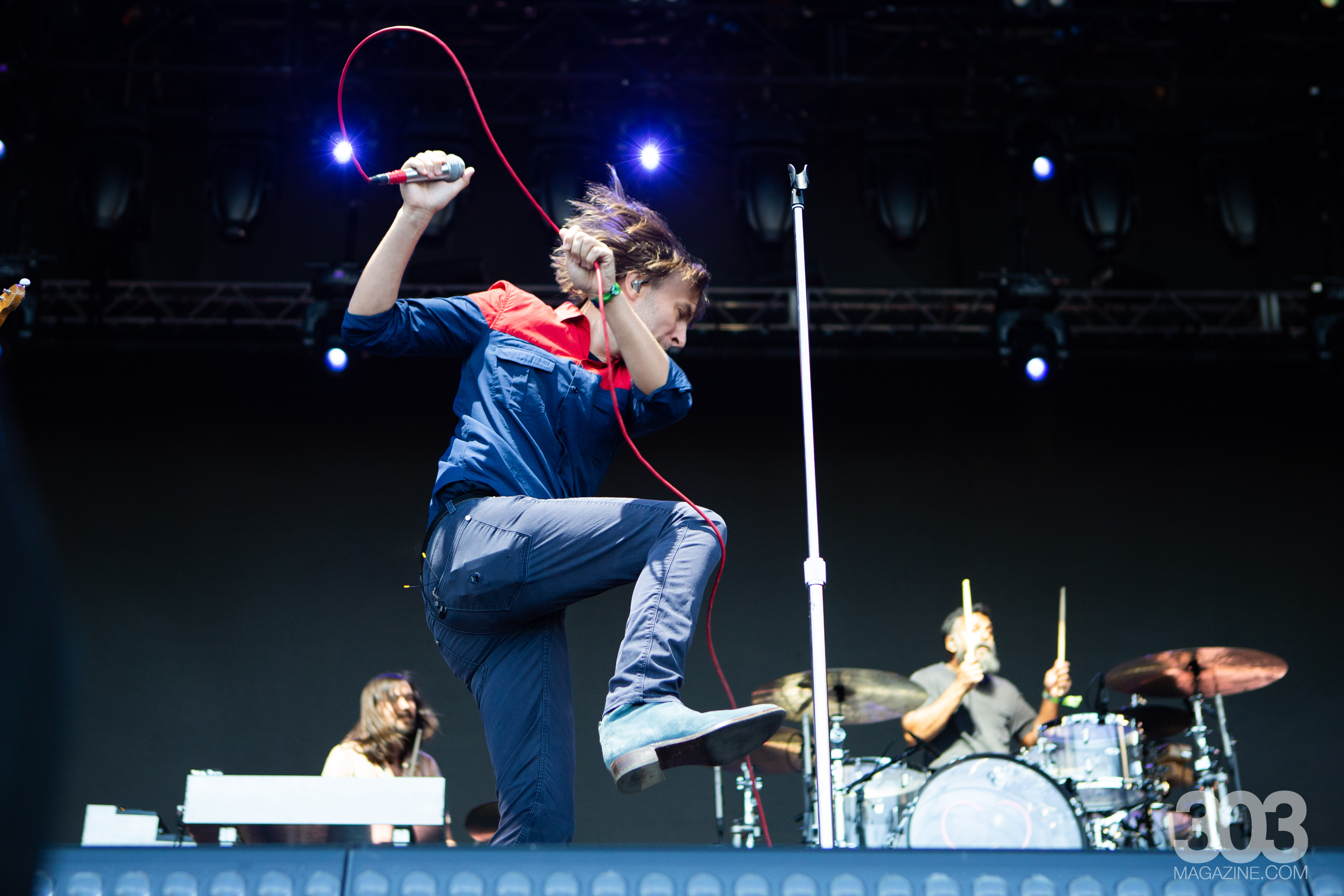