Welcome to our brand new series, Hello Denver, My Name is… where we profile people in Denver that you probably don’t know — but should. Get ready to meet painters, dancers, comedians, musicians, designers and just generally fascinating people that help make this city awesome.

Known for her whimsical murals hidden throughout Fort Collins,  Lindee Zimmer, is a prominent woman in the Fort Collins art scene. Zimmer — who is the founder & director of the Fort Collins Mural Project— is a full-time artist herself who just recently moved to Denver in June.  As someone who studied art education during her time at Colorado State University, she hopes her time in Denver will not only inspire herself but allow her to become more involved in creating communities and connections through her artwork. 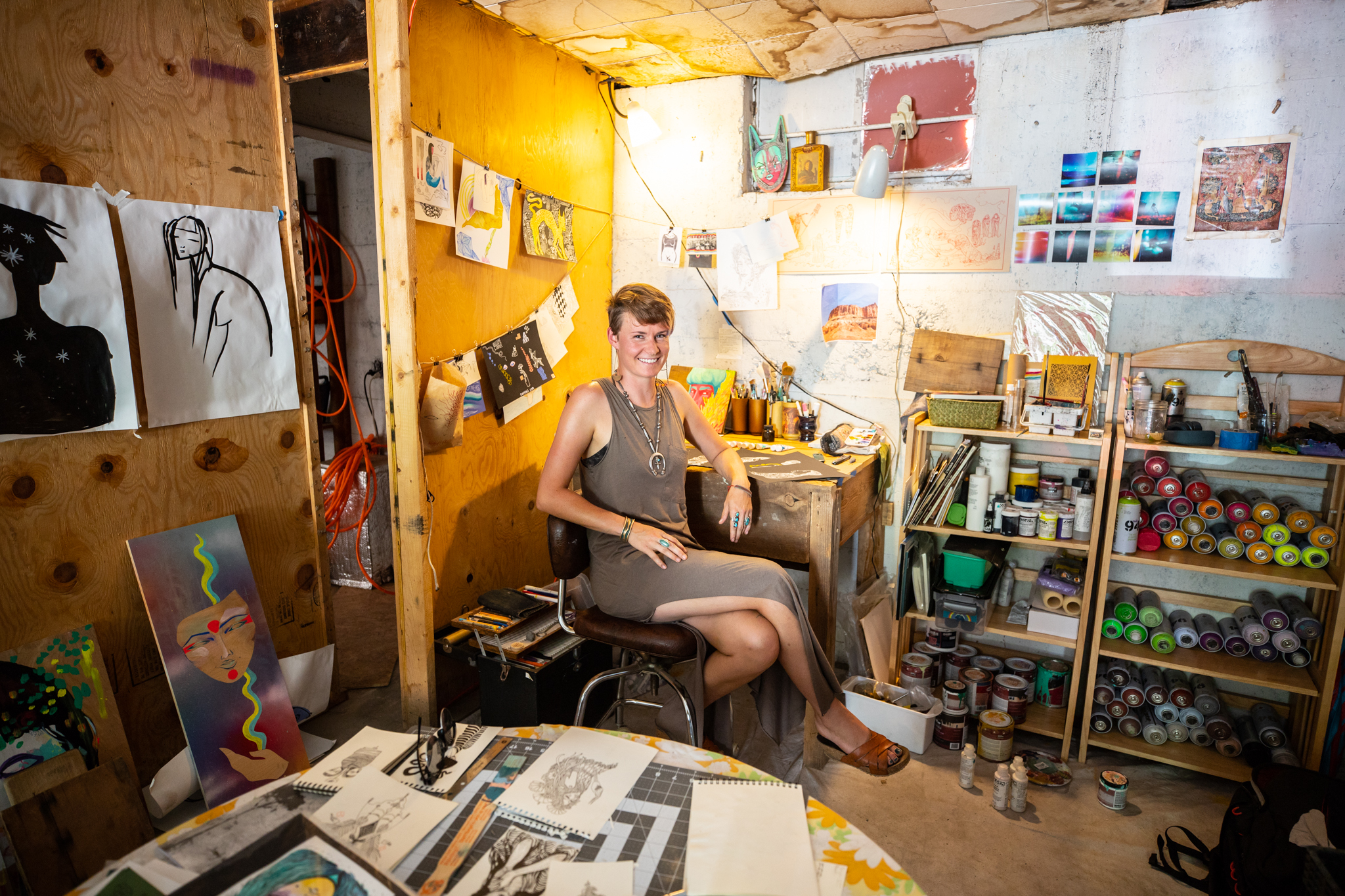 303 Magazine: Have you always been passionate about art or was there a certain age that you realized you were really drawn to it?

Lindee Zimmer: I definitely have loved art my whole life. I think that’s why it was always a kind of a little bit of a struggle as far as when it became serious for me. I didn’t ever really think that there would be this clear path to becoming an artist. But I definitely did tons of art throughout my childhood. I went to an art focus middle school in Boulder, so they had an hour and a half dedicated every day to your specific interest. It was either like music, theater or visual arts and I chose actually did theater the first year, and then I did visual arts later.

303: How would describe your style as an artist?

LZ: Honestly, most people would say that most of my work is very black and white with pops of bright rainbows. I’m definitely not a realist. I like making things that are powerful, meaningful and have a spiritual element to it, but also very mystical and magical at the same time. 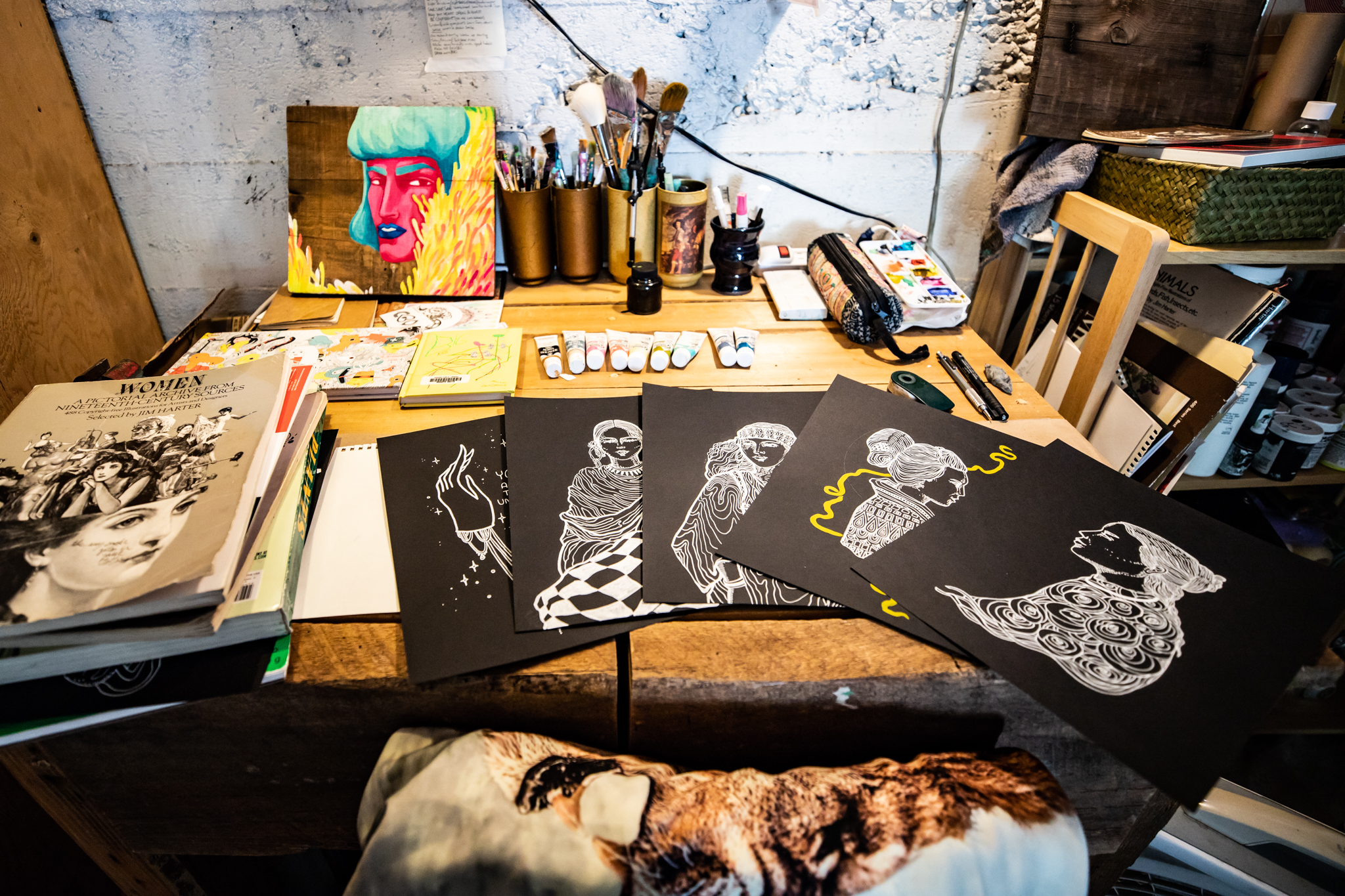 303: Is there any specific messages you promote with your art?

LZ: I’d say — now more than ever — that I really want to not only have my art inspire people but also I want to be making art which incorporates more people into the creative process and helps facilitate learning through the art that I already make, if that makes sense? I want to be working with youth and people who don’t have access to art or art supplies or have a background in art education. I want to create things that have strong powerful messages usually revolving around stewardship of our planet, and our connections with each other. We are in a really difficult time right now with how things are going in our country, and I think that art has a really great purpose and always will as far as inspiring people. But also it bringing up issues that are universal. Building community through art is my view on how we can get through this together.

303: What is your favorite medium to work with?

LZ: If we’re going to be really silly. I love gold leaf.  That’s actually my favorite thing. I mean — it’s not necessarily the actual act of using it, because that’s not fun— it’s just the effect that it has is really amazing. Something I struggled with for a long time was that I’ve always really wanted to get things as shiny as possible, and always found like gold paint to fall flat. I like creating work that’s multidimensional. So that when you look at it from another angle,  it’s a little bit different than the first time you looked at it. 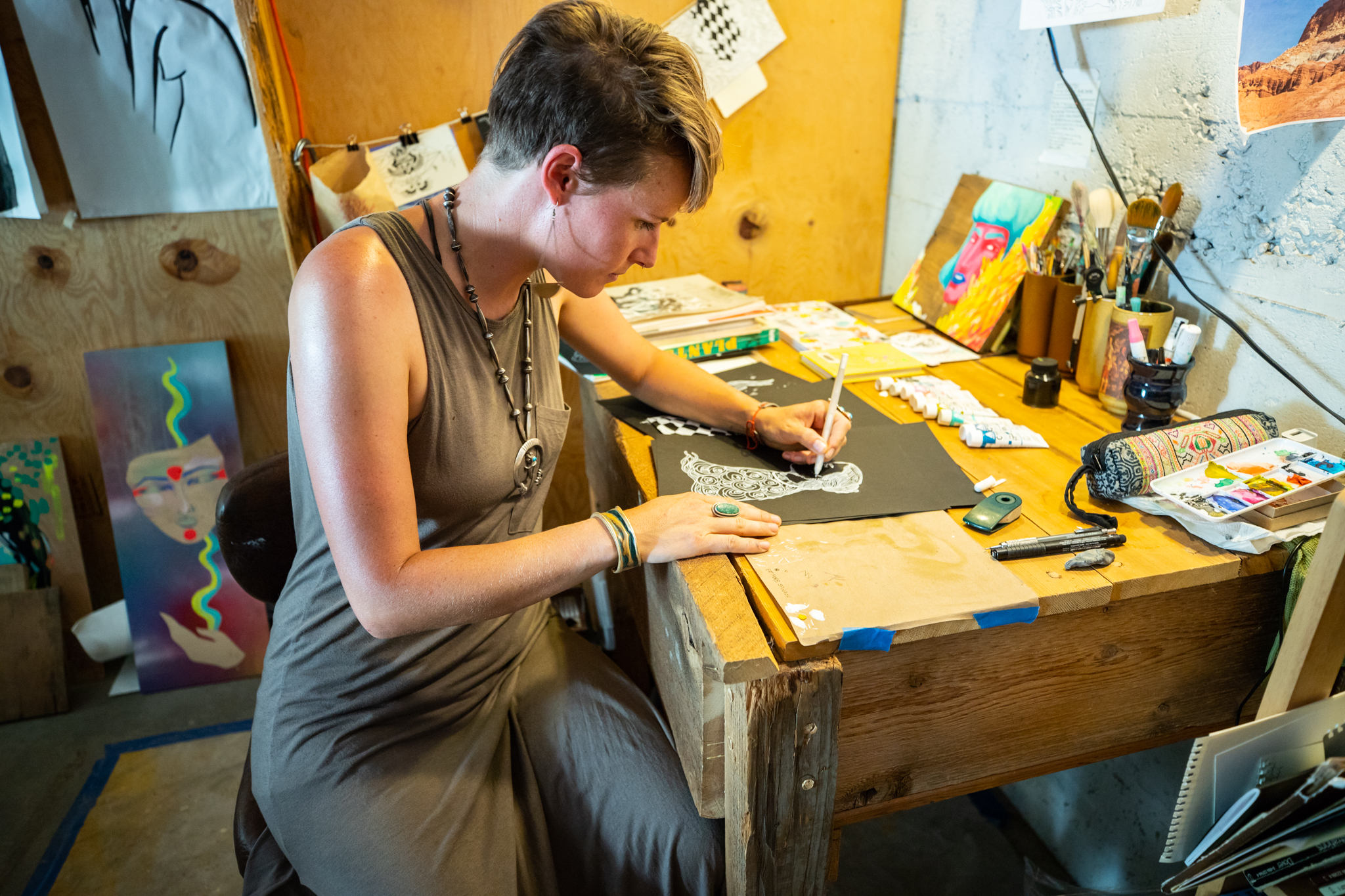 303: When did you paint your first serious mural?

LZ: It was right after I moved back to Fort Collins, and I was working a bunch of odd jobs, but my friend who works at the family center was like, “Hey, we need a big mural. It’s interactive.” So then I painted a huge mural — I think it’s like 90 feet by 11 feet, so it’s big and wraps around this whole hallway, and it incorporates all the different facets of all the programs that they offer there. It’s really sweet, very colorful, but I learned a lot on that mural. Then that kind of just got my gears going.

303: Did that mural help spark the idea of the creating the Fort Collins Mural Project?

LZ: Well,  I had been painting murals [around Fort Collins], but I also wanted there to be more contemporary large-scale murals in Fort Collins. We have already a really cool facet of that here with the pianos and the electrical boxes. But then I just wanted it to be bigger than just that.  Our motto for the mural project is every wall deserves art because the environment that we have built as humans isn’t very attractive. You know? We just made it, and we didn’t make everything that pretty and especially like alleys and forgotten spaces. But in my opinion, everything should be painted. 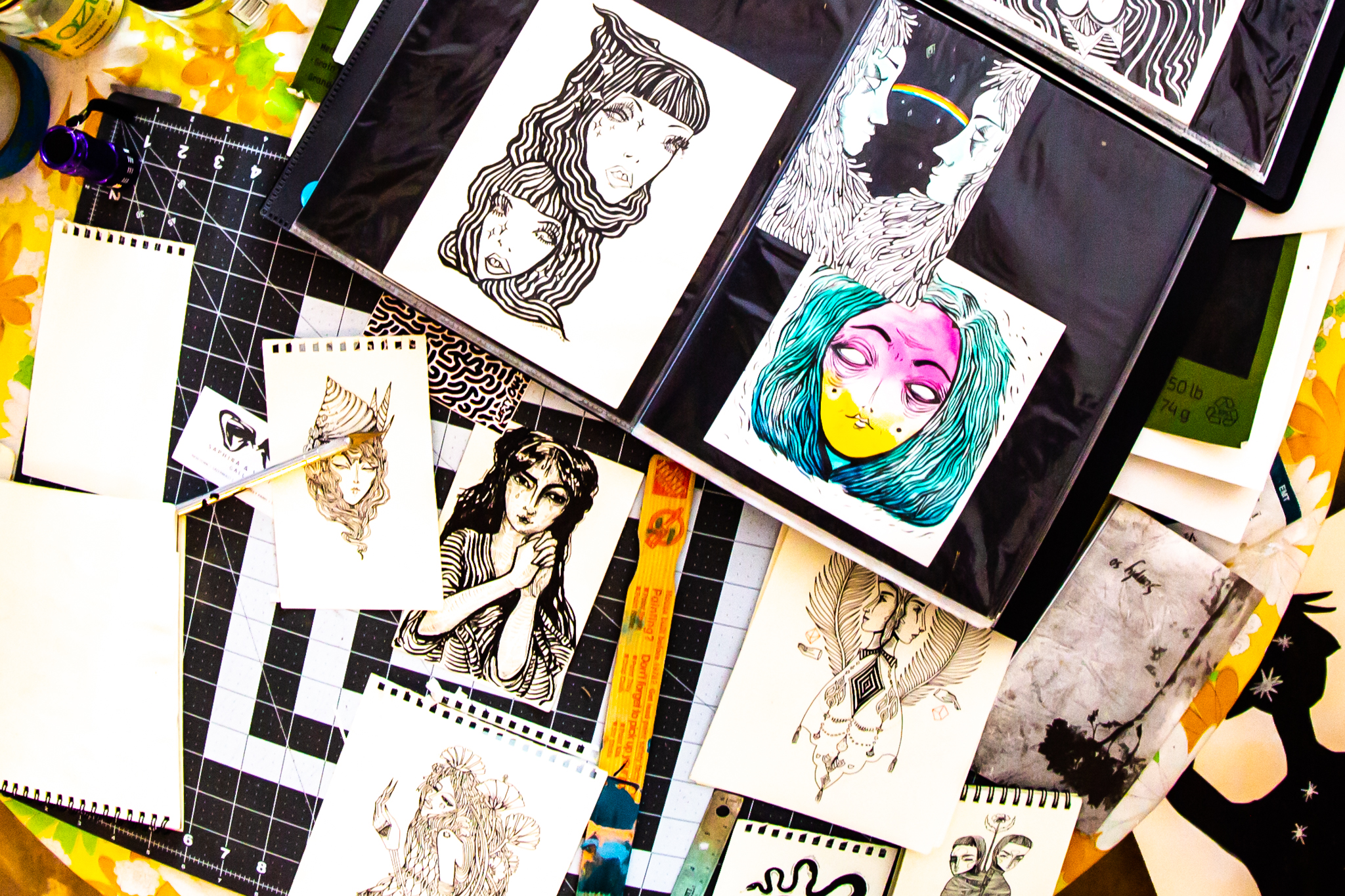 303:  You’re pretty involved in Fort Collins, so why did you move to Denver?

LZ:  Just more opportunities. I mean honestly, in the past year — and I’ve lived here on and off for 10 years — I felt like I reached a point in my career and life where I needed to be in a new space to grow as a person, but also as an artist. I’ve been here. I know everybody. I’m very connected, but also I can’t paint any more walls, because I already have done so many.  That is why I’m really looking forward to being in Denver. It’s a larger demographic. There are more walls. And while I’m not necessarily going to start another nonprofit, because there’s a lot of things going on already, but just plugging into the existing things that kind of match with my ethos. I really want to bridge the gap between art and education by involving more high school age students and even middle school or elementary to help create and plan murals.

LZ: Yes!  I’m really, really, really excited for that. I feel so fortunate for the opportunity. because I was about to fill up the form [for CRUSH] when the owner of the Ramble Hotel reached out to me. He wants it to be an interactive thing. So 25 of the hotel guests are going to come to a presentation/workshop during the week of CRUSH.  I’ll do a little brief history on street art and murals and then talk about myself and my experiences. Then we’ll go outside and I’ll teach them some basic tips for spray painting, and then I’ll have them help fill some larger mapped out parts of the mural. It’s a massive wall, — I think it three-stories tall — so it’s going to be an interesting project! 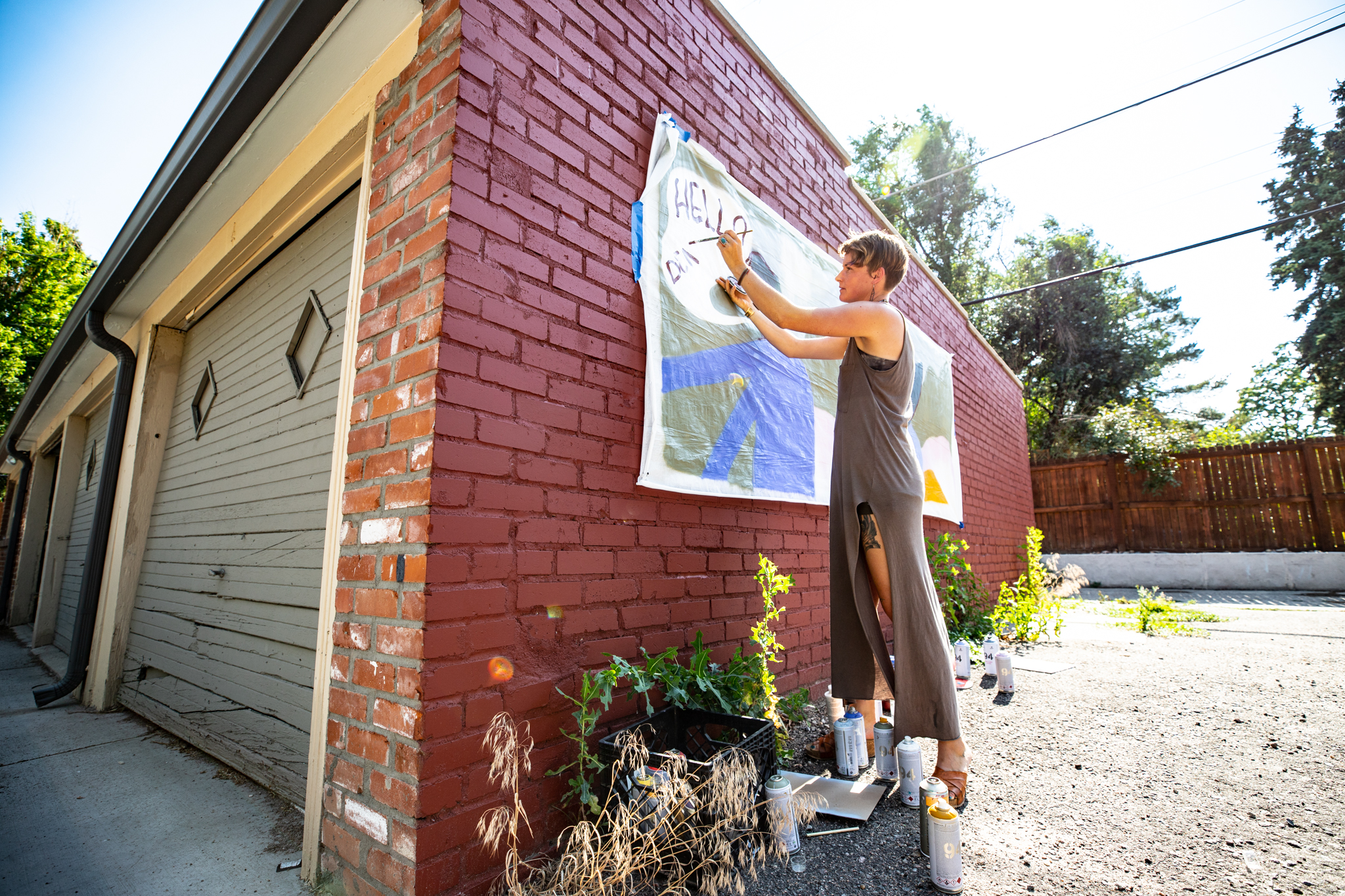 303: Last question. This one is coming from our last interviewee, Latasha Dunston: What decade would you want to live in other than this one, and why?

LZ: I would want to live in  America during the 1300s before it was colonized. I would love to see this land before we forced people off and paved everything. I would also warn people what was coming. Maybe the world would look a lot different.

Catch  Zimmer’s first show in Denver this weekend on July 14 at Dateline at 7 p.m. She will have multiple pieces from her new series All Women to the Front on display. All pieces will be available for purchase for just $20. 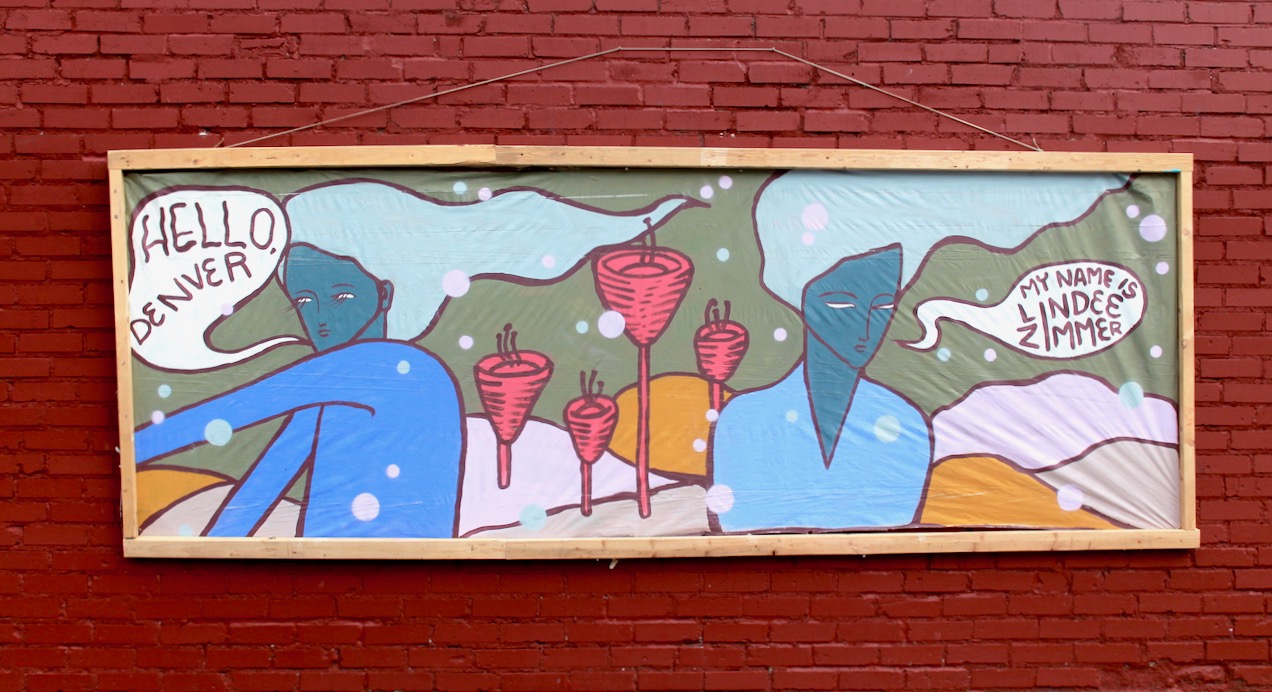 All photography by Heather Fairchild unless otherwise stated.