At the beginning of this year, local art fabrication team Yetiweurks installed a massive public art sculpture in Civic Center Park and unfortunately, this morning that sculpture was found vandalized. The sculpture, called Tree of Transformation, is made with an old piano, steel tubes as grounding “roots” and steelpans from Trinidad and Tobago (as the branches). At some point last night the piano was set on fire and bags of trash from receptacles around the park were thrown around it. 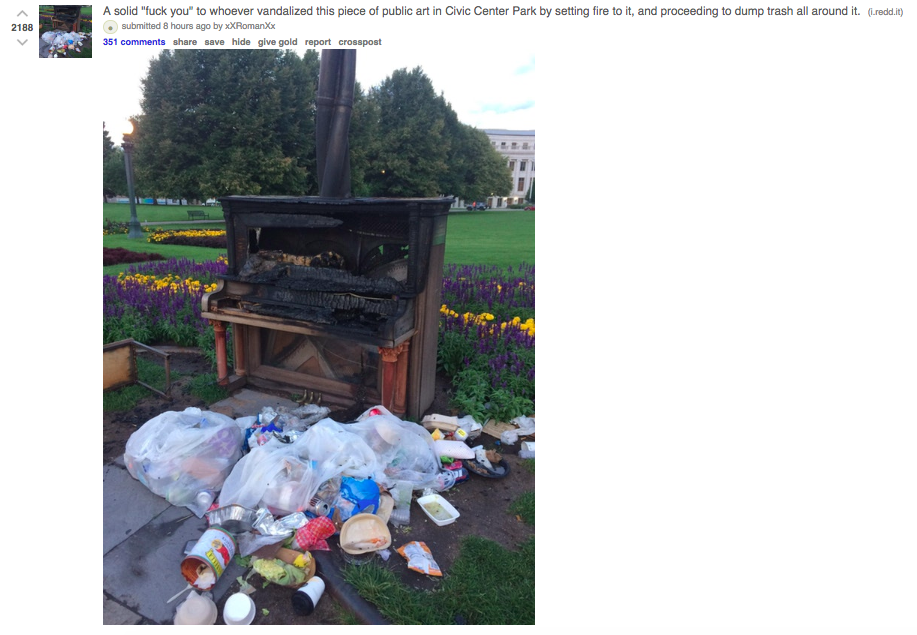 Tree of Transformation was a project coordinated by the Civic Center Conservancy, a group with the hopes of revamping Civic Center Park through interactive and fun art pieces. It was the first project they managed to put together, with the help of a P.S You Are Here Grant, Xcel Energy and a private donation. On the Reddit post this morning, some commenters expressed doubt about the source of the fire, wondering if the flames could have sparked from within the piano since the installation required gutting the piano and replacing some parts with electric wires in order to make the steelpan heads light up when piano keys were played. But, according to Denver Arts and Venues, the fire was part of the vandalization, along with the trash.

On the day the “tree” was unveiled to the public in January, the director of events for Civic Center Conservancy, Eric Lazzari stated, “we wanted something that was whimsical and fun, something that people of all ages could play with. Through the investment in local, interactive art, we hope to attract people to the park and get park visitors to stop and stick around a little bit… It’s about bringing people together in this space. We also hope the creative community of Denver is going to look at Civic Center Park in a different way.”

Some of those words sting now, knowing the intention of this piece — and any public art piece — is to benefit the community who walks by it every day. When Lazzari wished for more people to stop by the park and stay a little longer because of the “tree” he definitely wasn’t hoping for vandalism. And although public art is unprotected, it always hurts when a piece is defaced for two reasons — an artist or group of artists put time, money and effort into creating the piece and public art in all its forms is a gift to the community.

Though we contacted the artists, Civic Center Conservancy and Denver Arts and Venues this morning, the only thing they could say is that the tree was in fact vandalized in the middle of the night and that there was no other information available at this time.

If there is any silver lining in this situation, it is a lesson these specific artists have learned more than once at their attendance and involvement in Burning Man. The Tree of Transformation installation was, after all, first made for Burning Man and displayed there a few years ago. So even though the artists did not choose or accept the sacrifice of their artwork by fire, it may be a more fitting death than anything else.

At this time there are no funding campaigns or plans to repair the installation.