Go Play the “Tree of Transformation” in Civic Center Park

The newest sculpture in Civic Center Park first found its temporary home at Burning Man. It’s called the Tree of Transformation and it’s designed by YetiWeurks—a Denver-based engineering and art team of Ryan Elmendorf and Nick Geurts. The project is a part of the Civic Center Conservancy‘s effort to revamp the park and bring creative experiences to those who use it. Funded by one of the P.S. You are Here Grants, a grant from Xcel Energy and a generous donation from Slifer Smith & Frampton, Tree of Transformation is the second in a series of giant audio-visual sculptures that Yetiweurks has made in order to encourage interaction and recall the wonder of childhood. It was no surprise then, that the first eager hands to touch the piano were kids at last night’s unveiling.

The “tree” is a 20-foot tall apparatus built with an antique piano and steel branches that are capped by steelpans that light up when sound is played through them. In order to keep the weight of the steelpans balanced, steel roots had to be implanted beneath the piano, in the same manner as a tree’s roots spread beneath its branches. The steelpans were crafted in Trinidad and Tobago, where they are considered the national instrument, and the keys of the piano correlate to mallets that hit the steelpans and activate lights. It’s the perfect oddity to stare at for a while when someone else is playing or to play and feel bigger than yourself. Situated in the middle of the park, Tree of Transformation sends out sound like a siren call, enticing pedestrians toward it with curiosity and intrigue. And everyone is invited to play it.

“We like having [our project] in a very visible place, which it is here, and having as many people as possible come experience it,” Guerts explained. “We’ve done four or five other big scale public art projects. We fuse engineering with art and we make very functional things that are different and unexpected.” 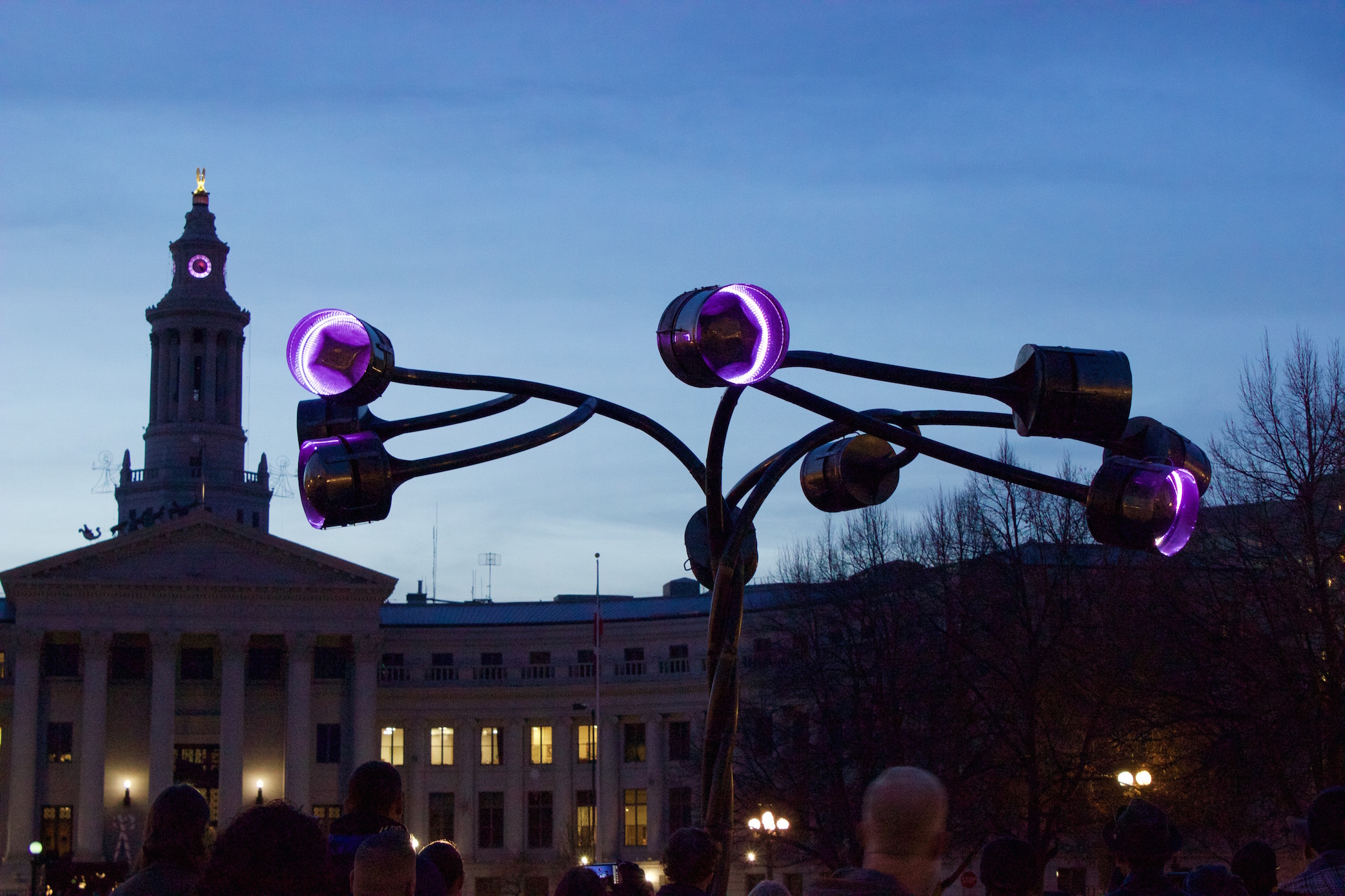 Eric Lazzari, director of programming and events for Civic Center Conservancy, explained before the official opening of Tree of Transformation the goals of installing a piece of its nature. “We wanted something that was whimsical and fun, something that people of all ages could play with. Through the investment in local, interactive art, we hope to attract people to the park and get park visitors to stop and stick around a little bit. When the piece had been turned on for only about 20 minutes today, very quickly a large crowd gathered spontaneously and started playing it. We realized just then that we had made the right decision. It’s about bringing people together in this space. We also hope the creative community of Denver is going to look at Civic Center Park in a different way. We want to let the creative community know that we are in business — we want to partner with you.”

As part of the P.S. You are Here grant system, the sculpture will only remain in Civic Center Park temporarily. See it, play it and listen to it before April 15, 2018. 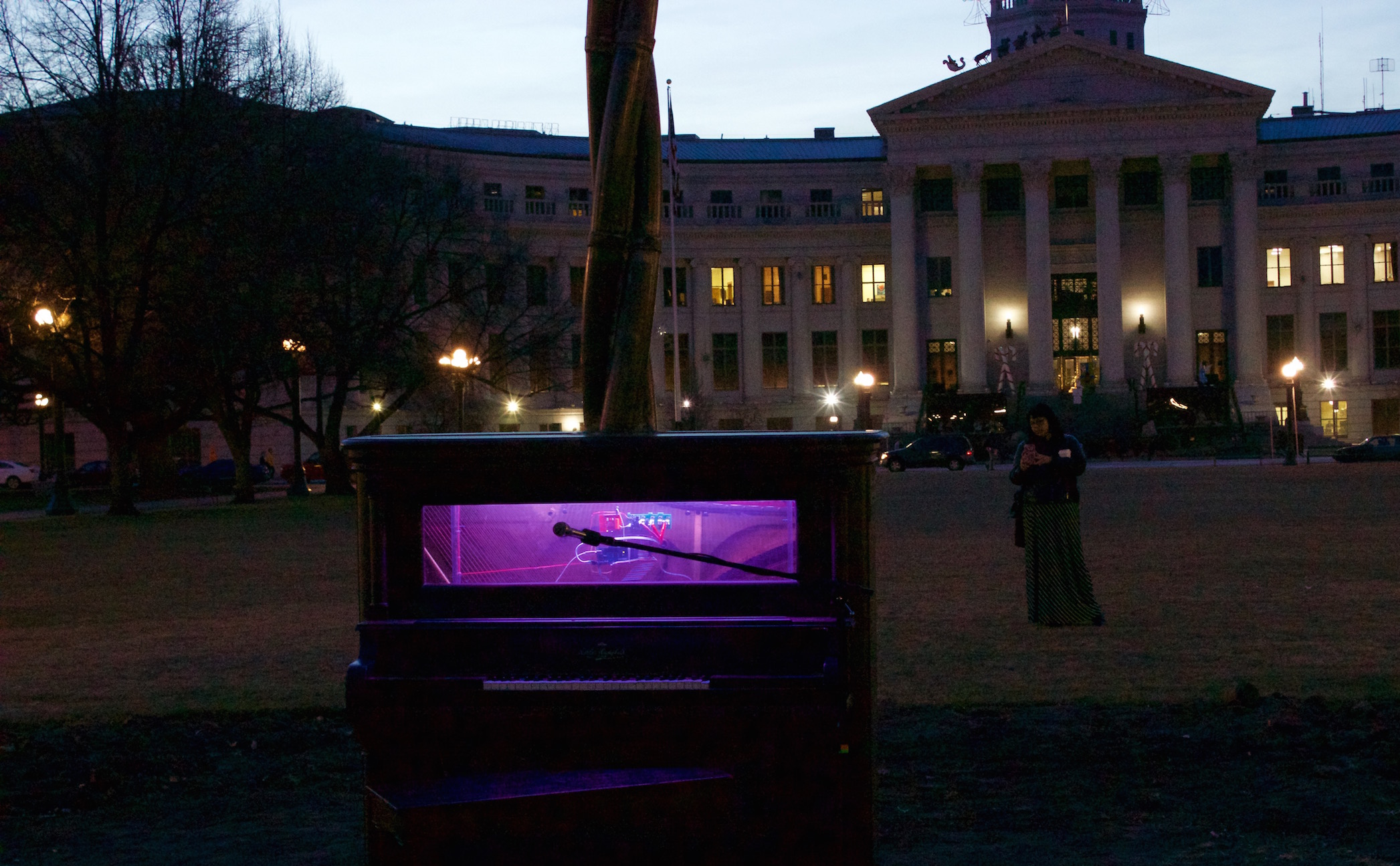 The inner workings of “Tree of Transformation.” Photo by Cori Anderson

For information on other P.S. You Are Here grantees, read this article.