The Counting Crows came to the Pepsi Center on July 18 with openers Boom Forest and Live for their “25 Years and Counting 2018 Tour.” At the show, The Crows upheld the fact that the best part of going to any concert is the live experience you get that can’t be replicated by just listening to your SoundCloud or Spotify. Getting to see what makes each musician unique, their improvisation, the mistakes that could happen and your favorite artist talking to the crowd — these are all a part of that experience. The Crows put on a live performance that sets them apart from even listening to one of their live albums. Lead singer, Adam Duritz, smoothly transitioned to each song by speaking about relatable situations in his life, in a slam poetry style. It was like a Broadway show, telling a story about life’s paths, overuse of technology, struggles, love and spirituality.

Boom Forest was a breath of fresh air, with soothing, folk-influenced music. The foreman of the group, John Paul Roney has made it clear that he believes social media and technology are consuming our society. Roney gave segway for the upcoming emotional experience by relaxing the crowd with his smooth voice, chill beats and kept it simple with his two-man band. However, he wasn’t timid at all in discussing society’s obsession with technology. Roney went on to declare his disdain for social media during his set. “I hate it [social media] so much, and I always have, that I wrote a song about it, it’s called “Crying Eyes” for all you out there who hate it too.” At the end of his set, he asked the crowd to follow their Instagram account, admitting that it was quite hypocritical of him to do so. 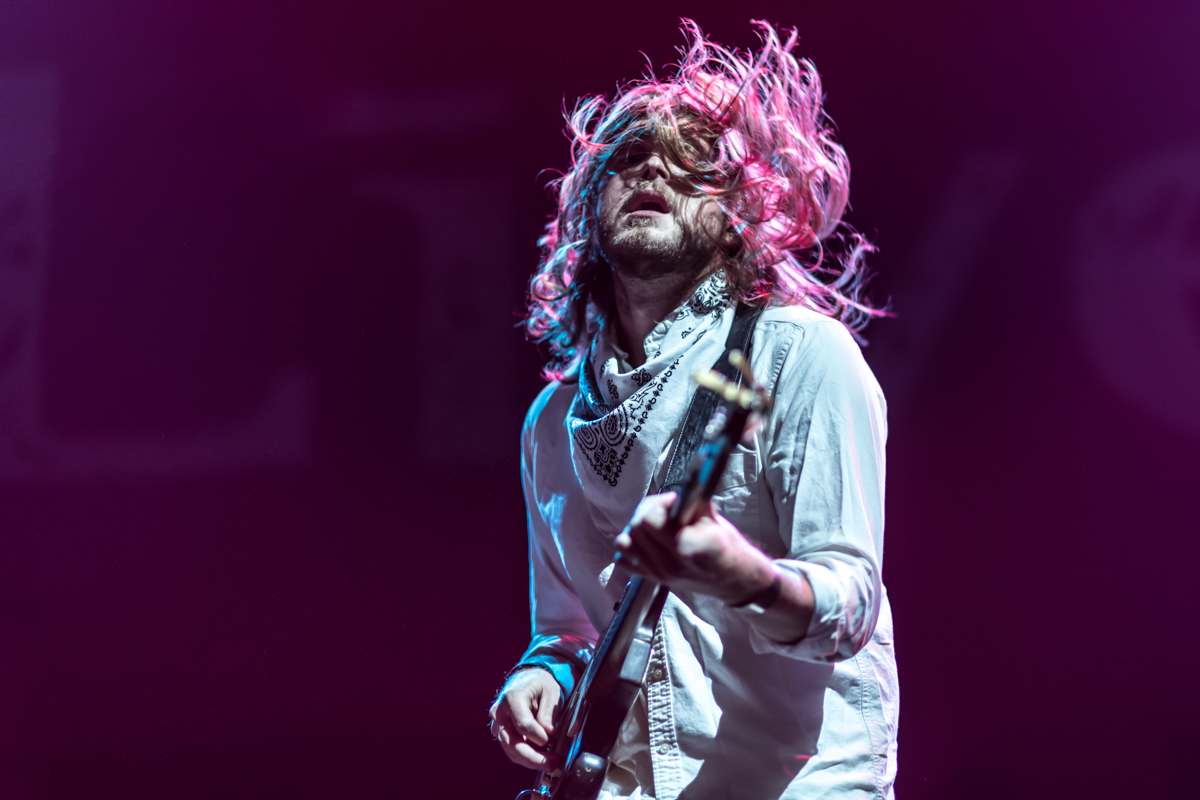 After a 30-minute set break, Live hit the stage. It was a reunion of the popular ’90s alternative and classic-rock band with The Crows, who had toured in the mid-’90s together during the height of their success. The lead singer of the multiplatinum band from Pennsylvania, Ed Kowalczyk said, “I just want to turn off all the news and go to rock ‘n’ roll concerts for the rest of my life.” Clearly, the agreed common theme was to let go of your tech for a while and simply enjoy the performance and live music. It looked like the crowd thoroughly agreed with him, enjoying themselves, providing roars of laughter, clapping and showing extreme delight. The band moved into, what is now considered a rock classic, “I Alone” — a song that has that perfect combination of hard and soft. It was the kind of music that gives the audience an emotional reaction.

Kowalczyk forgot the lyrics to an entire song and joked about how he drank too much Jack Daniels. One might give him a free pass for such a mistake, after such a long absence from the scene (the band just recently rejoined for this tour). They continued to play and the crowd paid little attention to this mistake, just another part of a real live performance, pun intended. Although Kowalczyk did forget his own song lyrics, he was quickly able to redeem himself after the audience requested an encore. Live came back onstage to perform one of their biggest hits, “Lightning Crashes,” a song that beautifully represents the cycle of birth, life and death. Emotion resonated throughout the entire venue and the performance was nothing less than captivating, to say the least. 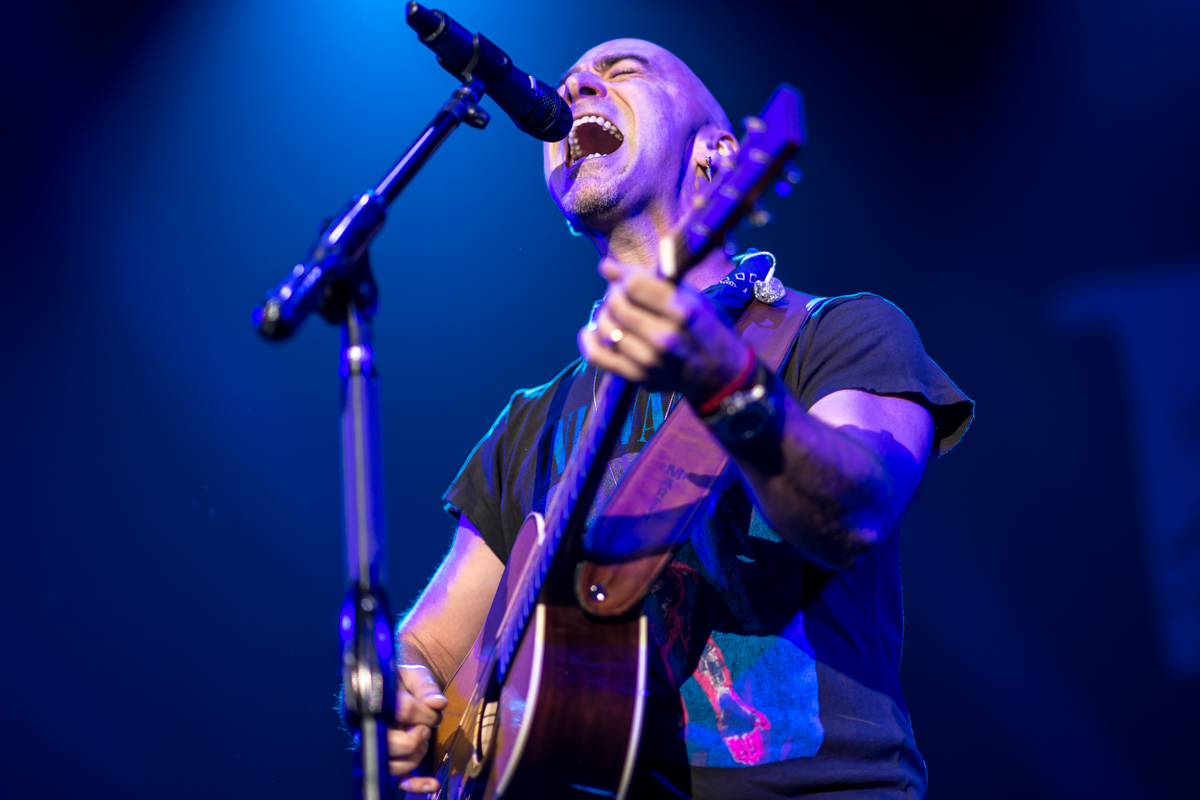 The Crows started their reign of success in 1994 and, unlike Live, have continued making music throughout the years. While some would consider The Crows an overnight success, Duritz made it clear that they constantly immerse themselves in music. “Every night we wanted to play music, to rehearse music, to listen to music. We were just hoping someone notice us, then you did and you still do,” Duritz said with appreciation before singing “Round Here.” They were more than just noticed by spectators — diehard fans sang out every lyric to their favorite songs, word for word. Their continued success and absolute love for performing shows allowed the band to come off as more than just well seasoned.

“All of a sudden I had this horrible feeling, like this whole thing was gonna be over [his relationship] and I mean, that’s all we want in life is just to find anything, something, permanent because everything is so temporary and you just wanna find some person, something, that isn’t.” – Adam Duritz.

The Crows, particularly Duritz, added another dimension to their music and truly brought the performance to life. It wasn’t just about stringing together all their hit songs and making a few shout-outs to the crowd. Duritz talked to the crowd as if he was telling us a story in between songs. It seemed like everything he said had meaning as he spoke while flawlessly transitioning songs. This time, he talked about something everyone can relate to, feeling like you’re at a stalemate in life — going nowhere.  “All the poignant writing in the world doesn’t make a difference,” Duritz said. “In a band, all you do is go places, but you’re not going anywhere at all.” This was the prelude to the song, “God of Ocean Tides,” the first song Duritz wrote for Somewhere Under Wonderland, which was the bands first original release since their 2008 album Saturday Nights & Sunday Mornings.

The Crows performed with intensity and passion during this show, that superseded just listening to their albums. Never did the meaning of the word “depth” make more sense than at this concert. Unless you’ve seen The Crows perform live, you haven’t seen all they have to offer. However, the crowd did seem confounded when they did not perform, possibly their most popular song, “Mr. Jones.” Although there was some surprise about that, and a little discontent, the group did put out a set list prior to the show, already confirming the song wouldn’t be played. Hits such as, “Omaha” with its distinct accordion sound and “Colorblind” — one of their most romantic and mellow songs — really exhibited the wide scope of their capability, driving home the expressive and powerful experience of this concert. With or without “Mr. Jones,” the show was still a unique performance and an overall spiritual and sensational experience in itself.

All Photography by Mark Tepsic. Check out our full gallery here.