New Zealand born, Australian-based electro-funk DJ Opiuo (Oscar Davey-Wraight) is coming to Colorado for a headlining show at Red Rocks next month. After last year’s Red Rocks performance before Emancipator, where it was hard to find a person not grooving to The Opiuo Band’s glitch hop tunes, it’s no wonder the amphitheater wanted to see what Davey-Wraight could do with a night dedicated to his innovative beats. Long-time fans and newcomers to the syrupy-bass of Opiuo can rejoice doubly with this headlining show, as the announcement of an exclusive live performance with a 20-piece orchestral set, the Syzygy Orchestra, comes to light. This orchestra is a collaborative effort of Davey-Wraight and Devotchka member Tom Hagerman and will only perform the one night at Red Rocks, with no other dates or venues scheduled so far.

When Davey-Wraight was given the opportunity to headline at Red Rocks, he took no time deciding that it would be a momentous occasion. Roughly six months later, after following something of a pipe dream, he’s more than excited to bring his symphonic love-child to the famous venue. Using the instrumental expertise of Hagerman to reimagine and reinvent old Opiuo songs, Syzygy Orchestra isn’t just about putting string instruments under the characteristically swampy bass beats. These compositions will be a whole new beast and Denver will be the first in the world to experience them.

“It might sound cliché but I honestly feel blessed and fortunate to be able to even do something like this and to do it somewhere like Red Rocks. It’ll be the highlight of everything I’ve ever done,” Davey-Wraight remarked.

So far, there are a few teasers for fans to sink their teeth into when it comes to the Red Rocks exclusive — from a cryptic video with scenic shots of the DJ at the amphitheater during the day with crescendoing background music, to the recent release of the Syzygy 01 with five new songs (but not recorded with the orchestra). But as far as what to expect from the orchestra itself? Davey-Wraight reports, “I’m going to keep that a secret, for the show. It’s a great variation and there are instruments I never even dreamed of working with. But I want to show it off and have people see it for themselves.” 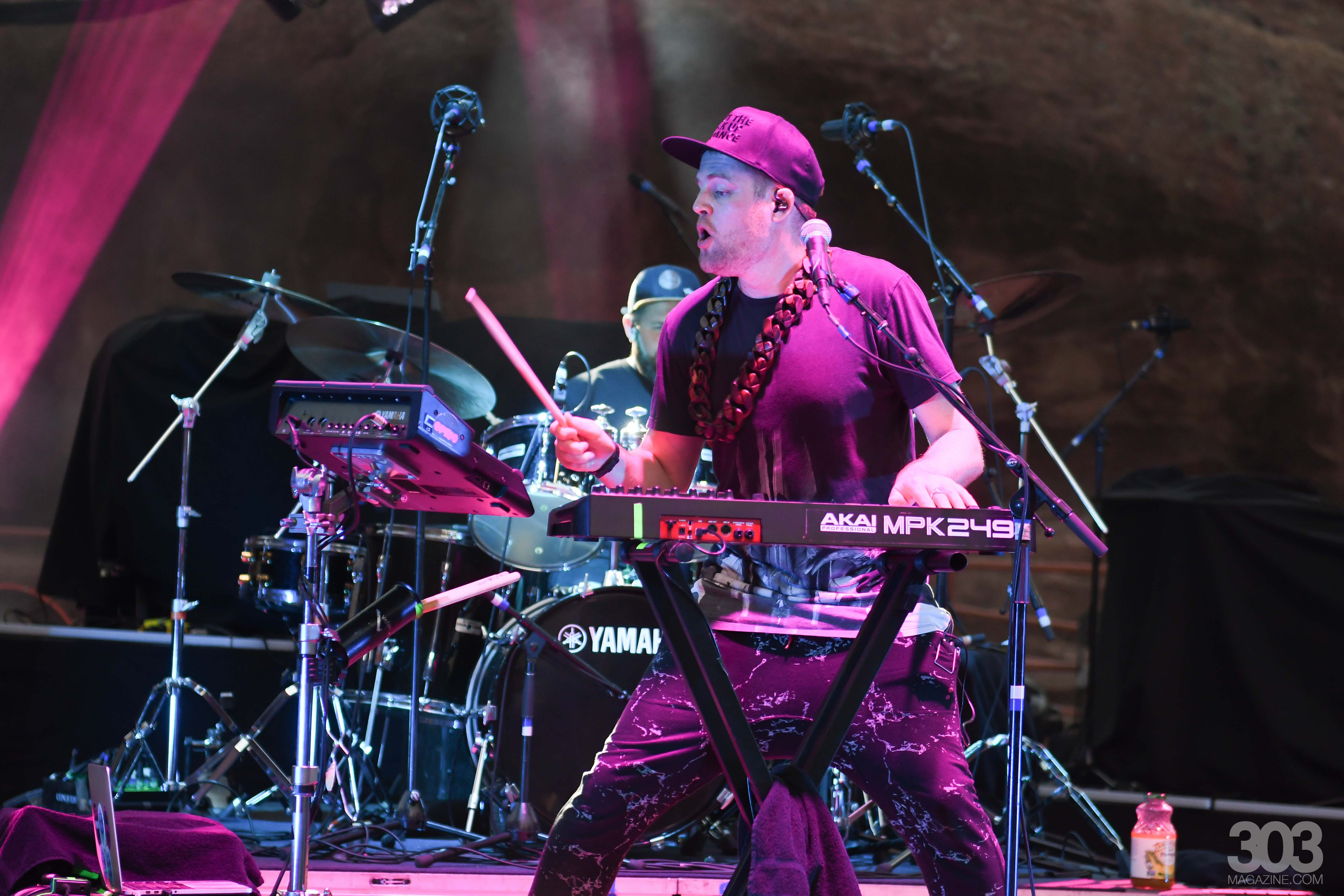 Opiuo at Red Rocks in 2017. Photo by Miles Chrisinger

Staying true to Opiuo style, Syzygy Orchestra is another step in the musical evolution that Davey-Wraight has succeeded with up to this point. He is no typical techno-electro-dance DJ. “I have no 100 percent set goal in what I’m doing. I started out DJing and then putting live music into my sets,” said Davey-Wraight. “At the time I didn’t know anyone else that was doing something like me. As I started getting more popular I needed new ways to perform — I just couldn’t play the same thing night after night.” Starting as a one-man-show, Opiuo gained traction in New Zealand after winning the Electronic Album of the Year at the 2014 New Zealand Music Awards for Meraki. In 2016, he partnered with friends to create The Opiuo Band, moving his sound from glitchy bass to electrofunk with the album Omniversal.

“The absolute peak of my whole entire Opiuo existence was playing with the band at Red Rocks [last year]. And then I wanted a new challenge and wanted something that forces me to put as much effort, time and money into an experience for myself and my audience,” Davey-Wright explained. “The Syzygy Orchestra will only be happening at Red Rocks. I think something like [that] can only be seen in the best light, and that place is it.” 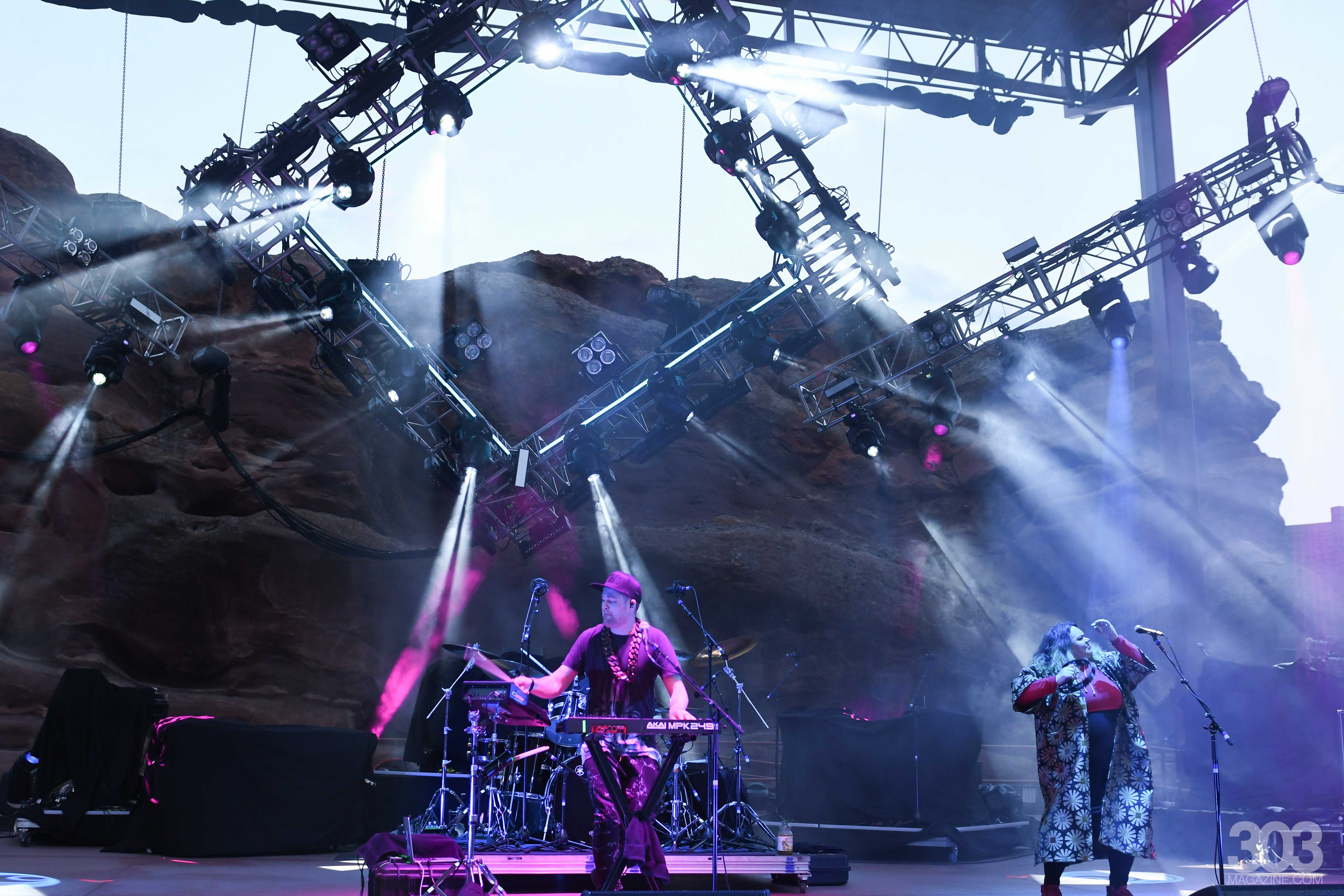 The Opiuo Band at Red Rocks in 2017. Photo by Miles Chrisinger

Denver fans are no stranger to Opiuo’s hypnotic performances. He played his first show in the US at Cervantes’ in 2010 and since has graced the stage at many local venues, as well as festivals like Sonic Bloom. This upcoming show will be his fourth time at Red Rocks and if we were to guess, it will surpass that peak in Opiuo’s existence from last year. This is Colorado after all, and Davey-Wraight understands that we like to go higher, go harder and dance longer than most other audiences.

Denver should consider itself lucky to be receiving such a groundbreaking performance from the innovative musician, but Davey-Wraight might feel more lucky to be able to show love to some of his most devoted supporters. He said,

“Colorado is where, without a doubt, the strongest fan base for music like mine and even just my music is in the world. I don’t know what it is in the water there, but people just support the music. They are passionate about it. They love it. There’s nowhere else in the world like it, on that level.”

Opiuo with his Syzygy Orchestra will take over Red Rocks on April 21, 2018, with Sunsquabi, Flamingosis and Anomalie opening. There’s no doubt that with that lineup, the crowd will be dancing their worries away all night and showing the musicians that special Colorado love. Tickets are on sale here.

In the meantime, enjoy this new music video from the Syzygy 01 album, “Ginger Lizard.”