The Ice Castles are back for the fourth time in Colorado, and soon you can check them out in Dillon. You don’t have to travel to Iceland to witness the magic of blue ice caves, and you can even see them change colors at night. If you’re looking for some wintertime fun that doesn’t require physical activity, the Ice Castles are a must-see spectacle. When it gets colder, they will officially open this season, but currently, the exact opening date is still yet to be announced (it’ll be announced here).

However, the construction of the ice castles is underway. So 303 decided to chat with Brent Christensen, the artist behind the castles. He promises that this season the castles are going to be stunning as always. We’re stoked.

“[It’s] kind of like being inside a glacier or a Narnia-type scene where you have towers and tunnels and archways and everything’s frozen.” 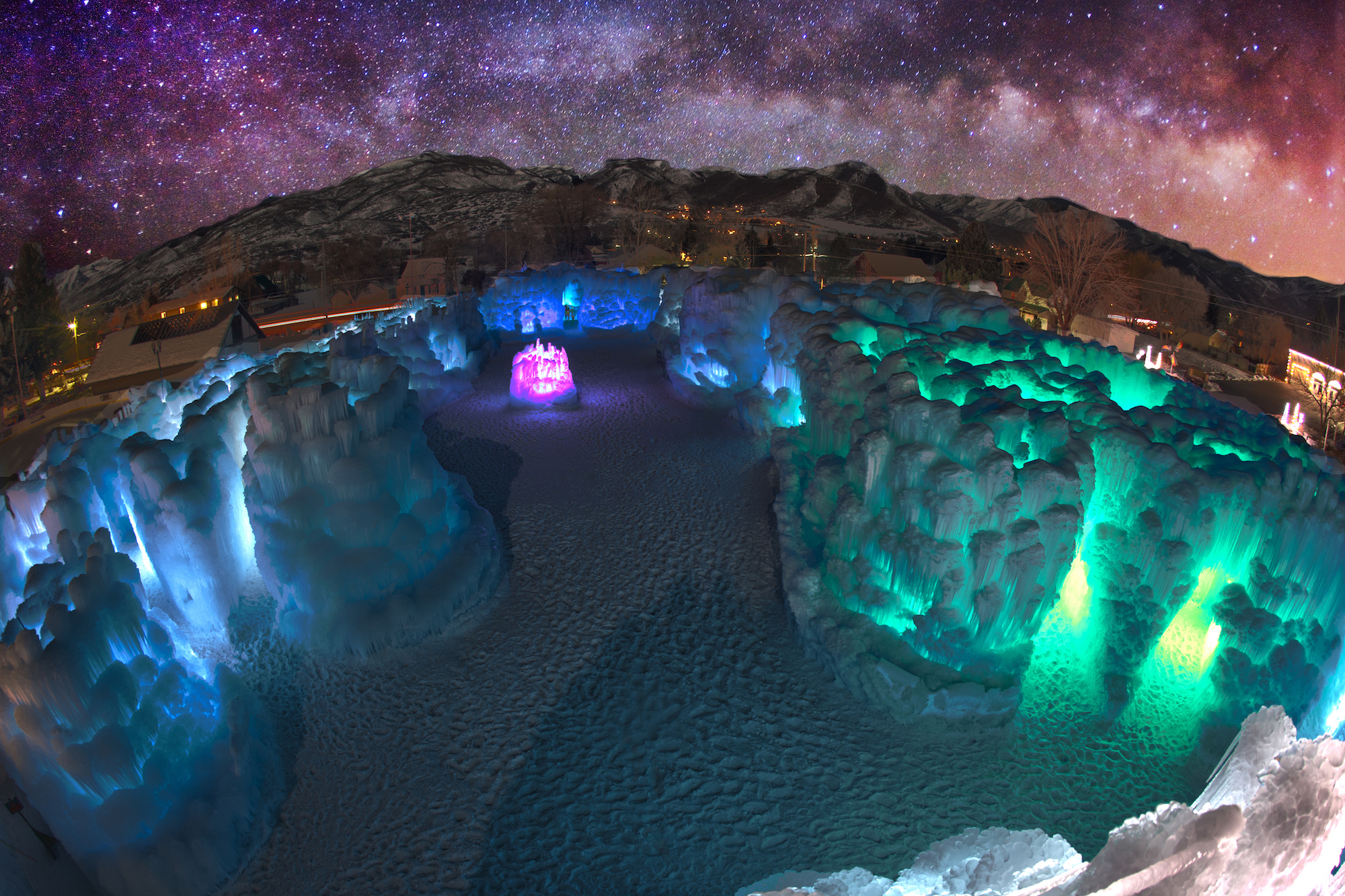 Christensen’s story of how the Ice Castles unfolded is pretty ordinary. He wants readers to know he is not an ice sculptor, and the whole idea originated while he was experimenting in his yard with his daughter.

“It was totally from playing around. We moved from California to Utah and the winters were a bit novel for us. We started building igloos and stuff just for fun and snow forts. One year, I noticed a neighbor down the road had basically a pole with a sprinkler on top and just let it run. It accumulated all this ice—kind of a mound of ice—and that was interesting to me,” Christensen said.

“So I did that. And you can imagine, I just ended up with a pile of ice.”

The following year, Christensen made another attempt with a wooden frame to support the ice that featured a slide, and he said it worked, but when it melted, he had a giant mess of splintered wood. Then he started to brainstorm ways to create an ice castle without wood.

The winter after that, he created an igloo of ice blocks and sprayed water on it. He used snow and water, and partway through the process, he started breaking off the icicles and fusing them back on the structure.

“That’s kind of when the big light bulb turned on. I learned that by using icicles as a building material, you can do really crazy stuff,” Christensen said.

Christensen took pictures of his castle to many resorts in the area to see if they would replicate it, but it was only a smaller resort that agreed to attempt the creation. After the Ice Castles gained popularity, the phenomenon began. Christensen has officially been building his castles since 2010, and cities all over North America have asked him to make them. This season’s castles will be in Midway, Utah, Stillwater, Minnesota, Lincoln, New Hampshire, Winnipeg, Manitoba and Edmonton, Alberta in addition to Dillon.

Christensen is ecstatic about the popularity of the castles and thinks it’s really amazing his ideas have come to fruition, but doesn’t credit his art background for his success.

“I’ve always enjoyed art. In college, I studied commercial art. I didn’t end up going into it, but I’ve always enjoyed inventing and creating things. I kind of got lucky with this one, and it turned out really well, but there’s nothing someone could study that would help you to do this,” Christensen said. 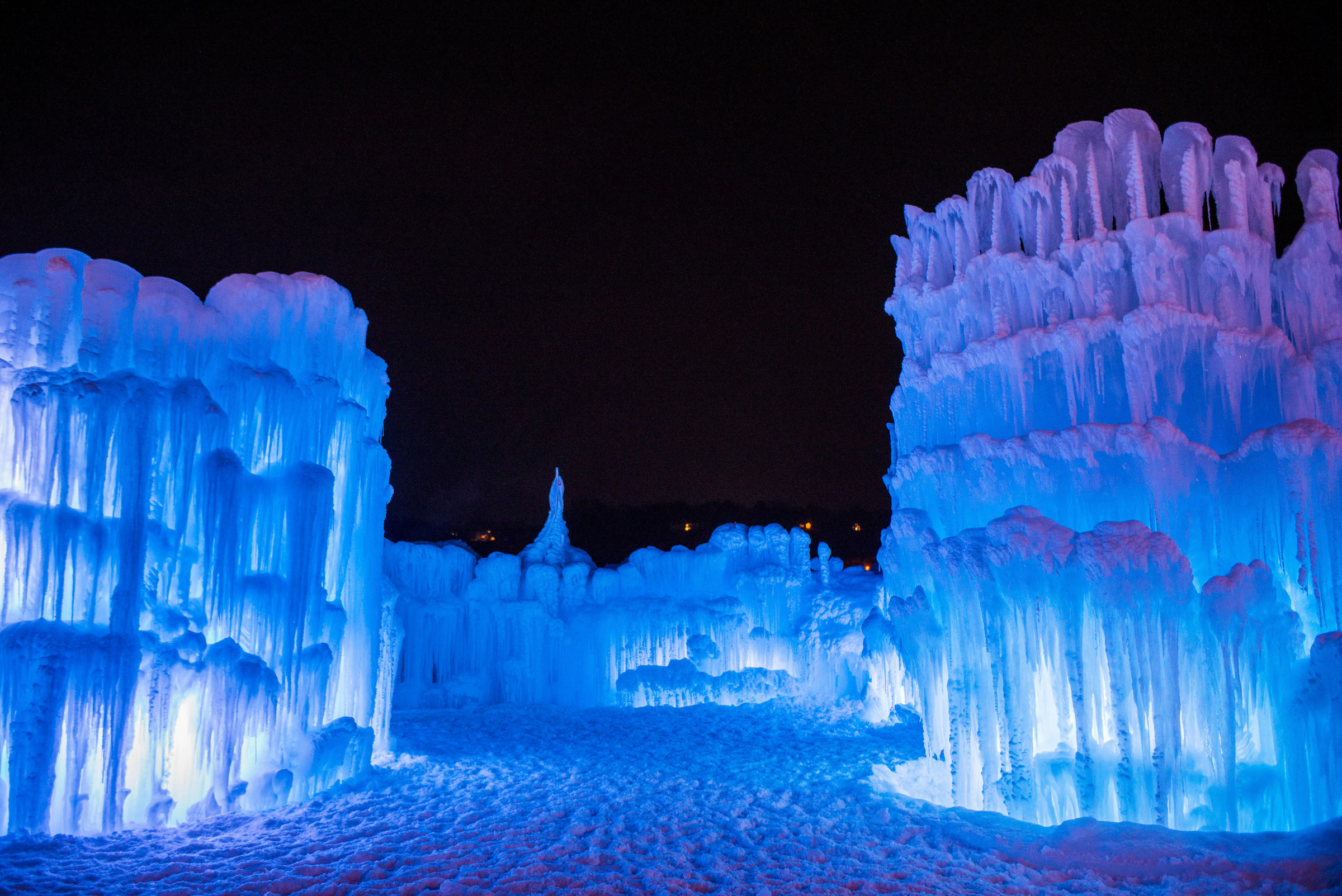 The Ice Castles came to Silverthorne and Breckenridge in years past, but this is the first season for Dillon, which has volunteered to create and host the magnificent structures. Standing at 15-25 feet over nearly three quarters of an acre, Dillon’s Ice Castles will be located in Dillon Town Park downtown. Between 20-50 workers in the region have started making the ice, and Christensen said the whole process takes three to four weeks with cold temperatures and several thousand hours of labor.

According to Christensen, the decision for the Ice Castles to return to Colorado was because the city of Dillon wanted them to.

“It’s a matter of finding someone who’s interested in having us. The cooperation of the city is super important. We can’t do it without them. They have to be interested,” he said. 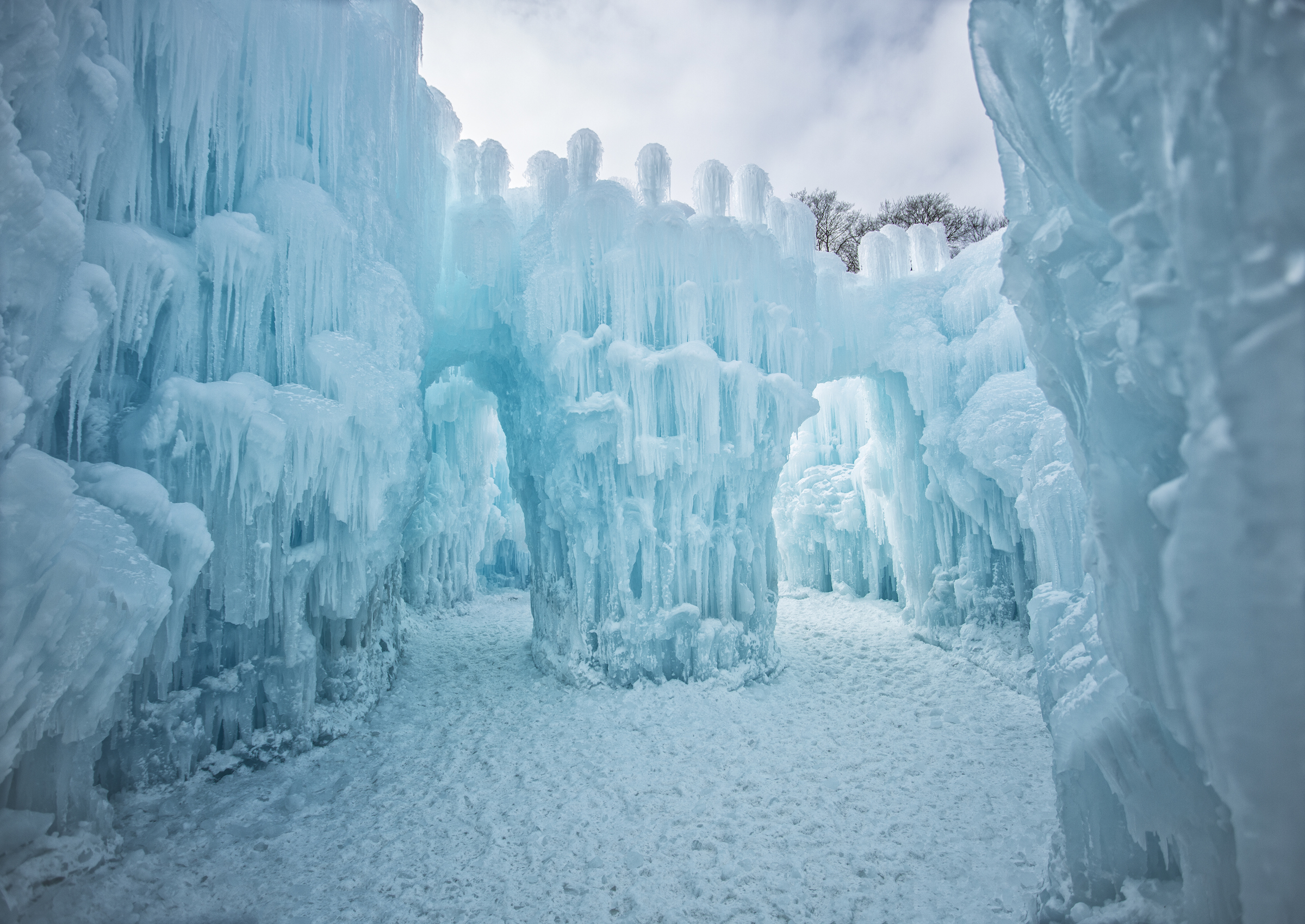 Christensen says it’ll be an exciting experience for visitors, but if you want to know what the castle is like, you have to go for yourself.

“The easiest part is to describe what it’s like to be in them. And that’s kind of like being inside a glacier or a Narnia-type scene where you have towers and tunnels and archways and everything’s frozen. You’re surrounded completely by ice and the lights are super cool at night. Even though we have handled it, it [the castle] is really created by Mother Nature and has a natural feel to it as well. It’s surreal, but feels like something nature made,” Christensen said.

The Ice Castles are open during both night and day, and Christensen said that both times to go are breathtaking. At night, the Ice Castles are especially popular because they light them with white and colored lights that change to illuminate beneath the night sky. 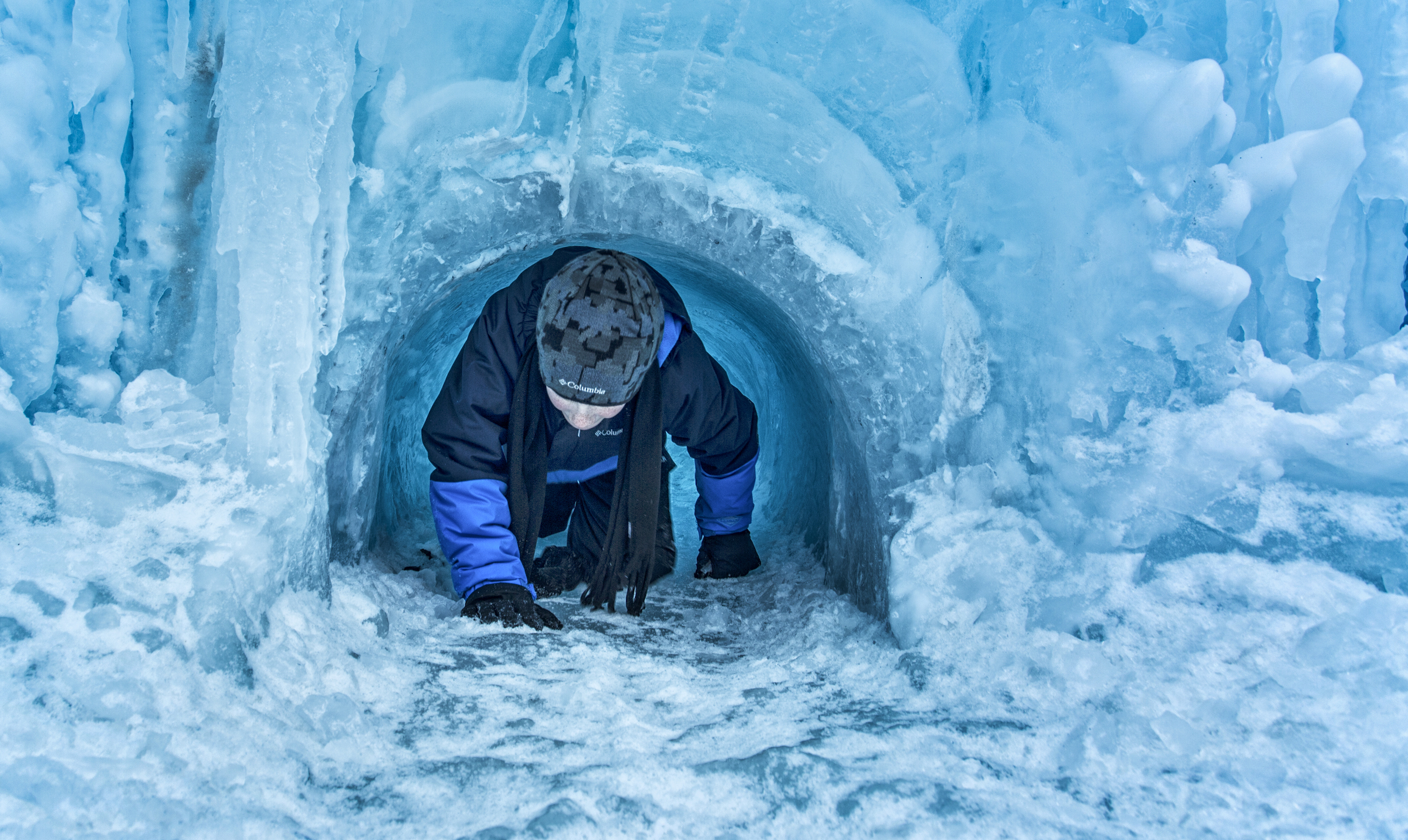 But Christensen thinks you should go during the day too.

“In the daytime, they’re white or blue depending on the sky and what part of the castle you’re looking at. The thicker the ice, the bluer it tends to get just because it absorbs colors. And on a snowy day, it gets super blue because the water absorbs everything but the blue. It’s more pronounced. One of my favorite times to go is a bright and sunny day because you have pure sunlight going through the ice,” he said.

This season’s Ice Castles will also feature towers, tunnels, a fountain and a slide to crawl through, but you can’t climb on them due to safety.

As for the icicles, Christensen assures us the experience isn’t dangerous.

“It’s very safe. That’s our number one concern. The only way an icicle can fall is if you knock it down. When they melt, they [the icicles] melt from the skinniest point, which is the tip, and an icicle hanging on your rain gutter can only melt away from your roof because it’s made of wood or metal. An icicle hanging from ice just hangs on,” he said. 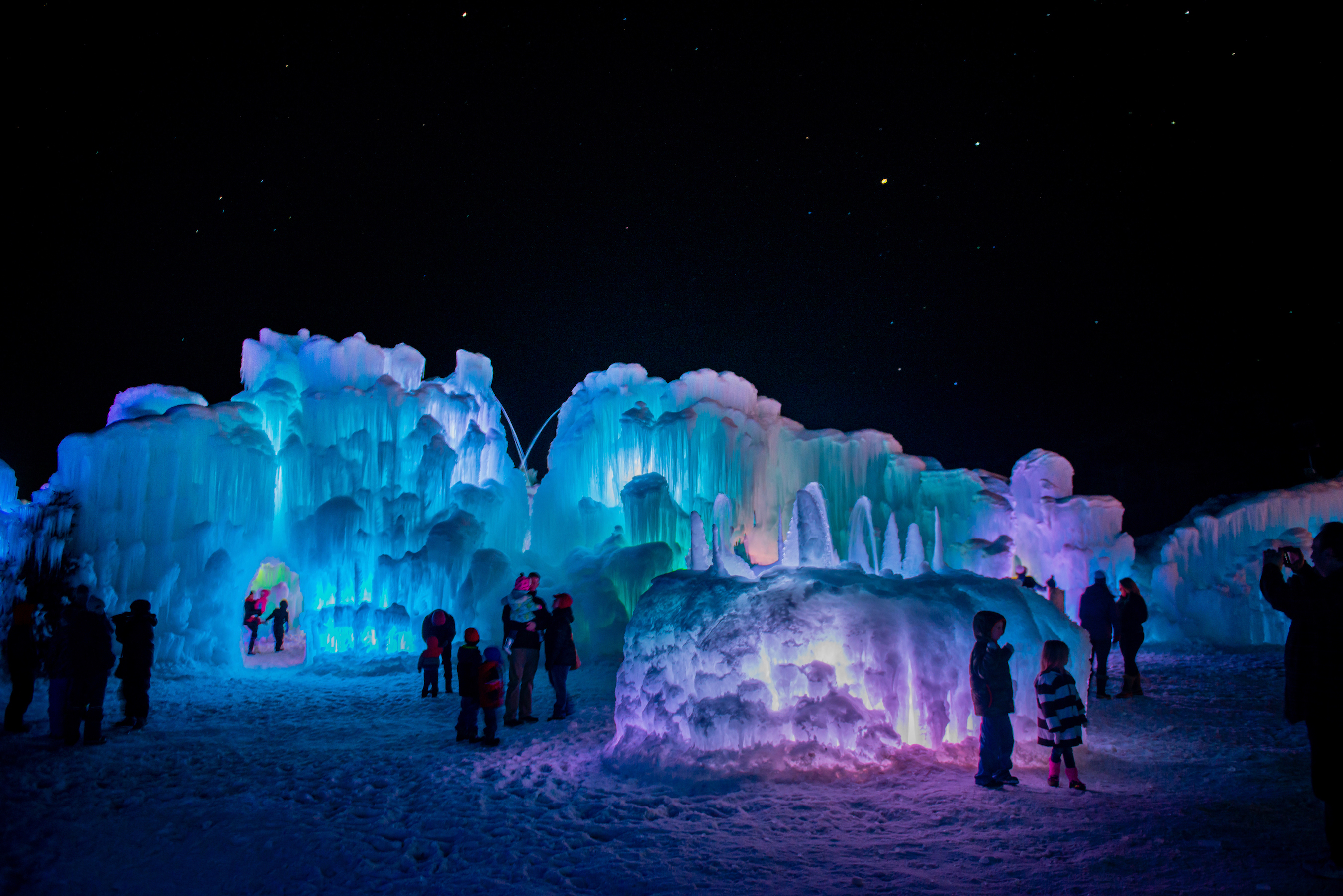 You don’t have to worry about falling icicles, but you do have to worry about the castles melting before you see them. The Ice Castles typically only last for six to eight weeks once they open due to temperature changes, and Christensen said one year in Utah it was so abnormally warm, the castle closed after only three days.

So, make sure you don’t miss it. It doesn’t get much cooler than this, and it’s a nice escape according to Christensen.

“The rest of the world kind of disappears when you’re in there.”

For more information on the official opening day, times and ticket prices, check out the Ice Castles website.