For the third year “Take this and Keep Warm” is returning to Denver’s Civic Center Park. Organized by Coley Uriona, the event aims to help people experiencing homelessness by inviting others to leave “scarves, hats, gloves, coats and toiletry bags” in Civic Center Park. Each item will be accompanied by a note that says “I am not lost, please take me and keep warm.” She was inspired after seeing similar events take place in other US cities and decided to start one of her own. The event also has a personal connection since her father Craig aka C-Loc experienced homeless for the last 13 years. 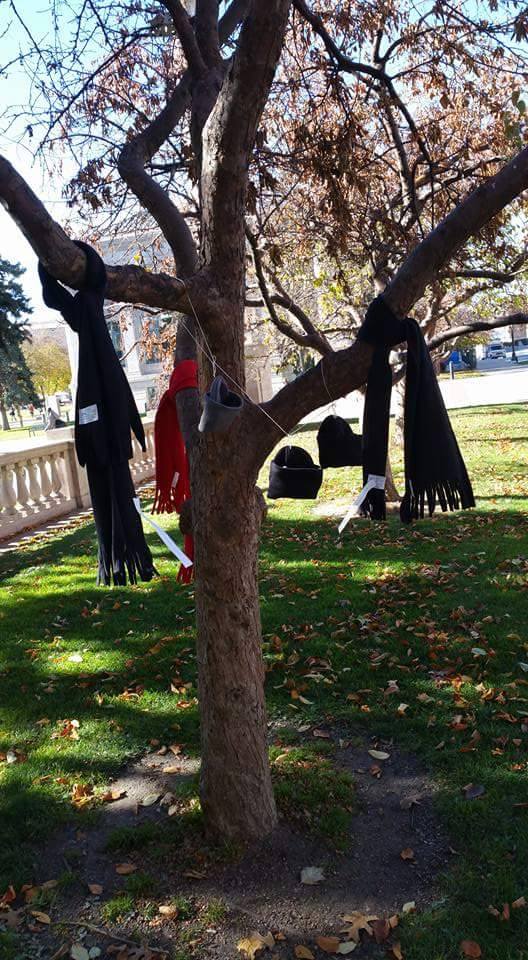 From a past “Take This and Keep Warm” event. Photo courtesy of Coley Uriona

“I know the struggle of winter months for homeless street people. At the time I started it, my dad was in a shelter. So I would have him tell people around on the streets about it,” she said.

Unfortunately last winter her father lost his place in the shelter and was living on the street.

“He did not contact any family to tell them. I believe he was embarrassed to tell us and stubborn that he could survive because he had done it before. But unfortunately, he didn’t this time,” she said.

According to Uriona, her father passed away from hypothermia in December after a snowstorm. As a result, she is dedicating this year’s event to her father and she has already seen a huge growth in interest. So far, nearly 4,000 people are interested in attending with over 600 committed to come.

“This is has blown up so much I really have no clue why. The only change is me dedicating it to my father who did pass last December. So maybe that is why it is so big, or third time is a charm,” she said.

According to Uriona, each year no items are left behind. But if any items remain or are too big to leave they will be taken to the Denver YMCA.

By leaving items in the park, Uriona explained she hopes to reach people who don’t go to shelters to get help.

This year’s event comes before colder weather hits Denver. Last year, Denver saw a spike in deaths in the homelessness community, with about 15 percent of those deaths occurring during the winter. The number reached 84 versus 50 in 2015, due to various causes. However, experts agree that exposure to the elements is an overall contributing factor to the short lifespan of people living on the streets. On average, the life expectancy of a person experiencing homelessness is between 42 and 52 years old compared to 78 years old for the average American.

This weekend’s event takes place on Sunday, November 12 from noon to 2 p.m. Attendees are encouraged to bring their own items to donate. It is open to the public.