Some people have one thing, one talent, or one goal that defines their entire life. Action Bronson is not one of those people. Before locking down a large following in music, Bronson was a highly respected fire-flame gourmet chef in New York City who also hosted a popular online show, Action in the Kitchen. After breaking his leg, he decided to focus solely on what was once just a hobby — rap music. This has led him to tour around the world, not only to play music but to also showcase his favorite international dishes on his Viceland show, F*ck That’s Delicious. He brought his many interests and talents to the Ogden Theatre on Thursday night, and Bronson, otherwise known as Bam Bam or Bronsolino, made it one hell of an interesting night. 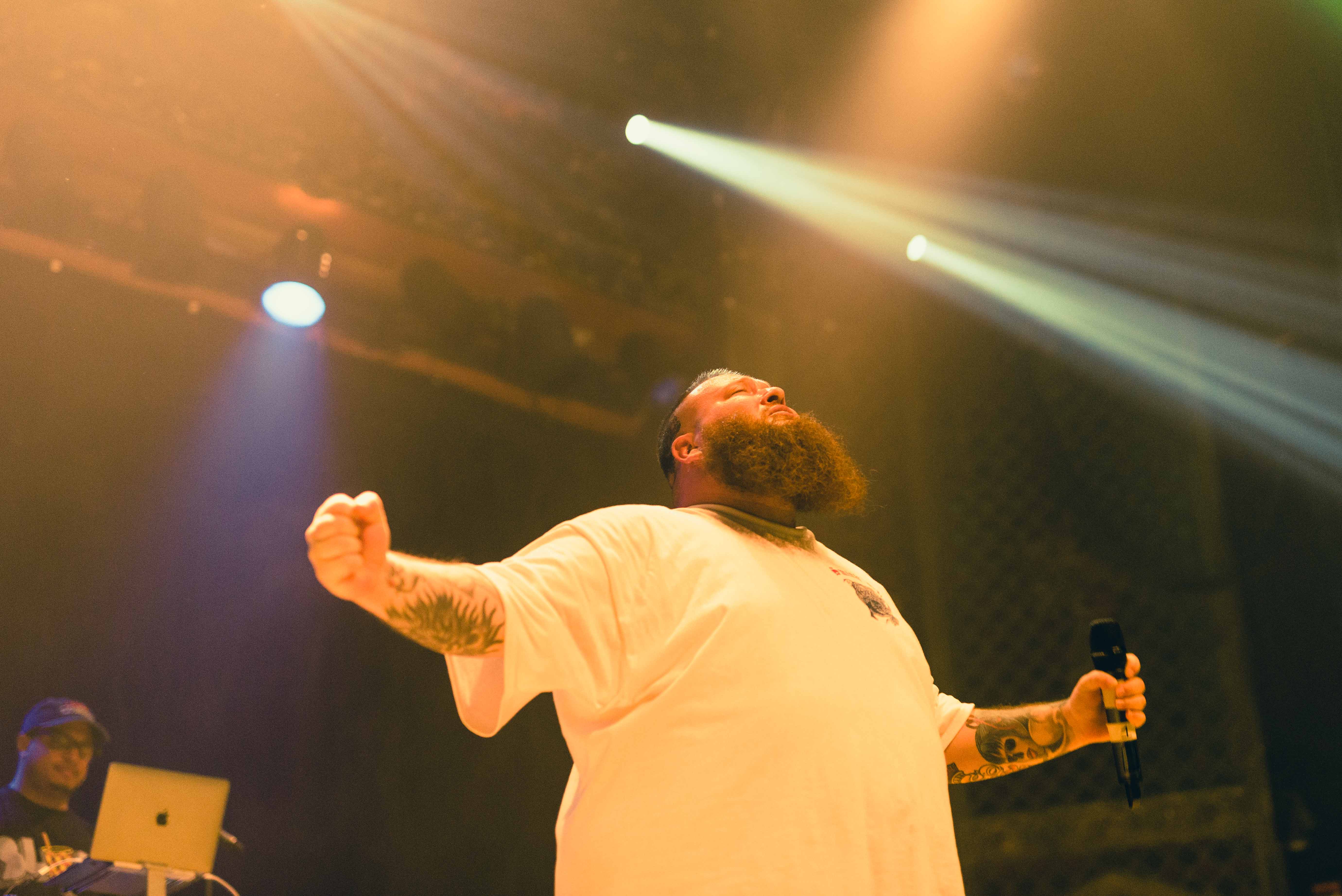 Before walking into the iconic Denver theatre, the line headed into the venue was a show all on its own. On one side of the aisle, a long-haired hippie walked up and down the front of the venue, puffing what was sure to be a viable contender in the world’s largest joint competition. Interestingly enough, security did not have much to say as he chiefed away, even sharing with bystanders. The other side of line was less relaxed, due to a self-prophet proclaiming messages of religion and general misguided information considering the audience.

Opening for the evening was many-time Action Bronson collaborator, and entourage member on F*ck That’s Delicious, Meyhem Lauren. Lauren started his career being known for his street-smarts and lyrical genius. As he spit his rhymes, it was evident to all why this musician would be placed on a bill next to Bronson, especially since his upcoming releases will feature the Denver headliner. Lauren made it clear that while he loves Denver and the mountains, his true heart belongs to Queens, however, he still gifted the fans with merch by throwing t-shirts into their waving arms, unconcerned at the risk of catching one of the many lit joints in the crowd.

Just as Lauren shook up the seemingly stacked hip-hop night, the next opener threw the entire room for a loop. If anyone is unfamiliar, as we are sure many at the show last night were, Trash Talk is a punk group from LA that has made a name for themselves for having solid relations outside of typical punk circles. Since having signed to Odd Future Records in 2012, the group became the first non-hip-hop artist to be signed on the label and has been known to perform alongside Tyler, The Creator. 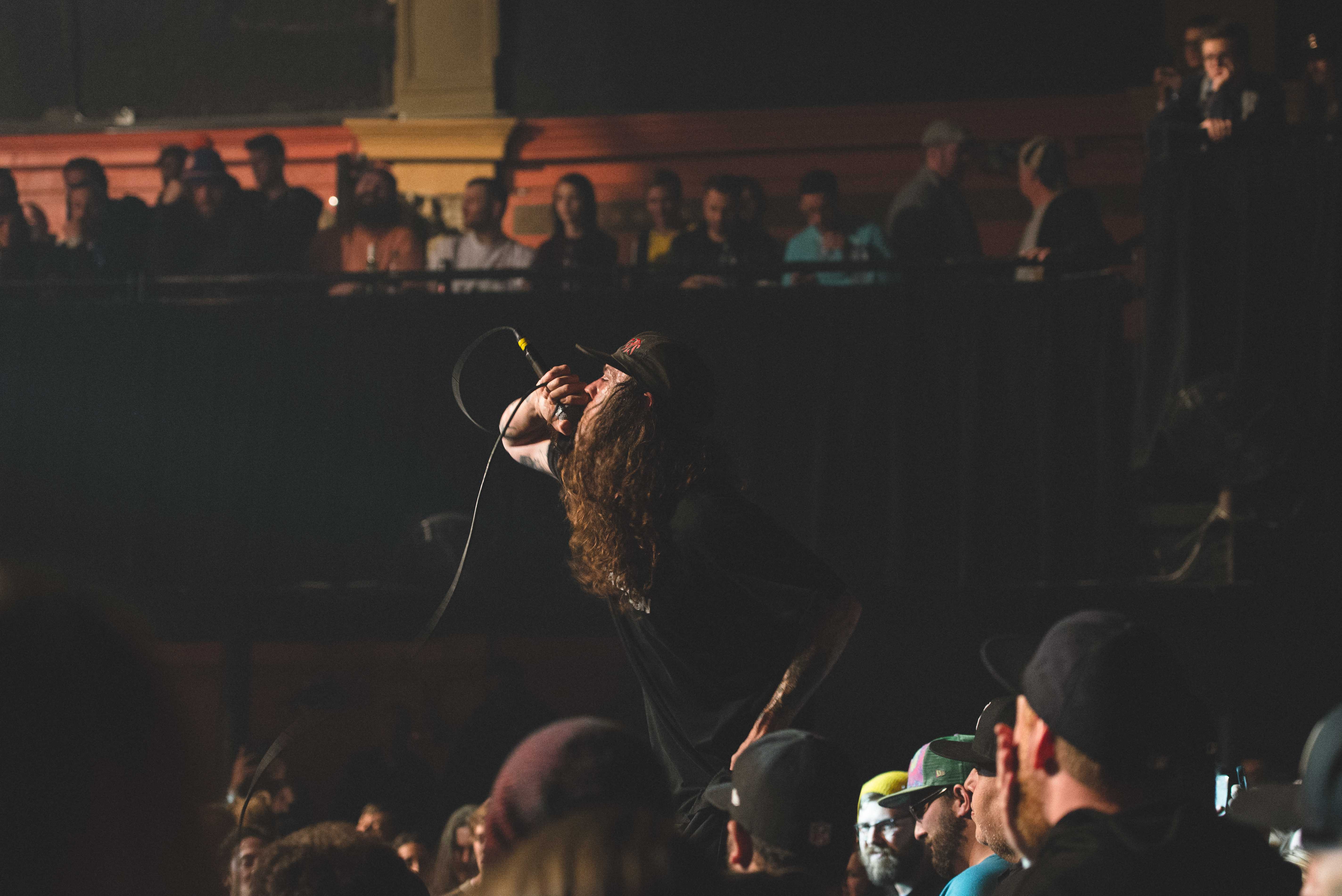 The five-piece group took to the stage to some visibly confused patrons and began their set of thrashing guitars and screaming lyrics — a heavy contrast to the expectations that most Action Bronson fans were surely used to. However, Trash Talk has a deep following of their own, of which many Denverites proved to be a part of as the mosh pit took hold in the front of the stage. It took a minute, but after a while, the two sets of fans set aside their differences and eventually the entire room appeared to be enjoying the anarchy.

“Move around a little bit, spill your IPA,” exclaimed Lee Spielman comedically, frontman of the group.

Lead singer Lee Speilman jumped in and out of the crowd as the band showed off synchronized dance moves, threw microphones in the air, and, in the last song, tossed a guitar up to the VIP balcony in a shocking example of good faith. While the sound was certainly very different, the segment was good and kept the crowd alive for the main attraction. Just before 11 p.m., the excitement of the audience spilled out into chants as Action Bronson took the stage, blasting off with tracks from his recent release, Blue Chips 7000. The large lyricist spurt rhyme after rhyme, many of which were also being recited by the waves of fans in the crowd. 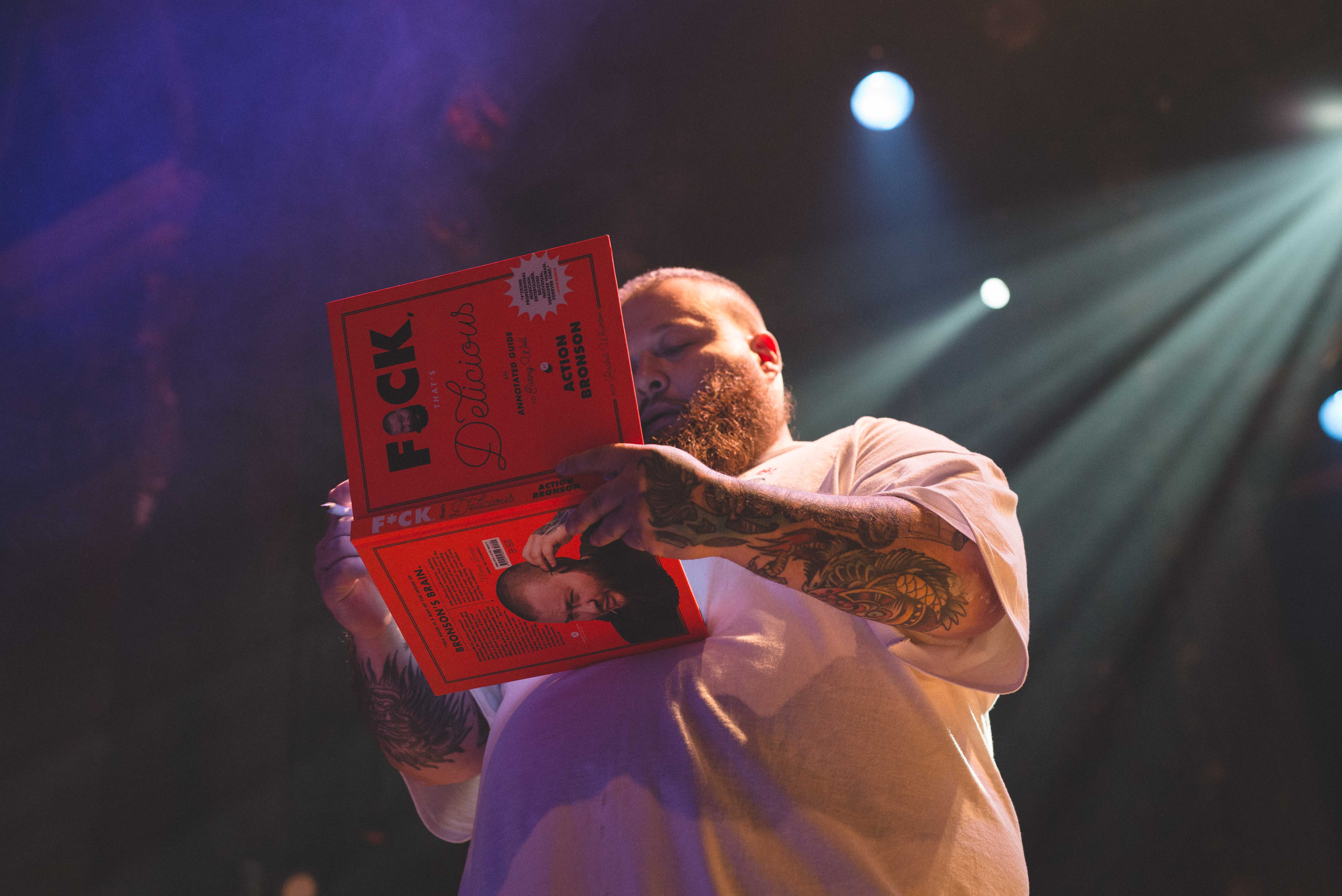 Several of his cookbooks, also named F*ck That’s Delicious, were hoisted up in the crowd, each of which the author took the time to sign before Meyhem Lauren came back out to join his friend onstage to perform “Mr. 2 Face.” Lauren wasn’t the only special guest there last night, however, as the Instagram celebrity “Dabbing Granny” was also said to be in attendance. The atmosphere felt much more unified with Bronson on stage, and as the smoke filled the air, even a man of his stature was hard to make out from the back balcony, which stayed pleasantly uncrowded. Through new and old hits, the attention remained on stage with the rapper and his support on the tables.

“297 pounds of pure beef is what you’re looking at,” said Bronson, referencing his figure.

Bronson took a brief moment to walk off stage, and when he returned, he came back with guns blazing. He jumped into “Strictly 4 My Jeeps,” which, after starting, he claimed he forgot the words and had to restart, causing an uproar of energy leading into the second take.

After bumping through his track list, Action Bronson announced that F*ck That’s Delicious season three will return to Vice in January, as well as the Untitled Action Bronson Show. After his announcement came the most hyped track of the evening with “Baby Blue,” which lacked the featured Chance the Rapper, yet met all expectations of its live capabilities. After splashing his face down with a water bottle and busting out a few more bangers, Bronsolino had given Denver the show they had asked for (and then some). When Mr. Wonderful returns, he will have plenty of friends in Denver.