Wewatta Point Docks in LoDo with Seafood Worth Seeking

Denver seems to be going coastal in 2017, with more and more fresh seafood options set to open all year long. LoDo’s newest seafood spot, Wewatta Point, is no exception.

READ: 35+ Restaurants, Breweries and Distilleries to Open in Denver Before 2018

It is the second location for The Point Restaurants; its sister restaurant Laurel Point is in Studio City, California. The two Point restaurants are part of Grill Concepts — a restaurant group with five concepts and more than 30 restaurants scattered throughout the United States. It also owns Wewatta Point’s next door gastropub neighbor, Public School 303. 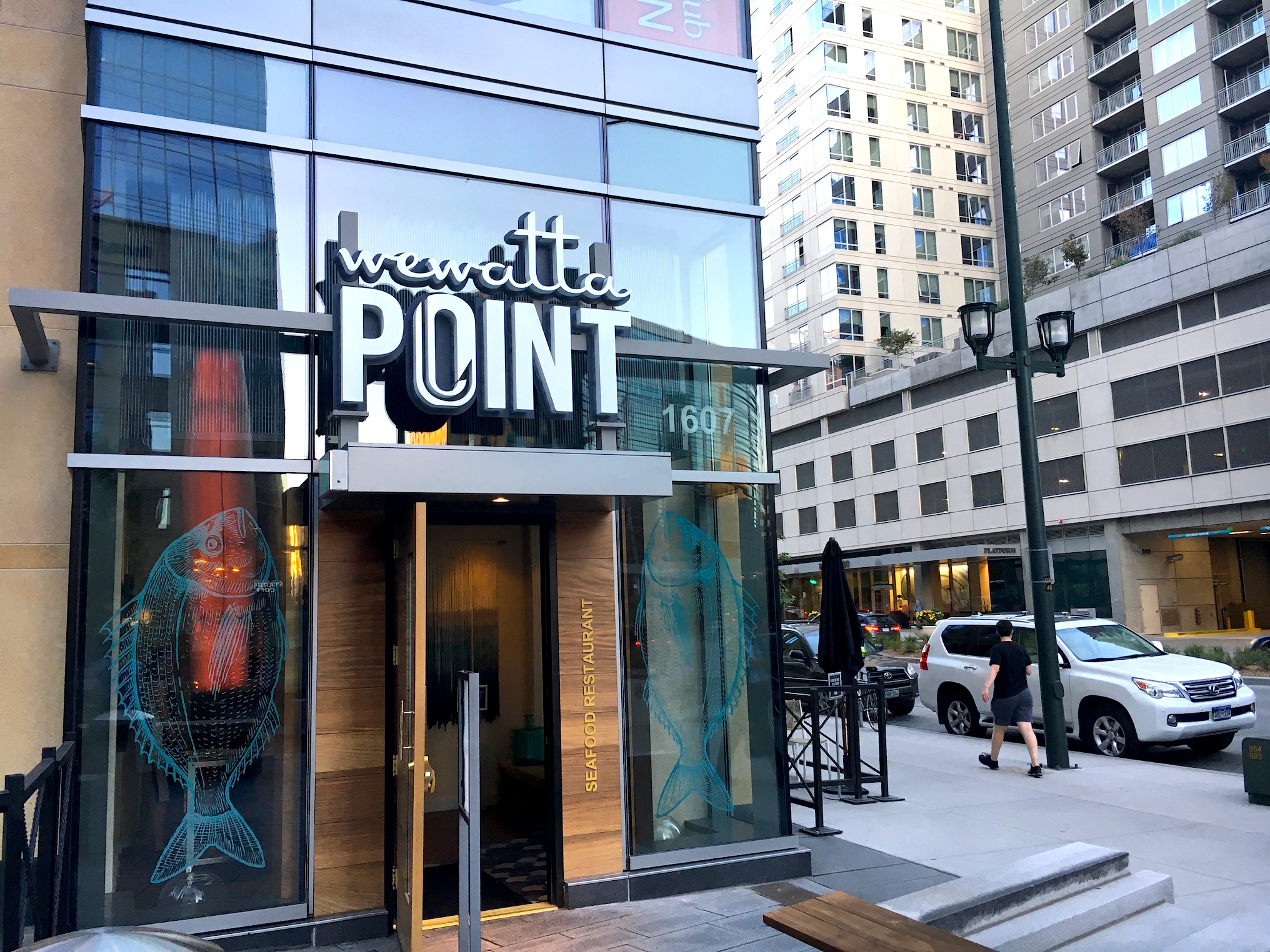 Opening in the cluster of new restaurants neighboring Union Station — including Tavernetta, Urban Farmer, Tupelo Honey, Citizen Rail and more — Wewatta Point brings the most nautical touch to the bunch.

Although it’s metropolitan on the outside, the interior is more bright and airy with white vaulted ceilings and touches of nautical blue throughout. The long, white marble bar provides ample seating for what’s sure to be a busy happy hour, and lights shaped like lobster traps line the ceiling. The environment is more casual than what you’d expect from a place with such great seafood — there’s even a couple of TVs scattered throughout.

Wewatta Point reminds us of a place you’d have dinner on the actual coast — the atmosphere is relaxed, but the quality of the fish and service is that of a fine-dining restaurant.

The menu is directed by Grill Concepts and The Point Restaurants’ corporate chef Lee Velasco, and is backed by fresh seafood shipments every other day.

“These oysters we’re serving were in the water in Buzzards Bay, Massachusetts this morning,” said general manager Jason Isch.

Formerly managing at Acorn and Brider, Isch is from Cape Cod originally and the Wewatta menu has his authenticity stamp of approval. In his own words: “In the least corny way possible, it just tastes like home to me. We don’t complicate the fish. It’s fresh and doesn’t need to be overly manipulated.”

He’s right. The jumbo lump crab cake appetizer ($17) is a ball of perfectly seasoned crab — not breadcrumbs — with a whole grain mustard sauce spiked with citrus, and the lobster roll ($25) is stuffed with chunks of the butter-poached delicacy. Served with grilled lemon and French fries or slaw (get the fries — they’re perfectly seasoned) — the lobster roll is made even better by the brioche bun from Harvest Moon Bakery. Isch said they searched for four months to find the perfect bready companion.

Perhaps the most notable dish is the whole Thai snapper for two ($49). Served with a cilantro-ginger vinaigrette and herb salad, the wild-caught red snapper is served whole, scored and flash fried. It’s quite the head-turner as it floats through the restaurant.

It’s not all seafood at Wewatta Point, though. We found ourselves tempted by a selection of entrees centered around various cuts of meat — mostly the pork chop ($24) cooked in a sous vide for six hours and served with sweet potatoes, charred broccoli rabe and shiitake mushrooms or the Point Burger ($15) smothered in pimento cheese.

The food is served alongside a selection of craft beers and cocktails made with freshly squeezed juices and house-made syrups. We couldn’t get enough of the Pear Necessities ($13) with vodka, spiced pear puree, lemon and cinnamon sugar — and we’re sure we’ll be back for more.

Unless noted, all photos courtesy of Wewatta Point.