The development around Union Station is not slowing down anytime soon — case and point, Citizen Rail and its adjoining hotel, Born, are set to open this Tuesday, August 15. Citizen Rail, Denver’s newest restaurant, comes from the mind of executive chef Christian Graves, who hails from San Diego. The veteran chef, known for his work at JSix, draws his inspiration from the dual wood fire grill at the heart of the restaurant — where much of the menu will find its flavor. But the grill is not the only secret weapon this new restaurant has.

Typically in our previews, we leave this section to speak about the design of the restaurant. But what we found behind the counter is way more pertinent.

Next to the large custom kitchen, and within feet of the wood fire, is a walk-in cooler already filled with aged meats. The dry aged room is where a select amount of the restaurant’s locally sourced meats will sit and cure for around 28 days. For chef Graves, this is his “happy place,” because it’s where he’ll develop additional special projects — including aging items like short ribs. But the dry age room is only the beginning for the meat program at Citizen Rail. Behind the dry age room, in the far back corner of the kitchen, you’ll find an elevator. Press the button to take you up to the third floor and you’ll discover a whole second kitchen for Citizen Rail as well as Hotel Born. Inside the ancillary kitchen is where you’ll find Andrew Gonzales — Citizen Rail’s full-time butcher. 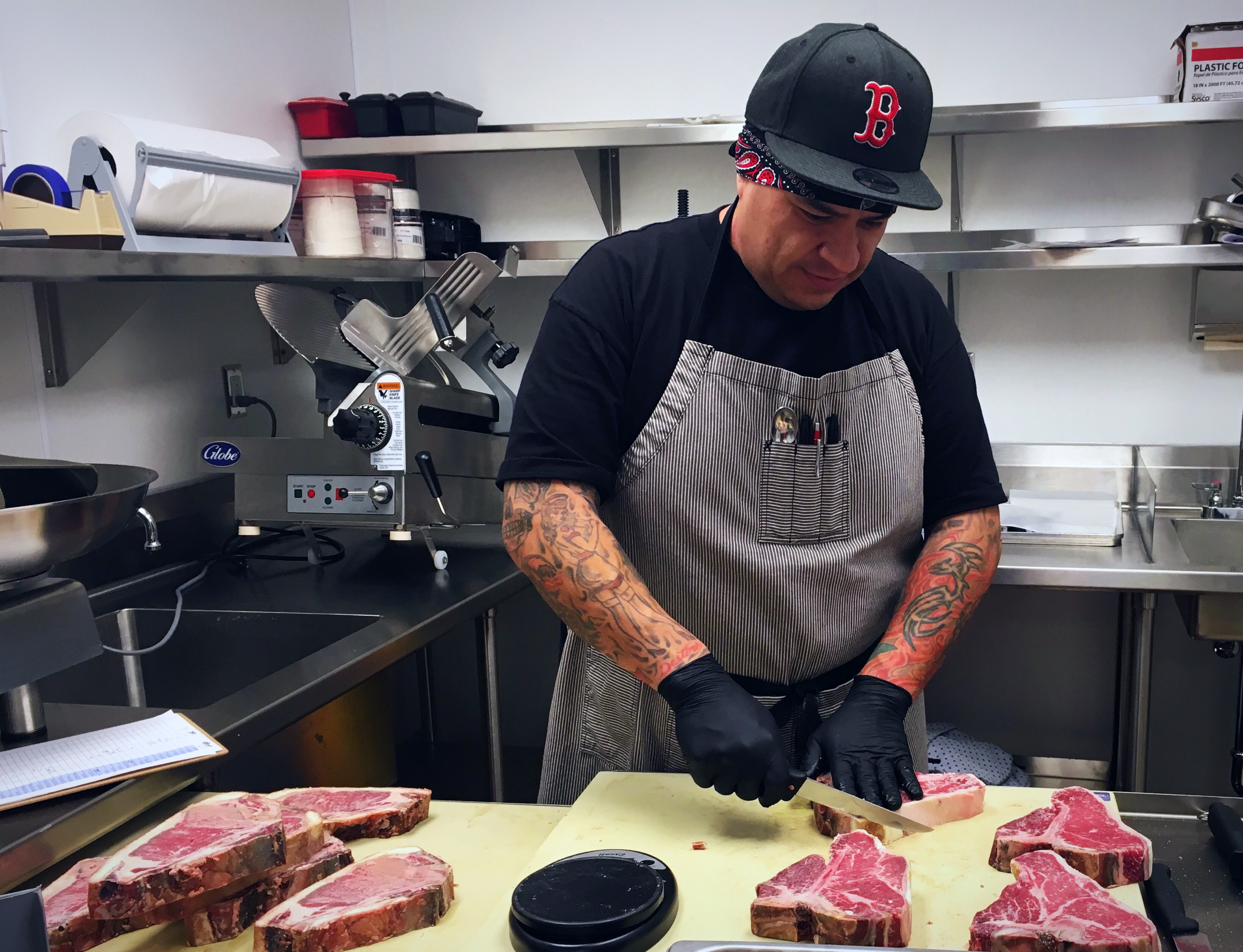 Gonzales, a 37-year-old Colorado native, has only had two jobs in his life — construction and butchering. He prefers the latter and has been doing it in some form since he was 14 years old. He fell in love with the profession while working in a local grocery store. Later he found a job at Sam’s Club where he gained enough acclaim as a butcher that Whole Foods personally sought him out to work in their Colorado stores. He worked at Whole Foods for seven years, learning the ins and outs of the industry before moving to Boulder Natural Meats, where he spearheaded their red meat program. To say Gonzales is knowledgeable would be an understatement. So it’s no surprise that when he applied to work at Citizen Rail, he got the job immediately.

“I put in my application at midnight and they called me the next day at 6 a.m.,” he said.

Gonzales will be responsible for Citizen Rail’s whole animal butchery program, where he’ll break down everything from whole lambs to pigs and even game birds. “We’ll go as big as we can fit in here,” he explained. Many of the meats will be sourced from local sustainable farms like Aspen Ridge, where the team gets their beef, or Frontiere Natural for game animals like bison. Other items like chickens come from Petaluma in California or Broken Arrow Ranch in Texas where the venison is often still hunted instead of processed in a plant.

“Everything we have is all steroid, hormones and antibiotics free that we’ll sell here,” said Gonzales.

Purveyors will rotate out as necessary because according to Graves, his philosophy is “local first.” But while the meat is at the heart of the restaurant, you’d be mistaken if Citizen Rail was about pure carnivorous attitudes.

The Food and Drink

Despite Citizen Rail’s overt appreciation for all things meat, Graves believes it’s not necessary for someone to eat it every day. Rather, he explained through his careful sourcing he wants to show people how to “savor it more and eat it on occasion.” This statement may be perplexing when you see Citizen Rail’s behemoth portions like the 32-ounce Tomahawk steak (for two). But, if you veer away from the red meat section, you’ll find thoughtful vegetable dishes like the crispy artichokes with Dungeness crab, Persian cucumber salad or the vegetarian entree made of a chickpea cake with heirloom tomatoes, roasted corn and eggplant and blistered vegetables.

Fish is also a big component of Citizen Rail’s menu. And like the steaks, the fish is also prepared on the wood fire grill. But instead of using traditional mesquite and hickory woods, like they use for the red meats, the fish is cooked with more delicate woods like oak and fruit woods such as apple and peach. On this side of the menu, the grilled hamachi collars are likely to be a hit as is the ember roasted whole Maine lobster. But if you ask Graves his favorite? He lands squarely on the hickory oxtail with rice porridge.

Last but definitely not least, we have the drinks. Concocted by lead bartender Chris Burmeister, the drink menu consists of an eclectic collection of 300 bottles. There is not one particular focus in terms of booze, but Burmeister explains there is a strong showing of mezcal. This makes sense considering the smoky attributes pairs nicely with the food. This is shown no better than in the Plunder Road. The “milk punch” is an arduous drink to make but the result is nothing short of a stroke of genius. Clear in color but vibrant in taste, the Plunder Road has a hint of smoke from the mezcal that is smoothed out by the diary and cantaloupe. It’s refreshing but also deeply satisfying — making for an addicting drink. It’s likely you’ll be able to have just one.

Citizen Rail opens on Tuesday and joins the most bustling area in Denver. It’s likely with the attached hotel and the nearby train station Citizen Rail will not want for customers. But that doesn’t mean the new restaurant will lack in the competition. With the forthcoming Tarvnetta from the team at Frasca (aka one of the most decorated restaurants in Colorado), the team at Citizen Rail will have their work cut out for them. From what we can see, they are more than ready for the challenge.

Citizen Rail is located at 1899 16th Street in Denver. It is open for dinner Sunday through Wednesday from 5 until 10:30 p.m., with the bar, open until 11:30 p.m. Dinner is offered until 11 p.m. Thursdays through Saturdays, with the bar open until midnight. Citizen Rail will have with daily breakfast service from 6:30 to 10:30 a.m from Monday through Friday. Brunch is Saturday and Sundays from 8 a.m. to 2:30 p.m. and lunch service is Monday through Friday from 11 a.m. to 2:30 p.m.