It’s not often you come across a truly modest band at a sold out show. Some performers don’t seem to revel in the feeling of playing to a full house and some just fake it ’til they make it. But not Sylvan Esso. The duo intertwined their modesty with a nonchalant attitude, even looking as if they would burst into tears of joy at times. They actually seemed to care about their fans, brushing everyone with an odd combination of bad-ass and bashfulness — all while bonding with the masses. You know when you see a band live and you leave the show feeling as if you want to be their best friend? Sylvan Esso was one of those shows.

The duo, comprised of Amelia Meath and Nick Sanborn, created Sylvan Esso in 2013. The band came to fruition after Meath and Sanborn had paid their dues with other musical projects, including Sanborn’s solo project, Made of Oak. On August 10 at the Ogden Theatre, the duo played for a sold out Denver crowd only months after the release of their sophomore album, What Now. 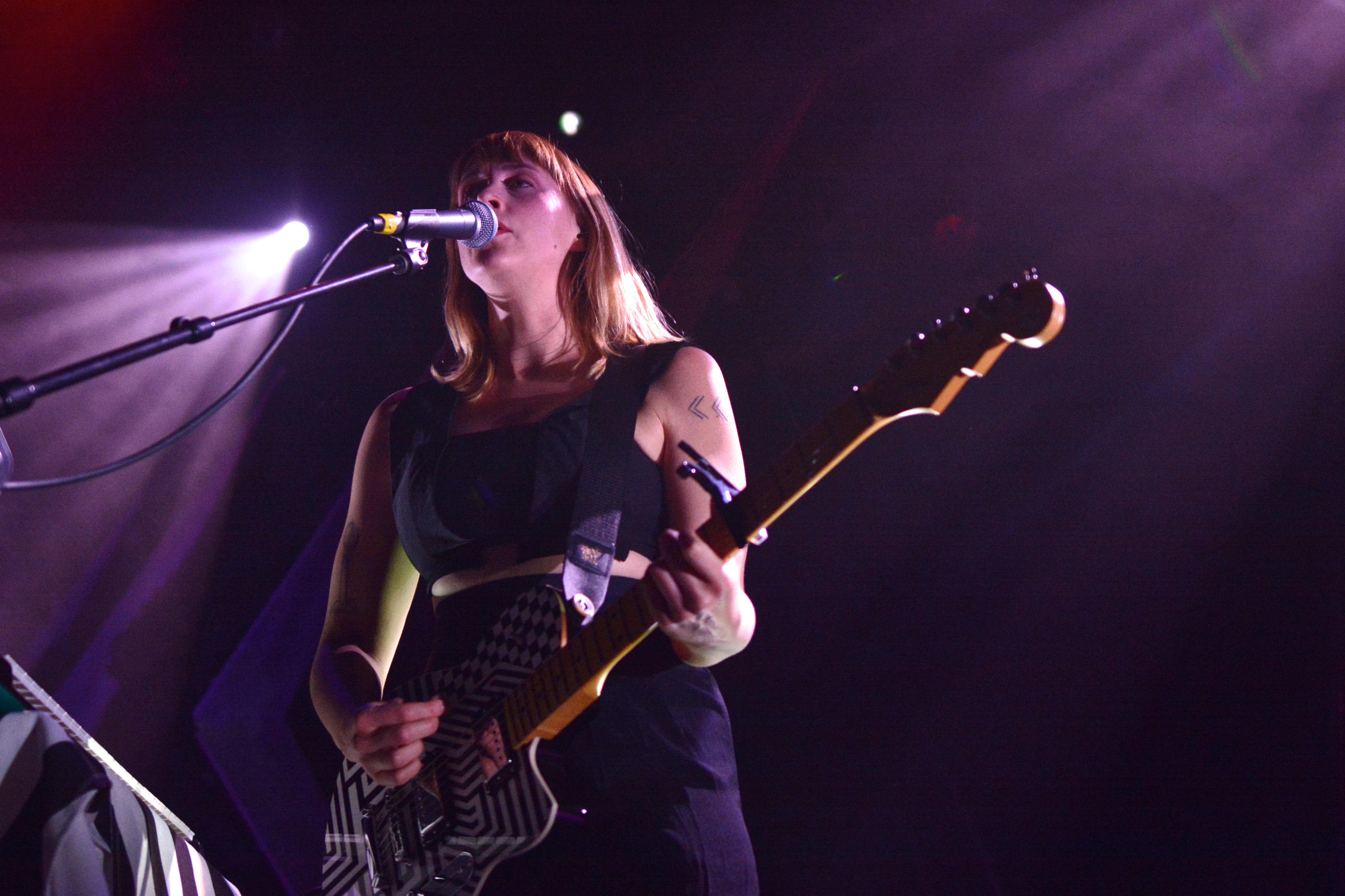 It would be a shame not to talk about the opener Flock of Dimes — a one-woman-band conducted by Baltimore’s Jenn Wasner. Wasner approached the stage with a stylish and sexy checkered guitar. She played previously recorded synth and percussion back tracks, all-the-while alternating playing bass, guitar and keyboard synthesizers. Wasner’s brilliantly beautiful vocals were reminiscent of Meath’s, equally using the occasional auto-tune and flawlessly sweeping through falsettos.

“I feel like every time I come here [Denver] I get weathered the fuck out. I got winded just changing earlier. I love it though.” – Wasner

Wasner travels under other aliases. She even told Denver something she’s never mentioned before because she was “feeling very loose” – her project was initially called “Blue Walls.” She claims to have coined the term as the female equivalent of “blue balls.” Between sips of her wine-spritzer, Wasner stated that people ask her often what Flock of Dimes means. Her response was sung out in a wonderful melody, saying, “It doesn’t matter at all.” Between her wit and incredible solo show, we have a feeling Flock of Dimes created quite a few new Denver fans after last night. 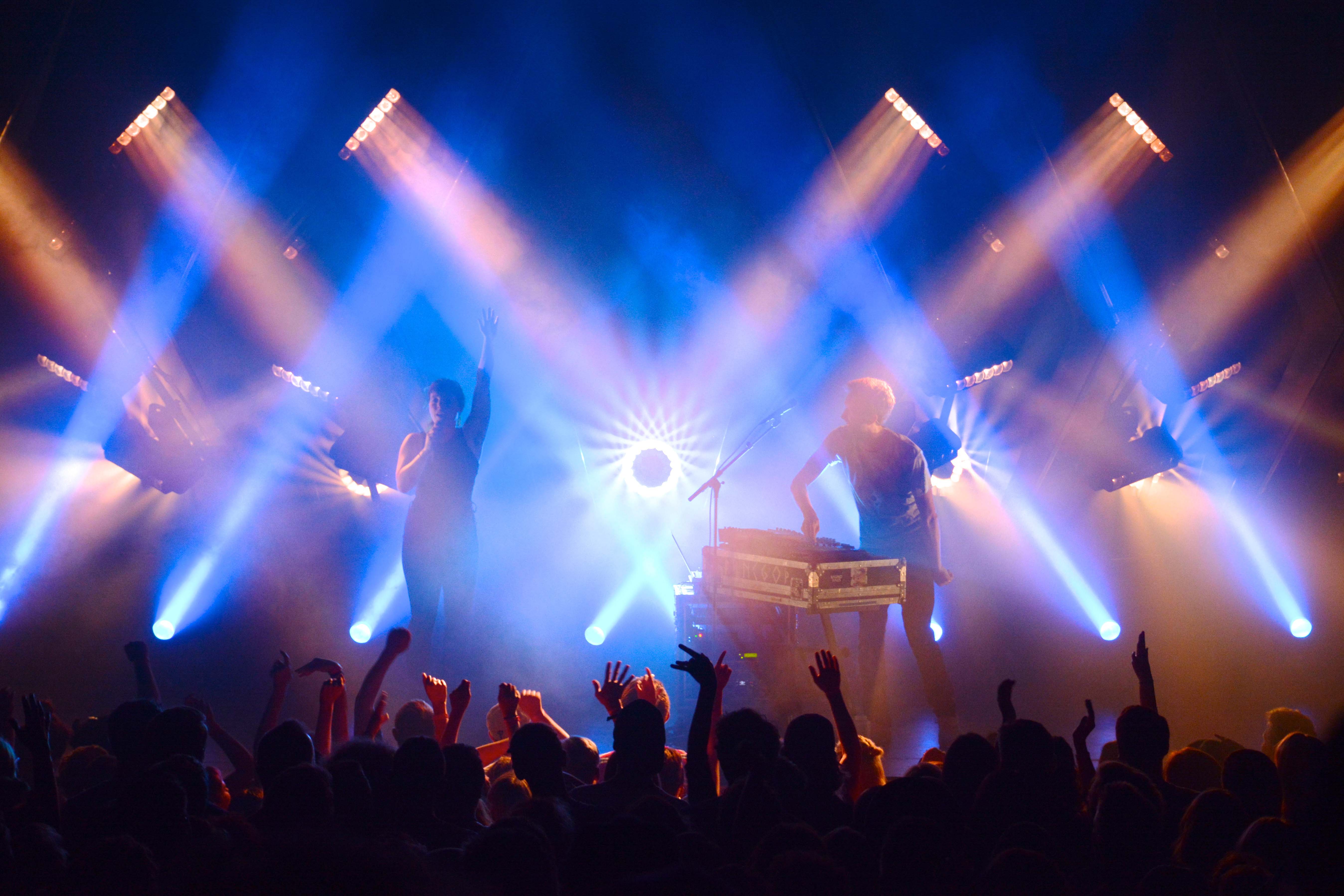 Flock of Dimes departed the stage, spritzer in hand, and the stage crew began moving things around in preparation for Sylvan Esso’s highly anticipated set. “F the NC GOP” was written in white tape at the front of the keyboards, presumably referencing the politics of their home state of North Carolina. Triangular beams extended across the stage, intertwined with columns of lights. It was one of those shows where you walk in, see the lights and can hardly handle the anticipation that follows.

“[We] went and took a break with all the friends at City, O’ City. Kimchi pancakes, y’all. Shit. Yesterday we had a day off and I think I got higher than I’ve ever been. I was so high I was just wrapped in the blanket giggling to myself saying I was the center of the earth. It was really fun.” – Meath

The duo opened with “Sound.” It wasn’t long before the crowd felt heaping waves of bass — that kind of bass that makes your face itch from the vibrations, all matched with colorful lights. The massive LED setup was entrancing and exceptionally coordinated with the intricate minimalistic sounds of Sylvan Esso. But no amount of brightness or vibrations could distract one from Meath’s stage presence. She danced across the stage relentlessly in a lighthearted, exuberant manner. Anyone who knows Sylvan Esso is probably aware of Meath’s common use of large platform boots. What we didn’t know was how hard she gets down in them — almost as if, at this point, they’re an extension of the singer’s own body.

Then, when we didn’t think Sylvan Esso could possibly get any damn cooler, they mixed the end of “Dress” with Beyonce’s “Flawless.” “I woke up like dis,” sang Meath while flipping her hand in the “Single Ladies” fashion. Now, Beyonce wasn’t the only celebrity mention in the show. The duo took a moment to comment on Taylor Swift, who is in Denver at the same time for a sexual assault trial. This is nothing new for the duo — they’ve been very vocal about the music industry in the past.

With only two albums released and most of the familiar material already performed, it soon became clear this incredible show was about to expire. Sylvan Esso had everyone in the audience let out a howl before their performance of “Wolf” and they closed their set with “Radio.” As to be expected with the volume of the heartfelt cheers and applause, Sylvan Esso returned for two more. First, they slowed it down for the intricate and original “Rewind” and then concluded the evening with the first song the duo ever wrote together, “Play it Right.”

Between the two female powerhouses of the night, we really couldn’t tell you who was more charismatic. It was one of those shows where there was never a dull moment — the pauses between songs were filled with some sly or humbling words that had the crowd either rejoicing or laughing. Ladies aside, Sanborn, the only male performer of the night, irresistibly catchy beats were the perfect complement to the evening, throwing down on the control board and keeping everyone dancing. Sylvan Esso was easily one of the best shows of the summer and we can only hope their next stop will be Red Rocks.

Editor’s Note: A previous version of this article stated a misinterpreted quote involving Taylor Swift that has been edited accordingly.