Frank Bonanno can’t imagine the day he’ll stop opening restaurants. If you ask him about it, he may even tear up at the thought. But that’s not because it would mark the end of his personal empire. Instead, it has more to do with the people around him. For Bonanno, opening a restaurant is much more about cultivating a sense of camaraderie rather than a business. French 75, his newest restaurant in his family of 10, is already no different, even though it hasn’t even opened yet. 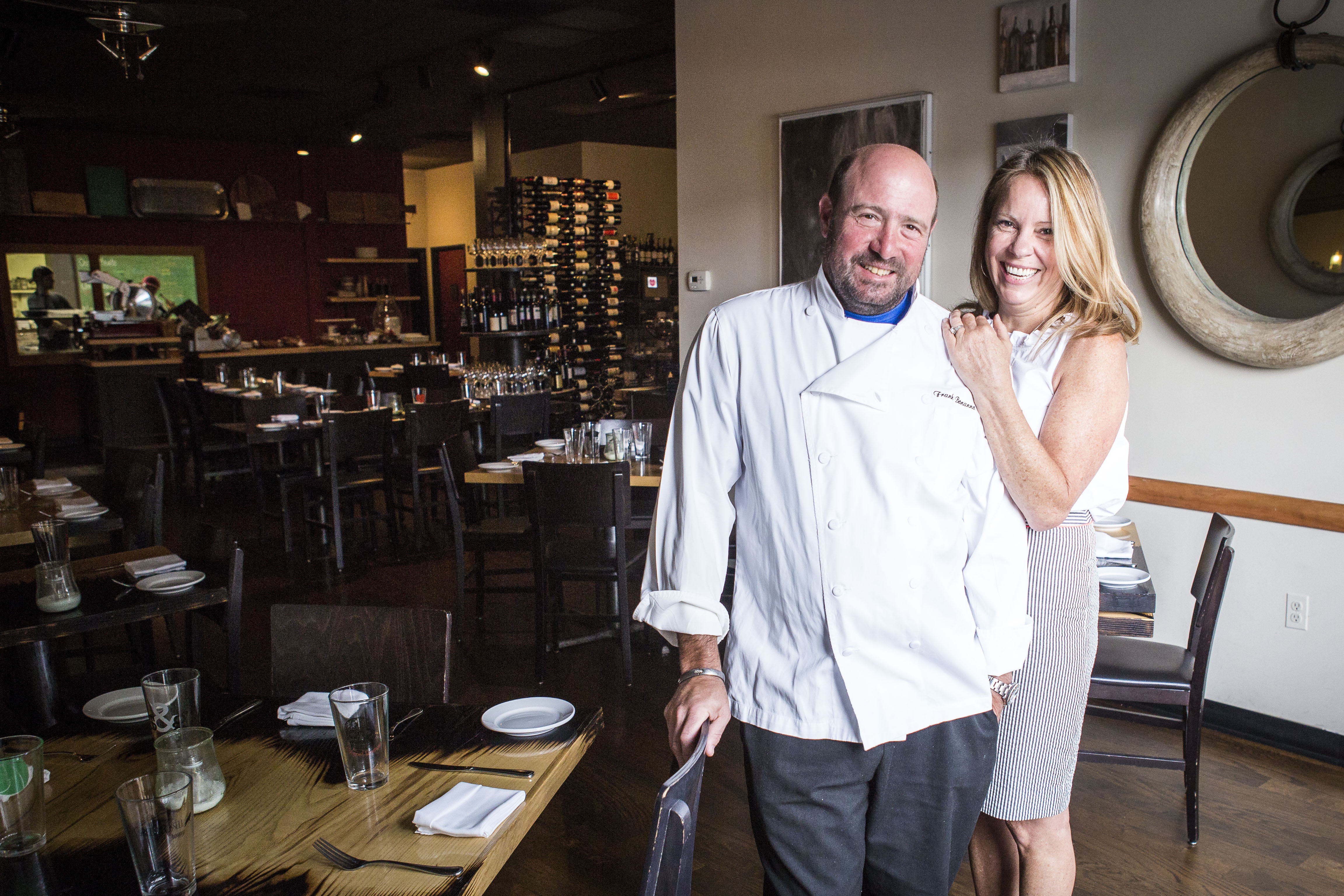 Frank Bonanno and his wife and partner Jacqueline.

“Look at Emily in the kitchen, sweeping. You can’t train that.” Bonanno was referring to an employee voluntarily pitching in. For Bonanno, this sense of teamwork is what sets his restaurants apart. The end game isn’t just producing quality food (although his strong track record with successful restaurants would say otherwise). Rather, what excites Bonanno is teaching. So much so that he hired six cooks that, according to Bonanno, “have never cooked in their life” to help him open French 75.

“That is something that excites me. Alena [a new cook] has never cooked. I was like, ‘Hi, here are 30 lobsters. I need you to kill them and cook them perfectly.’ and I showed her a method she can’t fuck up, quite honestly. If I can teach you, in seven months you will be able to go to any restaurant in this town and get a job,” explained Bonanno.

This promise isn’t an exaggeration either. According to Boannano, 14 chefs that have worked for him now own their own restaurants (including culinary heavyweights like Alex Seidel of Fruition and Mercantile Dining + Provisions). This maybe one of the reasons why Bonanno decided on opening this newest restaurant as a French Bistro. The classic French fare will serve as the perfect training to cultivate new chefs.

Although teaching is a huge part of the Bonanno method, that doesn’t mean the food is made without expertise. Led by chef Jacob Copeland, formerly of Luca, the menu is simple and straightforward French. On it, you’ll find everything from a roasted half chicken, pomme frites and even a burger, to escargot, ratatouille and three offerings of Foie Gras. Other standouts include the steak frites, the table side Caesar and Bonanno’s favorite, the rotisserie leg of Colorado lamb sliced to order. Also those 30 lobsters Bonanno was talking about? Those will go in several dishes from the seafood side of the menu including a lobster bisque and the famous Mizuna Lobster Mac ‘n Cheese.

It’s no surprise this iconic dish is on the menu since Bonanno considers French 75 a continuation of Mizuna— a “little brother” as he puts it. This informs much of what will go on at the downtown restaurant. French 75 aims to be a more affordable, much more relaxed and maybe an even more fun version of the white table cloth staple. All of these aspirations are clearly seen with the happy hour.

Note: Prices are not listed as they have not been finalized.

“This area is crazy when it comes to happy hour,” explained beverage director Adam Hodak. The downtown area Hodak referenced does have a series of high profile happy hours including the much-loved specials at Panzano. Hodak explained he wants to compete with an affordable drink list that includes $22 bottles of wine (the bubbly Brut rosé is worth trying). In addition, there will be variations of their namesake cocktail, the French 75. The original will be made with Leopold’s gin and Champagne. The variants will riff on the acids by swapping the traditional lemon with watermelon and pear to go alongside brandy and vodka and Rosé. The “Green Hour” (what they are calling their happy hour from 3 to 6 p.m.) will also have half price absinthe and flights of liqueurs like Chartreuse. Outside of the Green Hour, you’ll find plenty of specialty cocktails and an expansive wine list of primarily French selections, with support from California brands. If you have a hard time choosing though, go with Hodak’s recommendations. He’s been working with Bonanno for 10 years and is a partner at their most successful cocktail concept, Green Russell. According to Bonanno, he’s one of the most knowledgeable beverage directors in the country.

French 75 is set to open its doors on Monday, July 17. In the meantime, Bonanno will be posted up in the kitchen doing what he loves best — teaching new talent how to do everything from slicing and dicing, to crafting a perfect duck confit (and maybe killing a few dozen lobsters). Hopefully, this magic touch will help French 75 overcome the unexplainable curse that has caused almost every other Denver French restaurant to close over the last few decades (see Z Cusine, Le Central). Because admittedly, French 75 is not trying to reinvent French cooking nor is the menu unlike anything ever seen in Denver. Rather, Bonanno is hoping that the care and time he puts into his food and staff will craft an atmosphere that’ll have you coming back for more.

French 75 is located at 717 17th Street Suite B, Denver. All Photos by Amanda Piela. 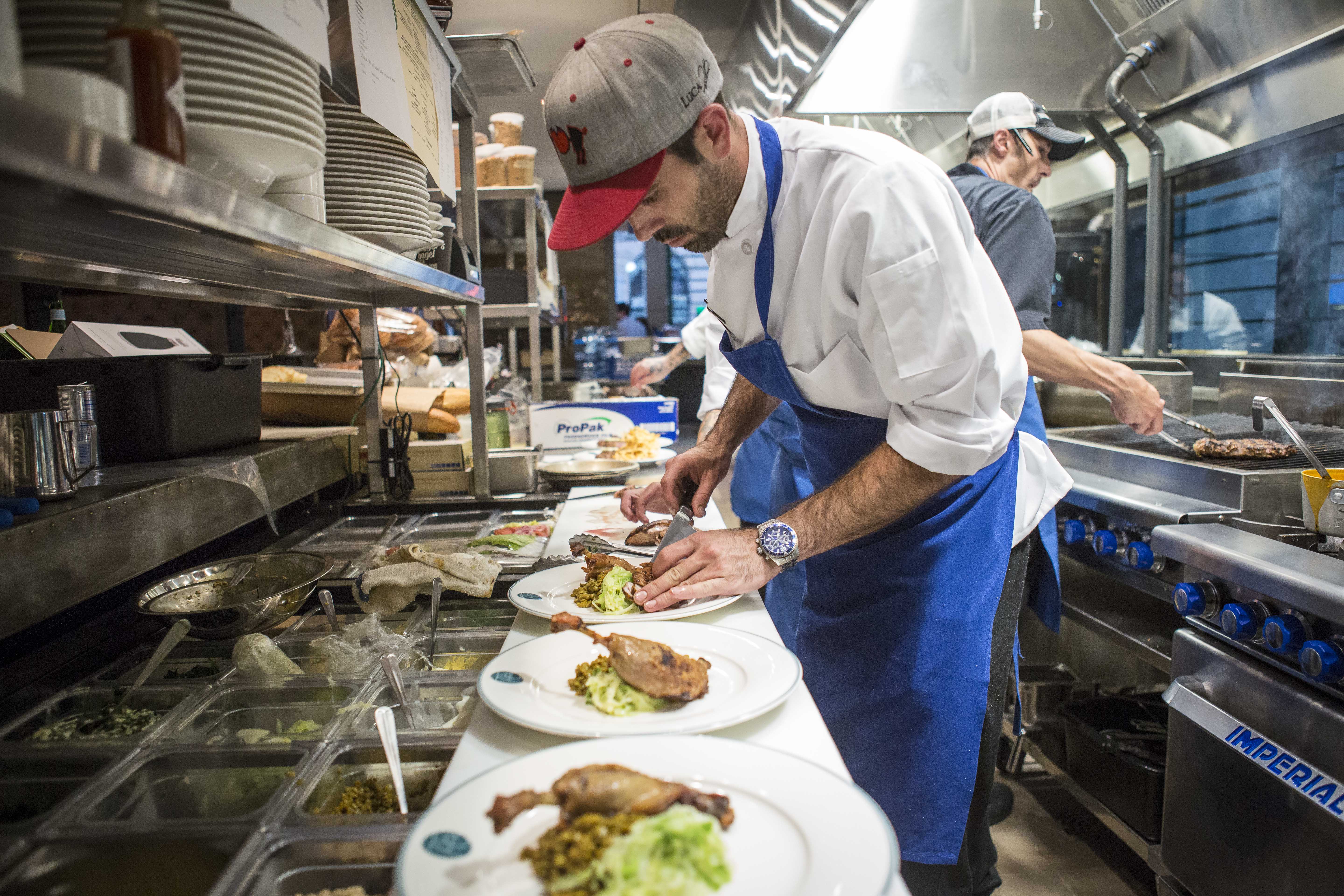