It started off as the perfect day at Red Rocks. It was 70 and sunny and there was no traffic getting into the venue. After having the classic debate between north and south, upper and lower, we settled on a prime spot in the Upper South parking lot. It was calm and casual and the lot was barely half full — even though doors were set to open in 30 minutes. I guess that’s the benefit of seeing a Red Rocks show that’s not sold out. This is something of a rarity, and frankly surprising considering, in my mind, Miike Snow and Phoenix are a match made in pop-rock heaven. 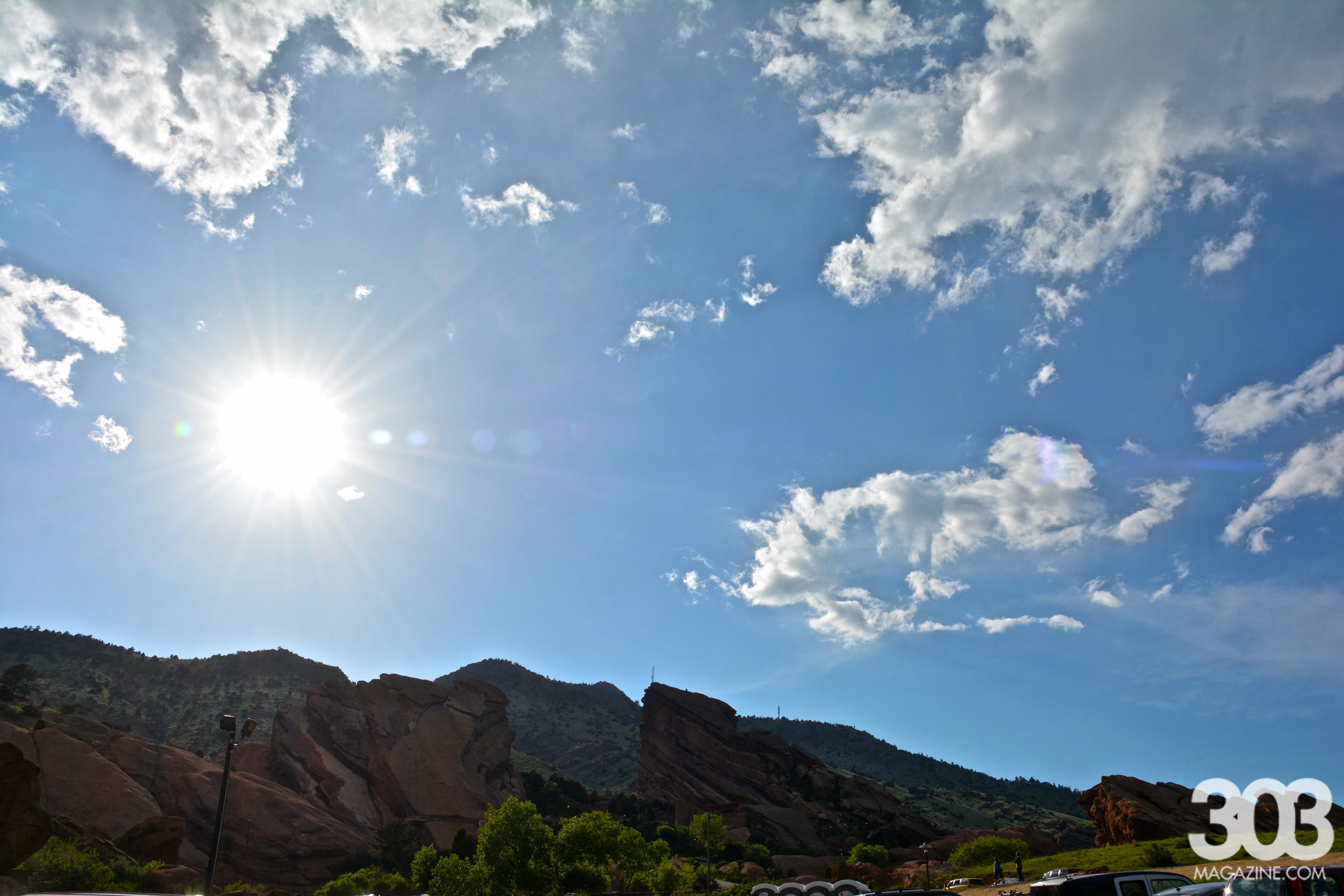 Red Rocks the day of the show. All photos by Will Sheehan.

However, an increasingly common dilemma was likely to blame — a bigger concert was scheduled for the same night (you can see our gallery for Metallica here). Nevertheless, it worked out in our favor as we nabbed a second-row seat. If I were still at the Chance the Rapper show I’d expect everyone to Instagram their luck with a hashtag “blessed.” But Phoenix had drawn a crowd that was above drinking age (since when do 13-year-olds go to so many Red Rocks shows?)

This, however, didn’t apply to the openers. Lemon Twigs, a New York band compromised of two teen brothers with a backing band that looked all under the age of 15, kicked off the night with an unabashed retro set. Polyester suits, tie-dye shirts, bell bottoms and fantastically ’70s style haircuts made Lemon Twigs look like they’d raided the wardrobe of Dazed and Confused. While their attire comes off a tad forced, these “wunderkinds” (as they’ve been called) committed wholeheartedly to their act. With high kicks and hair flips, it set a perfectly raucous tone for what was to come.

For those unfamiliar with Miike Snow, let me get this out of the way. Despite their name looking like it belongs on a neon flyer some dude just shoved in your hand, it’s not one guy and it’s a band and not a DJ. The trio is known for their ability to produce mainstream hits but proved that night they have much more than a pop sensibility. Starting off with “My Trigger,” the band jumped into it with the revamped sound of their latest album iii.  Their most popular new song “Ghengis Kan” came shortly after and fulfilled Wyatt’s promise to get the crowd to sing a really pop-heavy chorus “without making them feel like idiots.” However, it became clear when they played a stripped down intro to “Heart Is Full,” that this wasn’t going to be a made for radio performance. Heavier instrumentals dominated many of their songs, setting the tone that Miike Snow was ready to flex their muscles as rock musicians. At one point during “Black & Blue,” they extended the song long enough for their touring guitarist to smoke an entire cigarette while jamming out.

The set then wrapped with what is likely considered their biggest hit, “Animal.” Right after the song ended, I overheard someone say, “now that’s good pop music.” I couldn’t agree more.

But just as the buzz of the feel good radio tune had worn off, dark clouds rolled in. It started with just a few heavy drops. At first, I mistook it for someone throwing a cup of water a few rows back because I didn’t expect it to rain. That changed quickly as massive sheets fell furiously on the rocks. Many people stayed in their spots, myself included because in Colorado it never rains for very long. That was the first mistake. For about 30 minutes, it continued to pound on the famous amphitheater, leaving no one dry as the wind carried the rain into any refuge for another half an hour. Pushing and shoving pursued and for a moment it got a little worrisome as the drunkest of the crowd began to thrust indiscriminately. My shoes began to flood with water and a sense of claustrophobia kicked in. On my list of when I have been most miserable at Red Rocks, this was at the top. The storm proceeded to get worse, and I considered leaving for a moment. But, in true Colorado fashion, it suddenly ended.

Everyone flooded back in as the stage went black and the slim silhouettes of the band appeared. A red heart on the drum kit glowed in the background, and appropriately mirrored the swelling excitement of the crowd. Then a thunderous drum beat unfurled in the dark as a siren blared. It was clear Phoenix was ready to bring a storm of their own. The lights went up and Phoenix burst on the scene with their newest song “Ti Amo.” The distinct synth heavy song paired with Thomas Mars’ new sci-fi tone represents the best of their newest album (which comes out this week). It’s full of energy with their signature undertones of disco but takes a veer towards the sounds of ’70s electronica (hello again, Giorgio). Off the album, they played three songs with “J-Boy” coming fourth and “Role Model” eighth. During “J-Boy,” the stage revealed itself to be a screen that lit up like a kaleidoscope of colors and patterns. At one point, as the floor flashed pink and blue and looked as if you saw the whole stage through old school 3D glasses.

“We have tried really hard to play here ” – Thomas Mars

In between their new songs, they played a mix of their discography with a heavy majority from Bankrupt! and Wolfgang Amadeus Phoenix. To my dismay, they largely steered clear of It’s Never Been Like That which only slightly broke my heart, but I got over it quickly when they played “If I Ever Feel Better.” The song is from Untitled which came out in 2000. It’s hard to believe the band has been around for 17 years, but after watching them play it’s obvious these guys are professionals. Rarely have I seen bands play as air tight and with that much energy. Towards the end, they slowed down, with a long instrumental of “Love Like A Sunset Parts 1 & 2.”  Mars laid down as a soft pink light rolled on the screen. He looked like it could cradle him to sleep. Afterwards, they tied up the set with “Rome,” which would have been disappointing if it wasn’t clear they’d come back for an encore. After the short “will they, won’t they” ruse, Mars slowly walked on stage for the encore and casually jumped the railing with his long red microphone cord trailing behind. He started by thanking everyone in the crowd, as he walked among them. Throughout the night he mentioned how much this show meant to them, and how it was their first “successful” attempt at playing the venue. Those who stayed were able to watch as Mars slowly sang “Countdown,” inside the crowd before returning to play the much loved “1901” followed by a reprise of “Ti Amo.” During the set, Mars explained this was the last concert before their new album came out, so you best believe they wanted to end on a reminder.

At the end of the show, I was finally dry but completely dehydrated. Despite the insane amount of moisture I just experienced, I jumped and sang so hard that somehow the night ended with me craving water. It was a perfectly ironic end to one of the best and worst times I’ve ever had at Red Rocks.