Buskerfest, Cherry Blossom Festival and 20 Other Things to do in Denver This Week

From Buskerfest, to movie nights, to plenty of comedy, there’s a lot of fun to be had in Denver this week. Bend into a downward dog surrounded by adorable felines, check out RiverFest on the Platte River, or explore unique art exhibits like Capturing the Beauty of the Open Land and HUMAN | NATURE. Whatever you choose to do, make sure to enjoy this warm and free time of year and see what Denver has to offer. 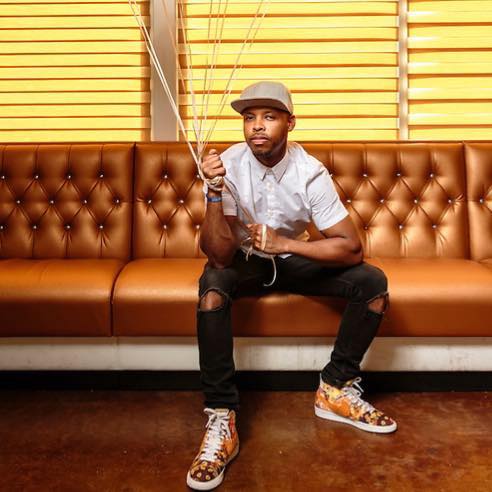 The Lowdown: Featured on Comedy Central’s Adam Devine’s House Party and winning first place at the Seattle International Comedy Competition, Dino Archie is making his transition from acting to comedy. His comedy style is conversational, like your friend who just tells stories that make you roll on the floor laughing. Check out his comedy album, Choosy Lover and sit down with him to start off your week with some laughs. 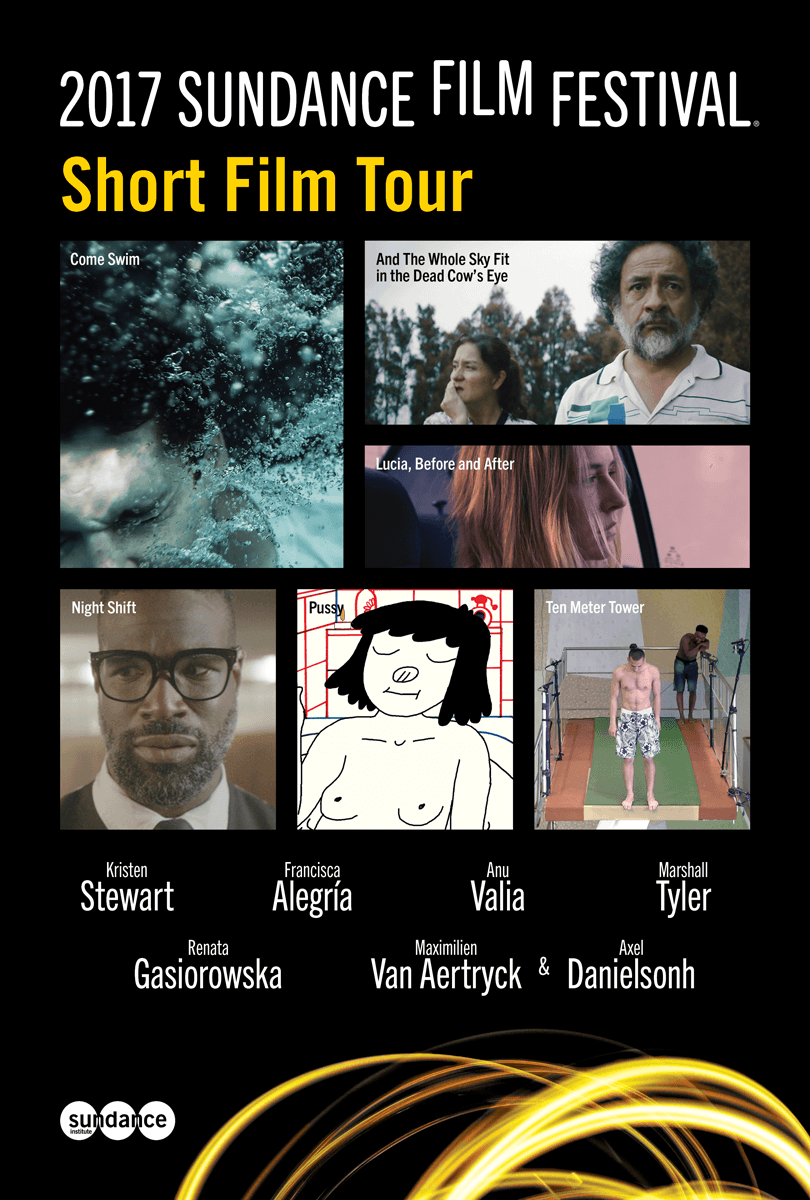 The Lowdown: If you’ve ever wanted to be part of Sundance, now is your chance. This is a 95 minute series of seven short films featuring 5 Films About Technology, And The Whole Sky Fit In The Dead Cow’s Eye, Come Swim, Lucia, Before and After, Night Shift, Pussy and Ten Meter Tower. So get ready for a day of movies of multiple genres and a film festival experience.

The Lowdown: Fellow Magazine and the MCA Shop are joining forces to talk with local makers about how they made their crafts and creativity a career and turned their products into a business. They will also discuss the projects they are working on now. If you are working on your own projects, you can share them after the talk. This week, it’s The Made Shop, which is a local design company that creates spaces, objects, films and graphic designs. Come up early to enjoy happy hour, which ends at 7 p.m., then sit back to listen to how others have turned their craft into a trade.

Film on the Rocks: Rogue One

Photo courtesy of Red Rocks Park and Amphitheatre on Facebook.

The Lowdown: Were you sad that May’s Film on the Rock’s showing of Rogue One was cancelled? Good news: you get another chance. This prequel to the Star Wars saga takes a look into Galen’s childhood and shows how she became the Empire’s lead engineer for the Death Star. Catch this iconic Monday movie night this week whether you’re a Star Wars fanatic or just looking for something fun to do at Red Rocks.

Photo courtesy of the Denver Animal Shelter on Facebook.

The Lowdown: What’s better than yoga? Yoga with cats. The Denver Animal Shelter is putting the two together with a Wednesday night yoga session alongside furry friends. During class, the cats are free to wander as they please and if you happen to fall in love with any of them, they’re all adoptable. Bring your own mat and get your flow and purr on. 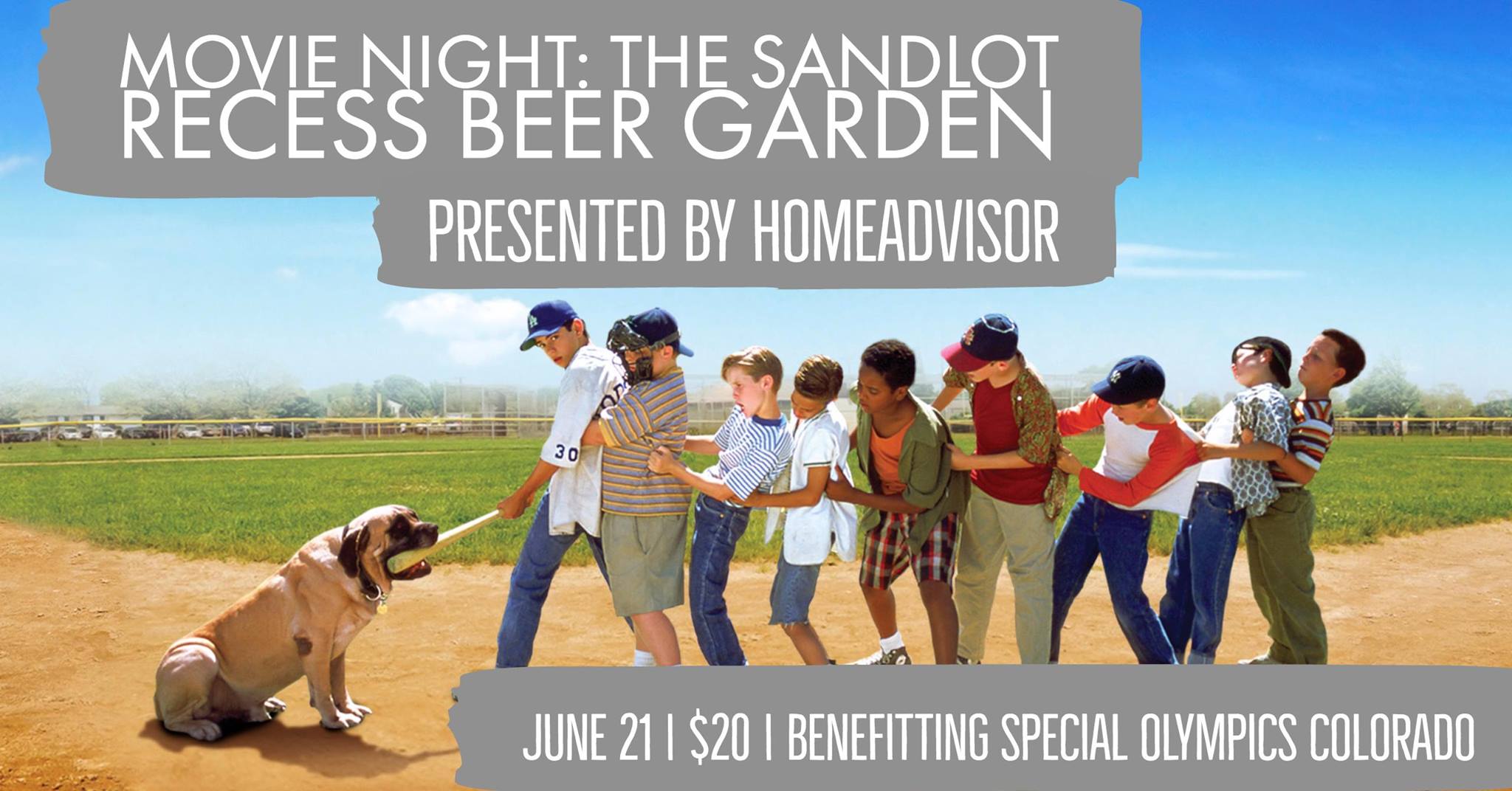 The Lowdown: Watch this summer baseball classic with the Special Olympics Colorado’s Young Professionals Board as they share their inspiring stories. Proceeds go to the Special Olympic’s Colorado softball program and with your ticket you get a free drink and raffle ticket. Settle in behind the big screen and “remember kid, there’s heroes and there’s legends: Heroes get remembered, but legends never die.” 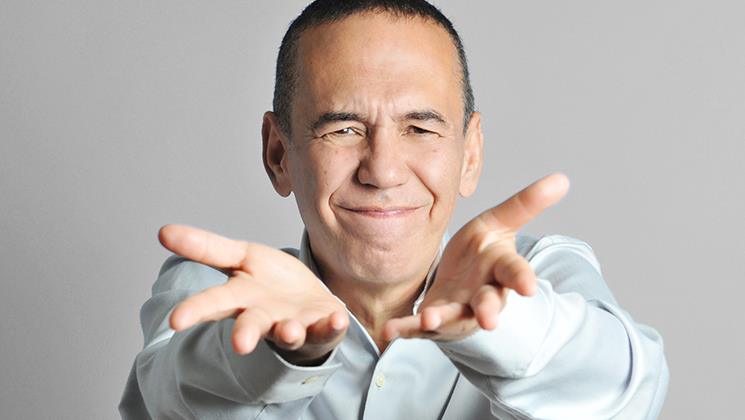 The Lowdown: You may have seen Gottfried on shows like Law and Order SVU or SNL, heard his voice on Disney’s Aladdin as the parrot Iago, or read his book Rubber Balls and Liquor. Starting comedy at the age of 15, Gottfried knows what he’s doing. Famous for never holding back on jokes, no matter how socially inappropriate, Gottfried will get you laughing at every turn his stories take. 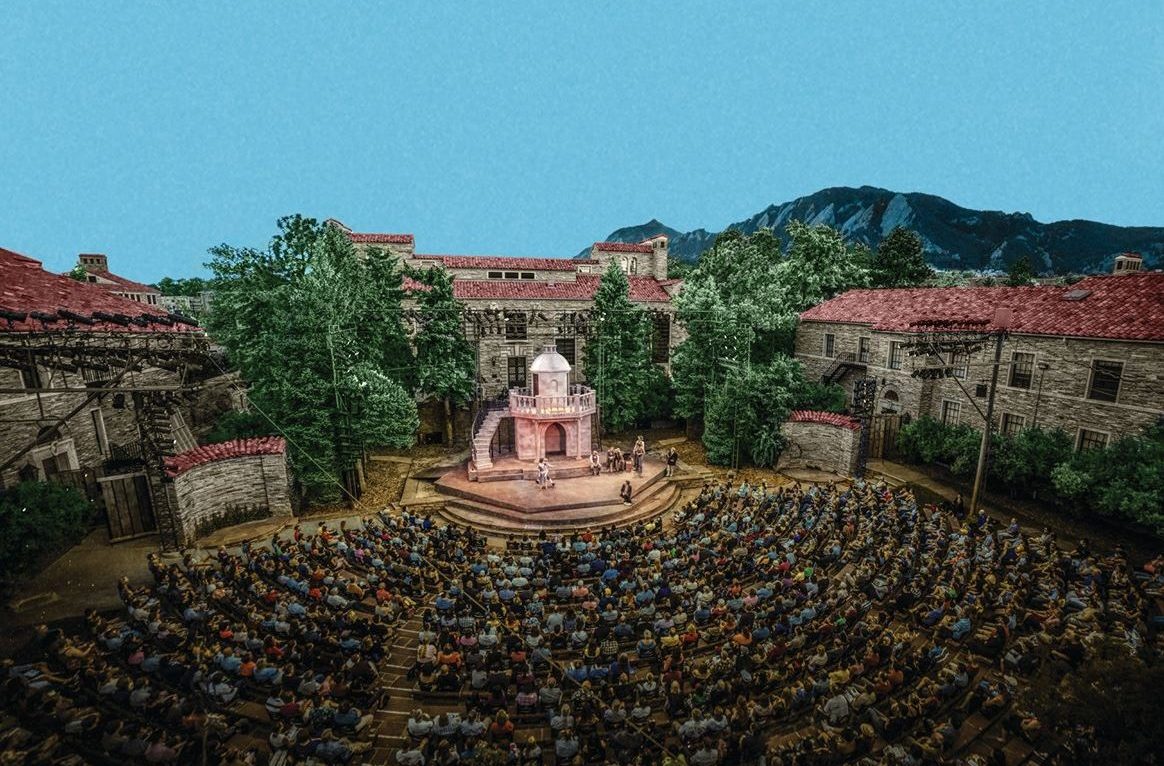 The Lowdown: Head to a mountain-surrounded outdoor theater for the perfect Shakespeare setting. Watch The Taming of the Shrew, a classic Shakespeare play with a twist — it’s set in 1940s New York City, where the protagonist is a pilot who has just returned from World War II. Throw in Little Italy, witty banter, dancing and a spark of romance and you have an eccentric and vibrant Saturday night. 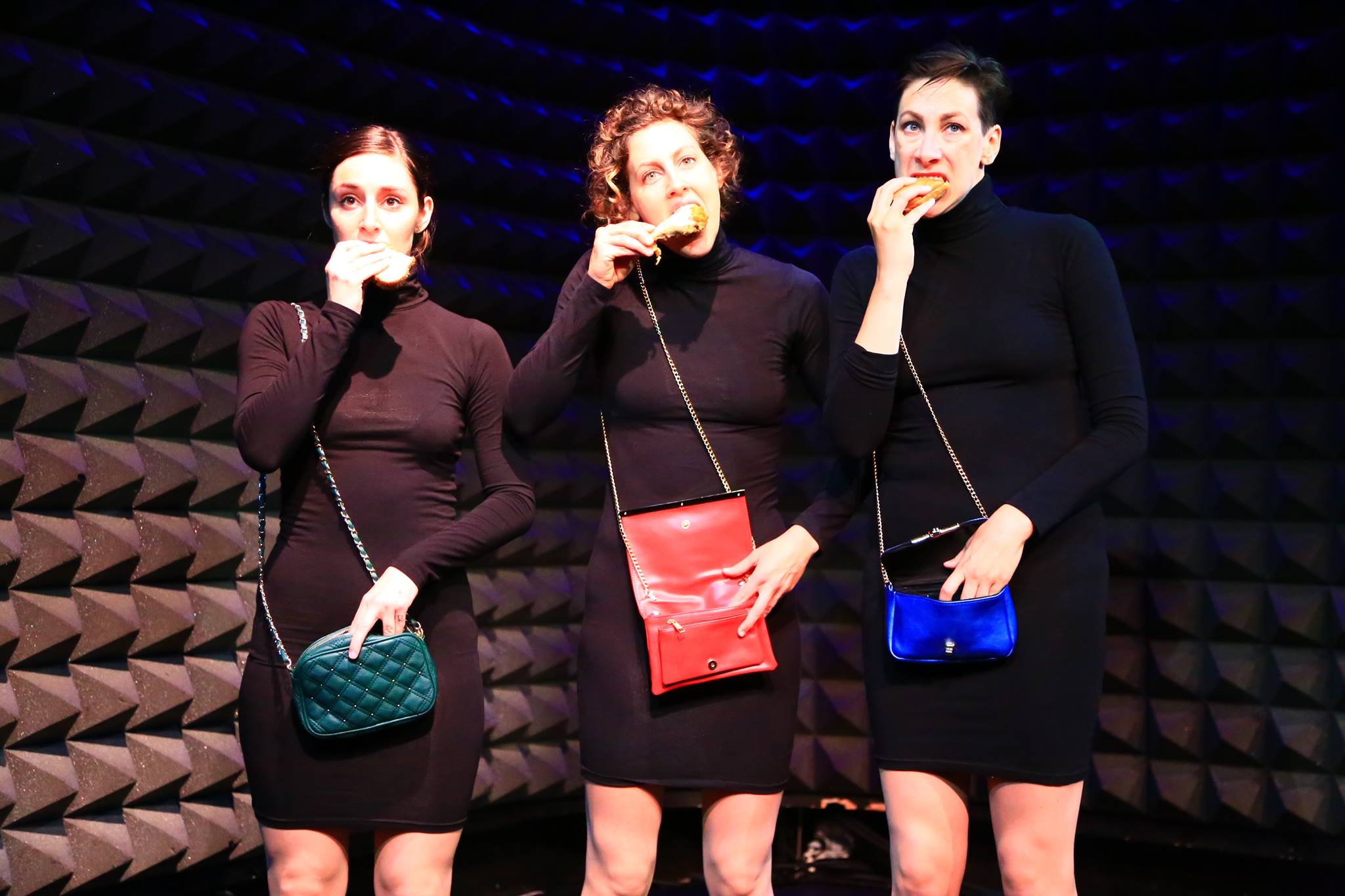 Photo courtesy of LMnO3 at Joes Pub – B.A.N.G.S.: Made in America on Facebook.

The Lowdown: This dancing trio, LMnO3, is composed of Deborah Lohse, Cori Marquis and Donnell Oakley who have been creating comical choreography since 2014. The noun-preceding adjectives in French, beauty, age, number, goodness and size, are challenged in this eclectic performance. With a variety of colorful costumes — and a lack of costume — these three celebrate females, friendship and their own attributes of these adjectives. 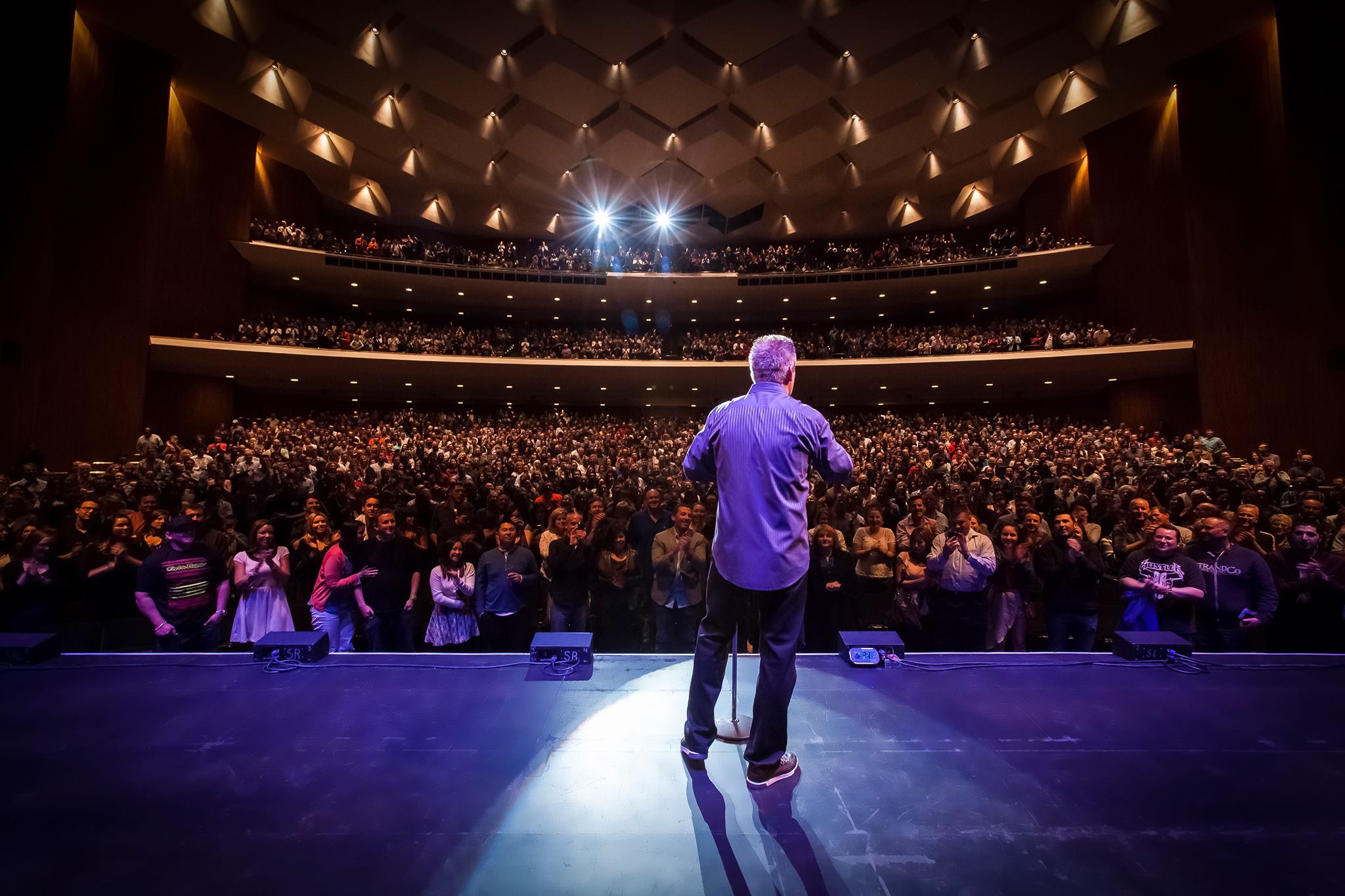 The Lowdown: Acclaimed comedian Brian Regan is on tour and has earned his spot on Netflix. He’s chosen Denver to tape his shows to be included in a two-part Netflix comedy feature, so come ready to laugh and maybe even be in the show. Regan is no stranger to live-filmed comedy stand-ups, making his name as the first to do so on Comedy Central with his special, Brian Regan: Live From Radio City Music Hall. Since then, he has performed in several TV comedy specials. Come be part of this show you’ll be able to re-watch over and over again. 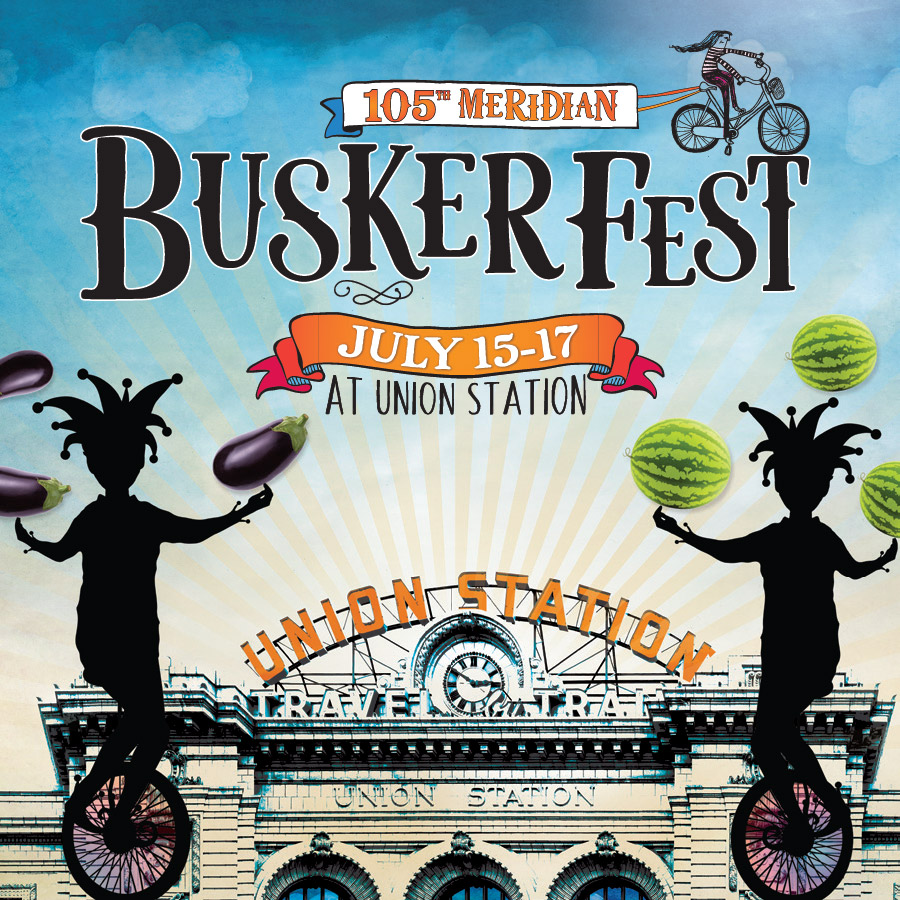 The Lowdown: The Union Station plaza is lighting up this weekend with live street art and performers. Cultivated by preservationist Dana Crawford, these artists will display their skills in busking and street theater. With fire performers, musicians, face painters, hula-hoopers and jugglers, there is no shortage of entertainment. There will also be vendors in the area, some donating proceeds to Arts Street, which encourages at-risk youth to express themselves through art. 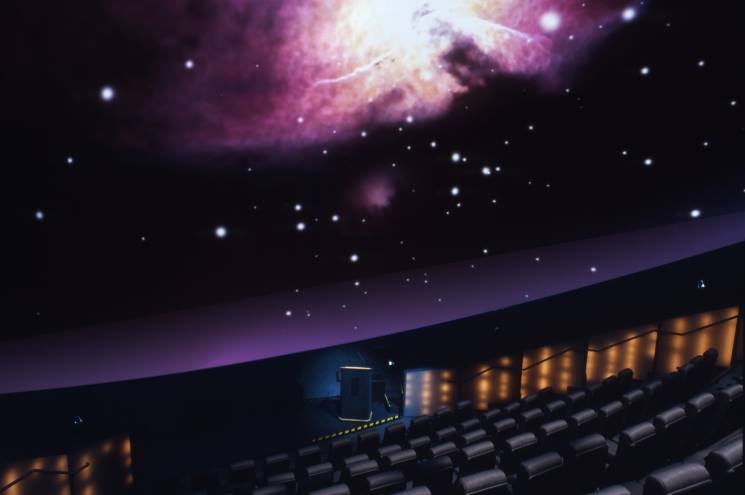 The Lowdown: Take a trip through the galaxy this Friday night, drink in hand. A cash bar opens 30 minutes before the show, so grab yours and head to the planetarium where a museum astrologist will guide you through the Milky Way. Gaze at the stars as they talk planets and constellations and answer the questions you have when you look up at the night sky. 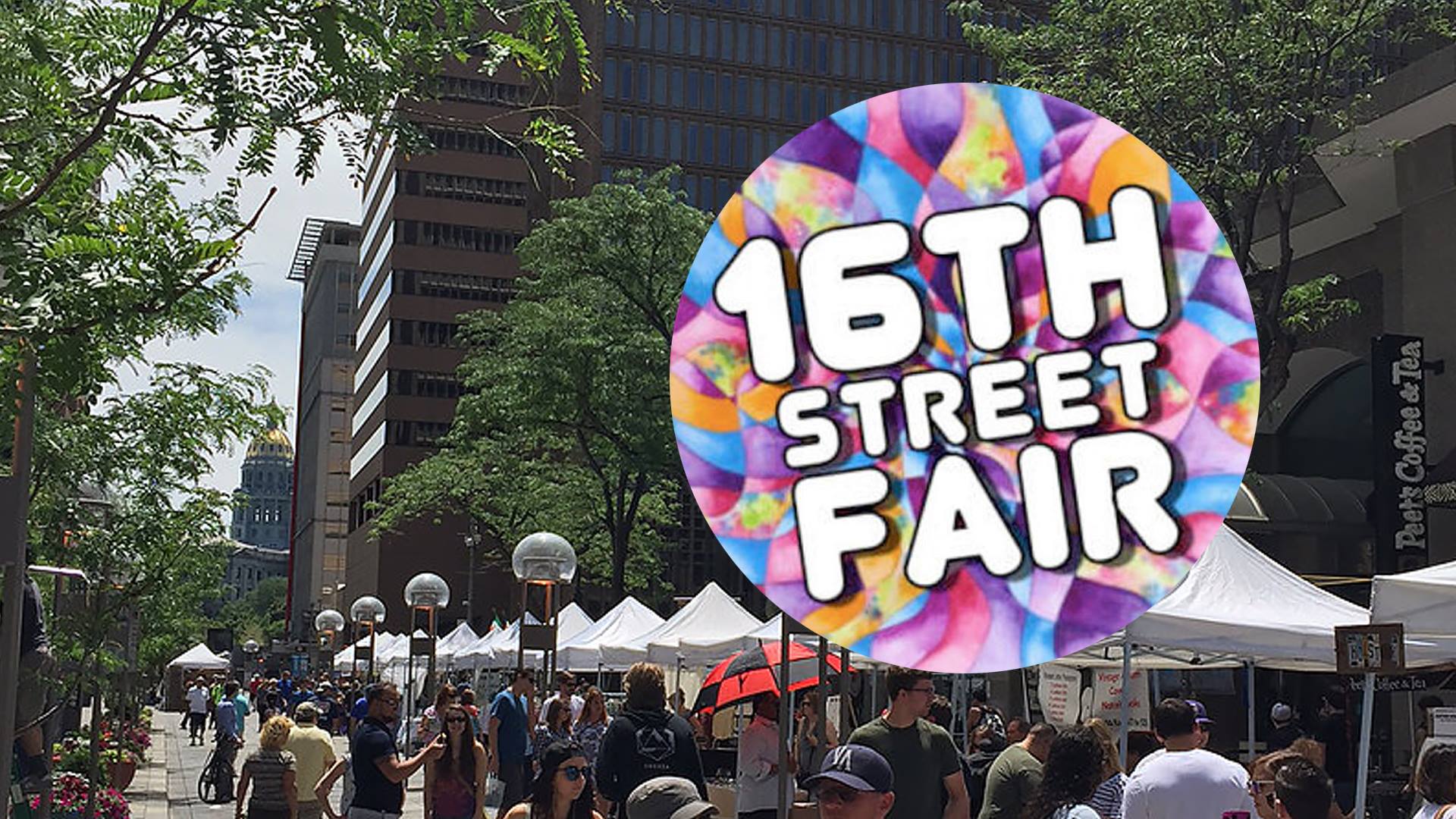 The Lowdown: This yearly street fair celebrates local crafters, artists and designers as they show their works along this pedestrian street. Stroll down the heart of downtown and check out a variety of original, handmade goods in the tents that line the streets. 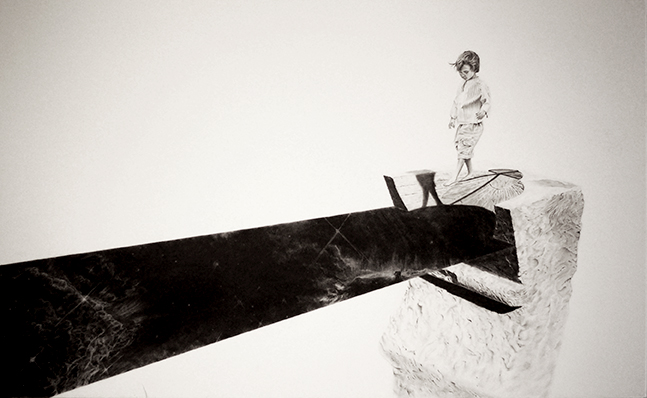 The Lowdown: Nature is quite famous for inspiring art, but what happens when artists stray from the traditional representations of nature? The seven artists featured in this exhibit strive to do just that and will be present at this opening reception to fill in any gaps. The artists are Jessica Drenk, Carol Browning, Don Quade, Norman Epp, Karin Schminke and Lee Heekin. They will explore everything from growth, to environmental destruction, to the symbiotic relationship between man and nature. Composing of sculpture, paintings and several other art forms, this exhibit is sure to inspire.

Capturing the Beauty of Open Land

Photo courtesy of Capturing the Beauty of Open Land on Facebook.

The Lowdown: At this fourth annual summer event, the Douglas Land Conservancy is bringing in 24 Colorado-based plein air artists to capture the beauty of southern Douglas County over the course of a week. The works produced will be on display and available for purchase this weekend at the White Pavilion. Peruse through hundreds of works that highlight the beauty of open land in Colorado. Funds raised from this gallery benefit the Douglas Land Conservancy, a nonprofit land trust.

The Lowdown: Did you love the Denver Spring Flea market? Come back for the summer edition. With over 200 Colorado vendors, there will be plenty to catch your eye. Look through local craftwork and retail items, get a bite to eat at one of the food trucks and cool off with craft beers and specialty cocktails. There will be vendors returning as well as several new vendors to the market including Parcel and Paper Home, Vortic Watch Co., Corbeaux Clothing, Range Leather and Stich and Stutter.

The Lowdown: From quaint towns with dirt roads to mountain climbs around Horsetooth Reservoir, tackle all of them from your bike on this two-day ride. There are several ways you can go depending on what you’re favorite terrain and areas are, all with rest stops every 10 to 12 miles of your ride as well as lunch spots. Bring your friends or make new ones on this epic ride. This event is also a fundraiser, so raise money or pay for your trip and help fund multiple sclerosis research. 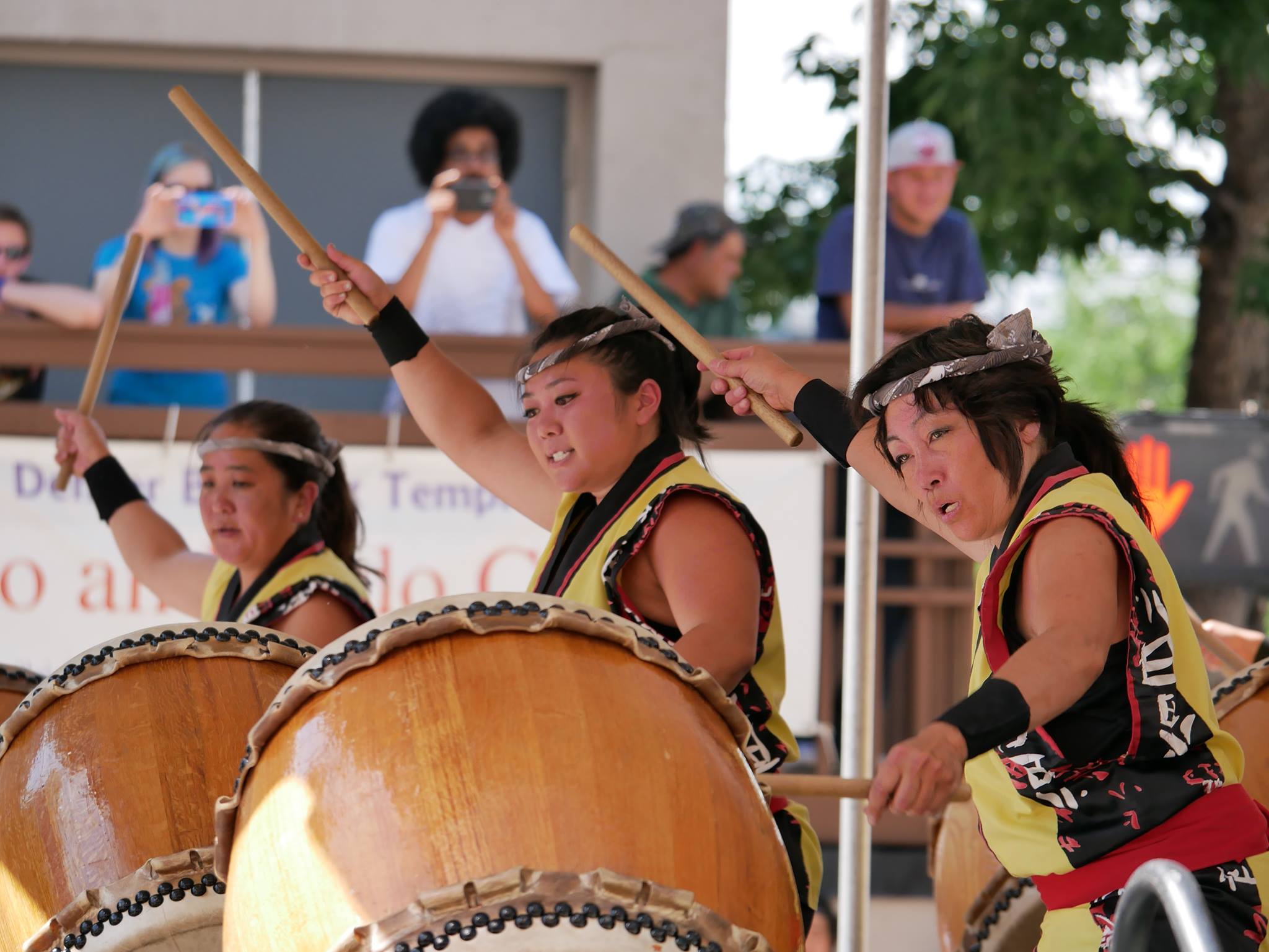 The Lowdown: Head down to Sakura Square and celebrate all things Japanese. Look through exhibits of traditional Japanese flower arrangement, Bonsai and calligraphy. Tap into your spiritual side with lectures on Buddhism. In the way of art, there will be live art demonstrations as well as traditional works to view. Make your way to the stage to see music and dance performances, including taiko drumming and ukulele performances. Of course, there will be plenty of sushi, teriyaki and somen to go around.

The Lowdown: Nothing says summer like a festival, much less a festival on the river. This urban RiverFest will feature stand up paddle board demos and other river activities, as well as food, beer and water sport vendors. There will also be live music by Sound Off Colorado, Oakhurst, Something Underground, Residual Stank Band and more.

Photo courtesy of the Clocktower Cabaret.

The Lowdown: At this show performed by Bella Diva Dance, watch the samba, bright colors and feathers that make up a carnival in Brazil. With Caipirinha cocktails, a stand-up performance by Naughty Pierre, trivia games and samba lessons, you’re sure to have a great time and leave the night feeling lively.

Show and Tell Mixtape: “Hope I Don’t Die Before I Get Old!”

The Lowdown: Ever wonder what’s unique about your generation and what everyone experiences, in one form or another? At this intergenerational show and tell, get the chance to share the songs or objects you think define your generation and hear from others of all ages. It’ll be a night of mixing oldies but goodies, the youth culture of today and everything in-between. 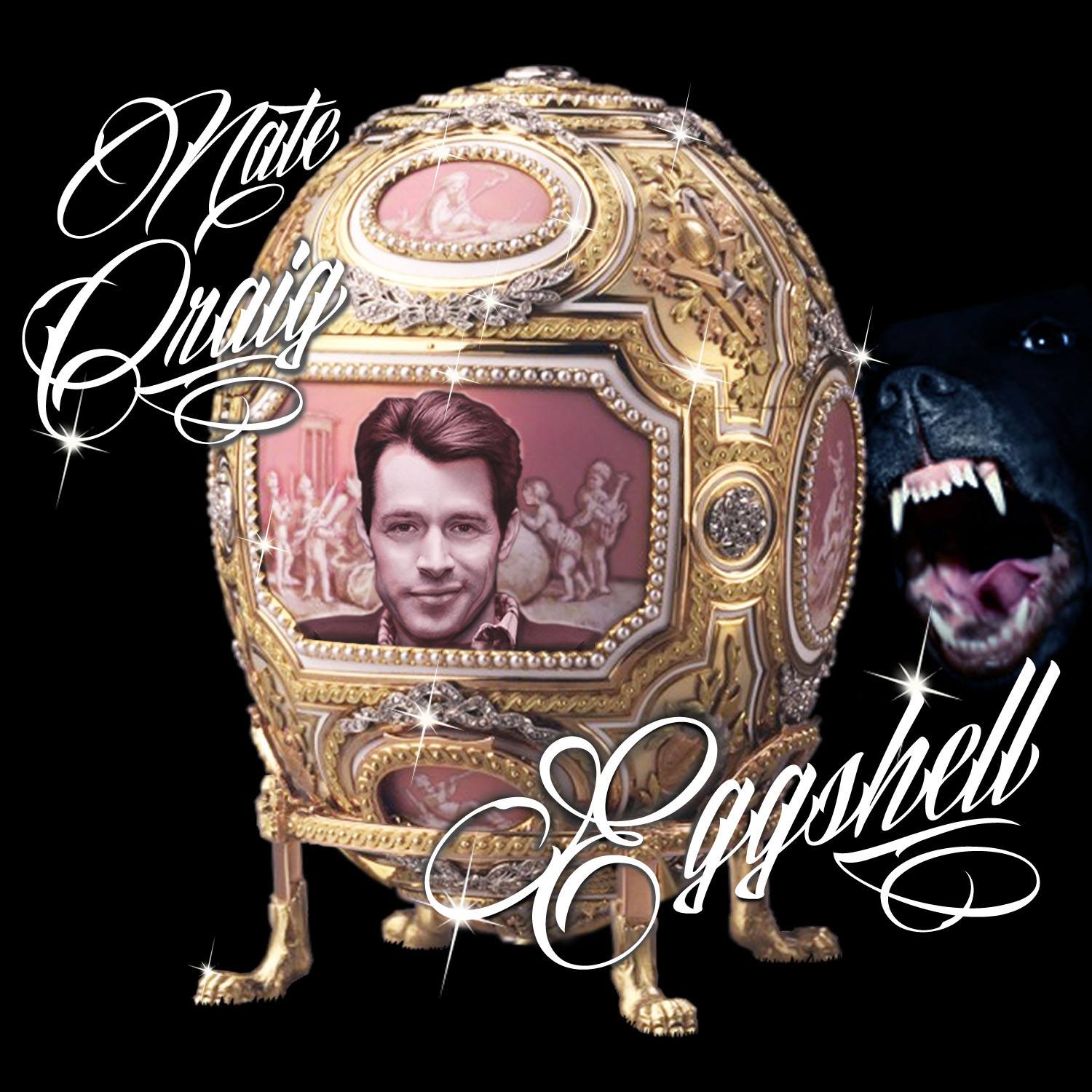 The Lowdown: Featured on MTV’s Acting Out and AXS Gotham Comedy Live as well as writing for Comedy Central’s Tosh.0 and Mash-up, Nate Craig knows his way around comedy. Check out his current material on MTV’s Ridiculousness or his album, “Nate Craig Eggshell.” Get ready for a night of witty tell-alls and stories as Craig puts plenty of laughter into your Sunday night.