A drift into Spanish  seas, a night full of subtle rhythms and warble-like singing, it was evident that singer-songwriter Devendra Banhart had taken a winter night inside the Boulder Theater and turned it into his own miniature paradise. He and his band performed on February 3, 2017, and ended the night too early at just 11 p.m. — the cold air was bitter to face after his coastal tunes. 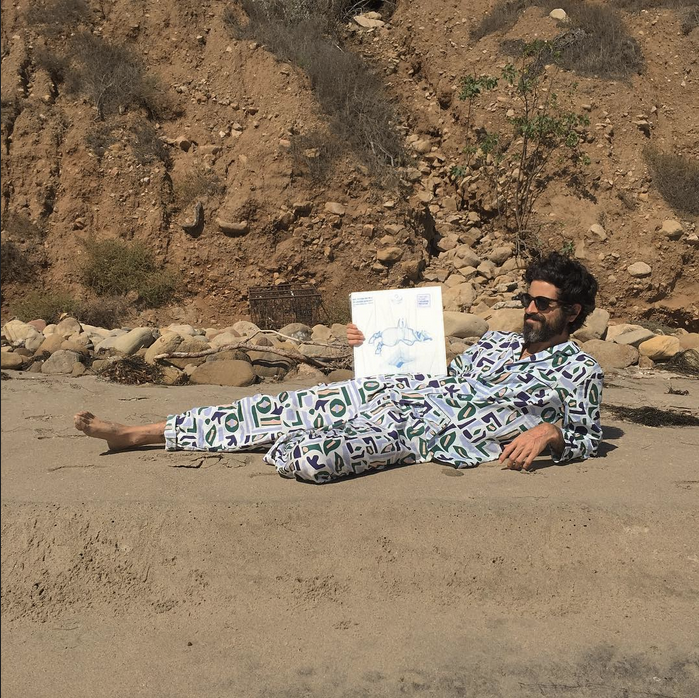 Banhart released an album in 2016 titled Ape in Pink Marble, and the opener of the night was from this work, “Saturday Night.” It’s hard to pinpoint what genre of music his work lies — folk, psychedelic folk and Latin are just a few words to describe it. And when I stated the night had warble-like singing, I should probably expand. Banhart has a signature singing style and often oscillates his vocal chords to dangle between syllables. It’s quite beautiful with his fragile voice and romantic lyrics, “As we all embrace what we’ve become / And love always is merging to one / Please don’t love me because, don’t love me because / You’re through hating you.”

Even though his lyrics were poetic, he came off quite quirky and silly, but in a manner that is one to admire instead of make fun of. He wore a bright orange sweater and the set-up reminded me of a Wes Andersen movie, filled with quirks and mild nostalgia. Banhart would dance with his hands, getting into the music both sonically and visually. He would also nod his head to the beat of the music, looking like a puppet being pulled on a theatrical set. And with each word of his music, he was infectious and gave off such a crisp inflection; he would punctuate his lyrics, just like when old choir teachers would have you practice smacking your t’s, and he would hiss out the s’s, dragging the music into a more ethereal sphere of sound.

Banhart introduced the members of his band, “I don’t know if they are good musicians but I love them,” he joked, as every member easily flexed their talents throughout the night. He had fun joking around with the crowd – topics such as aliens and the pyramids were tossed around, as well as his long distance yet intimate relationship with Boulder. He went on to play songs such as “Good Time Charlie,” “Theme for a Taiwanese Women in Lime Green” and “Jon Lends a Hand.” He and the band did not take themselves seriously at all; I felt like they would be just as comfortable busking and singing in the streets of Mexico as they were playing Boulder Theater. His light-weighted music was able to layer in depth with vocal chords and guitar chimes playing sinously against one another. The entire production was like a barefoot twirl inside a sunny forest.
Banhart also took a moment by himself on stage to call forth requests. He dipped into Spanish for some of the songs and it was an intimate session with the crowd. One of the requests was “At the Hop,” a song I enjoyed mainly because of the lyrics, “Cook me in your breakfast / And put me on your plate / ‘Cause you know I taste great / Yeah, you know I taste great.” The light effects mirrored his voice, floating in and around the crowd quite effortlessly, like a boat just bobbin’ up and down on easy waters. Towards the end of the night, the drummer stood up and began a spoken-word poem, “Our story begins on a Sunday afternoon,” he proclaimed, delving into a love story which Banhart and he acted out.
Finishing out with “Fancy Man” (a hilarious look at traveling and love) and “Celebration,” I was left satisfied but yearned to stay on the dance floor for just a moment more. Luckily, they came back out to play a few more songs together. “Tough times my friends,” Banhart stated, “And we’re all in it together, and something that’s been helping me out is the Grateful Dead.” And he went into a cover of the Dead and sang his own “Fig in Leather.” He finally took off that bright orange sweater, said one last good night and humbly walked off the stage. Here’s to hoping the warm fuzzies and Spanish breeze of his songs outlive the chilliness of this strange winter.