From the outside, Corvus Coffee’s new shop in the Denver Tech Center (DTC) seems like any other new business in the area. Located at the new Belleview Station, the apartment/retail complex would be familiar to anyone who’s driven around Denver lately. Built of glass and steel and painted a reproducible greyscale, Belleview Station is marketed as a “master-planned” development. But its sterile exterior feels more like it was mass produced, squeezed out like freshly pressed playdough taken from its mold to be plopped and plotted somewhere south of Denver. But once you walk in the door, it’s immediately clear there’s something much less reproducible about Corvus’ Tech Center locale. 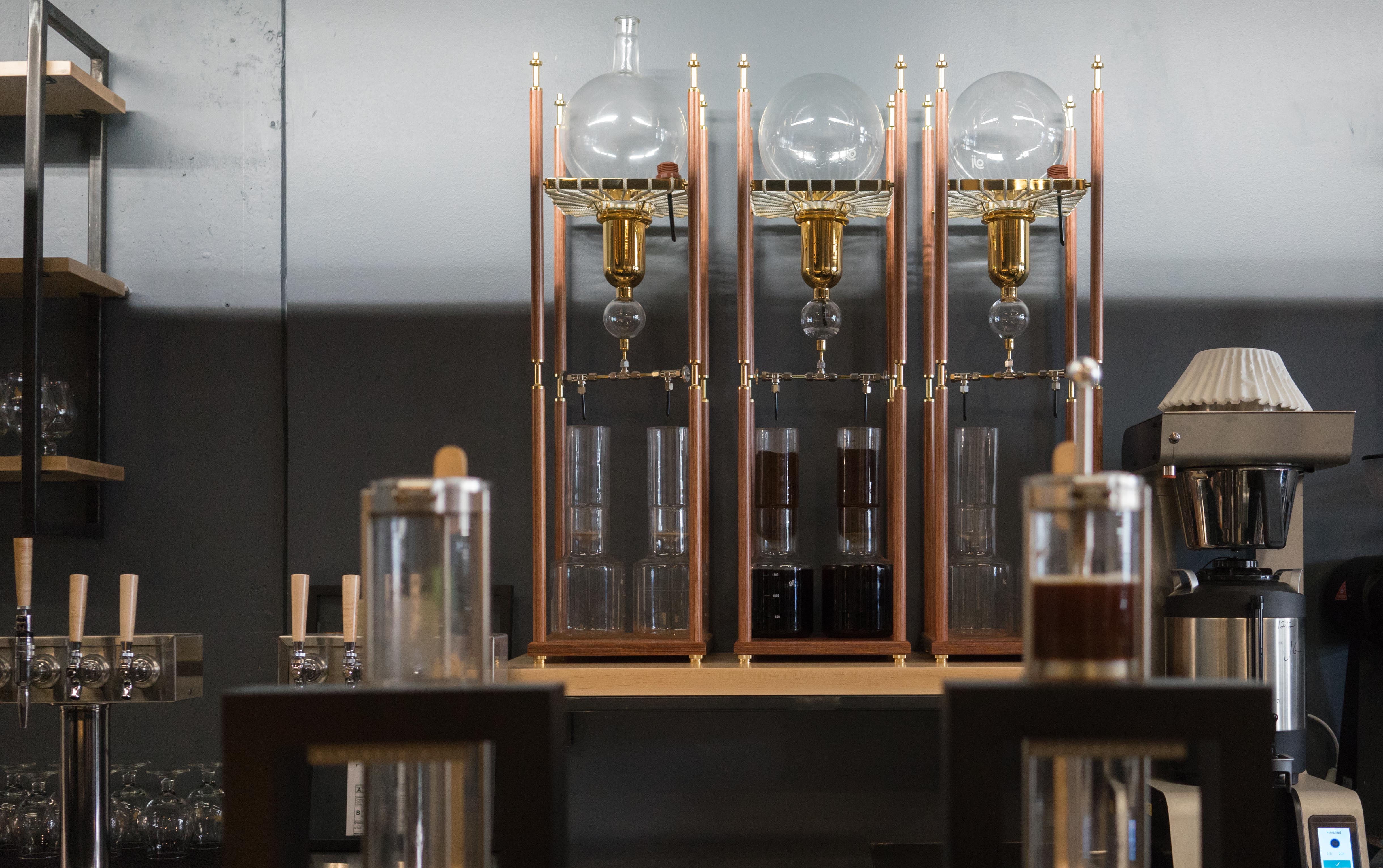 “I don’t want to copy and paste,” said Phillip Goodlaxson, owner of Corvus Coffee, on why he changed the concept for DTC. “Not because that’s not worth doing, and not [that] it results in a bad shop, but it just doesn’t challenge us to grow.”

Goodlaxson’s philosophy is centered around this concept of change, growth and above all, craft. Because not only do they hand pick all their coffees from far-flung regions, and spend innumerable hours getting to know individual coffee farmers, often traveling to said remote regions, they work tirelessly to honor that scrupulously grown coffee with their own expressions. DTC is their latest effort to produce something original or as Goodlaxson puts it “to make something.”

At DTC, you’ll find your typical coffee shop offerings with a full espresso menu including all the cortados and cappuccinos your heart desires, as well as a long list of those exotic, responsibly raised and fairly traded coffees prepared in more ways than one. One of those preparations includes a Japanese method using a Kyoto Tower, a tall glass contraption that acts as the centerpiece to the new shop’s identity. The process, which will only be done at the DTC location, takes over six hours to produce one batch of coffee since it uses singular drops of water to slowly extract the magic locked inside the beans. That meticulously produced coffee is pushed a step further with a drink list that reads less like a latte and more like a cocktail. 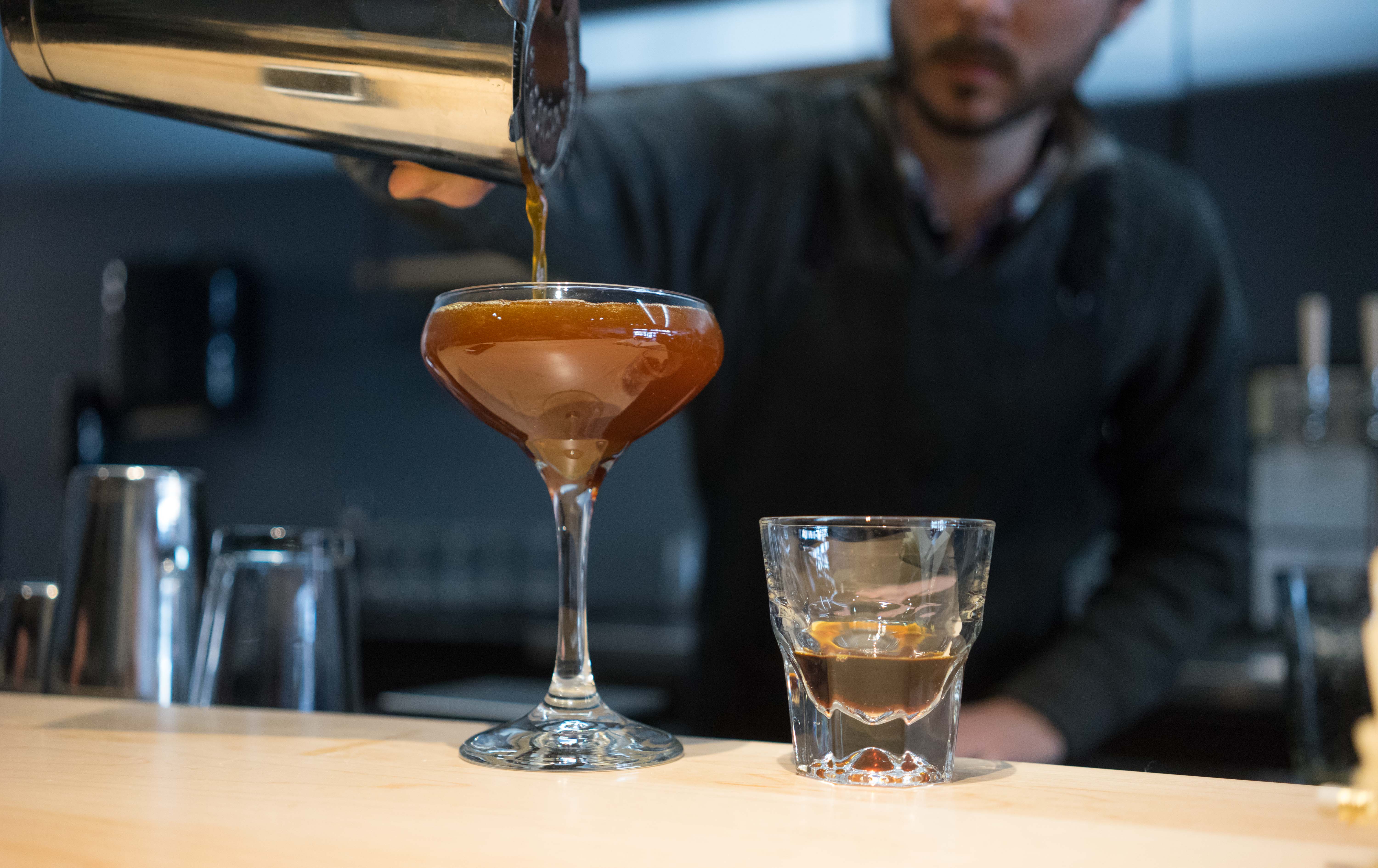 The Heart of Darkness Kyoto poured by Corvus’ Doug Stone.

Take the Heart of Darkness ($4.80) which is made with a natural Ethiopian Kyoto coffee called Gigesa served with pineapple, ginger and rose then shaken and poured into a coupe glass. The result looks as if it was made with booze, and I’m sure many people will mistake it as such. But Corvus does not have a liquor license. However, that’s not an accident nor a hiccup in their opening. Right now, it’s intentional, and as Goodlaxson explained, their main focus is producing drinks not made for the purpose of delivering booze someday, but to treat their coffee as the commodity it is.

“These coffees are special because they have different characteristics drawn from where and how they’re processed and produced,” said Goodlaxson. ” We’re making drinks that reinforce that idea.”

That’s why when you take a sip of The Heart of Darkness you taste not only the coffee but you pick up on notes of the roast’s fruitiness. Those flavors then balance the acidic notes of the coffee for a robust but refreshing drink. 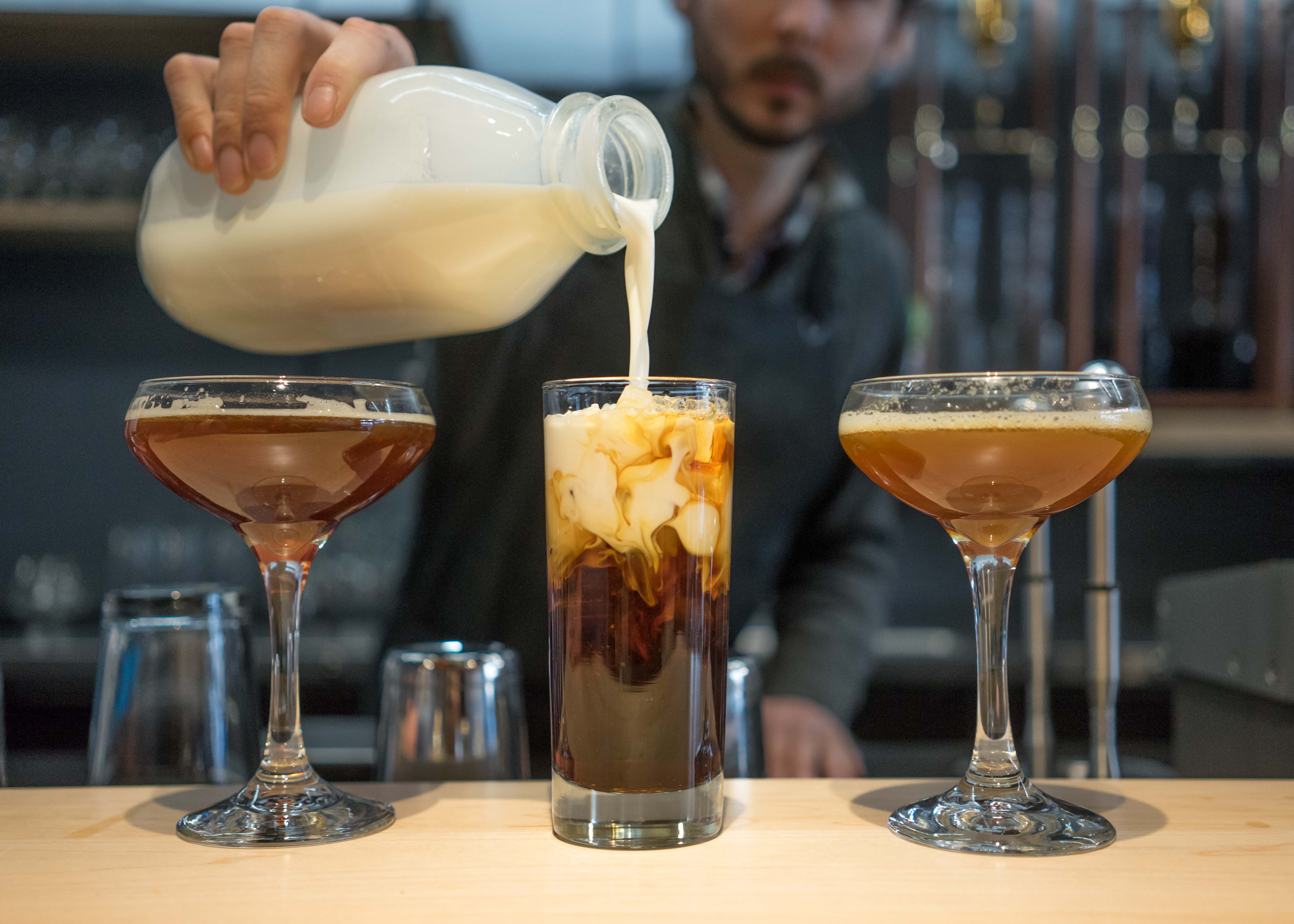 From left: The Winter Flower, the Whiskey Finn and the Heart of Darkness.

The other Kyoto drinks follow in the same vein like the Winter Flower ($4.70) made with a washed Kenyan Kyoto coffee and jasmine and lime. The result is a bit more vegetal almost like it was made with cocktail bitters. Doug Stone, a Corvus employee and creator of the Kyoto drink list, explained it gets that flavor from something similar to bitters, but it is slightly different.

“It’s called Glycerol, G-L-Y-C-E-R-O-L,” explained Stone while having to spell out the foreign word. He explained he uses the glycerin as a base for his homemade “bitters” because it has a natural sweetness and allows him to forgo the use of simple sugar—something he and Goodlaxson wanted to avoid

“It was recommended to be by an herbalist friend,” said Stone of the glycerol

Other drinks include some of their classics created at the original Corvus on South Broadway like the Backcountry ($4.60) made with chicory cold brew, vanilla and topped with cream and an updated rendition called the Whiskey Finn ($5). The DTC version is made with the same ingredients but instead of chicory, it uses whiskey cold brew created from beans aged in whiskey barrels.

Stone explained he drew upon inspiration from his own hobbyist interests with cocktails as well as friends in the industry, namely Phil Zierke at Englewood Grand, who helped them develop the list.

“All the credit goes to those guys,” said Stone with a sense of endearment, that like most things at Corvus was anything but manufactured.

Head down to Corvus to grab a cold brew coffee any day from 6:30 a.m. to 6:30 p.m. and make sure to also check out their new “Steampunk” system which makes a unique single-cup similar to pour over. Also Goodlaxson, who just returned from Colombia, explained they have some new roasts on the horizon that are panning out to be some of his favorites. 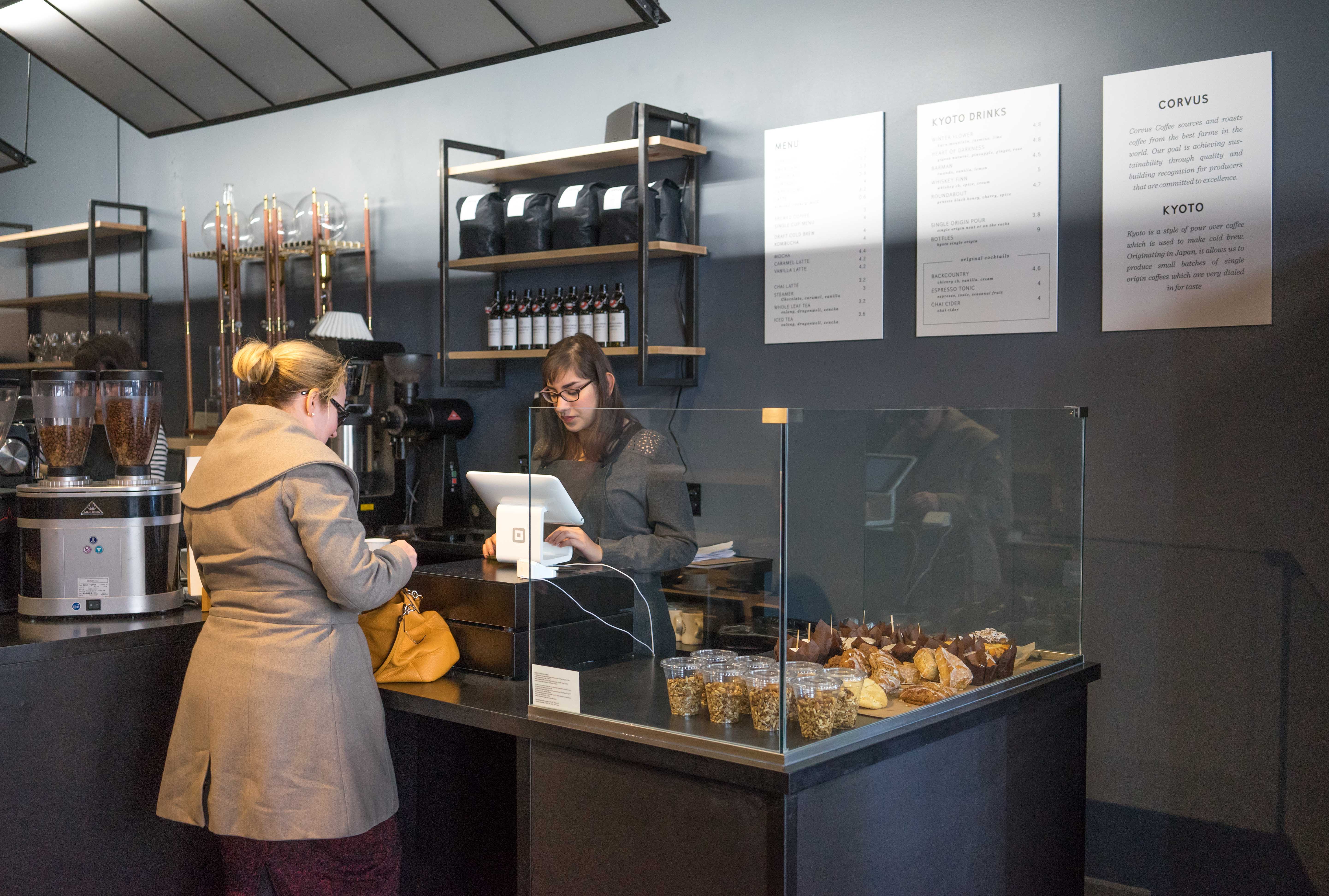 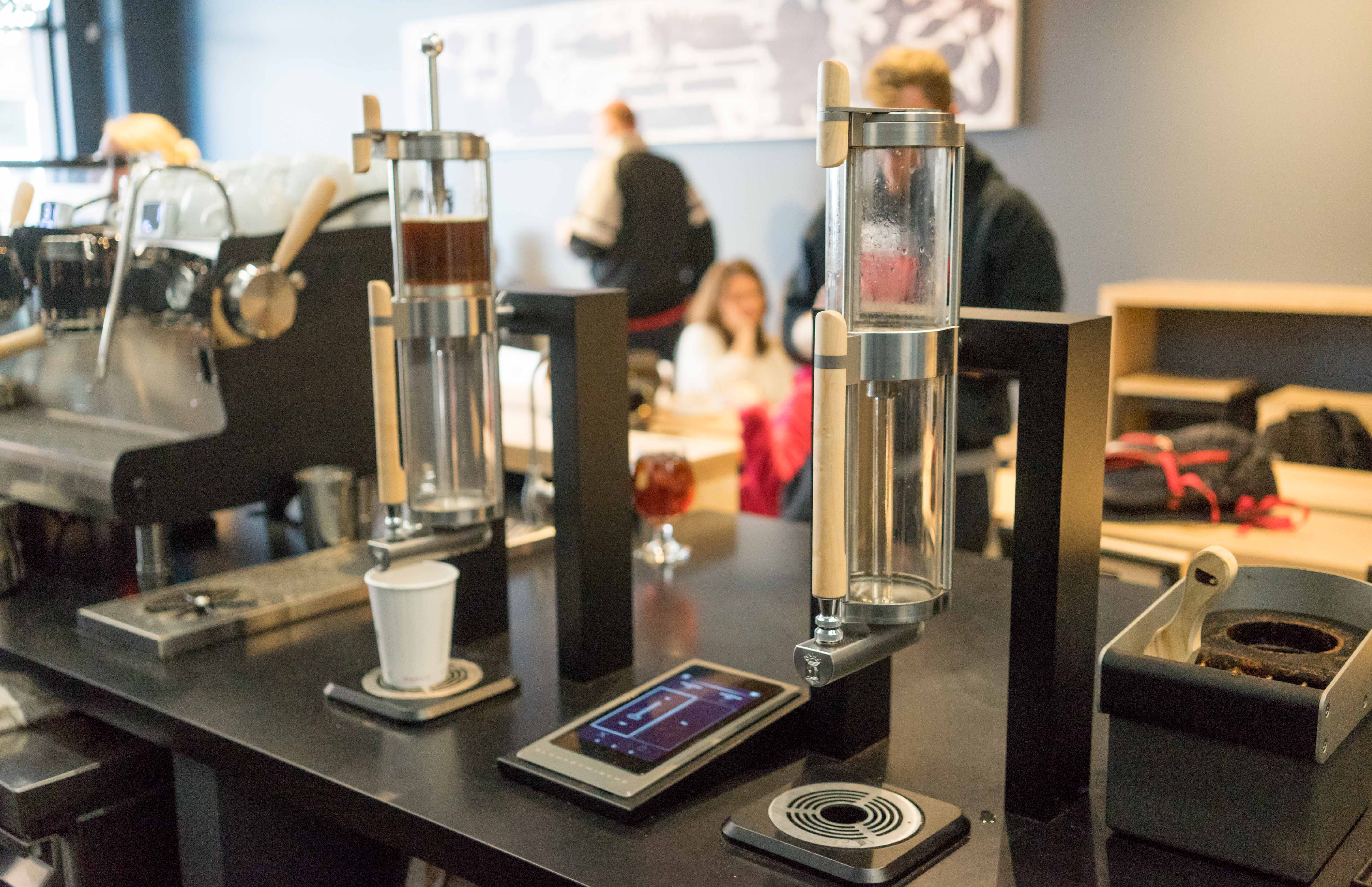