What: A first look at a new cold brew from Corvus Coffee that is “aged” in whiskey barrels from Laws Whiskey House.

Last Friday, in the backroom of Corvus Coffee, Roastmaster Phillip Goodlaxson took a knee. Goodlaxson, a young, wiry man in his early thirties, was waiting patiently for his newest creation to emerge from an accordion-like filter.

“It’s typically used in breweries,” explained Goodlaxson while holding a tube that connected to the filter made up of a series of sandwiched composite plates and paper filters.

For Goodlaxson, using unorthodox methods isn’t new to him. Just last year he released both a cold brew coffee that was infused with hops and a nitro version that’s dispensed via a keg and tap system. Both of these brews have become widely popular, and even resulted in landing a distribution deal at Whole Foods. Now its newest product, one that had Goodlaxson on one knee, has potential to be one of Corvus’ best releases yet… 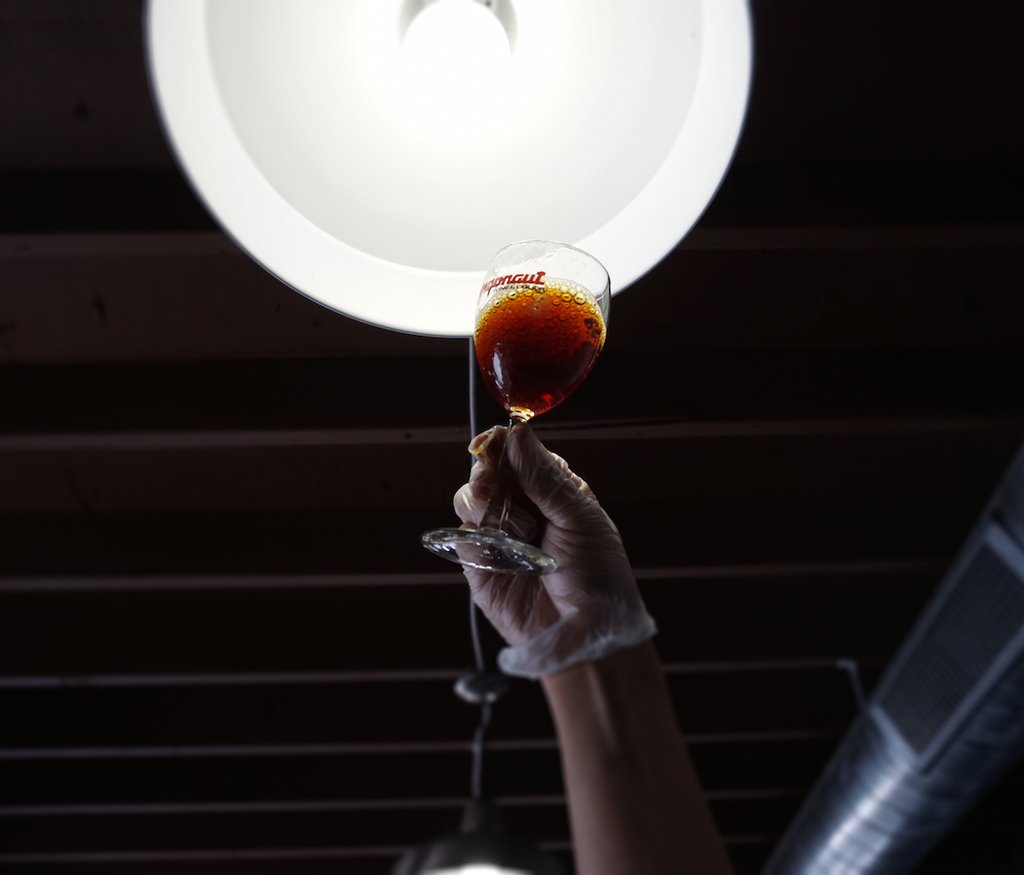 Corvus employee holding the very first run of the whiskey barrel aged cold brew to the light to show its color and clarity after filtration.

Whiskey barrel aged coffee, a special edition roast from Corvus, is created in partnership with fellow local mavericks, Laws Whiskey House. The coffee is made not by placing brewed coffee into whiskey barrels, as one might think, but rather created through a dry infusion. This method, inspired by a once forgotten practice, requires wooden slats of Laws’ Four Grain Bourbon oak barrels to be placed inside a container of green coffee beans for six to eight weeks.

“It’s an old idea,” explained William Fandrick, a Corvus barista. “People would put coffee in barrels as they were shipping. Sometimes the barrels use to have whiskey in them… sometimes even sake. It’s just something that naturally happened as an accident. It had been lost but it’s slowly coming back.”

While the whole beans have been available for several years, with this technique Corvus is now planning to create a cold brew concentrate version — one that 303 Magazine was able to preview at its inception. This cold brew is made with a flash brewing system that uses Corvus’ Rwanda Abakunda roast (selected for its elevated acidity). It is then filtered using the aforementioned “filter press” filter to give it a smooth and refined quality. 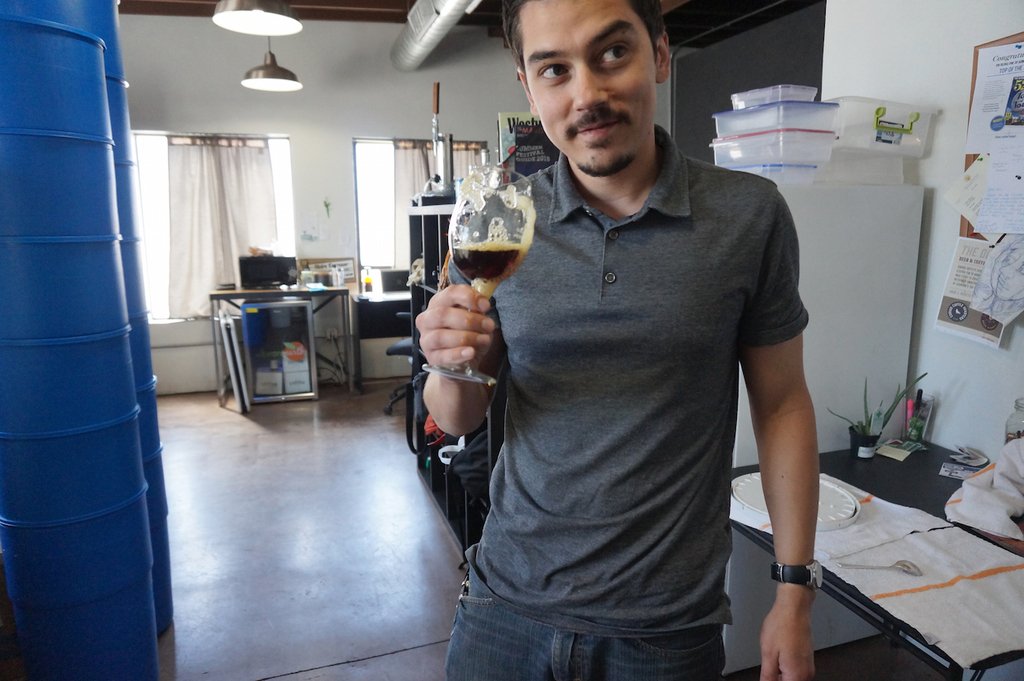 The result of this process is a cold brew with an aroma that would make any whiskey lover salivate. Notes of caramel, oak, vanilla and most noticeably, chocolate, permeate from the barrel aged brew. Overall it’s the essence of an expertly crafted bourbon, minus the sting of the alcohol. Tasting notes are similar with unique distinctions of apricot and caramel expressed through the Rwanda Abakunda roast. Additionally Corvus also offers another roast that is not used in the cold brew but is available as whole beans. This Finca Tasta roast is primarily described as “buttery” and evokes notes of citrus.

Where You Can Get it 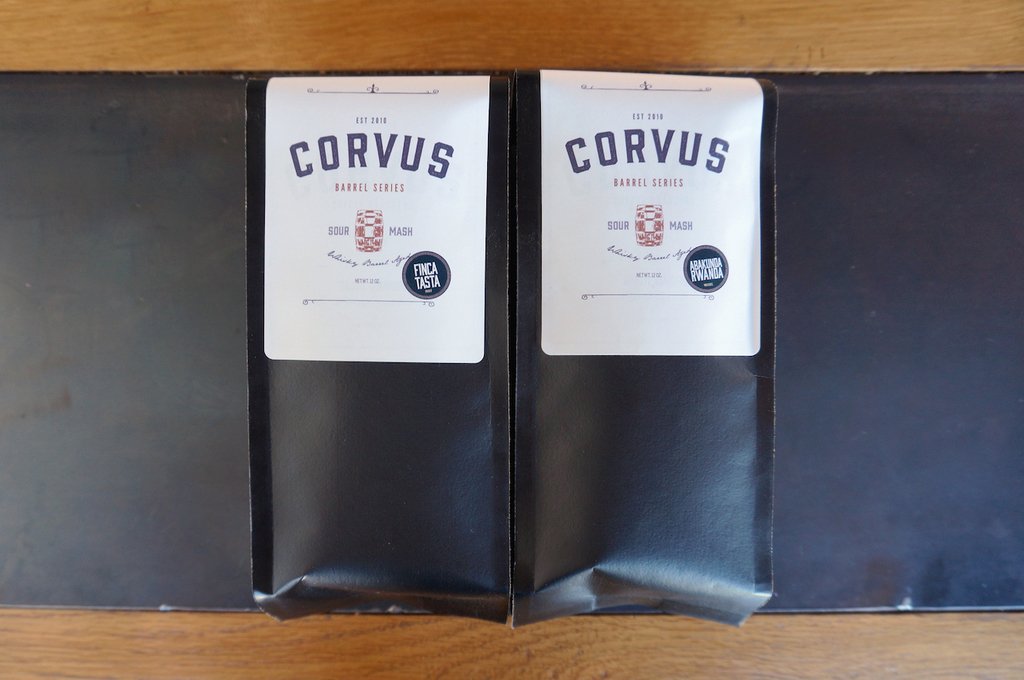 The available roasts of the Whiskey Barrel Aged coffee

Currently bags of whole beans are being sold for a limited run at two Whole Foods locations including Pearl Street (Boulder) and Capitol Hill (Denver). Corvus also has approximately 50 bags in store but according to Goodlaxson, “It’ll go fast.” If everything goes according to plan, the cold brew is scheduled to be available at Corvus and with select partners in six weeks.

As for future experimentations, Goodlaxson is already plotting his next move. He mentioned that he’s interested in working with other types of spirits (our vote is for a wine barrel aged coffee). Also while conversing with his team, Goodlaxson said that they would start working on a cocoa nib cold brew that would be released in tandem with the whiskey barrel aged version.

This might seem overly ambitious, considering only moments ago he was taking the very first sip of his latest creation. But for Goodlaxson, it’s just the nature of his work ethic:

“I really enjoy creating honestly beautiful items,” explained Goodlaxson.  “I love ignoring barriers to entry in order to take on projects which excite me and share that excitement with our customers. If I have an idea, and it seems like a challenge and has the potential to be something which creates a sense of joy and appreciation with people, I won’t think twice about telling our team that we are going to make it regardless of all the difficulties and challenges.”

With multiple successful retail products and a consistently packed coffee shop, Goodlaxson seems to have turned many challenges into achievements. This latest project, we can safely say, is likely to be another home run. Come six weeks and you’ll be able to decide for yourself  —  but until then you’ll have to trust that it’s really as good as it sounds.