Last night Bruno Mars announced his 24K World Tour for 2017. Titled after his upcoming album and single of the same name, 24K Magic, the tour will begin March 28, 2017 in Europe and concludes in Los Angeles on November 11. Unlike some other big-name stars like Beyonce and Rihanna, Bruno hasn’t left out Denver. He will be stopping by the Pepsi Center for a Halloween-week show on October 30. It will be a big year for the artist with 85 dates on the 24K World Tour. The announcement comes just days before the November 18 release of Bruno Mars’ third LP. Tickets will be available Monday, November 21, but you can get early access to tour tickets if you preorder the album now.

The last times Bruno performed near Denver were two nights at Fiddler’s Green Amphitheater in 2014 and a sold out 2013 show at Morrison’s Red Rocks with Ellie Goulding. Since then he’s upgraded (in seating capacity) to the Pepsi Center. More recently, you probably remember him from his 2016 Superbowl performance with Coldplay and Beyonce. You know, that one where the Denver Broncos faced off against the North Carolina Panthers and won? It’s been quite some time since we’ve had the pleasure of hosting the artist, especially considering he’s played two Superbowl halftime shows since his last visit. Get excited, but not too excited because we still have nearly another year of waiting. Regardless, be sure to grab a ticket soon as they’re expected to sell fast. 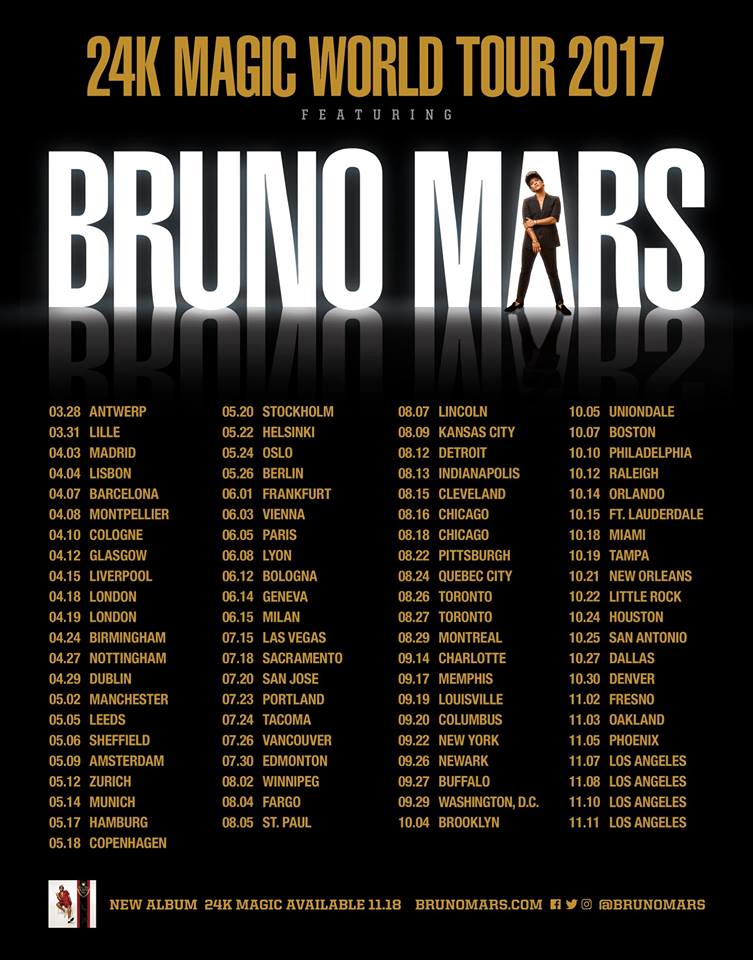