Why We Should All Be Watching HBO’s “Last Week Tonight”

“When you’re dealing with serious subjects, there is a pressure to be absolutely sure that you know what you’re doing.”

For anyone still grappling over the departure of comedy greats Jon Stewart and Stephen Colbert from the world of fake-news, you can rest easy. The pseudo-journalism genre has a new face, and in case you haven’t heard — he’s becoming quite a big deal.

But if the new face looks somewhat familiar, you’re not far off.  John Oliver, the star of HBO’s sophomore series “Last Week Tonight with John Oliver,” previously served as guest host on “The Daily Show” on Comedy Central, where his brief stand-in for Stewart sparked the attention of audiences and networks alike. His British-outsider perspective was refreshing, and certainly effective, and HBO took notice.

The show, which aired last April, follows suit for what Stewart and Colbert pioneered in their satirical news shows — often referred to as the ‘fifth estate’ in journalism.

But where hybrid news has always been a stage for satire — we saw its beginnings as early as the original “Weekend Update” on “Saturday Night Live” — Oliver and his team of writers are progressing from just simply analyzing headlines and news content and instead, are adding an investigative element into the mix. 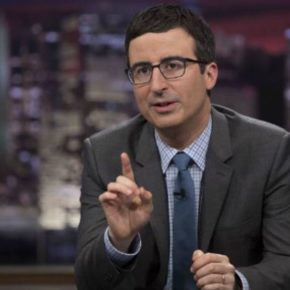 With the show only producing once a week, which is quite a breath of fresh air from our regular 24/7 news cycles we’ve become accustomed to, the writing team has plenty of time to hand-pick from a week’s worth of stories, and dedicate the proper time to do their reporting justice. Some have quipped it to be the “60-Minutes of Comedy,” and, I argue, they’re not far off.

In a more recent episode, Oliver dedicated a near 17-minute segment entirely to food waste in America. His opening montage of piggish food commercials — featuring the new Carl’s Jr. American Burger ad — set the segment off on a lighthearted note, only just dipping a toe in. By the time he was discussing food legislation and tax break payments, a seamless 10 minutes had whizzed by, and Oliver quickly deflected our attention away from the food we do eat, and set us toward the real meat of the segment, the food we don’t — a whopping 40% of all food produced in the U.S., that is, more than enough to fill 730 football stadiums.

But what makes comedy hybrid shows like Last Week Tonight so culturally important is the delivery of their point. Rather than leaving our heads reeling with numbers and statistics, the complicated is put in layman’s terms, and a comedic coating makes the pill much easier to swallow.

Where there’s a red-faced delivery of government talk and statistics, a comedic time-out soon follows, which usually, and not coincidentally, hammers his point home even further.

“At this rate, in 40 years, when you order a pizza from Domino’s, they’ll just deliver it straight to the nearest dumpster — as they should — but that’s not the point here.”

And to his point about the Senate passing a food legislation bill regarding simplifying food donation that was completely gutted and refilled with language discussing border patrol and U.S. Israeli Relations rather than food waste:

“It’s like going to a restaurant and ordering a veggie burger and having the waiter say, ‘Here you go, we made it out of meatloaf and we call it a waffle.’ And then, you can’t even say, ‘Well, I don’t want this, give it to someone who needs it,’ because they can’t, because they don’t know whether or not they’ll get a tax credit for it.”

And while on previous TV-news shows, like that of Jon Stewart or Stephen Colbert, where the news topic they bring to the table lays as the groundwork for the show’s jokes and humor, Oliver appears to be taking an alternative route,  using the humor to better the story. He uses punchlines to disguise the stuff that’s hard to swallow, making it easier for us listen. And so far, he’s been quite successful in doing so.

Oh, and did I mention he’s funny?

You can catch John Oliver Sundays on HBO.