Pro: Unique cocktail selections, excellent bar seating, extensive wine menu and a unique cocktail list. Pro tip: The bar area (which also consists of two tops) doesn’t take reservations but you can reserve a spot in the main dining room.
Con: The interior is a little dark, so if you plan on eating there during the day (once it is open for lunch and brunch) grab a seat on the patio.

“I like to be an individual… I don’t pay attention to what everyone else is doing,” explained executive chef and owner of Milk & Honey Bar and Kitchen, Michael Shiell, as he stood in front of a room of food writers mid-day Thursday. Some of the writers remembered him from his former days at Michael’s of Cherry Creek, his title restaurant that garnered him enough prestige that its name still resonates. Shiell, who left Denver 15 years ago to pursue a career in restaurant consulting, has finally returned to the kitchen with the debut of his newest spot. And according to him, it’s meant to be something unique. “I do things my own way, I go out to eat but I don’t pay attention to what everyone else is doing,” he elaborated. “It’s instinctual for me.”

The result of his instincts is Milk & Honey Bar and Kitchen, a restaurant that, for the last two years, was literally hand carved from the bedrock of 1414 Larimer. And while the restaurant has ironically come under fire for its copy cat name with a famous NYC bar, everyone seems to be intrigued by his return. What will a former Denver chef bring back to the city after it has grown so much? Will it still be a cut above the rest, or will he find it hard to adapt? But more importantly, will it inspire you enough to go? Let’s find out… 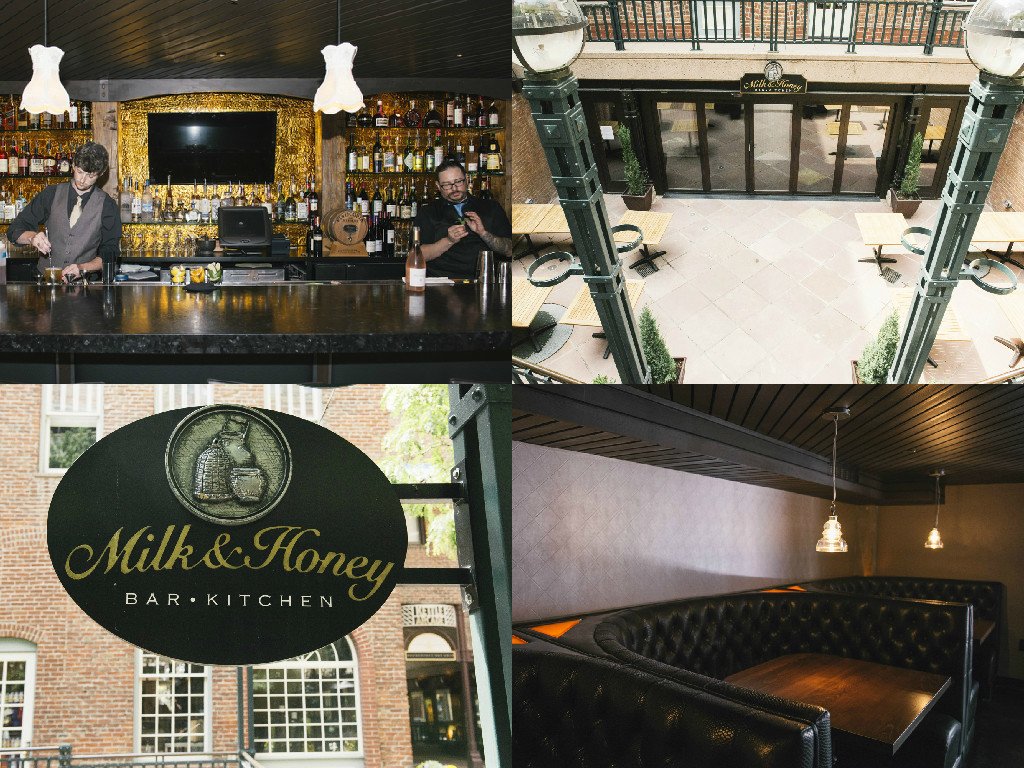 All photography by Elisha Knight

Located in the belly of a historic 150 year old building, Milk & Honey underwent huge renovations in order to bring it to its current state. And while it took over two years to transform the space, the changes made were incredibly painstaking. Because, due to the historical status of the building, everything had to be done by hand. Meaning that when they decided to replace the decrypted plumbing, the construction crew had to dig six feet into the ground using pick-axes — pioneer style. Fittingly enough, they even struck gold (as we earlier reported here), but the amount only came out to a measly 28 bucks. Fortunately, they have much more to show for their efforts.

Milk & Honey is beautiful a den-like joint highlighted by a contrast of dark wood, exposed brick and shimmering gold accents. Elongated white leather banquettes line the room, while black snake skin booths, embedded in snug alcoves, cap the space. Curtains of thick metal beads hang in the cutouts of the brick walls, creating a partition between the dining room and the bar area. Overall there are 160 seats total in Milk & Honey, including a private wine room, and ample bar seating that features a deep bar top designed to give enough space for full dinner service. Also outside, beyond the fully retractable accordion doors, is a brick patio (which also serves as its entrance). This secluded spot, located in the privacy of the courtyard beyond the Larimer breezeway, is one of Shiell’s most cherished aspects of the location and will assuredly make for pleasant al fresco dining. 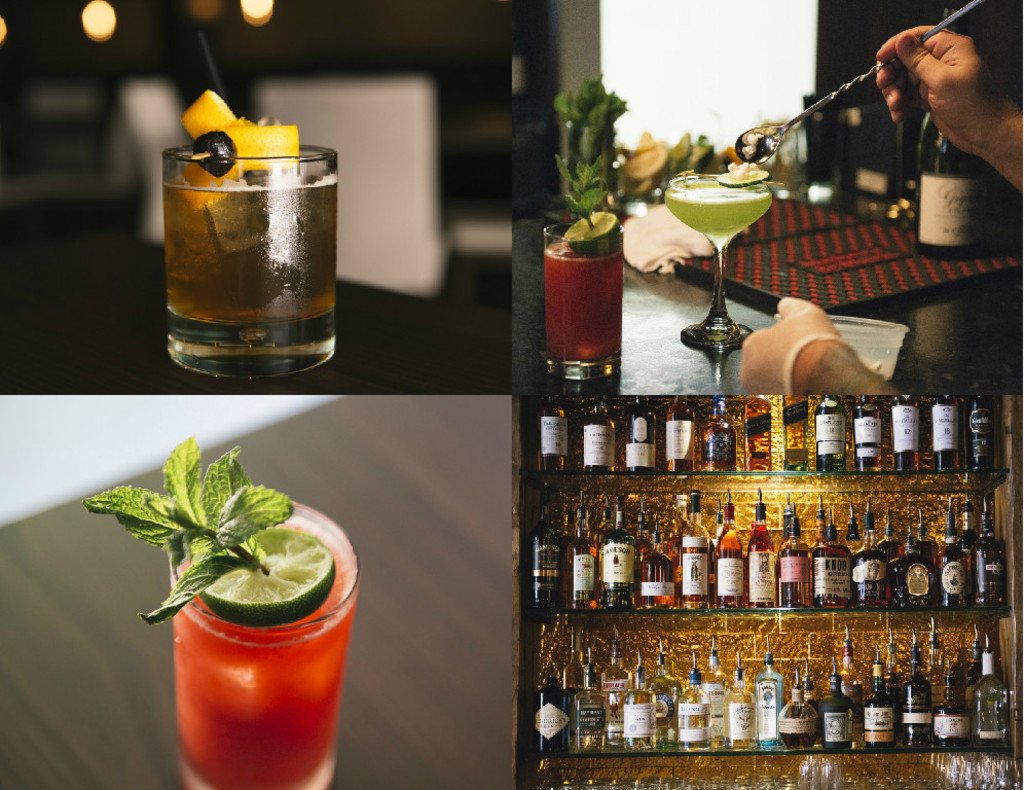 The beverage program at Milk & Honey was created with wine in mind with an offering of approximately 150 labels and a dozen by the glass. Selections were curated by Shiell and feature a “regional and reasonable”collection including a wide array of Pinot noirs and varietals. But while the wine program is meant to sit center stage, the inventive nature of the cocktail program might outshine it…

Created by Dante Reesman in partnership with Shiell, the beverage program highlights the use of house made elixirs and tonics that are infused with vitamins (B12), superfoods (flaxseeds) and essential oils (such as ones extracted from wild cherry bark). This “holistic” approach aims to leave the imbiber with in an improved mental and physical state (at least more so than other spirit-based drinks). Classics will also be available but for those seeking a more unique buzz, certain listed cocktails come with interesting benefits. Take the Plymouth on the Rocks ($11) for instance which is said to be infused with yohimbe, a bark extract that is supposedly the active ingredient in Viagra. The effects (if any) are unclear. But don’t say we didn’t warn you… 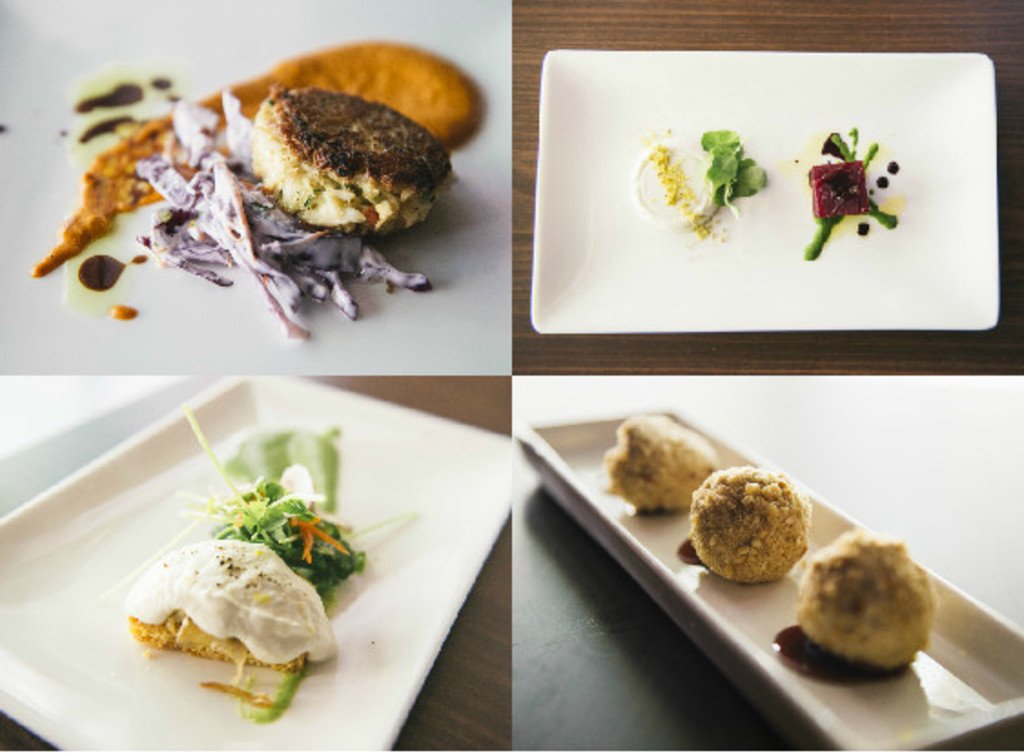 Designed in partnership with Lance Barto, formerly of Brazen Denver, the menu is broken into three parts. First are the small bites (alongside a charcuterie selection). Ranging from $7 – $11, the list includes options like the foie gras bon bons ($9) coated in a cashew brittle and dipped in liquid nitrogen to a chèvre panna cotta ($9) paired with roasted beetroot, parsley pistou and mache. Next are small, shareable plates of slightly enlarged portions and prices ($9-$14). Options include a pair of oxtail tortelloni ($10) the size of mini coin purses to crab cakes ($14) served with a crisp red cabbage slaw, and a house ricotta ($9) topped with fennel, a honey vinaigrette, and pea tendrils that were grown specifically for this dish. Larger plates round out the menu with items like a pan roasted halibut ($33) topped with a parmesan foam, and laid over a ragout of fava beans and mussels. Sides or “extra stuff” are also available along with a few oysters and clams priced individually. The menu, although not labeled as “seasonal,” will change based on what ingredients are available and what diners respond to. “It’ll be relatively organic,” explained Barto.

As for Shiell, it’ll be interesting to see how this chef adapts to the current scene while he warms up to being back in the kitchen. But he seems confident, stating that “the culinary knowledge of the staff is light years ahead of where it was.”However will that, coupled with Shiell’s experience, be enough to compete with the rest of Denver? Or has too much time passed? Only a healthy dose of covers will tell. Until then go check it out and tell us what you think by tweeting us at @303_Magazine or to @brittanywerges. We’d love to hear your thoughts.