The Morning After: 5 Essential Weekday Brunches

With a little effort (or perhaps more appropriately, none at all) you can make any day feel like a Saturday or Sunday. Whether you work hours outside the 9-to-5 realm, have some sick days saved up or just feel like playing hooky, the best start to any lazy weekday is a late breakfast. Here are five of the city’s best “brunch” spots that are open Monday through Friday, so you can avoid the lines and feel at least a little less guilty about taking your time… 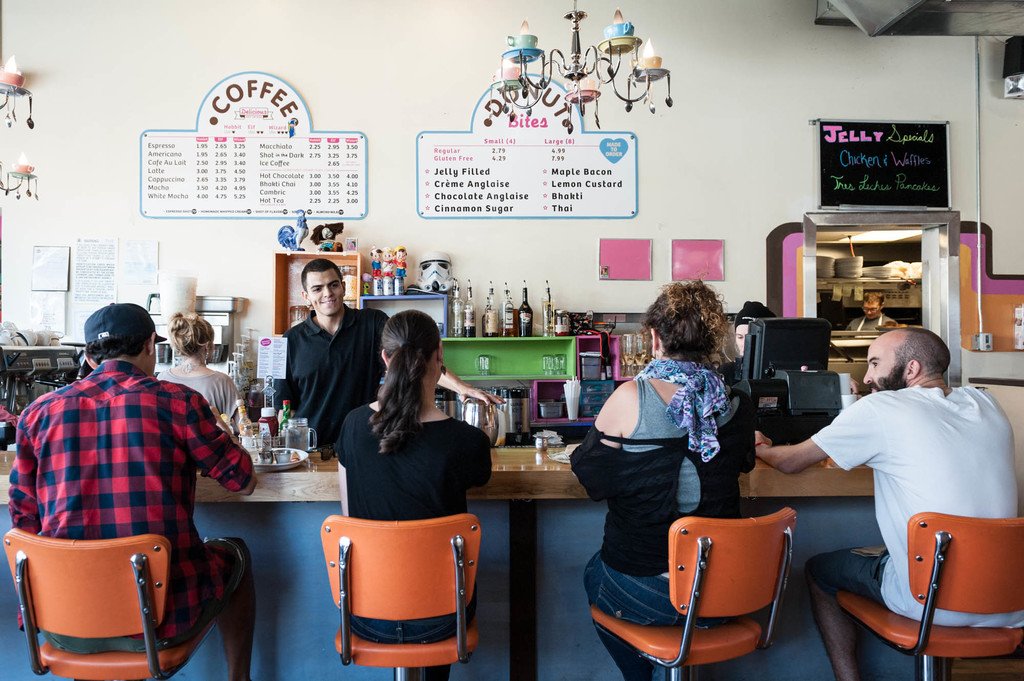 The Lowdown: The Capitol Hill brunch mainstay, Jelly, opened in 2011 (there is also JellyU, near DU campus) and has experienced line-around-the-corner success ever since. Jelly’s décor suggests a religious respect for the art of all things breakfast: Vintage cereal boxes adorn the walls like gallery art, the hostess stand is a repurposed television set tuned to cartoons and Jelly’s logo shirts portray a piece of toast gleefully covering itself in the restaurant’s namesake spread. It all lends to the restaurant’s unparalleled character and charm. Try any of the delicious breakfast sliders ($7.69 for two, $8.99 for three) or the cornflake French toast ($8.69).

The Morning After: DFW Brunch at Jelly- 303 Magazine 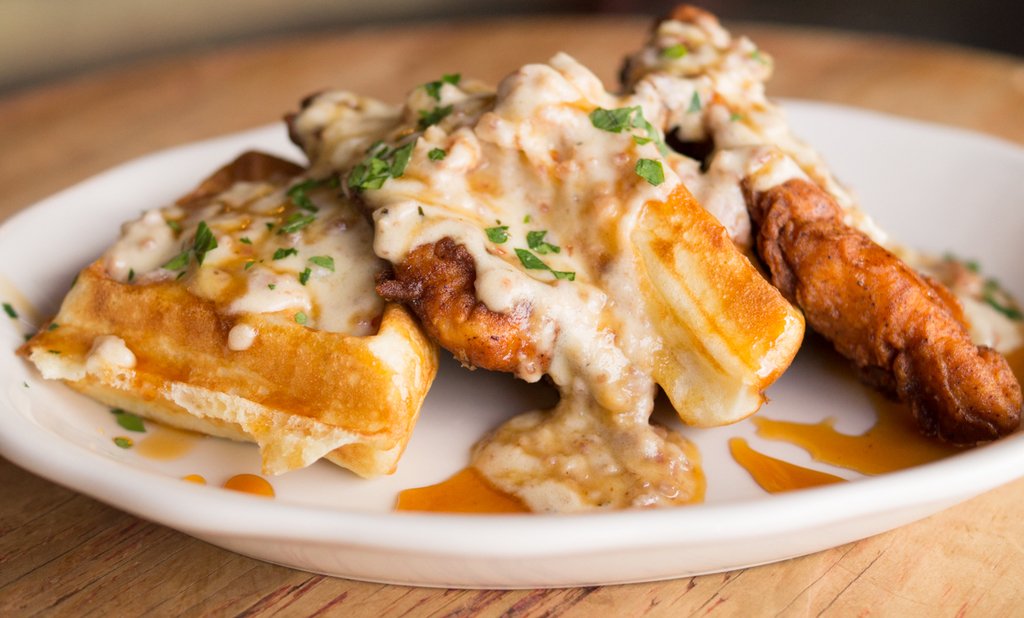 Pro: The chicken & waffles plate is my favorite in the city.

Con: Some of the healthier options could use some extra flavor.

The Lowdown: Like Jelly, Devil’s Food is notorious for the long lines that gather there early on the weekends. Generally it seems that people will wait as long their patience pays off, and at Devil’s Food this is never an issue: home-style cooking takes center stage and all the dishes have the filling, curative quality for which brunch is known and loved. Try the saucy eggs & cornbread ($11.50) plate with smoked pork belly, chipotle sauce, hollandaise and grilled pineapple salsa or be converted to what I believe to be the best fried chicken & waffles ($15) plate in Denver, which is smothered in sausage gravy and chipotle honey. The rustic, homey appeal on display at Devil’s Food is secured by virtue of the restaurant being a “cell phone free environment,” making it a perfect place to take that one friend who wouldn’t be able to help herself otherwise.

The Morning After: Neighborhood Guide to Chicken & Waffles- 303 Magazine 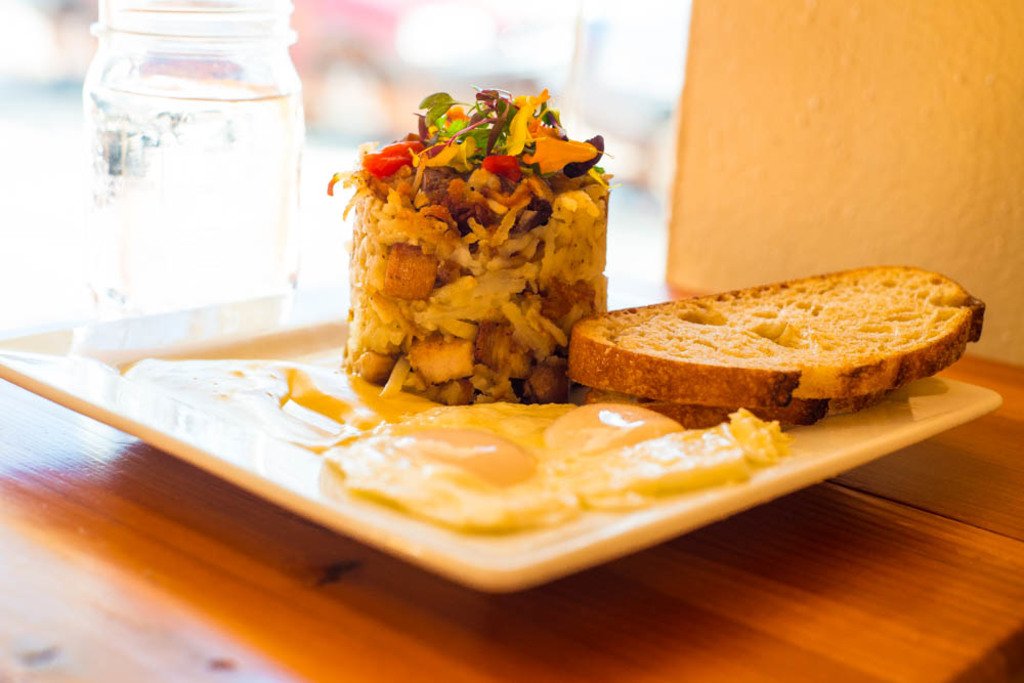 The Lowdown: This neighborhood eatery/local grocery offers fresh food at fair prices; any brunch here can be a fun preamble to an afternoon spent wandering around Washington Park. Though the dining space is small, it gives off the familiar and laid-back vibes befitting its reputation as a well-kept local secret — not to mention the demeanor of owner Tim Lymberopoulos, who is usually right at the center of the action. The relationships he has been able to form with other local vendors and growers ensure the quality of all the ingredients. Go for the pork belly hash ($13) and the cinnamon apple brioche French toast ($11).

The Morning After: Fresh Fare at Fooducopia – 303 Magazine 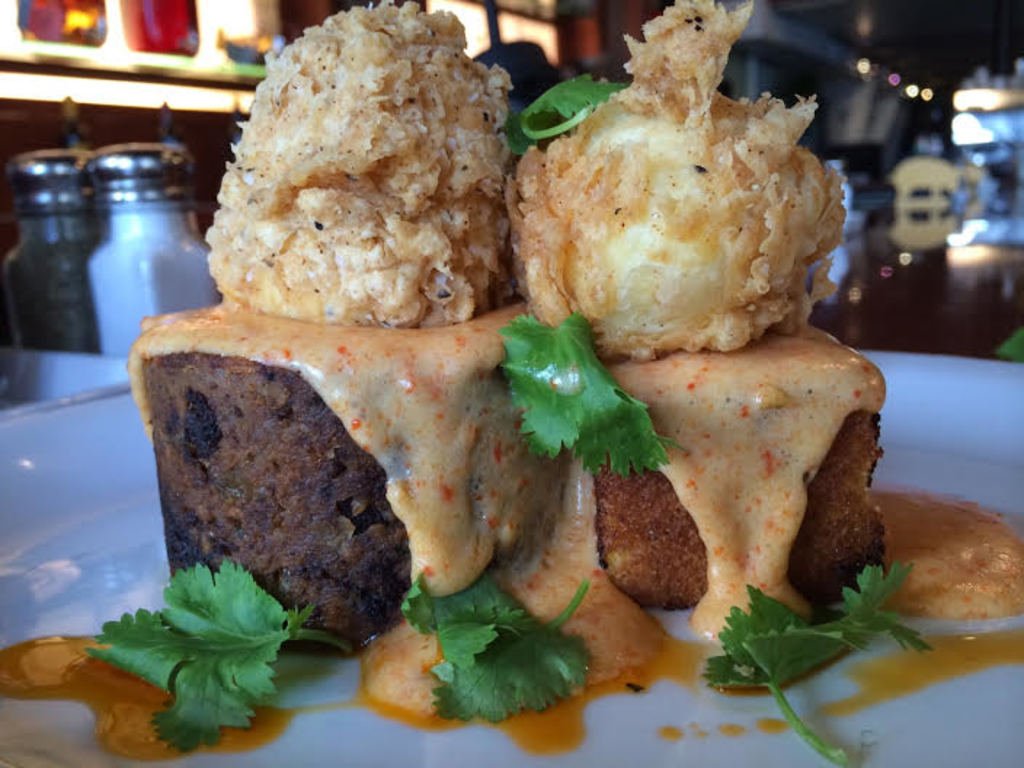 Pro: The beignets are just right, and on Mondays they’re half off!

Con: A few of the entrees can skew toward too rich and salty.

The Lowdown: Sassafras is one of a surprising number of restaurants that feature Southern food in the Denver Metro Area. The second Sassafras location, which opened last year, occupies a rather inconspicuous section of Colfax, just a few blocks east of Broadway. Sassafras’ comprehensive menu of American comfort food includes a host of distinctly New Orleanian staples like beignets, boudin balls, etoufee, and yes, even the muffaletta sandwich ($12), making it a great choice for brunch just a stone’s throw from downtown. Not ordering the beignets ($5) would be a grave mistake; the po’ boys ($12-$14) are also quite good. 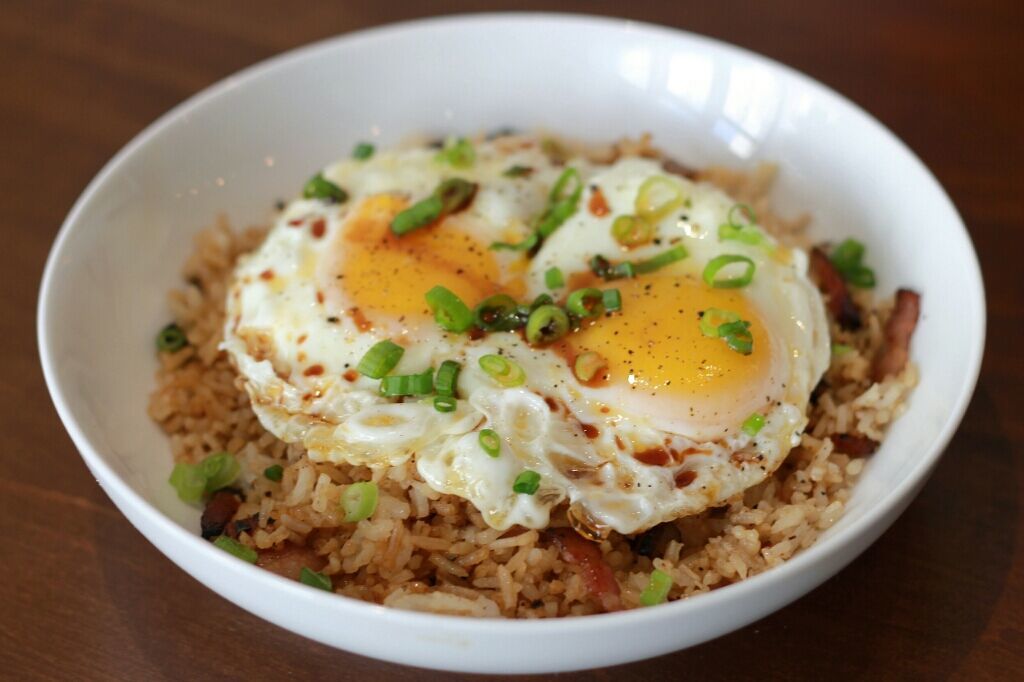 Pro: The Vietnamese iced coffee is so good it will make your day.

Con: But at $4.95, the Vietnamese iced coffee could be a little more affordable.

The Lowdown: This new restaurant has made fast friends of nearby residents and commuters alike due to its clean, chic look, and unforgettable recipes. There are only seven items on the menu, so what to order really depends on where your cravings lie at any given moment. That said, I’ve gone back (and will again) for the bacon fried rice ($8.95) made with soy sauce and chili oil fried rice with Tender Belly bacon mixed in, and topped with two eggs fried in duck fat. Onefold now also has a lunch variation cooked with ham instead of bacon — same goes for the breakfast tacos. Any of the entrees pair well with the homebrewed bone broth ($3.99 for a small), local teas and coffee, though the condensed milk-sweetened Vietnamese iced coffee is the clear leader of the drink menu.

The Morning After: Onefold’s Simple and Elegant Weekday Brunch – 303 Magazine