Got the munchies? 303 Magazine is here to the rescue. Below is a collection of some of our favorite restaurants that offer a range of eats worthy of that #dablife. Read on to get our list of everything from quintessential cottonmouth cures to cozy comforts including a couple of the swankiest spots for the posh pothead. 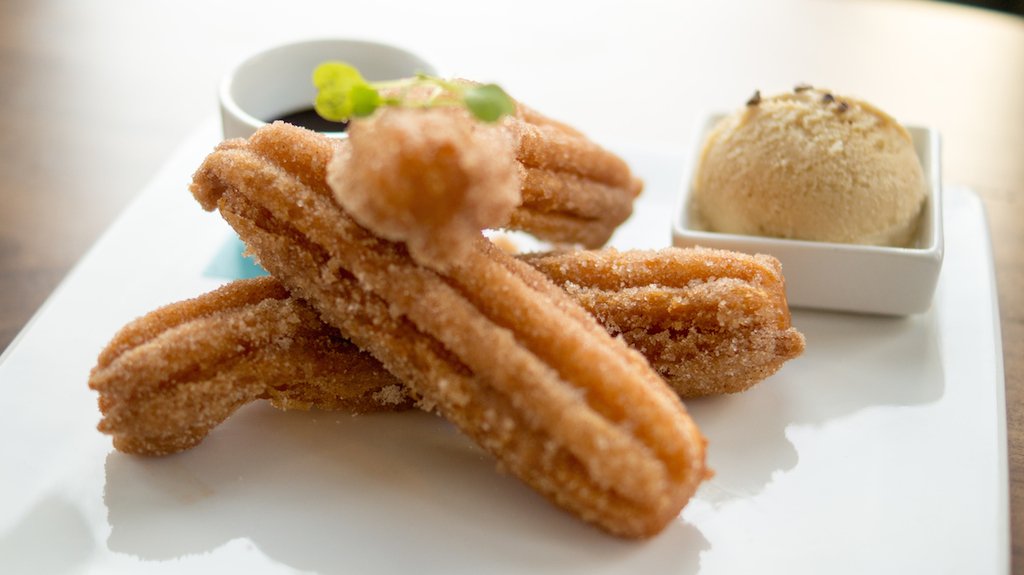 The Low Down: Recently relocated, this Uptown gem specializes not only in delicious desserts, but its lunch and dinner menus are jam-packed with mouth watering items worthy of  most intense munchies. What stoner doesn’t like the sound of bacon mac n’ cheese made with Cheez-Itz? Or how about duck confit nachos and a chicken and waffles sandwich? “Oh hell yeah” is what you’ll be mumbling under your breath while realizing everything on the menu was made for this moment. Want to know the best part about being high at D Bar? Everyone expects you to order dessert. That means even if you did just devour a mountain of food, it won’t seem weird that you also want to get a three-layer chocolate cake. It simply comes with the territory. Excellent dessert options include the ch-ch-ch churros, that are sure to make you stutter with delight, and the quintessential cake ‘n’ shake, a triple decker chocolate cake served with a classic milk shake of your choosing. 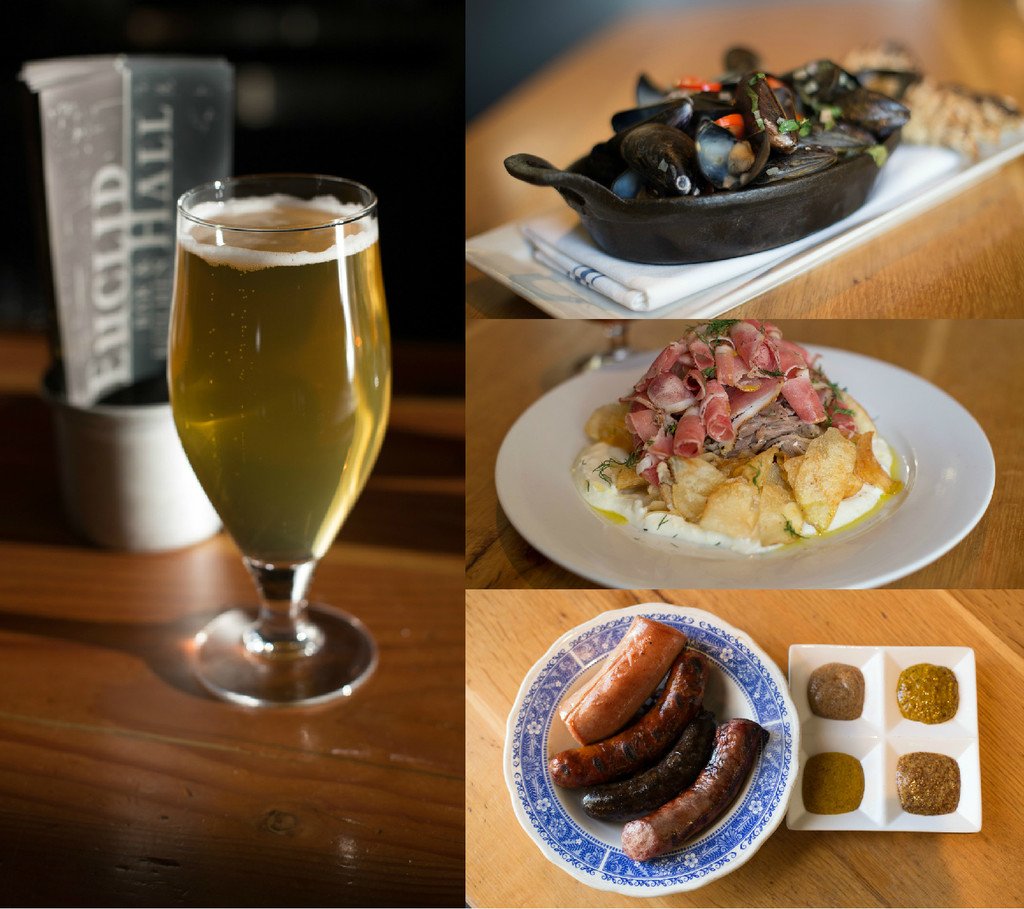 The Low Down: Euclid Hall is no stranger to the unusual. During its former glory it was known as Soapy Smith’s, a bar named after a notorious Colorado con man that made history for his infamous scams. Before that it was a high-class brothel where politicians and notable businessmen alike went to get their freak on. So needless to say a lot of weird shit has gone down at this historical building now known as Euclid Hall. Today the self-proclaimed “American tavern” continues with a streak of strangeness by offering a slightly off-the-wall menu. But despite the eclectic items like pig ear pad thai and bone marrow, there are a lot of great options for those amidst high times. Euclid Hall serves not just one but three decadent poutines, fried cheddar curds served with a buffalo sauce and delicious desserts like a sourdough waffle ice cream sandwich. Choose one or order it all, then chill out while sipping on a beer from its extensive collection of Colorado craft beers. 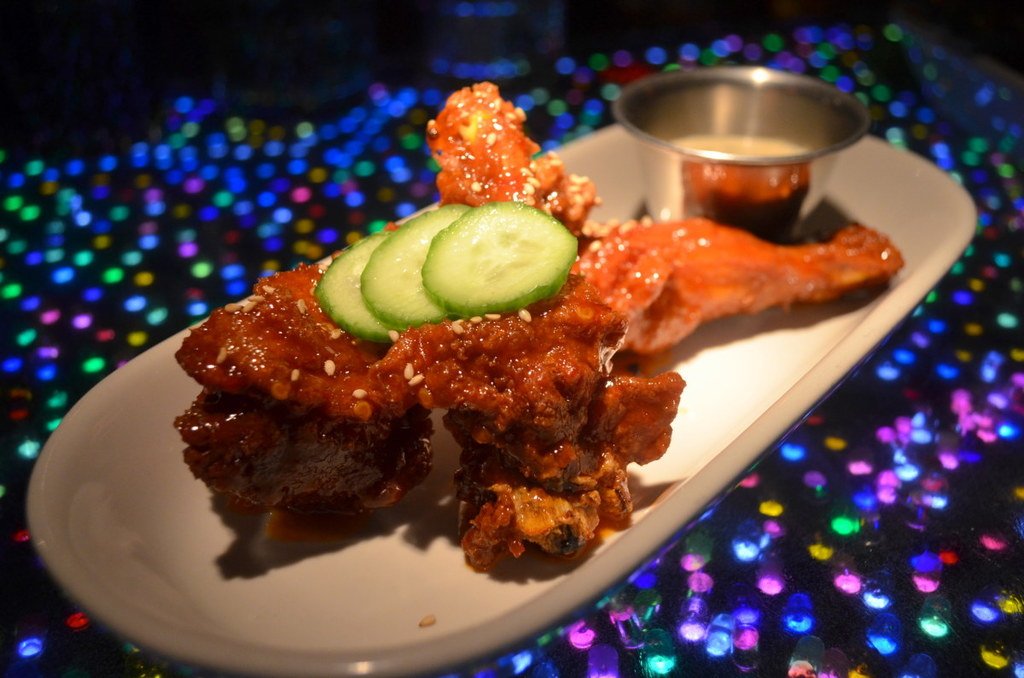 The Low Down: Outfitted inside the former Olinger mortuary, Linger is known for its quirky vibe that playfully pokes at death in a non-anxiety inducing way. Come relax at this award-winning restaurant and discuss your stoned thoughts on existentialism while eating food from all over the world. Try any of its internationally inspired steamed buns for an appetizing adventure. For something more close to home, Linger offers wagyu sliders served with sweet potato fries and chipotle ketchup. Also make sure to order the honey-Sriracha duck wings during happy hour just for the hell of it.

Because if there is one time to order dessert, it’s now. 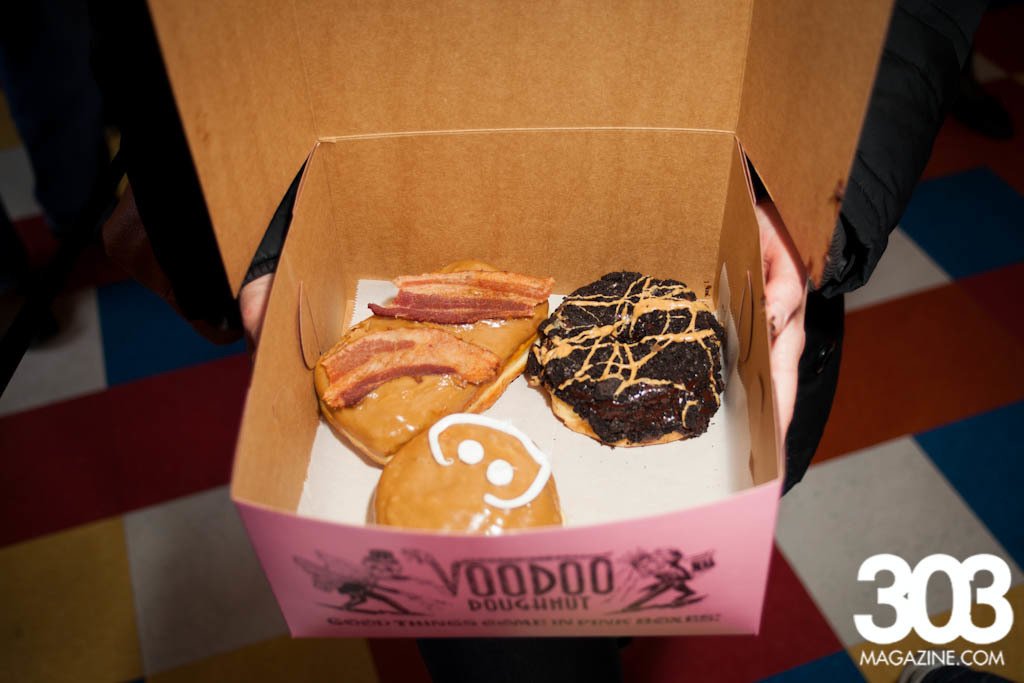 The Low Down: If you find yourself still hungry late at night or if you’re just really craving a doughnut, Voodoo Doughnut is open 24 hours and doesn’t disappoint. For the ambitious stoner, it has the Tex-ass Challenge, which is a massive doughnut equal to six of the regular sized variety. Or you can really go big and get the rapper’s delight which is three different doughnuts: the Old Dirty Bastard (chocolate frosting, oreos and peanut butter), the Marshall Mathers (vanilla frosting and mini M&Ms) and the maple blazer blunt (cinnamon sugar with maple frosting and red sprinkles, rolled to resemble a blunt). All three of these are sold for $4.20, of course. Make sure to bring cash with you or be prepared to use the ATM outside the store. 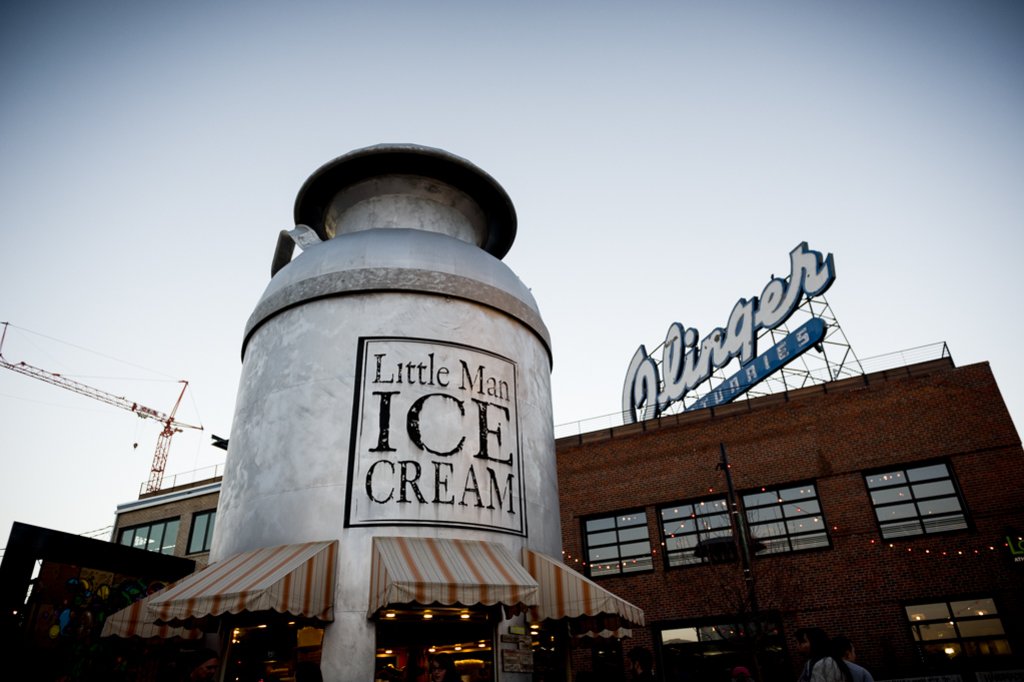 The Low Down: Situated inside a building shaped like an old-fashion milk bottle, this ice cream stand is the obvious first choice for anyone who finds themselves on a warm Denver day with the munchies. It’s a local favorite so a line is inevitable but the product is worth the wait. Customers can choose from sundaes, shakes, splits, floats or handmade waffle cones with awesome flavors like Bhakti Chai (made with chai from Boulder), Cinnabun, milk stout chip (made with a Colorado milk stout beer), vegan horchata or the essential vegan munchies (a peanut butter ice cream with chocolate and butterscotch chips along with peanuts, almonds and marshmallows). If you’re still not convinced, Little Man offers potato chips as a topping. 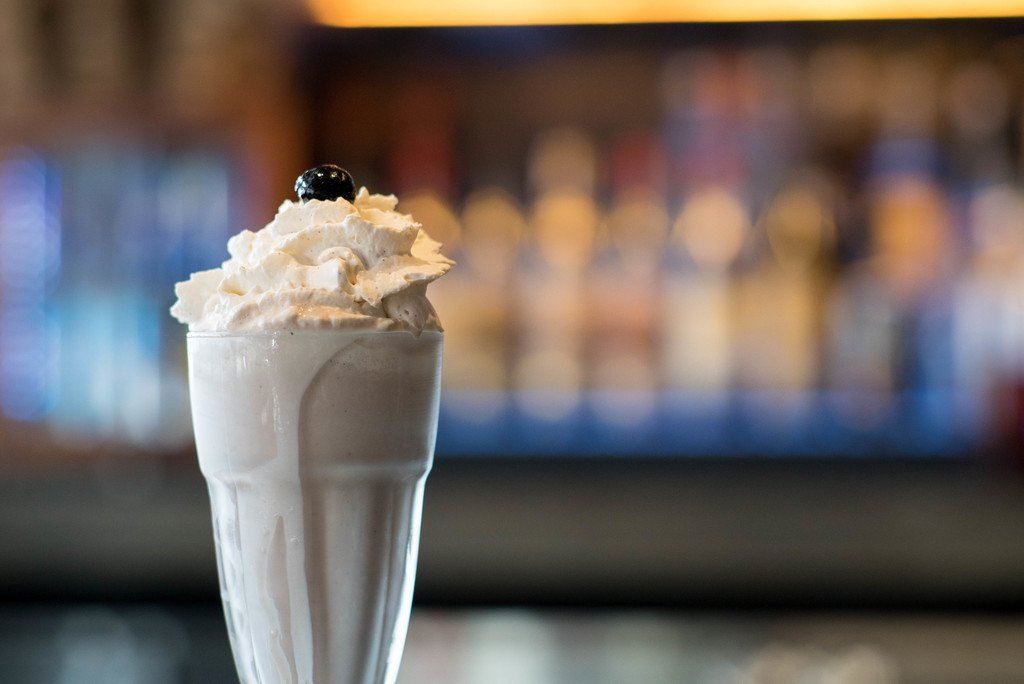 Where: 320 E Colfax Ave., Denver
Neighborhood: Capitol Hill
The Low Down: Sassafras might be best known for its Southern brunch featuring classics like biscuits and gravy, grits and beignets, but we’d argue its sweeter side is worth some hype. With over 15 different milkshakes to cure that cottonmouth, partakers can enjoy concoctions like chocolate dipped bacon, Cinnamon Toast Crunch or chocolate salted pretzel. Just sit and sip while enjoying the cozy atmosphere reminiscent of the Big Easy.

Perfect place for: the stoner that has permanent cottonmouth and is always holding a half-full Mountain Dew. 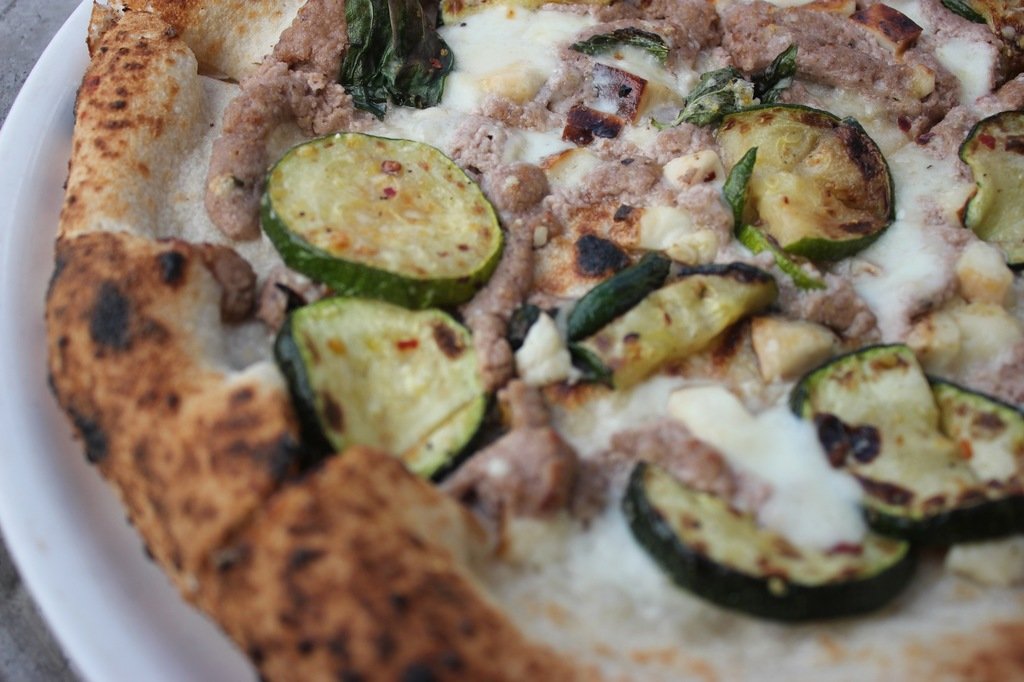 The Low Down: With nearly 15 different pizza options plus the ability put anything you want on one large pie, stoners can rejoice while eating a pizza all to themselves. Too hungry to wait? Marco’s also offers pizza fritta, which is fried bits of pizza dough that come with various toppings. What stoner could refuse that? In addition to these awesome savory pizzas, Marco’s offers some insane dessert options including a sweetened ricotta and honey pizza and the dessert pizza every stoner has been waiting for: a Nutella stuffed pizza. 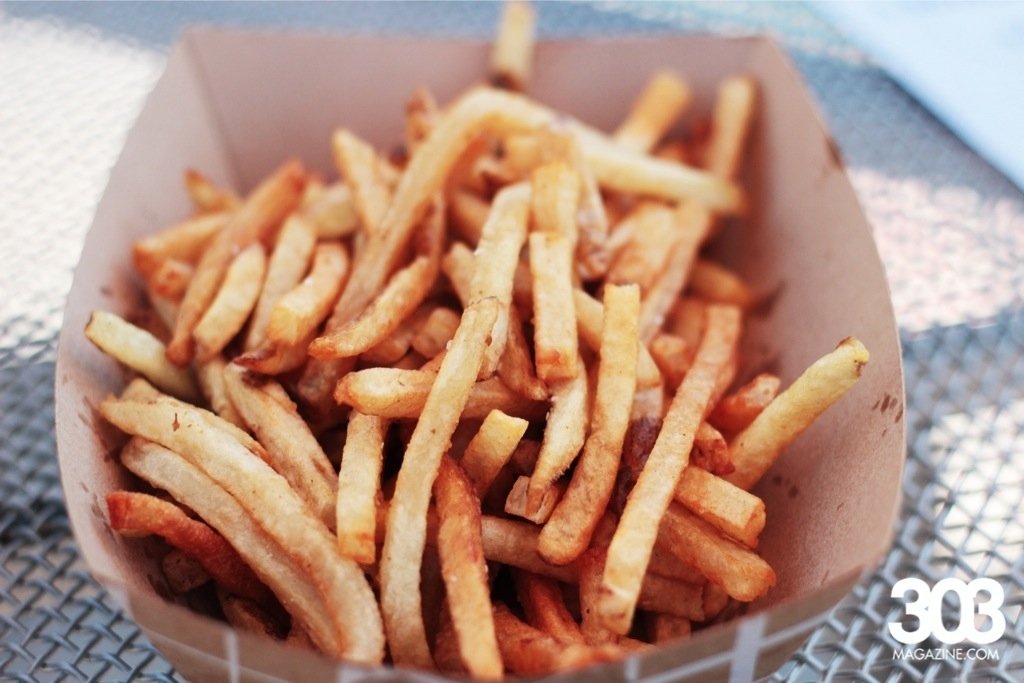 The Low Down: Steuben’s provides that classic diner atmosphere where stoners can share reasons why they think they were born in the wrong era (the ‘60s were awesome but get over it). The menu here is stuffed with satisfying, warm comfort food like mac ‘n cheese, roasted chicken and mashed potatoes. Take note: Steuben’s offers sizzling bacon as an appetizer so you can munch on that while deciding what else to eat. For the hungriest of folks, try the green chili cheeseburger or the smothered breakfast burrito. And don’t miss the gravy cheese fries for obvious reasons. 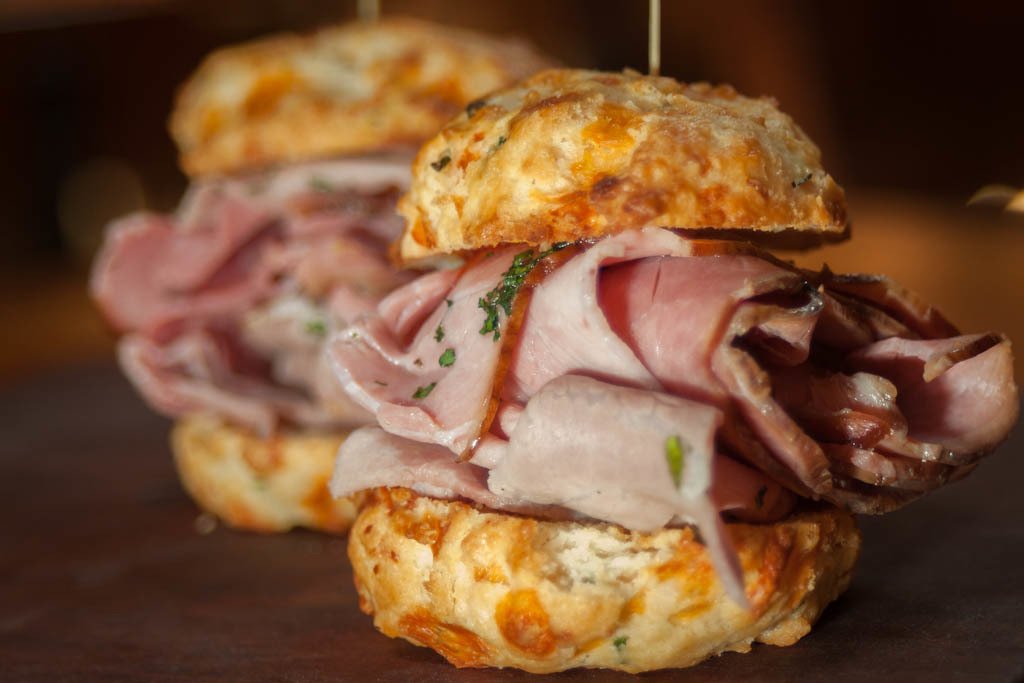 The Low Down: Though bread-based dishes are often avoided by smokers for fear of cottonmouth, these involved creations are not to be missed. Besides, you can follow any meal with some mimosas, both to wash down the food and because the champagne will feel like fireworks in your mouth. Enjoy any of the biscuit sandwiches or try the platters. We recommend the biscuit pot pie (a biscuit smothered in hearty pot pie filling) or the biscuit french toast doused in both syrup and honey butter. If that doesn’t sound hearty enough for you, Denver Biscuit Company also offers more than four biscuit sandwiches that come with buttermilk fried chicken. 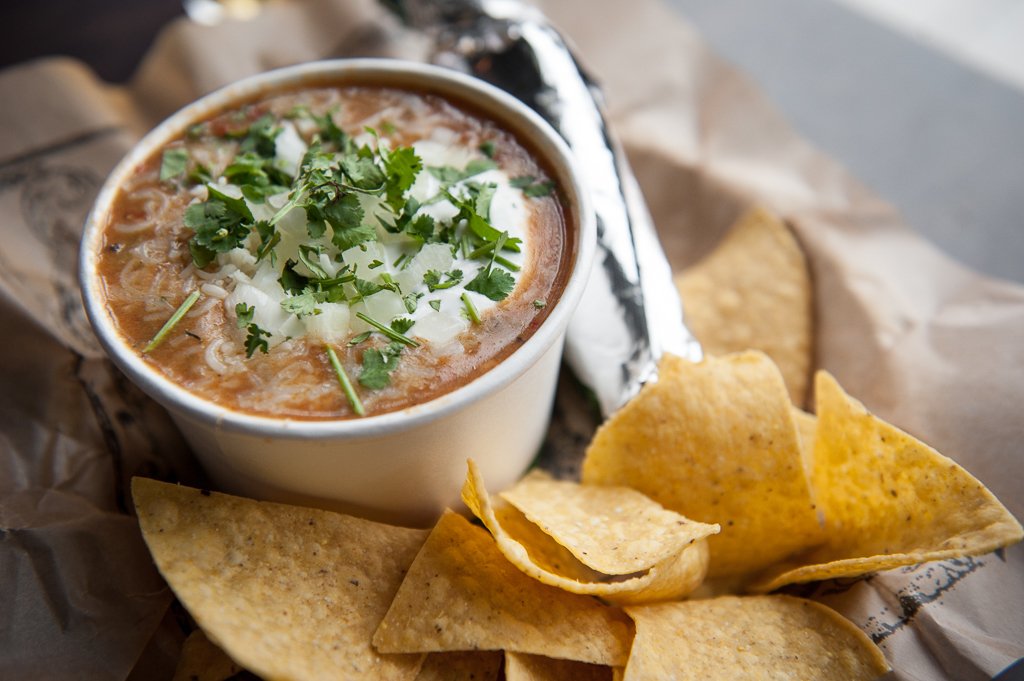 Where: 4301 E Kentucky Ave
The Low Down: While in Colorado, anything covered in green chili is considered a comfort food and this cult-classic restaurant is known for specializing in all things smothered. At any one of the five Las Delicias locations you can practically drown yourself in a pool of green chili while snacking on endless supplies of chips and salsa. Also as a bonus, for dessert you can order the fried ice cream, which consists of balls of ice cream dipped in batter, then flash-fried for a crispy exterior, and finally re-chilled and topped with mountains of whip cream and chocolate sauce. Settle in and let the mariachi music wash over you as you try to keep yourself from slipping into a deep food coma. 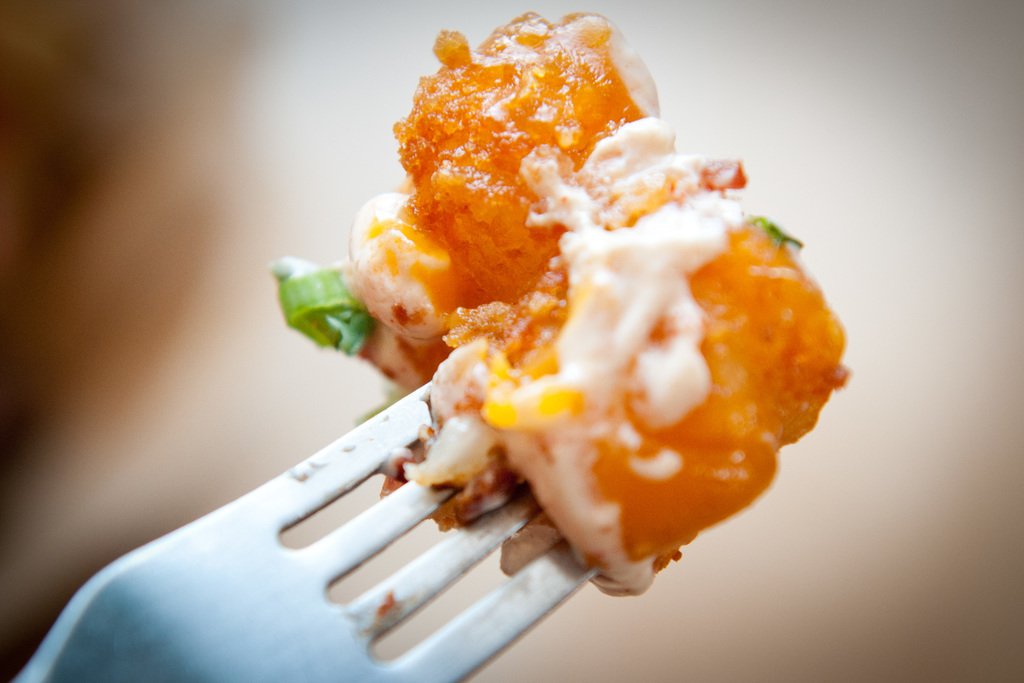 The Low Down: Nostalgic memories can be powerful, especially when it comes to food. But as we grow up many of our childhood favorites fall short. Suddenly, even after several bong hits, you’ll realize those dinosaur chicken nuggets just taste like a sponge. It might seem like a small tragedy but fortunately there are restaurants out there working to remedy this crucial problem. Uber Eats, located in LoHi, has resurrected a loved lunchroom item by dishing out gourmet tater tots. Crispy on the outside but soft on the inside, these tots are flavorful and comforting, without that freezer burn taste. If you want to claim that you’re here for an actual meal, Uber Eats also serves breakfast until 5 p.m. and offers delicious burgers, tacos and sandwiches. But let’s be honest: You’re really here for the tater tots.