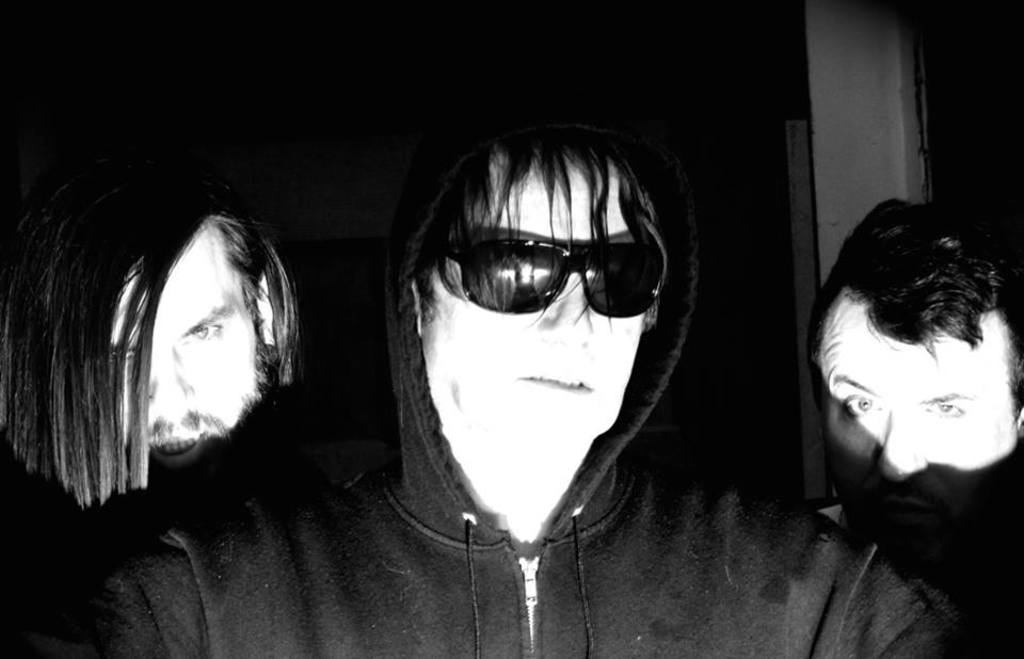 Metal Meltdown: Today is the Day, Kamelot, and More

Summer is officially here and that means tons of good shows, and lots of free time to actually make it out to all of them without using school as an excuse. So revel in the good weather, which has been a long time coming for Colorado, and pick from this impressive list of metal legends and up-and-comers to organize the perfect first week of your summer break. 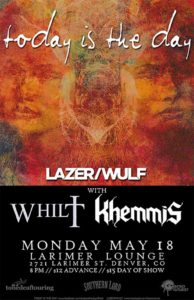 Today is the Day @ Larimer Lounge – Monday, May 18th

Those who have been following extreme metal over the years know that Today is the Day is a force to be reckoned with. The group has been around for years successful keeping things noisy and heavy, while also psychedelic and downright gritty. They will be playing here in Denver at the Larimer Lounge this Monday, alongside Lazer/Wulf, Whilt and local favorites Khemmis. Even better, if you want to win two tickets to see Today is the Day, The Metal Meltdown is doing an exclusive Ticket Giveaway for tomorrow. Simply check out the 303 Twitter for a chance to win, and get on it, because the contest ends at noon!

Despite its relative unpopularity when compared to other subgenres within the vast realm of metal, power metal is still very much alive. Just ask the legendary Kamelot and tour mates Dragonforce on Monday night when they storm the gates of the Ogden Theater and conjure up epic tales of medieval conquest and vivid imagery of dragon slayings in their melodic, shred-tacular and hyperspeed brand of metal. Admittedly, I might be going a little too deep into hyperbole in my descriptions of their music, but seriously, have you ever listened to power metal? It makes one want to hop on a trusty steed and charge headfirst into battle. We may live in an age where chivalry is considered dead, but at least we’ll always have power metal.
Who: Kamelot, Dragonforce
Doors: 8:00 PM

The Moon Room at Summit Music Hall will be laid to waste and the skulls of everyone crushed into dust this Tuesday when deathgrind destroyers Aborted and deathcore bludgeoners Fit For An Autopsy roll through our unsuspecting city on a co-headlining trek. Last year’s The Necrotic Manifesto from Aborted was one of the heaviest, most destructive albums released and this tour marks their first official U.S. stint in support of the album. Aborted are really one of the best bands in the game right now, but they’re merely the bloodied cherry on top of this brutal metal sundae. Fit For An Autopsy, tech death wizards Archspire and melodic death harbingers Dark Sermon will be on this bill, as well as Denver’s own and beloved Vale of Pnath. Bring a hockey mask for this one; you’re going to need it. If you can’t make it to the Moon Room, you can also check them out on Monday at the Black Sheep down in Colorado Springs.
Who: Aborted, Fit For An Autopsy, Archspire, Dark Sermon, Vale of Pnath
Doors: 7:00PM

Ministry @ The Gothic – Saturday, May 23rd

Ministry are an industrial legend and metal gods in their own right, having collaborated and toured with a lot of metal bands and helped to pioneer the sound of extreme music. It’s not very often that they play nowadays, so we are lucky that they are coming to The Gothic this Saturday to put on an awesome show. They will be joined by Laibach and SixxiS. If you’re a Ministry or industrial fan, don’t miss this! 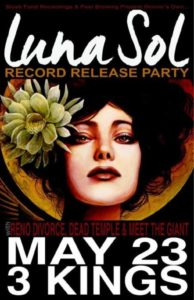 Luna Sol are Denver natives and they have been blowing up recently, with Metal Sucks and a bunch of other big names reviewers giving face time to the release of their new album, Blood Moon. This Saturday, they are celebrating that record and their recent success with a CD release show featuring local badasses Dead Temple and Meet the Giant opening the bill. Don’t miss out and come ready to party. 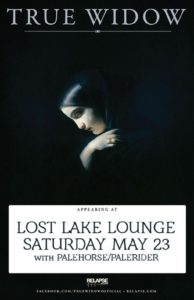 True Widow is a hard band to classify. They play something of a cross between shoegaze and stoner metal, creating a listening experience that is wholly unique. One thing’s for sure though: they’re totally awesome. Lost Lake Lounge will be hosting these introspective Texans this Saturday, with local acts Cloud Catcher and Palehorse/Palerider opening. If you need to just chill out after the long week, this show would be a good one to catch, so be sure to do so!
Who: True Widow, Cloud Catcher, Palehorse/Palerider
Doors: 8:00PM

Cost: $12 in advance/$14 the day of
By Aaron Lambert and Addison Herron-Wheeler
All photos courtesy of event pages or Facebook