In the past couple of years there has been a surge in media surrounding supernatural drama/fantasy… and there is one who has been making his way within this fad, starring in some of fans’ favorite TV series. So, because we can’t get enough of our vampires, werewolves and ghosts (“Oh my!”), 303 Magazine’s Film and TV staff got the exclusive on the very individual who has found his way into this phenomenon… Nathan Parsons. 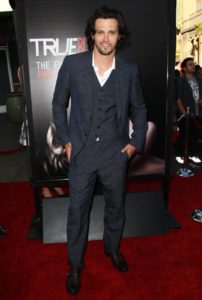 You may know him from his nominated performance as Ethan Lovett on the longest running daytime drama on the West Coast, General Hospital. However, more recently, fans will know him from his role as Jackson on The CW spin-off, The Originals. Or, you may see him as James, the rock n’ roll-er from the 7th and final season of True Blood, which first aired everywhere on Sunday, June 22nd. Despite his busy schedule, between becoming a werewolf for one show and a vampire for the next, as well as his hiking, camping and rock-climbing trips to escape the crazy life, Nathan made time to talk to the Film and TV staff here at Denver’s very own 303 Magazine; giving an exclusive on who he is and his experiences on, as well as off, the set.

Nathan first started acting in school plays during his elementary years. However, the passion did not become serious for him until the young age of ten, when he started professionally working on musicals in Texas, as well as voice-over work for some anime. Despite getting his start at such a young age, Nathan was quite the outdoorsy kid, in-fact, so much so during the younger years of his life, that when he was cast in the soap General Hospital, he didn’t even know what it was. Never-the-less, it became the first major step into a now very busy, acting career.

When asked about his experience on the set of The Originals, Nathan did not hesitate before diving into how much he loves everything:

“It is awesome. Daniel [Gillies] is so great, he is just hilarious. He was such a strong character in the show so it was just hilarious when he would say some of the most ridiculous things on set. I got to get pretty close with Chase Coleman, we both commute back and forth from LA to Atlanta, so we got to hang out in the airports and airplanes together. Phoebe [Tonkin] is so great, and so is Joseph [Morgan]. It was amazing because they have been with the show for so long, it really revolves around them, but on the set they were always excited to work with you or ask what you thought about the scene…. Daniel and Joseph are so great together, they will always say or do little things to each other, it’s almost like they are brothers in real life.”

Q: Like in many vampire/werewolf projects these days, you are involved in a little love triangle, which sadly, you seem to be losing to the well -polished Elijah. Are you gonna fight for your queen or not, Nathan?

A: “Absolutely, that will be a huge thing in season 2. If you’ve seen the finale of the first season you will know Haley has really changed- it’s going to be really interesting to see how that plays out with the werewolves and how that relationship will develop or crumble.”

Fans can be looking forward to season 2 of The Originals to premier around August/September. However, they won’t have to wait that long to see Nathan in one of his latest projects, because season 7 of True Blood aired this last Sunday. Nathan is equally as passionate about his experiences on that set. He describes it like “walking into a family reunion, they are all so close as a cast,” and Nathan had to jump right in. However, he had help from True Blood’s very own star, Stephen Moyer, who directed the first episode of the final season. He talks about how Stephen really took him under his wing and helped him walk into this world  he has had for the past seven years. He also loves his character, James, whom he describes as a “very serene character. He really wants everything to work out for everybody, and really develops into a beautiful character.…” On the set of True Blood, Nathan gets to work closely with an actor with whom our Film and TV staff has gotten to be familiar with, Riley Smith.

When asked how it was to work with Riley, he says:

“It was really great. I had actually first met Riley in a screen test for Deliverance Creek, so on our first day on the set together I was just like ‘hold on, I know you from somewhere!’ He plays my drummer, so we get to have a lot of little moments together, and it was great to get to spend a lot of time with him.” 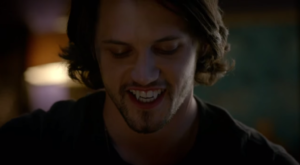 Since this all made up a very crazy and busy last six months for Nathan, he says he doesn’t know what he is going to do with himself when he gets a break. Good thing Nathan loves going back to his home town of Austin, Texas.

“It’s so nice to go back and visit and meet up with my friends. Austin has changed so much, but we can still find these little holes where nothing has changed; where we can go back and hang out, play pool….”

However, these “invigorating” experiences of his acting career prove to be worth it and addictive because he claims he cannot wait to jump back into his work on The Originals.  To be sure, fans are equally as excited for the return of the season, not to mention the bitter-sweet, season finale of HBO’s True Blood. So TUNE IN for all of the exhilarating, supernatural projects that Nathan has coming up!

Also, for all the Nathan-lovers out there, here is a fun fact to put in your scrapbooks! Nathan Parsons’ favorite color is green…. Because in all the complexities in his life as an actor, Film and TV staff thought it might be nice to get back down to some of the basics….