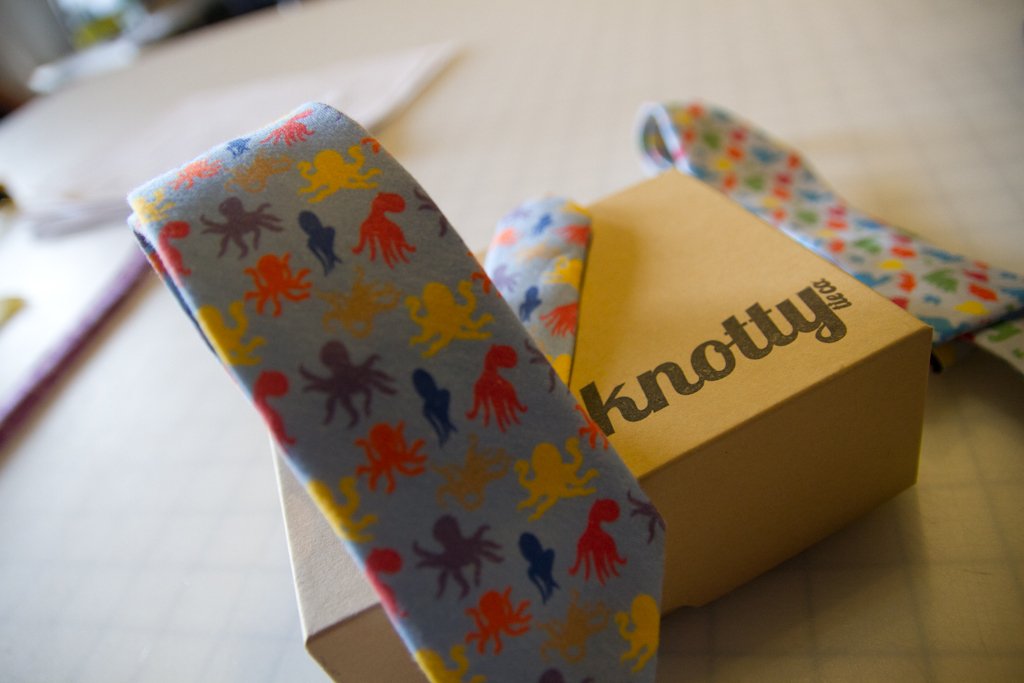 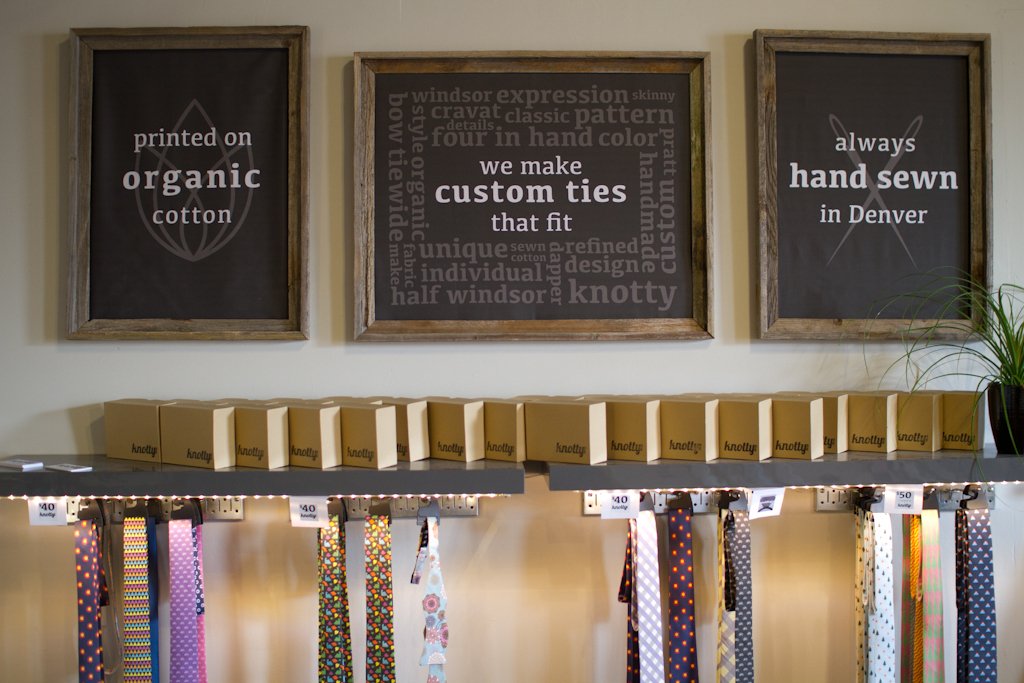 All photos by Brent Andeck

In 2012, a couple of students at Metro State University devised the ultimate remedy for a quarter-life crisis: They decided to stop waiting around for proverbial “chance of a lifetime,” and instead created their own.

Armed with a considerable amount of confidence, hard work and dedication, the two college friends launched Knotty Tie, a web-based menswear business that focused on customizable neckwear. It was new, profitable and, above all, something they would enjoy calling work. 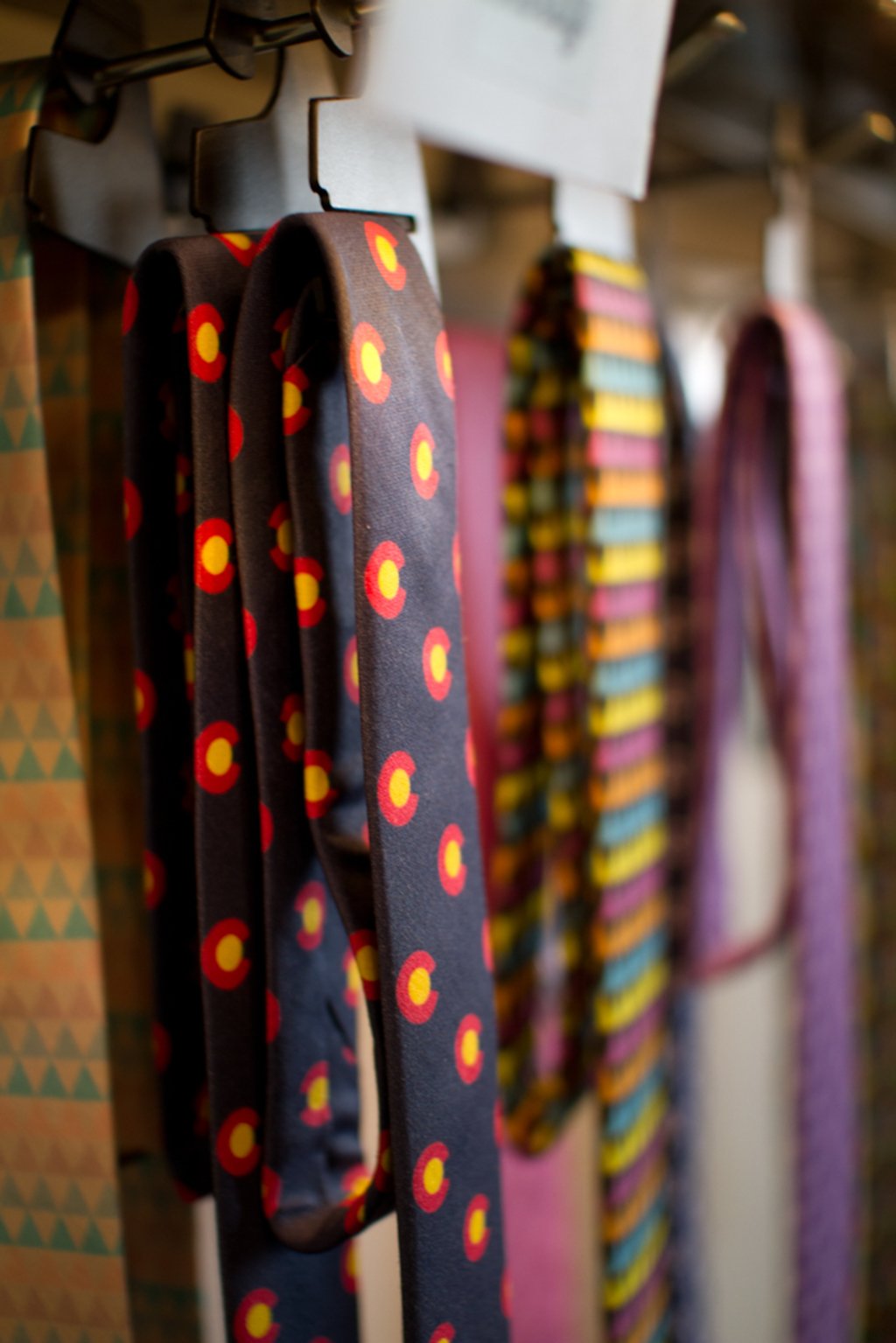 “We were really frustrated with where we were when we first thought of the business,” says Mark Johnson, co-founder of Knotty Tie. “I wasn’t really liking school, and my business partner Jeremy [Priest] wasn’t liking his job prospects, so we wanted to create this opportunity for ourselves. And then we wanted to extend that opportunity to some of our friends— friends who were just as dissatisfied with their jobs as we were.”

Inspired by the desire to create something with their own hands, Johnson and Priest were immediately attracted to the art of tie-making, but they wanted to add a wrinkle to the craft; they decided they’d offer customizable features to transform these otherwise meaningless objects into something unique and personable for their customers. So they built a website and taught themselves to sew.

“We didn’t really know what we were doing at all,” Johnson says. “Neither Jeremy nor I had sewn before we started doing this, so we taught ourselves by tearing apart about 50 different ties and then trying to put them back together […] We just kind of tackled something we thought we could learn — something different, something we would enjoy learning.”

Propelled by a highly successful fundraising campaign in 2013, Knotty Tie experienced impressive growth within its inaugural year by offering pre-sale items and package deals through the crowd-funding site KickStarter.

Initially, Johnson and Priest set out a goal of raising $5,000 through the program, but were pleasantly surprised when their project raked in about $23,000. It was exciting, but somewhat overwhelming for a two-man operation.
“We were working in [Priest’s] apartment at first,” Johnson says. “By the end of the campaign, there were about 738 ties that we were going to have to produce in order to fulfill the KickStarter rewards. We knew it was going to be a lot of work—work that required more space.” 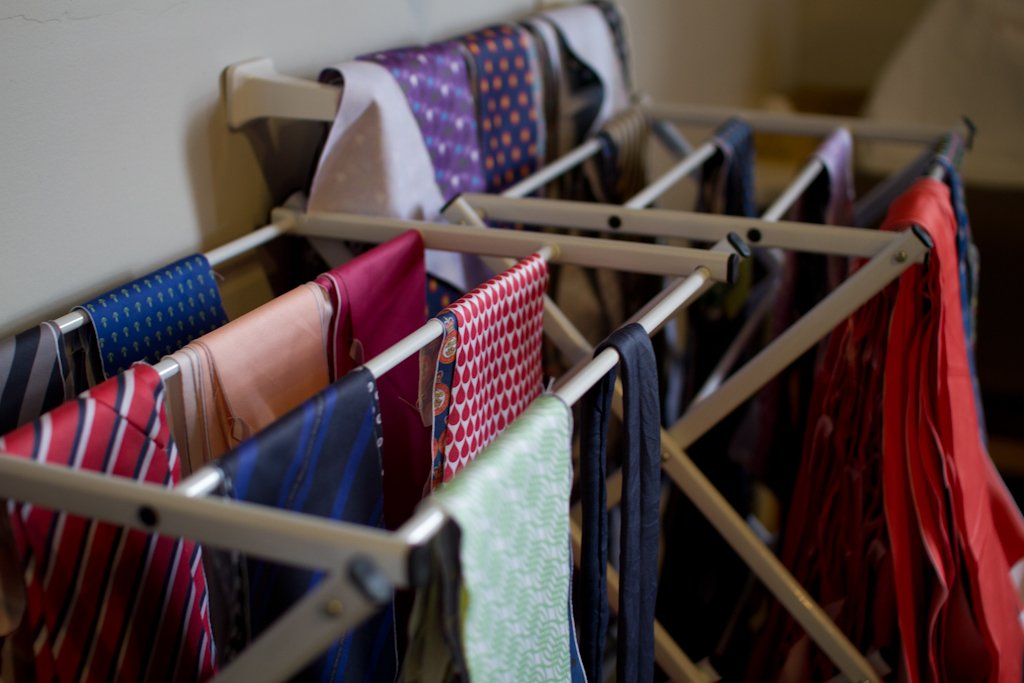 Fast-forward to the summer of 2013, when Knotty Tie set up its first official work studio in Denver’s Santa Fe Arts District. It is here that the Knotty Tie team produces organic, handmade ties, bow ties and pocket squares for its international clientele.
“Since the KickStarter campaign, we have shipped to over 20 different countries,” Johnson says. “It speaks to how unique our business is. It’s a service not many people can find locally, yet it’s a service that is very flexible.”

Whether it’s producing accessories for a wedding party, or designing a set of ties that displays a company’s logo in the pattern, Knotty Tie is having no trouble finding a diverse customer base with varying needs. Perhaps it’s a reflection of the current state of menswear — a response to the Casual Friday culture — but there’s this noticeable influx of men reincorporating dapper staples into their everyday wardrobe. 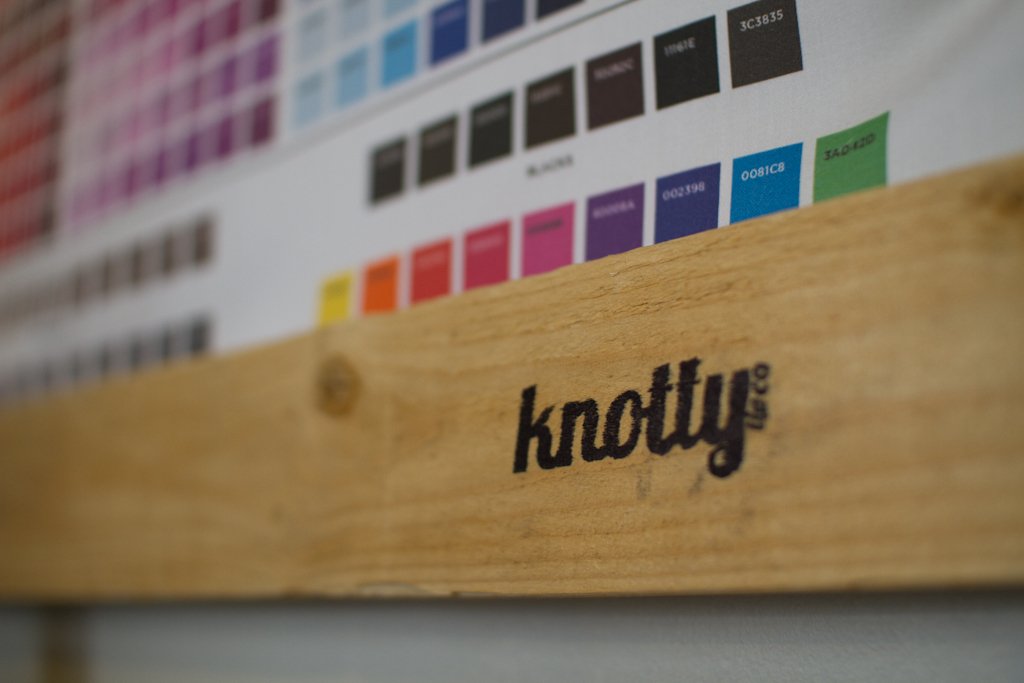 “Our generation is starting to appreciate looking your best again,” Johnson says. “Ties, bow ties, pocket squares, they’re not necessarily for formal occasions anymore. We offer people the opportunity to really express themselves through something that is somewhat of a forgotten item. Also, if you’re in a corporate job that requires a tie, there’s not a lot of opportunities to express yourself; but with these, you can show a little self expression while looking your best.”

Currently, all production for Knotty Tie items takes place in-house, with exception to the actual printing of the fabrics; however, everything from the design, to the sewing, to the packaging occurs in the Arts District work studio. 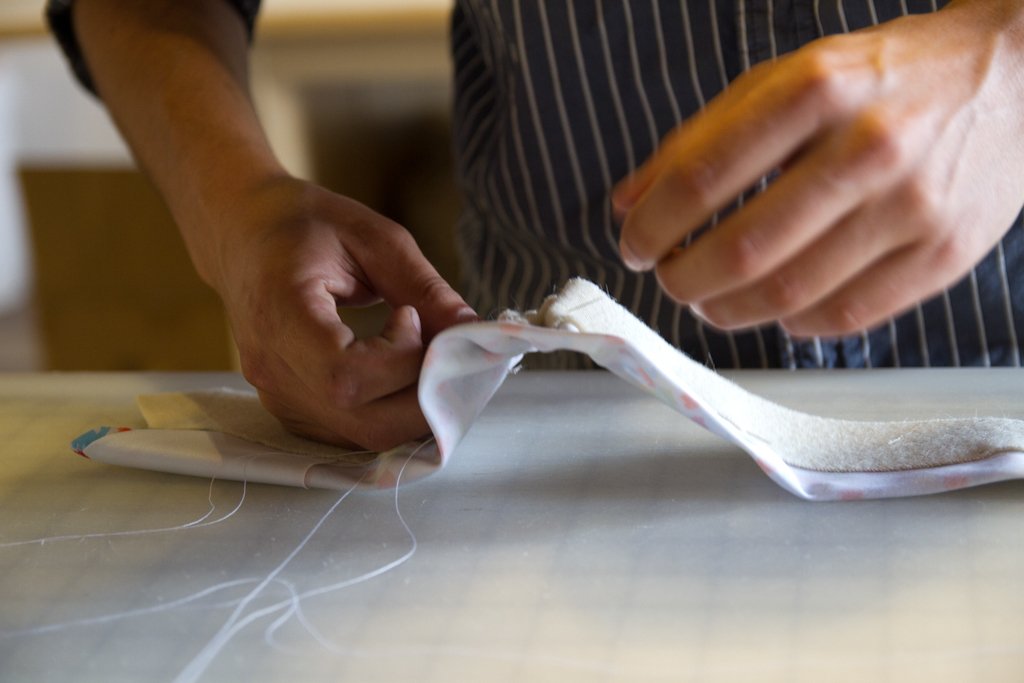 Johnson admits that it’s still a lot of work (typically 12-hour days) to produce their products, but as the business grows, so does the Knotty Tie team. About a week prior the interview with 303 Magazine, the company hired additional tailors through a program that resettles refugees by pairing them with companies that allow them to use their acquired knowledge and skills.

“Like I said, it’s all about creating opportunities, not just for ourselves,” Johnson says. “We want the best possible team to make sure we make everyone happy with the services we offer. The human touch that we offer sets us apart from all those other customizable necktie sites.” 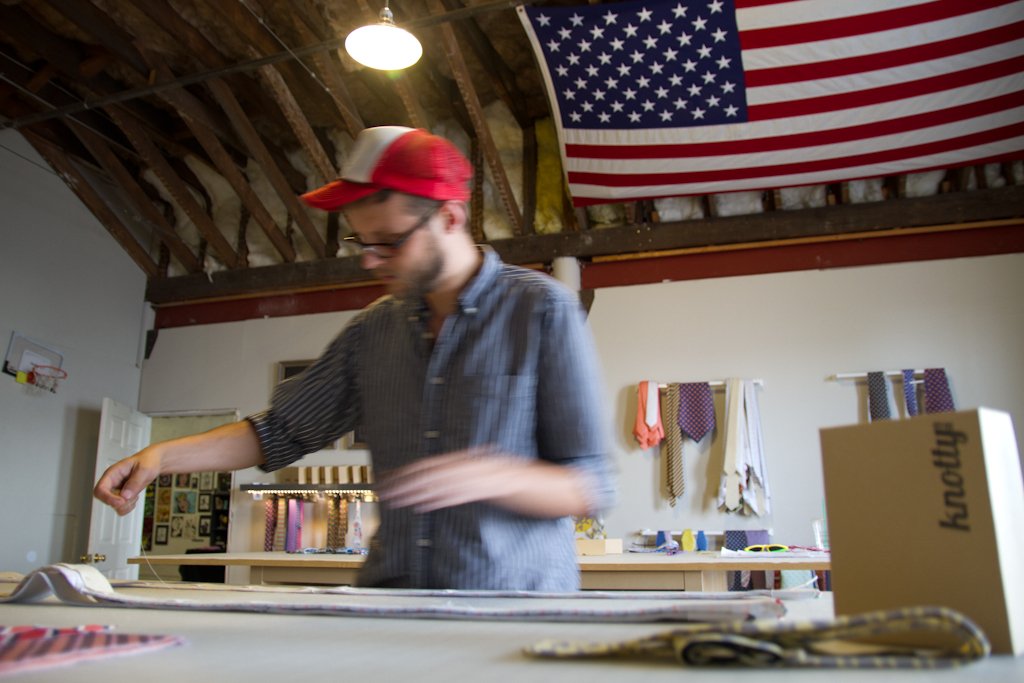 To learn more about Knotty Tie and the services it offers, go to www.knottytie.com.