Snowball rocked the lot at Sports Authority Field in Denver this past weekend. The music was great. The visual art was exceptional. Twenty-two of the best artists in the Mile High City came out in a big way for a live street-art painting event organized by Jonathan Lamb of Like Minded Productions. Each wooden panel is Snowball themed yet through a different artists perspective. Together, they represent a truly stunning visceral Colorado experience. 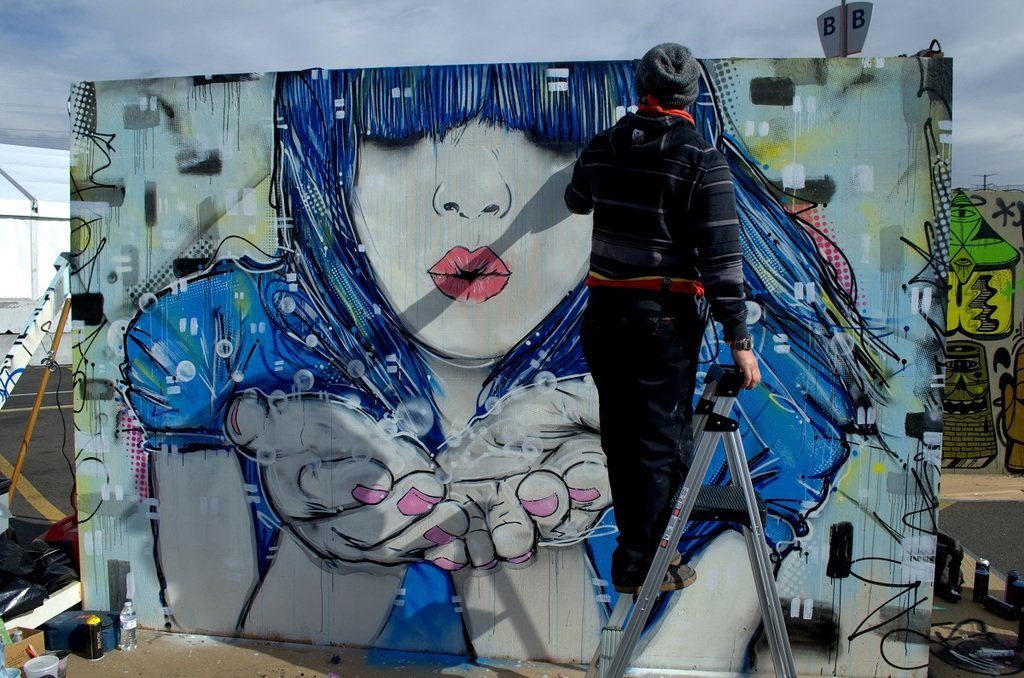 Michael Ortiz is one half of the badass local artists initiative Like Minded Productions. His jaw-dropping Snowball portrait was an unbelievable attention piece. She is so feminine and whimsical, she fit right in. Follow Ortiz on Instagram and prepare to be impressed with his raw, artistic talent.

The other half of Like Minded Productions artist Jonathan Lamb came out in a big way to represent at Snowball. His urban contemporary art lines the alleyways in the Larimer Art District, a favorite on Concrete Canvas. Lamb also organized the entire event, getting all of these amazing artists on board as well as getting approval for the live painting. His graffuturistic style pops off as much as his ambition. This is the man.

Jaime Molina invited his unique and insanely cool Cuttys to the amazing three-day festival. Jaime is one of 303 Magazine’s favorite local artists, one whose creativity is not limited by modes or by mindsets. He often works with wood, three-dimensional pieces, and even moving, complex interactive artwork. Fellow artist and one third of Palabros Pedro Barrios helped put some finishing touches on the piece. Both are the best in the city. Jaime Molina will be having a show on Saturday July 12th at Svper Ordinary, Barrios’s fresh new gallery inside The Source.

Andrew Hoffman has been blowing up in the Denver art scene. His style is unapologetic, and his Snowball mural is no exception. It’s a history lesson on Denver and an homage to it’s founding in 1876. Hoffman juxtaposes the modern with the classic. It is minimalism done perfectly, with a shot of avant-garde on the side. Watch out for Andrew Hoffman and follow him on Instagram to gaze through his unique artistic point of view.

Pat Milbery and David Sheets of Sognar at Snowball 2014, photo by Lindsey Bartlett.

Sognar Official is an ambitious group of artists, snowboarders, musicians, photographers, and all around badasses. Pat Milbery and David Sheets collaborated on this insane Snowball creature with high energy and a truly wild color palette. This mural ended up being one of the most popular of the week on social media. 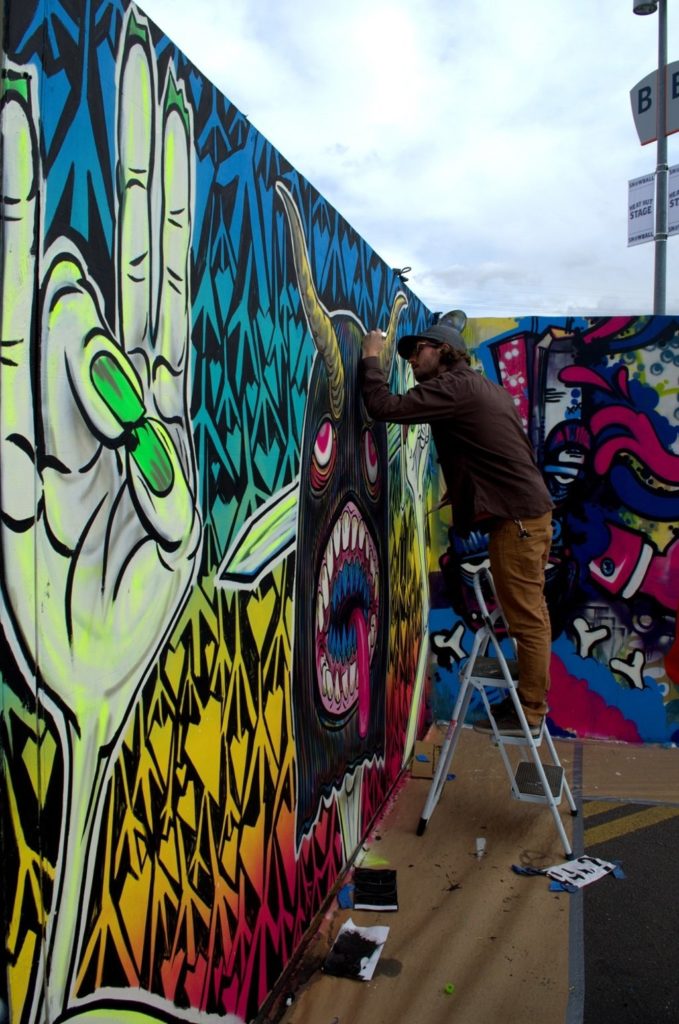 David Sheets of Sognar at Snowball 2014, photo by Lindsey Bartlett.

Sognar is always doing something amazing in the city they love. Look for shows, murals, events, and future coverage from 303 Magazine.

Dread is the godfather of Denver street-art. He is the creator of Colorado Crush, the cities largest street-art event that happens in the Larimer Art district every Summer, as well as a long running influence on the local scene. Dread has some amazing work all over Denver, including on the side of Black Sky brewery. There will be an announcement on Concrete Canvas for the date of Dread’s 2014 Colorado Crush event. This event was started by Dread but in his own words, it truly belongs to the city, to the artists, and to all those who enjoy the massive paintings and masterpieces that come from it. 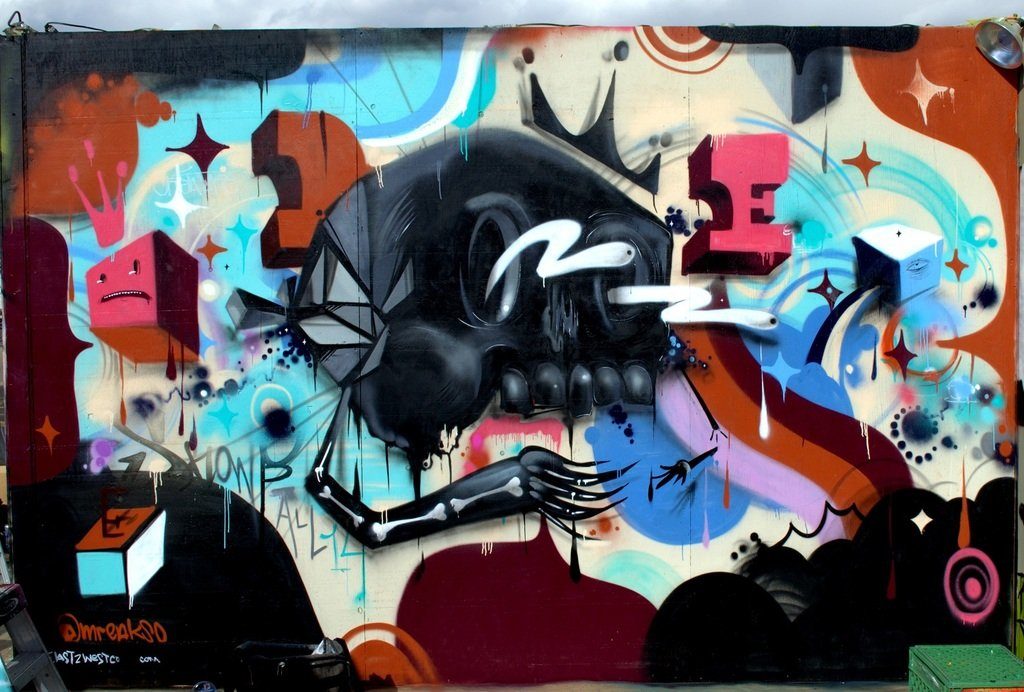 Michael aka Mreakso creates a mind blowing mural every time he picks up a paint can. The three-dimensional elements are enough to take your breathe away. A personal favorite piece was done as a collaboration by Mreakso with Saten in the Santa Fe Art District. Follow Mreakso on Instagram and stay up with all of the newest, biggest, baddest pieces he creates in Denver! 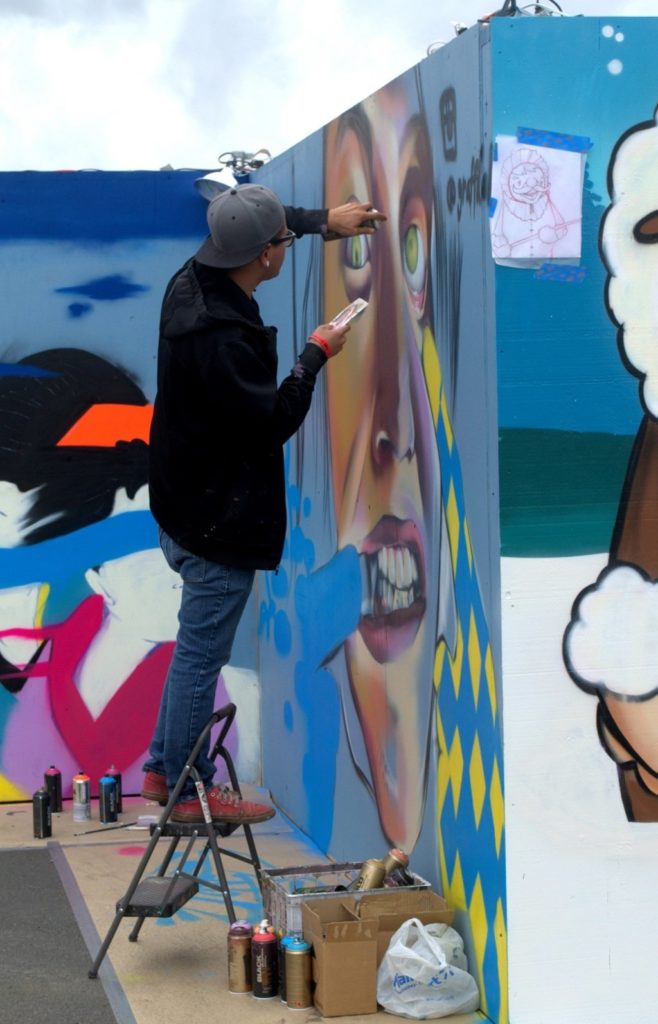 Saten aka Leo Rivera is another popular Denver portraitist. When he isn’t painting all over the city, he’s finding photos from his friends (in this case, his cousin) to use as inspiration for his next mural. Follow him on Instagram. 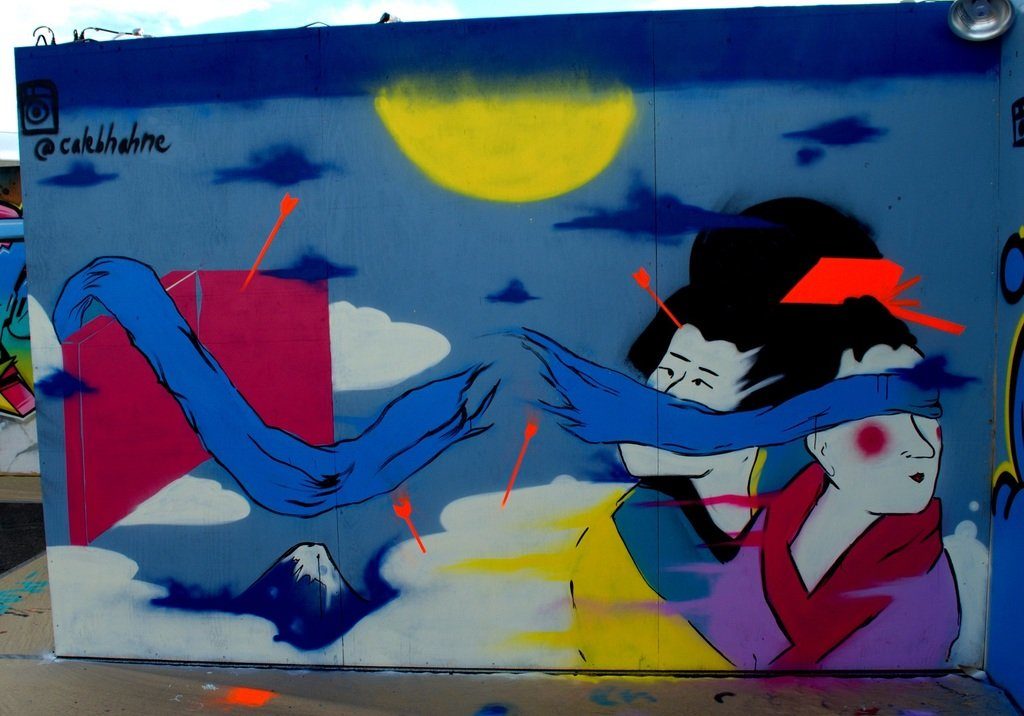 Young new artist Caleb Hahne has been making serious waves in the scene this year. Hahne has an upcoming show at Soze Gallery in Los Angelos, plus just finished an amazing gallery showing at Svper Ordinary in The Source. Hahne is on the come up, keep your eyes peeled for his work around the city. 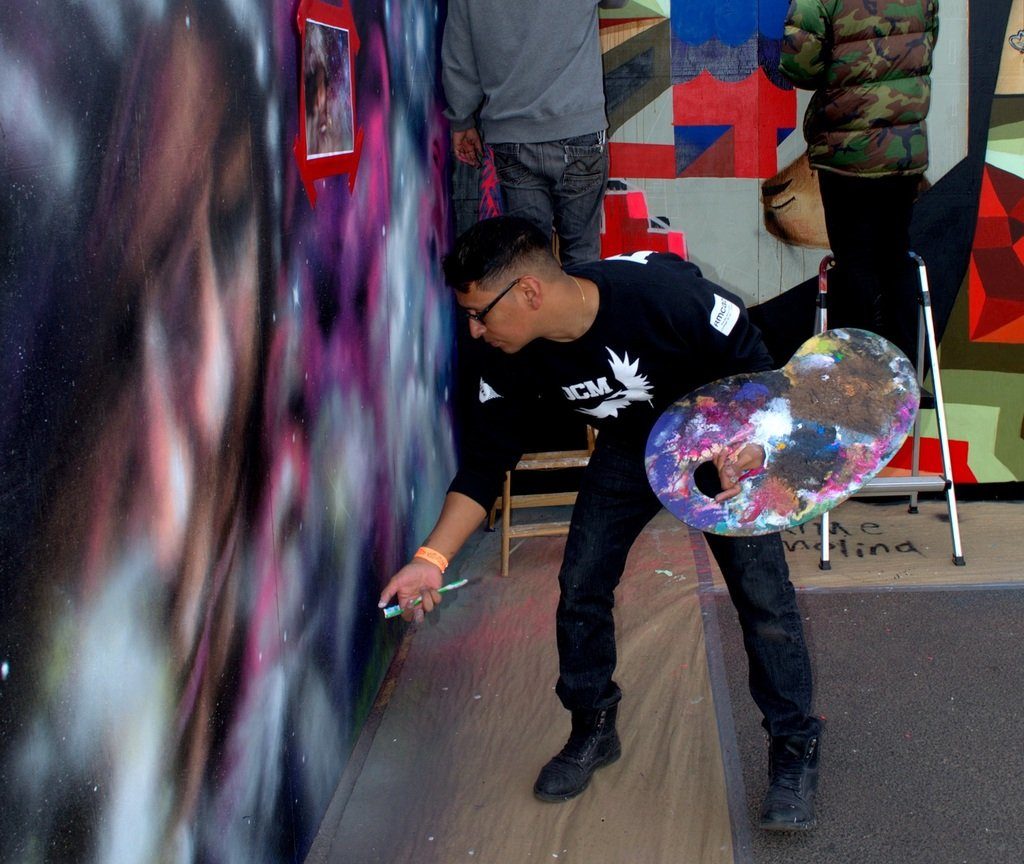 Daniel Chavez working on his mural at Snowball 2014, photo by Lindsey Bartlett.

Daniel Chavez, much like the rest of the 22 talented artists, absolutely killed it at Snowball 2014. He is another amazing Denver portraitist who incorporates elements of the surreal. Chavez is known for blending the lines between what is real and what is fantasy. There were many festival passers-by who were tripping out (hopefully not literally) to the surrealist and fast movement in his portrait. Absolutely killer. Check out Daniel Chavez’s murals in town and on 303 Magazine to get your Denver artist fix. 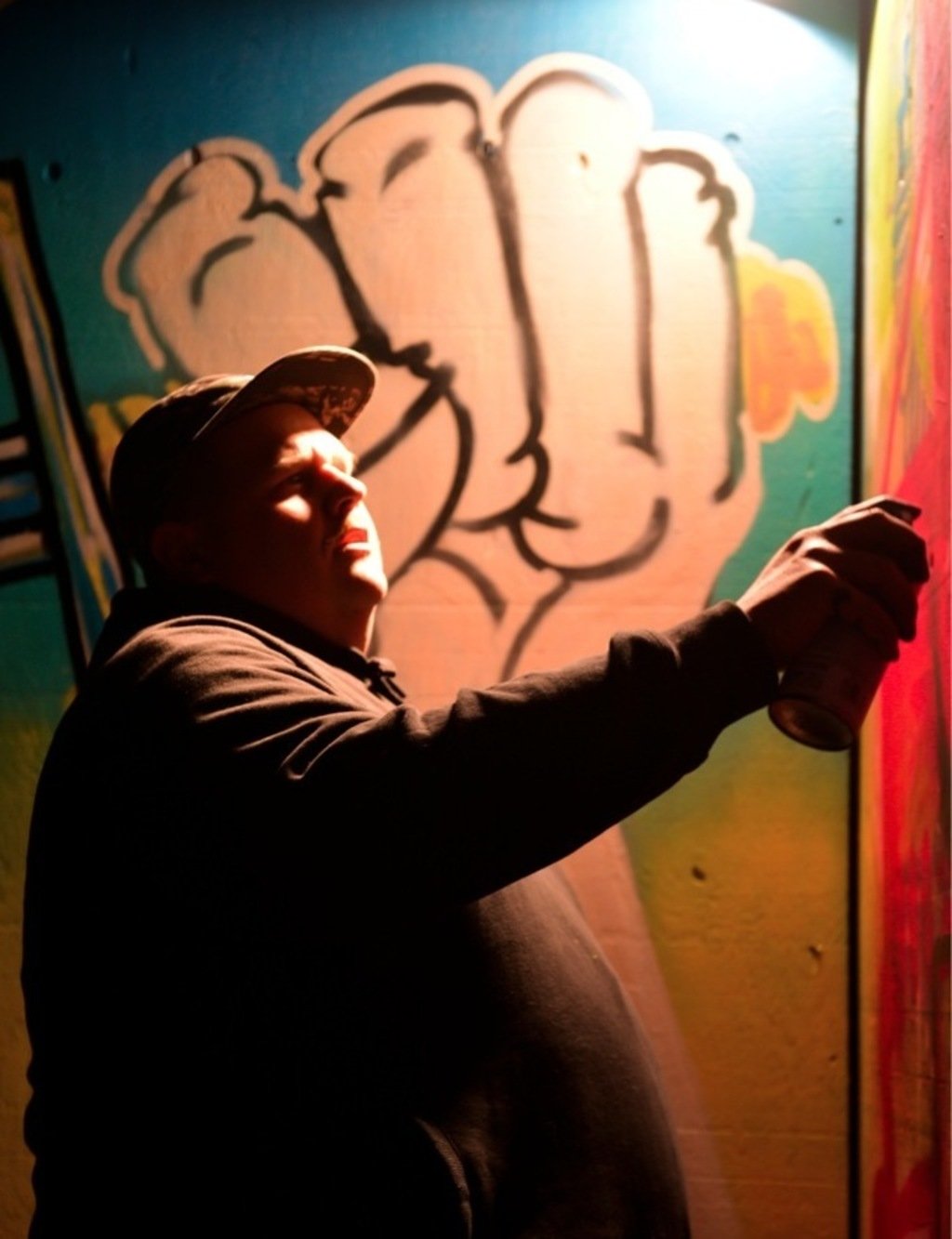 Berk Visual is a 303 Magazine regular and deservedly so. He is used praise for his collaborative murals all over town with friends and fellow artists Plaant and 84 pages. Follow Berk Visual on Instagram. This stunning photo was taken by 303 Magazine photographer Adam Ripplinger on Night 1 of Snowball. See the full gallery here.

Paul Michel aka Mountain Versus Plains 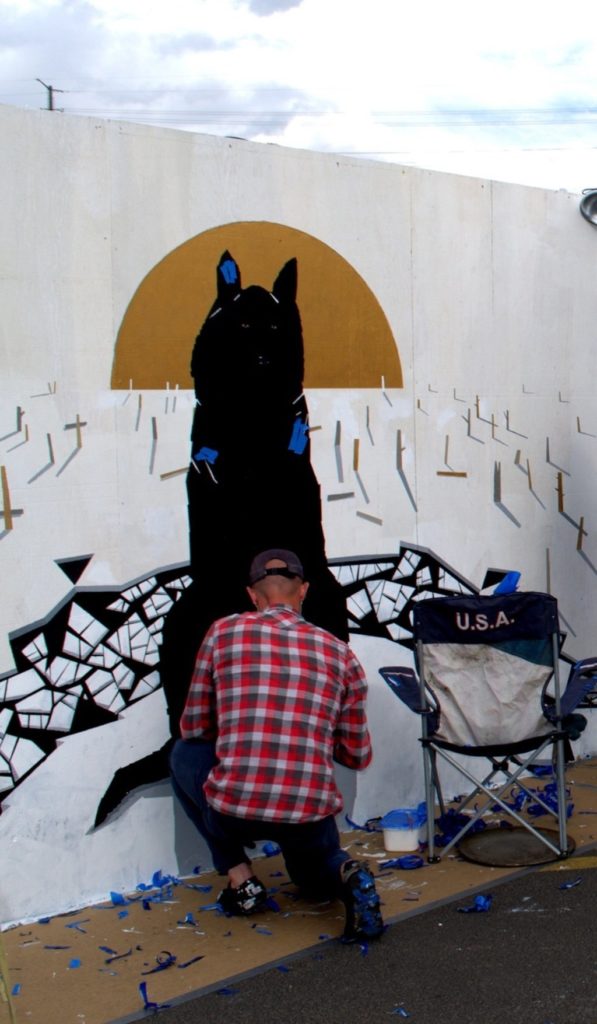 Mountain Versus Plains at Snowball 2014, photo by Lindsey Bartlett.

Mountain versus Plains has been adding a touch of eerie, existential yet accessible work to the Mile High City. Head of the collective, artist Paul Michel is a perfectionist in detail and in technique. Follow Mountain and Plains work and look out for more from this amazing artist in the summer season. 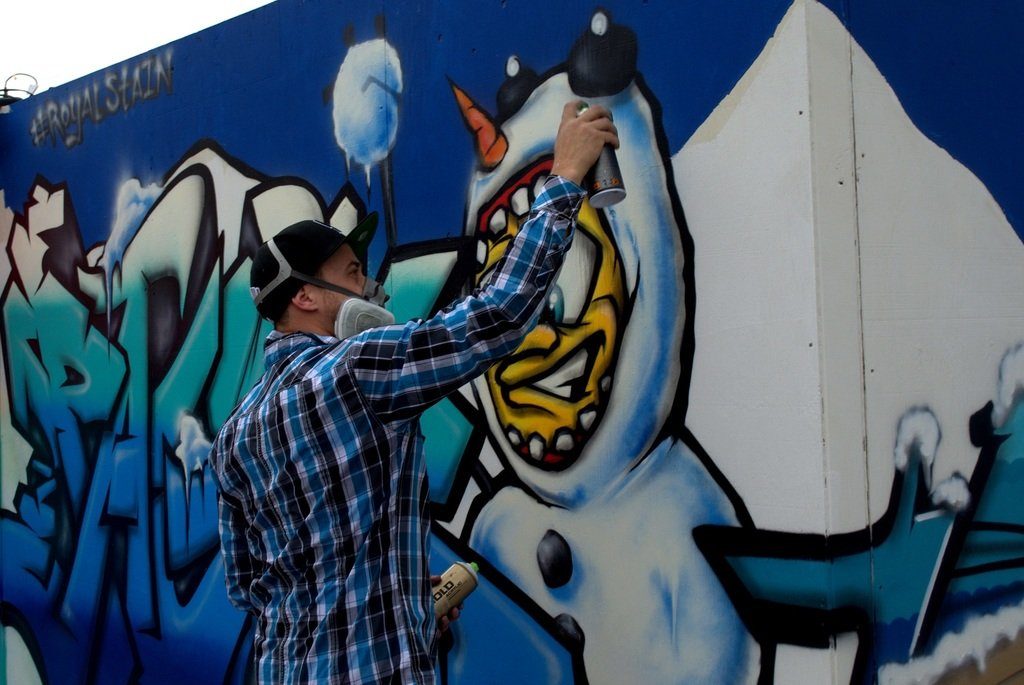 Royal Stain aka Tristan at work on his mural for Snowball 2014, photo by Lindsey Bartlett.

It’s no surprise that the X-Men Krew showed up to paint at the amazing Snowball event. This entire piece is three panel collaborative mural created by Chris Haven, Tristan Mintan aka Royal Stain, and Nice Beats. It has all the movement, color, and excitement that you expect from each of the artists. Their styles blend seamlessly.

Mario Zoots created this ill piece this weekend in his bizarre, bricolage, layered, and absolutely unreal style. I love how each element in the painting pops off the wooden panel. I am tempted to reach out and grab. Zoots style is echoed in much of his work, reminding me of a former brilliant mural that has since been painted over. Enjoy this throwback by Zoots, Kevin Hennessy and Ryan Ingersol and cross your fingers for another exciting collaboration soon. 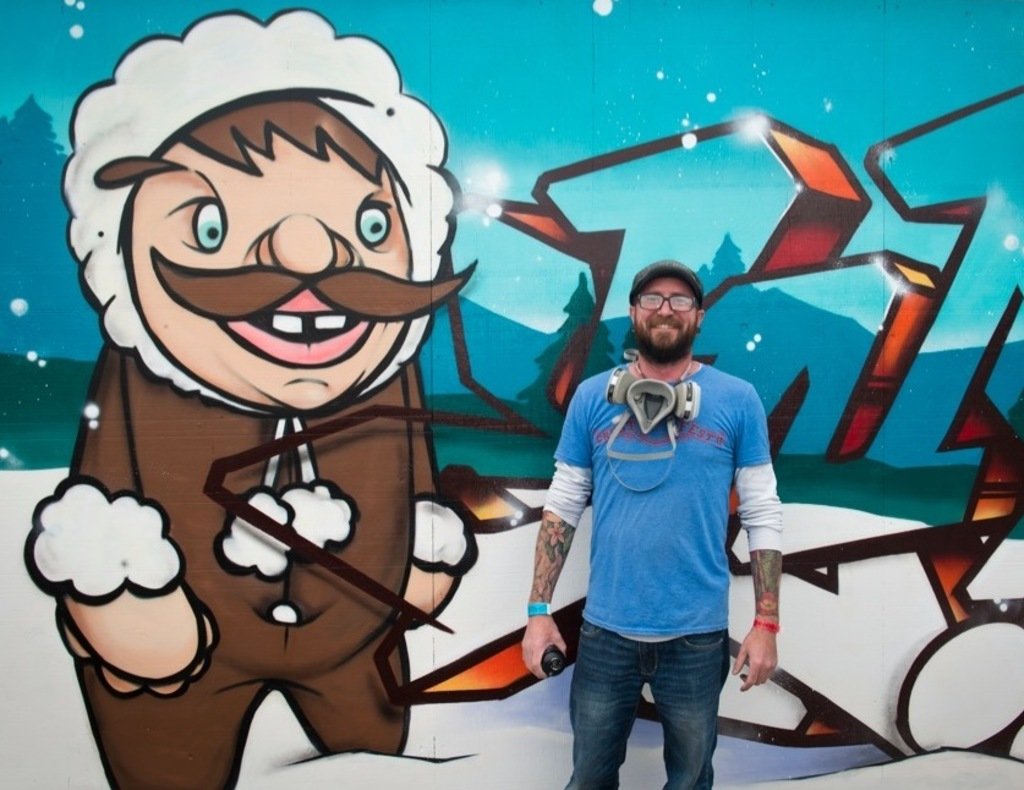 Mike Graves is another really well known artist in the Denver scene. The characters and personality in Grave’s work are his signature. This ice cold collaborative piece painted with EMIT absolutely popped off. Follow Mike Graves and EMIT on Instagram and look for more amazing work from the duo this season!

This is the first time I’ve seen a piece by artist Ersquetzal (that I was aware of) and I was totally blown away by the energy of his mural and by his overwhelming talent. Follow @Erosquetzal on Instagram! 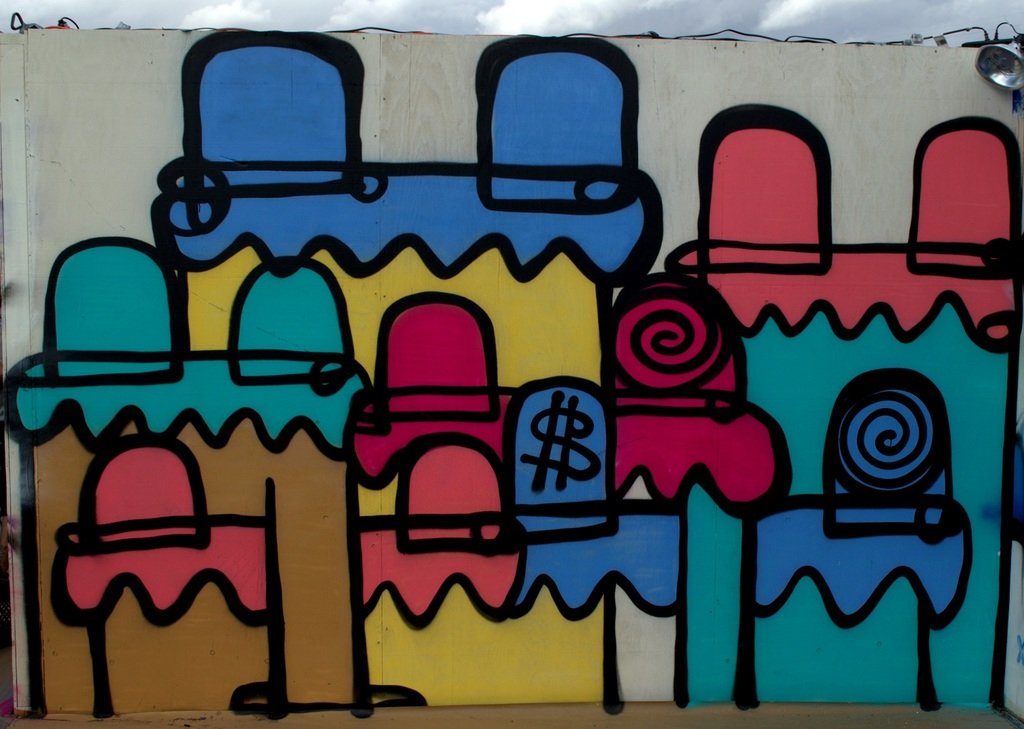 Last but certainly not least, we have this amazingly colorful and vibrant mural by underground graffiti artist and outlaw Dinar. Too elusive for Instagram, you’ll have to wait and see what colorful concoctions Dinar will think of next!

Stay tuned to Concrete Canvas on 303 Magazine for more amazing, local street-art all year long! See even more photos in our galleries from Snowball 2014. 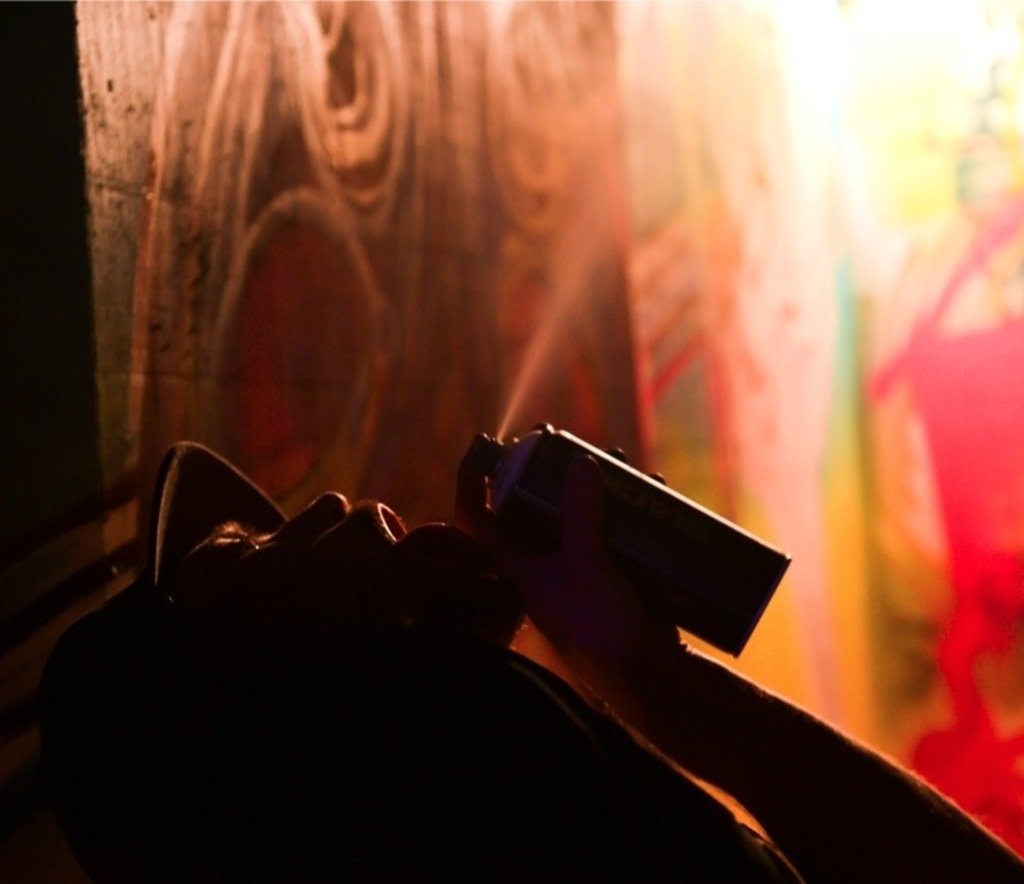