It’s relatively rare for an introvert to thrust themself into the spotlight where they’ll hold the full attention of the room. It’s even less common for an introvert to find themself center stage, at a world-class music venue, baring their heart for thousands of adoring strangers. But despite how unlikely of an occurrence it is, it still happens — and if you’re lucky enough to be present for one of those nights, then you’ll get to experience a vulnerability from the artists who bravely put themselves on display for the sake of their art and their fans. On Tuesday night, fans in attendance at Red Rocks were treated to exactly that type of special experience when Phoebe Bridgers brought her sold-out “Reunion Tour” to the Ampitheatre for her biggest show to date. 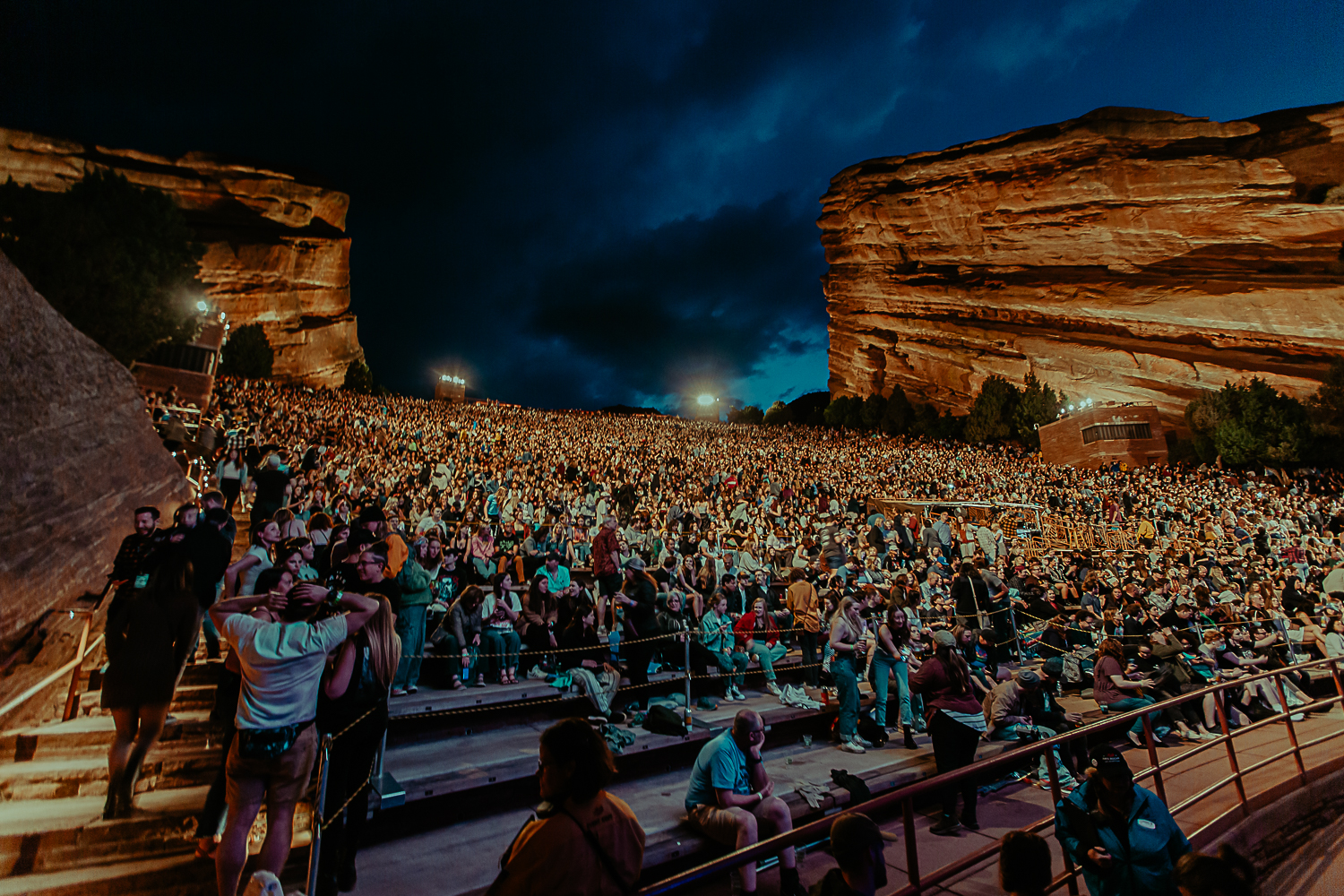 Fans turned out in droves to see the four-time Grammy nominee, showing up well before doors even opened to find a good seat. But before that happened, many concert-goers discovered that their hike to the rocks wouldn’t be quite as direct as they originally anticipated, finding themselves drawn to merch lines in parking lots outside the venue where they could conveniently pick up their t-shirts, totes and event posters while they finished the last of their beer, seltzer or whatever else they brought for a pre-show aperitif.

But once ticketholders made their way inside they quickly found their way to the Red Rocks steps where their hunt for the perfect vantage point began. By the time the night’s opener, Sloppy Jane, took the stage, the lower general admission section of the amphitheatre was packed with fans squishing together in preparation for the night’s main attraction. 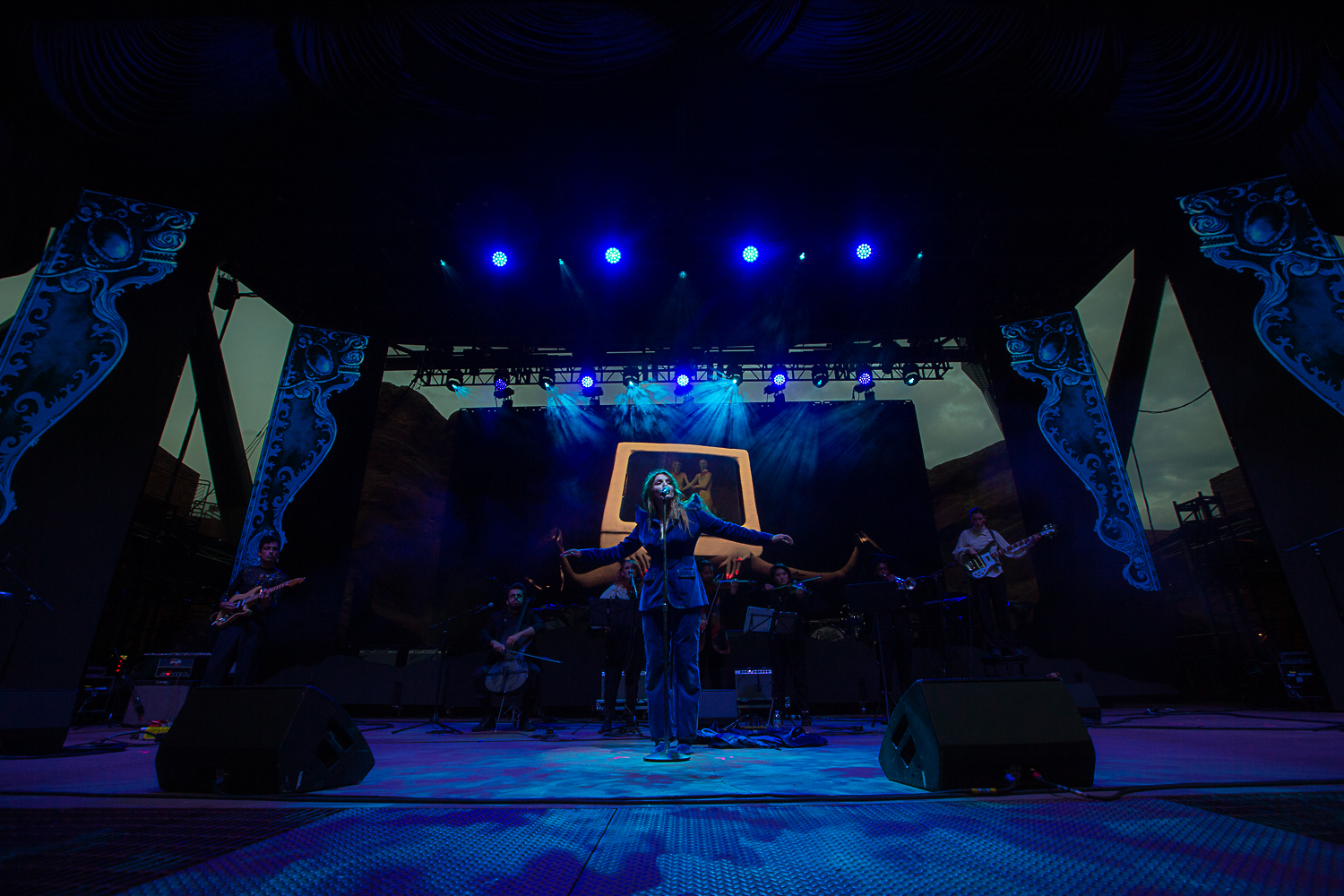 Unfortunately for Sloppy Jane, a sizable number of the night’s early arrivals didn’t appear to be interested in the opening set — likely not realizing that they were bearing witness to a band that the night’s headliner helped form more than a decade ago. Those who irreverently talked through the set missed out on the soft and lilting vocals of frontwoman Haley Dahl, who expertly led the orchestra behind her on stage through the set. Stringed instrumentation added intricate layers to the music while Dahl’s exuberant performance vied for the audience’s adoration.

Midway through the set, fans began to warm up to Sloppy Jane, though some in attendance could still be heard lamenting the political nature of the lyrics. However, as Dahl began to slowly remove layers she finally captivated the attention of the venue, dressing down to a skin-tight, lace jumpsuit as the crowd cheered. Throughout the rest of the set, the audience’s engagement slowly grew, reaching its zenith when the band covered My Chemical Romance’s “Cancer.” 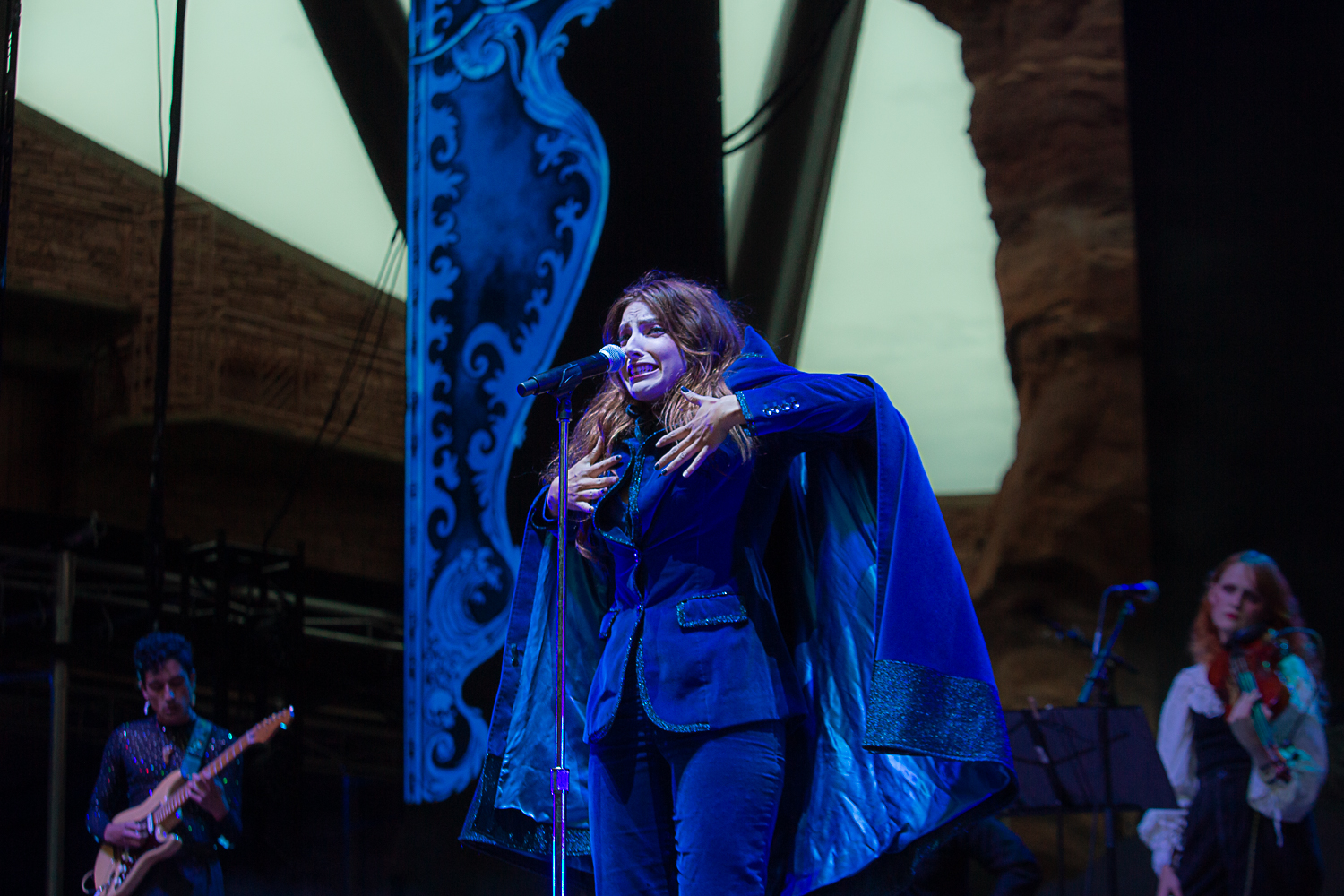 After concluding their set with a countdown to the “Happy New Year” from the penultimate track on the current album, Madison, Sloppy Jane exited the stage, leaving Dahl alone to finish bidding the audience farewell for the evening. “Do you know what’s next?” she asked, and Red Rocks’ answer was resounding: Phoebe!

As the sun set, a slight chill began to creep into Red Rocks as the clouds overhead loomed. The lightest sprinkles of rain began to gently fall while fans waited for the set change. However, as the night wore on, it became clear that mother nature would hold back, only occasionally kissing audience members with drops of rain sporadically throughout the show. 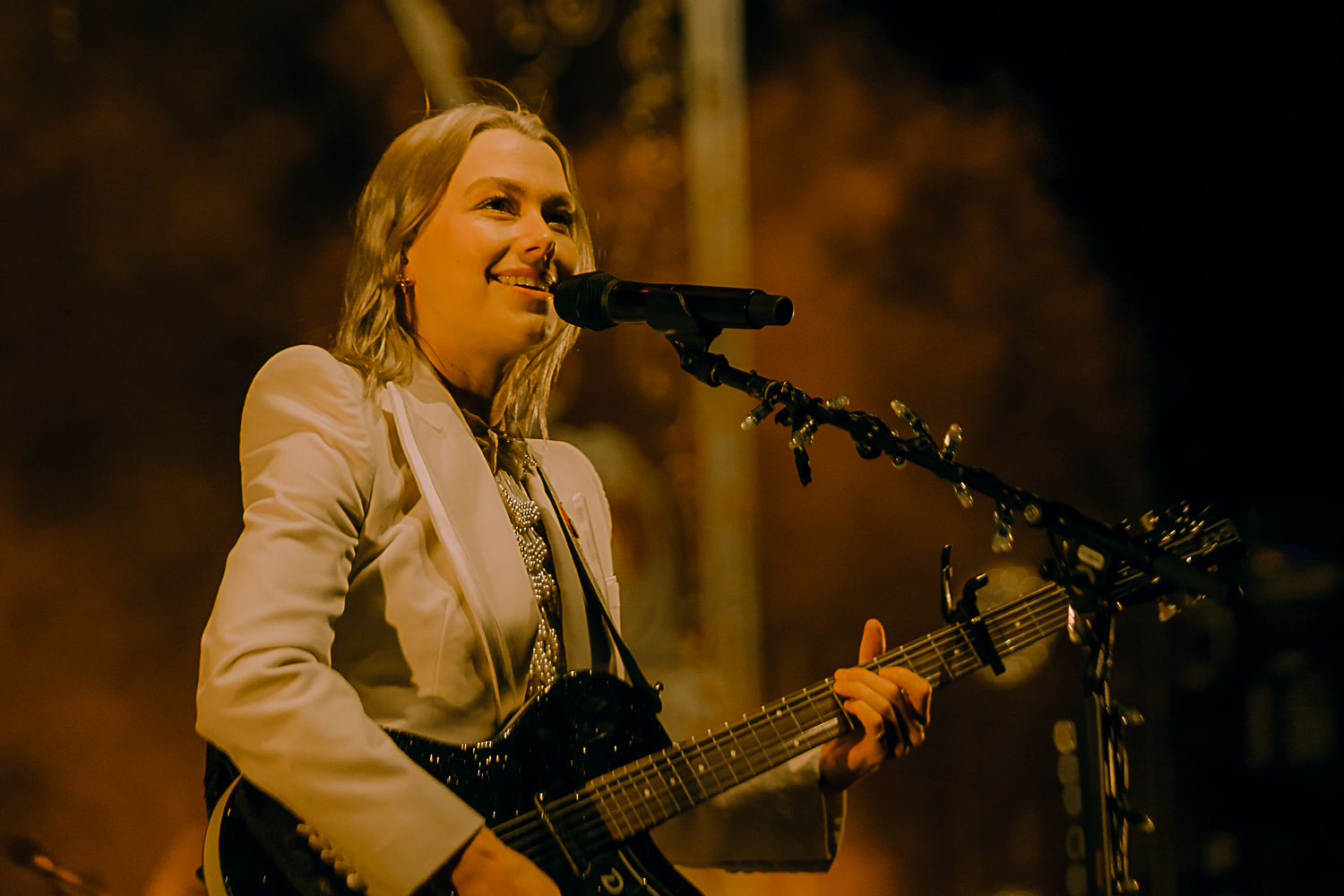 Then, as the lights shut off signaling the start of something special, the distinctive notes of Disturbed’s “Down With The Sickness” rang out over the ampitheatre, eliciting cheers and wild screams from the audience. The skeleton-clad band made its way on stage, finding their places in the dim lighting before finally, Phoebe Bridgers emerged from the darkness. Dressed in a sharp white suit, she found her way to the center of the stage and began the show with one of her most popular songs, “Motion Sickness.”

Easing through the first few songs of the set, Bridgers shined on stage, and with each new song, fans rushed to open their cameras to preserve their memory. Her performance displayed the authentic talent that earned her a devoted fanbase, proving that her prowess is anything but the result of a recording studio trick. However, it wasn’t long before the nerves got to the star. “I’m nervous so I fucked up the words,” Bridgers apologized to the audience after her performance of “Kyoto,” before going on to confess in bewilderment that the night’s sold-out performance was her biggest show to date. 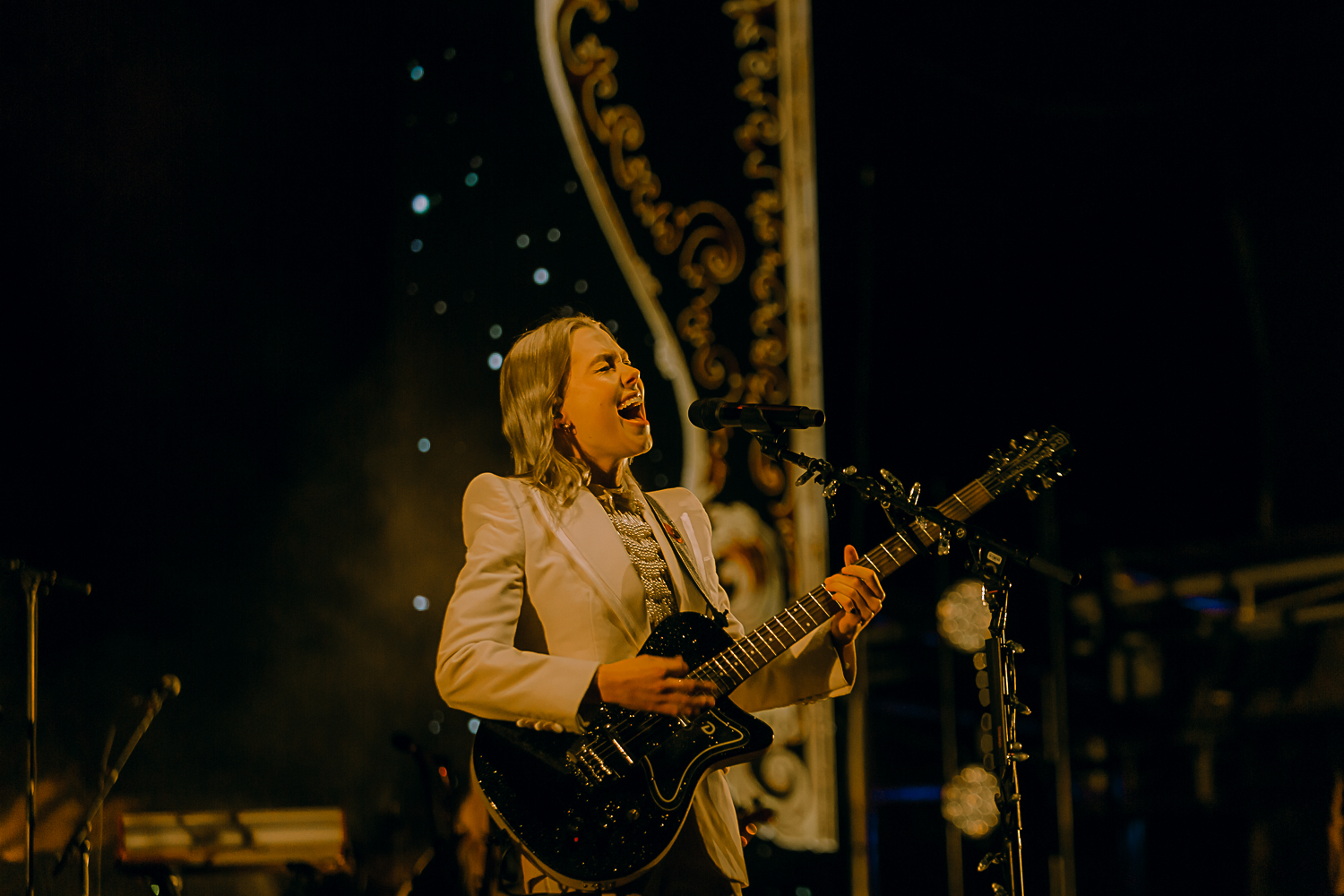 Stars twinkled and danced on the screens behind the stage as she sang, occasionally making way for a pop-up storybook graphic that told the tale of the evening. With curtains draping across the stage to set the scene, the soft-spoken artist progressed through much of the rest of the set with little embellishment. Instead, she let the music take center stage, choosing her words carefully and allowing her fans to know and love her through her songs. And that’s exactly what Red Rocks did.

Midway through the evening, as the music slowed and a hush fell over the audience, one fan seized their chance, yelling “I love you Phoebe!” Miraculously, their voice carried through the venue, eliciting surprised chuckles and cheers of agreement from other concert-goers. 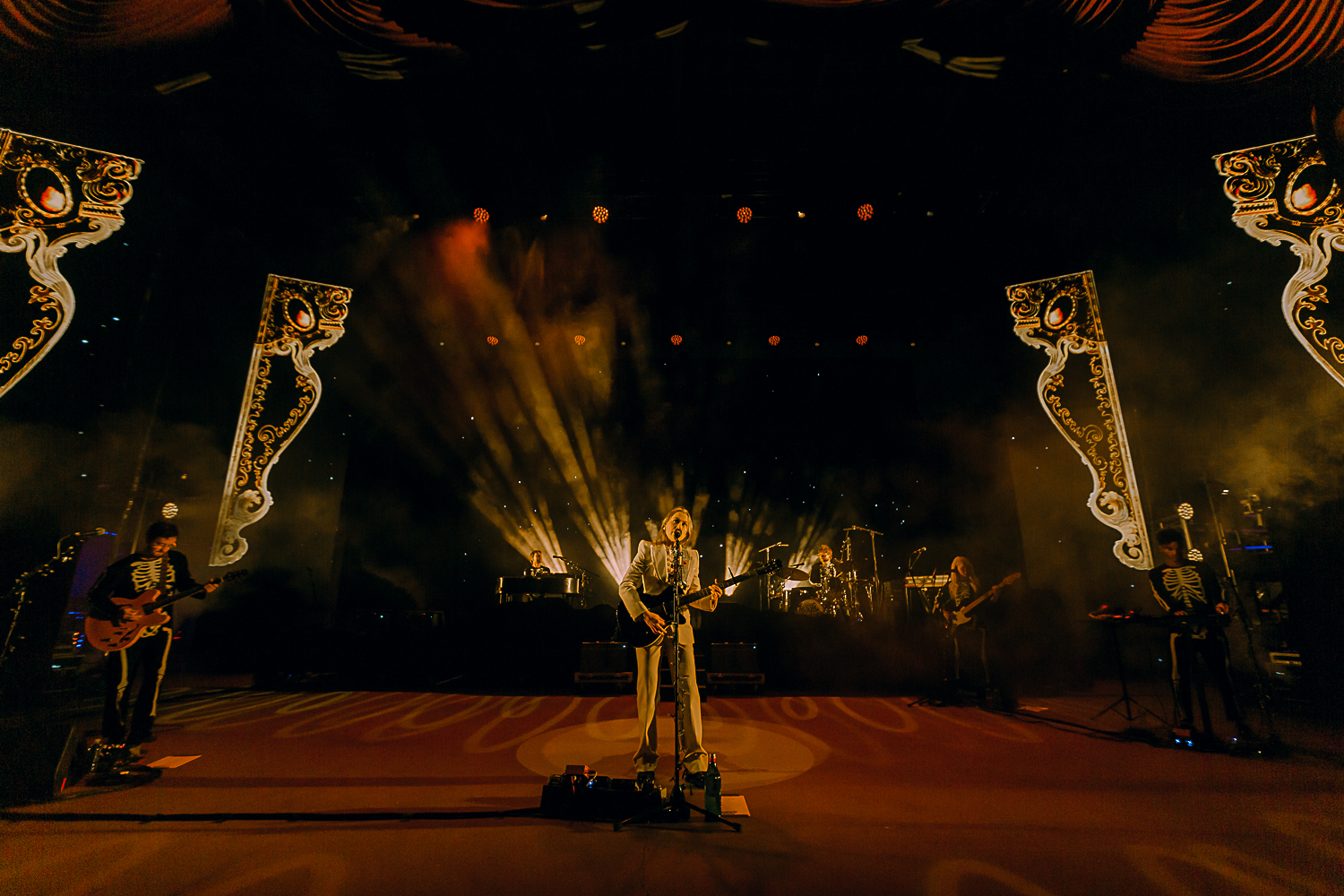 Throughout the evening, Bridgers continued to give her fans a reason to love her. Touring in support of her latest album, Punisher, she performed a slew of the album’s best songs, but still gave devoted fans plenty of opportunities to hear their old favorites — including dusting off an often-forgotten fan favorite for the encore: “Waiting Room.” Her short song intros allowed the music to shine while her brief anecdotal interludes gave fans a chance to know the individual behind the art. But even though powerful lyrics and sweet instrumentation were put on full display, it only reminded fans that the real star of the night was standing center stage at Red Rocks, and we were all simply fortunate to witness a master at work.