Music has a long and complicated history of highlighting societal issues, pushing for cultural evolution and criticizing global institutions. While American protest music is commonly associated with the civil rights movement during the 1970s, music’s political agenda actually dates back to our country’s founding with Joseph Warren’s “Free America” — a Revolutionary War call to action. It’s fair to assume that protest music is traditionally rooted in emotional ballads and somber sounds, but that’s not true across the board. Local Latin rock band Los Mocochetes are challenging that sentiment with their new EP, Mucho Gusto, which ventures away from the classic motifs of protest music and makes something purposeful that you can dance to. It’s equally complex and simple, serious and fun, and definitely effective.

Everything, from the band’s origin story to the literal meaning of “Los Mocochetes,” represents their sound and mission. Like their music, their name represents the duality of innocence and responsibility. It’s a combination of two words – “mocoso,” which literally means “booger child,” more accurately translated to “snotty nose kid” and machete. Joshua Abeyta explained how they came up with this name on a trip to New Mexico, where the band was “reconnecting with the spirits.”

“What’s at the root of all of this is jokes. When we first met, before we ever laid hands on our instruments, we were immediately like ‘what’s that in your nose, what’s that on your shirt. It was just a joke. I think that’s the glue that really keeps us together. As much as we go through difficult times together, we know how to bring it back to that punchline, and I think that’s beautiful.” 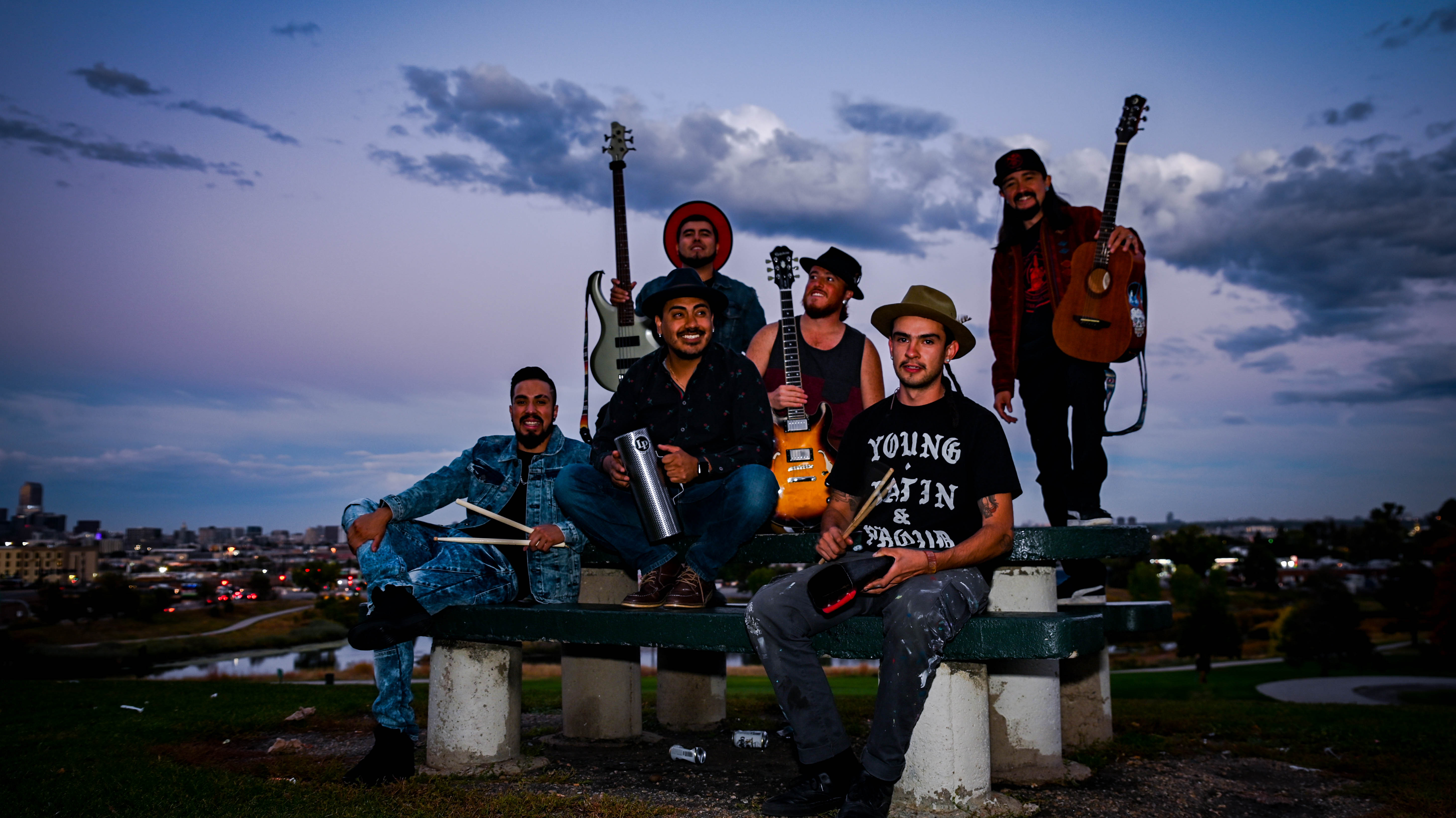 While “mocoso” represents the more lighthearted demeanor of the band, the second part of their name, “machete” represents the more serious nature of their lyrics, as Jozer Guerrero – percussionist and vocalist – explains, “A machete could be a weapon or it could be a tool. I think a big part of it too is that we are youthful spirits. Josh was set right about the jokes, but we also have this tool and this responsibility. It’s our job to decide whether we want to use that as a weapon or use that as something to build up our community, our gente (people), our raza (race) and so forth.”

This concept of innocence and responsibility is deeply embedded in the sound and lyrics of Mucho Gusto, and is most clearly articulated on the track “Tacos.” On the surface, the song is a playful tribute to Mexico’s most iconic cultural dish. Look a little deeper at the lyrics however, and you can see that there’s much more to the song than expressing a deep love for tacos.

Denver is known for its unique spin on traditional Mexican dishes, which usually includes smothering burritos in green chili. Despite the physical distance from the Mexican border, the Denver area boasts in its celebration of Mexican cuisine. But, how much of this “celebration” is actually just a guise for appropriation? Does Denver really acknowledge and appreciate the local Mexican population, or does it solely embrace the parts of that culture which fit its desires while simultaneously condemning other aspects of the Mexican way of life? Guerrero believes the latter.

“People move to our neighborhood (Federal) because it’s such a beautiful cultural spot, full of vibrant people, music and colors. But then they call the cops on us when we have celebrations or when we bust out our low riders or when the taco trucks pull up outside of their house. We wanted to address that as well, the appropriation of our culture. Americans want to consume our culture, they want to consume our food, but they don’t want us here.” 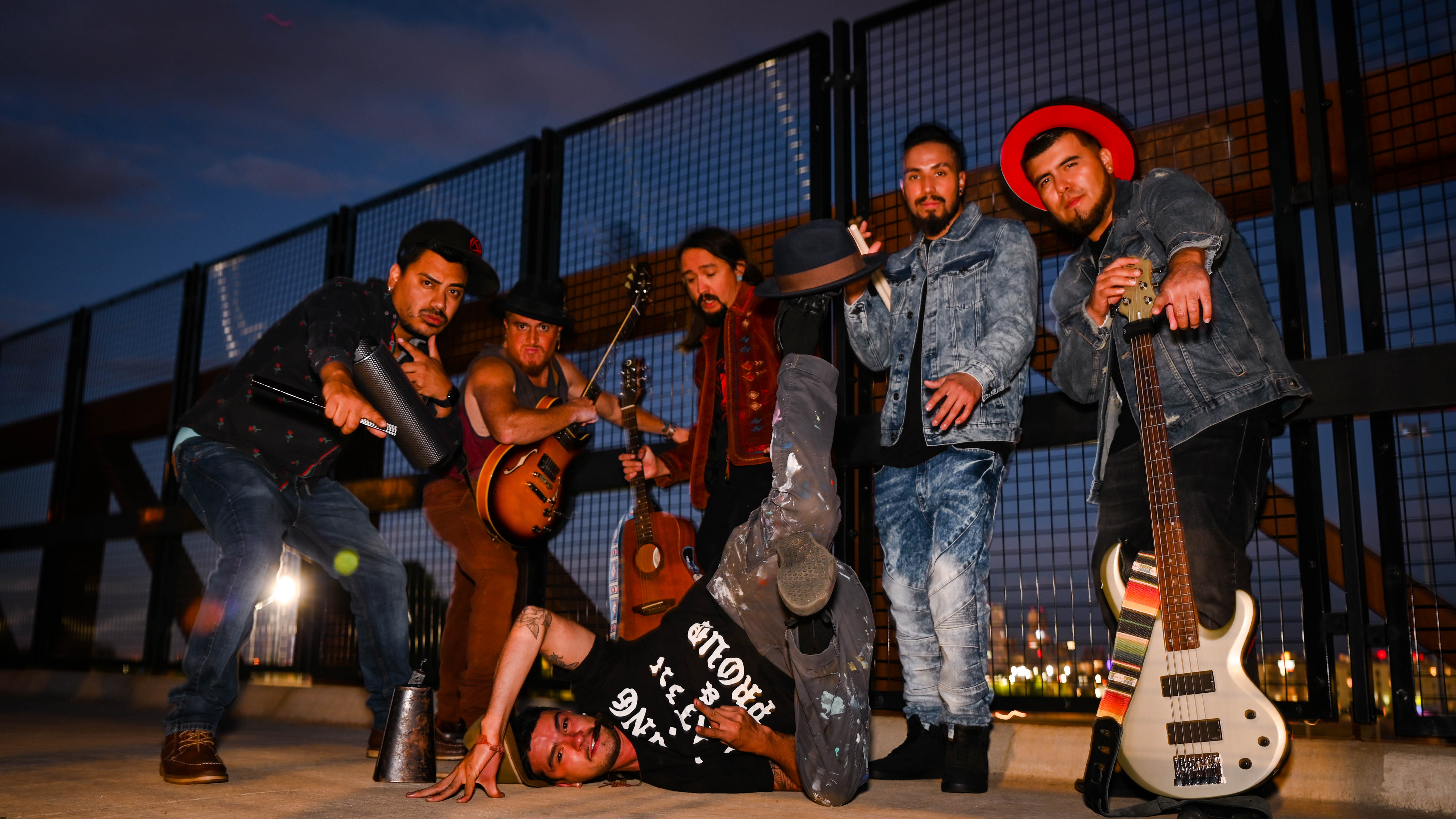 Each band member has a deep connection to their Hispanic roots, especially when it comes to music. In fact, some of Guerrero’s earliest memories are of morning aromas swirling around his kitchen as his mother danced around the kitchen to Cumbia music while she prepared breakfast. Shortly after becoming acquainted, the band began to bond over their Latin heritage. As they passed around stories of their grandparents and shared admiration for the previous generations’ efforts to make the world a better place for decades to come, something strange started happening. They discovered some striking similarities in their family history. After digging up the roots of their family trees, Elias Garcia – Los Mocochetes guitarist and vocalist – and Abeyta discovered they were long-lost, blood-related family members. After a little more digging, they realized that bassist Diego Florez’s grandparents were also friends with Abeyta and Garcia’s grandparents. Abeyta was sure that these strange connections were no coincidence.

“The fact that we found each other isn’t an accident. It’s an answer to our grandmother’s prayers. Our sense of humor keeps us afloat, but it really is that deep connection to each other and our families that keep us together as a group no matter what struggles we go through.”

Abeyta has been thinking about this concept of generational influence for a while. About 15 years ago, he began spending time in a sweat lodge with a group of indigenous people who introduced him to the seven generations principle, a concept that he does his best to keep in mind with every decision he makes.

“That was the first time I had heard the concept of the seven generations before you and the seven generations that come after you. Obviously, we fall short sometimes because we’re human, but when you’re on the right road, you’ll think about that every step and try to affect positive change so it reverberates forward.”

So how exactly does Los Mocochetes strive to create a better world for generations to come? Through their music. At the end of the day, that’s what their music is all about, it’s a call to action to create a better, more sustainable world for the collective human lineage. That’s what Mucho Gusto is – a musical effort to encourage positive change for future generations. The title – which means “nice to meet you” and also “lots of joy” represents this mission perfectly. On one hand, the band is introducing themselves to the world through their first album. On the other hand, they’re also introducing their children and grandchildren to a world they’ve (hopefully) made better through their collective efforts. Despite the complicated and corrupt nature of our society, there’s still lots of joy to be found in community, music, and especially dancing. 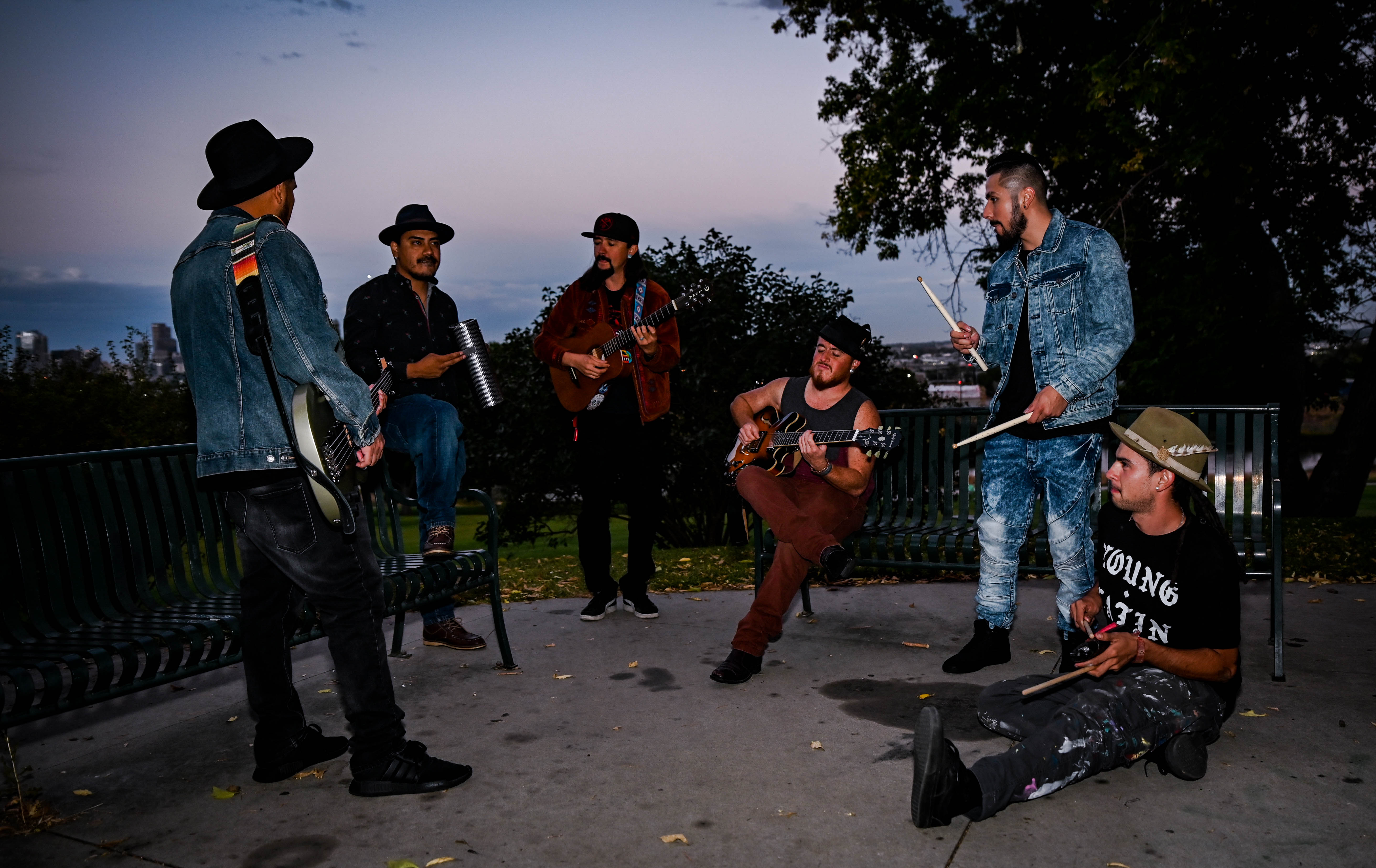 Mucho Gusto didn’t happen overnight. Although the band has been performing together for half a decade, this is the first project they’ve released. This decision was two-fold – they wanted to make sure they developed their musical chemistry and songwriting abilities together as a band in order to release the best material possible, and during a time when they felt their music could have the most impact.

After four years of political turmoil and racial tension, and a year and a half plagued by a global pandemic, they finally felt ready to introduce their message to the world, as Guerrero explained, “I think it’s the perfect time to release [Mucho Gusto]. I think our community’s voice needs to be heard, I think our message needs to be heard. Essentially at the end of the day, we wanted to document this moment as well. We wanted to make sure that our children and their children can remember how our people stood up, fought back and united as one to fight for something that we all believe in.”

Unsurprisingly, their music isn’t always well-received. The political nature of their music is inherently divisive, offending people who disagree with their anti-establishment lyrics and blunt criticism of law enforcement. Take the track “Rocks” for example. It’s a cry for help against police brutality inflicted on minorities and details the deaths of Marvin Booker and George Floyd. Marvin Booker, a homeless 56-year-old street-preacher, was killed in 2010 while being restrained by Denver sheriff’s deputies who suffocated him with a police chokehold in an eerily similar fashion to Floyd’s death in 2020. 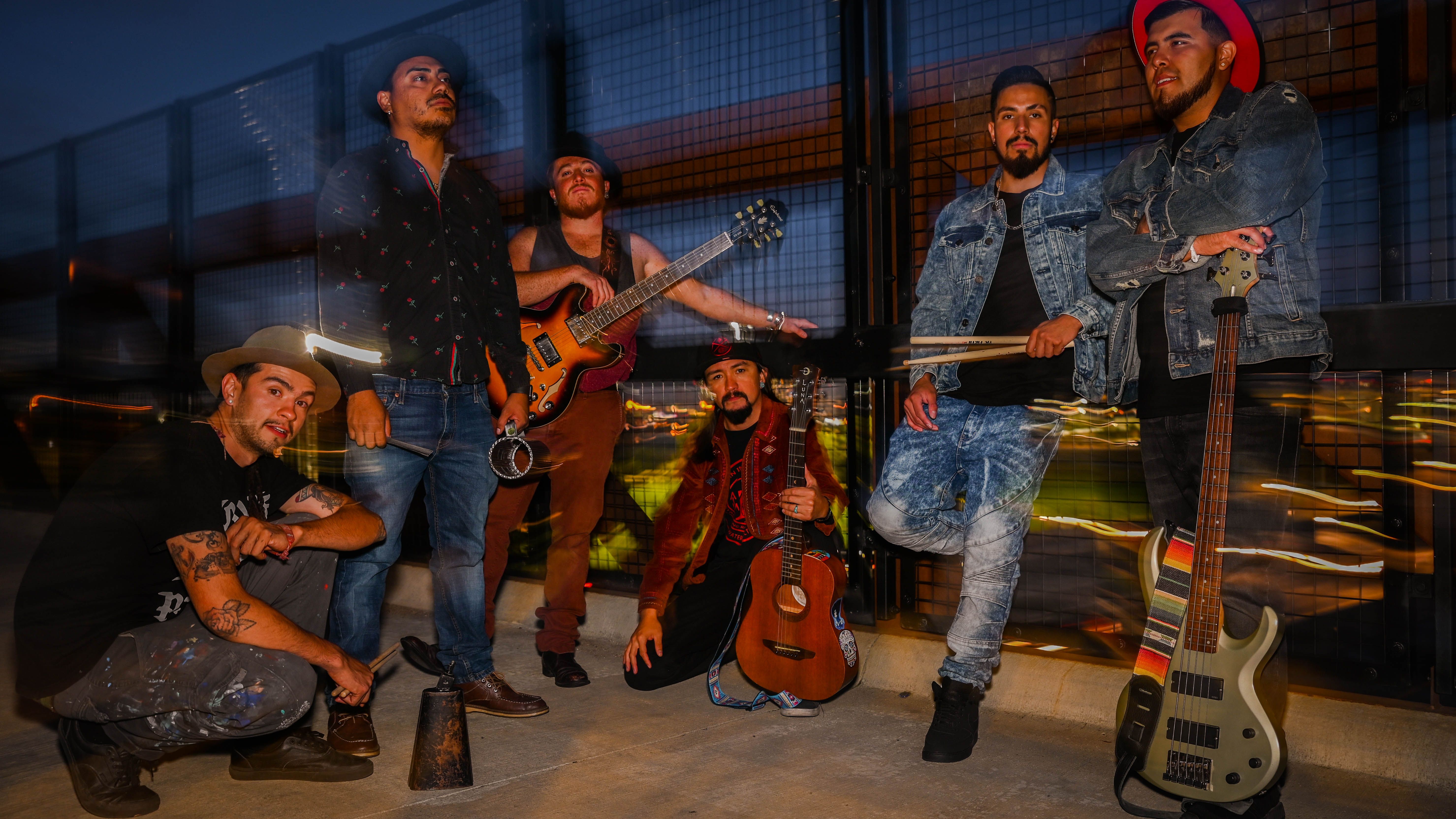 After being booked to perform on the main float during the Saint Patrick’s Day parade a few years back, the band had a long conversation about whether to perform “Rocks” or not. Eventually, they decided they had to perform it despite knowing it might piss off some people in the crowd.

“I don’t know why they booked a bunch of Mexicans for the Saint Patrick’s Day parade on the main float,” Abeyta said laughing. “We got our asses chewed by the person who booked us for the parade. It was interesting because we thought about it. We had a long conversation at rehearsal. Should we play it? Should we not play it? Well, let’s play it because it needs to be heard. But also let’s take out the cuss words. And instead of saying, ‘fuck the police,’ we literally said, ‘love the police.’

Changing that word didn’t matter, their message was obvious. 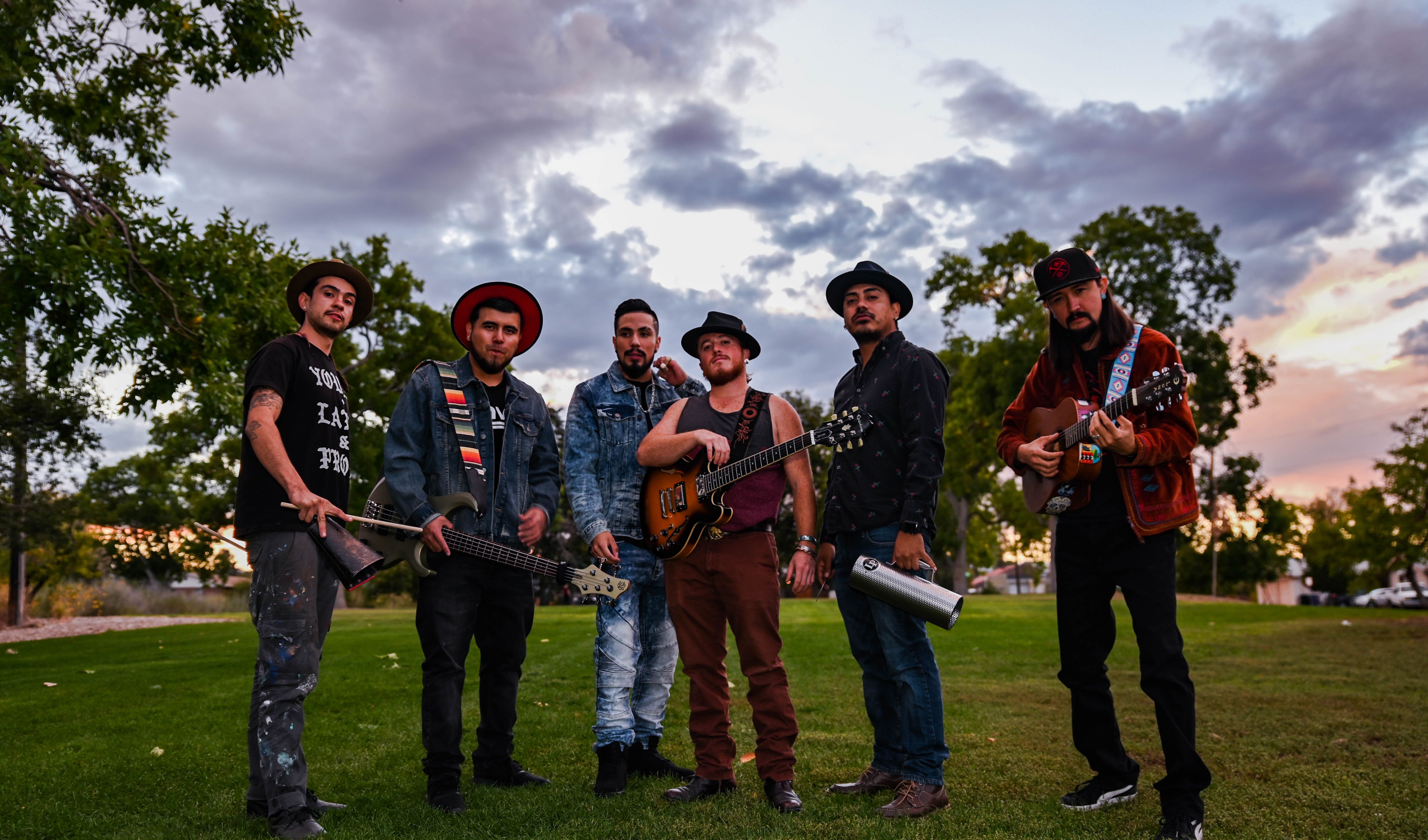 Regardless of your political stance, Los Mocochetes’s unflinching pursuit of their musical vision is admirable. That’s what makes Mucho Gusto so powerful. It’s controversial and consistent, but it’s also groovy. It’s a genuine representation of Latin-American culture and their respective struggles that never sacrifices the upbeat Latin sound for their political agenda. Their music comes from the heart, and there’s nothing else they would rather be doing.

“If we’re playing political music but we make people dance, it’s a good way for us to let people know that we’re out here celebrating and let’s have a good time, but also there’s work to be done in our communities,” stated drummer, John Rubio. “I think that was our goal of making Mucho Gusto.”

Guerrero added “We’ve always been expressing ourselves through music. When people ask why we write revolutionary music, it’s just that I don’t know how to write anything else. That’s just kind of who we are as people too. As much as it is a strategy, it’s also so genuine to who we are as individuals.”