Review – Harry Styles Brought His Love On Tour to Denver

Following his tour kick-off in Las Vegas over the weekend, Harry Styles brought his “Love On Tour” to Denver’s Ball Arena for a sold-out show on Tuesday night. Fans showed up and showed out for the event, dressed to the nines in a wide array of individual styles — funky prints, ’70s-inspired patterns, bell bottoms, mom jeans, crop tops and even a wedding dress. After more than a year of social distancing, fans were ready to groove and dressed to impress at the standard of the style icon that was slated to take the stage that evening.

Jenny Lewis opened the evening, taking the stage adorned in satin and sequins. As fans weaved through Ball Arena in search of spiked seltzer and concert merch, Jenny Lewis took command of the stage to create a welcoming atmosphere that built to a tense excitement as her set progressed on. Comparing the entire experience to a dream, she thanked fans and Harry Styles for welcoming her to the stage — concert-goers reciprocated by shining their flashlights high into the air and bouncing them along to the beat. 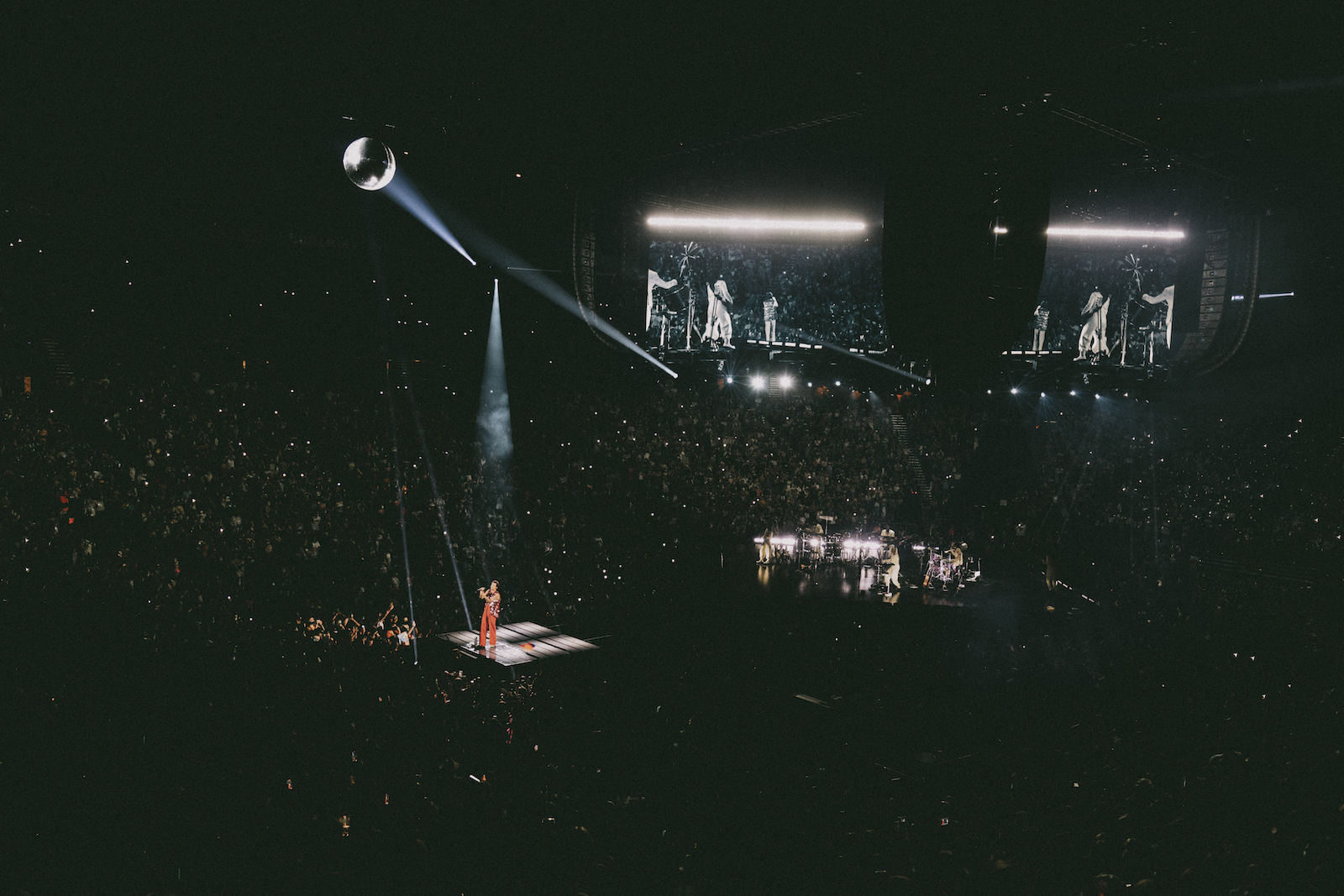 Encouraged by the crowd, Lewis gracefully waltzed through her set. She briefly taunted the crowd “this isn’t a cocktail recipe,” before launching into a lively performance of “Red Bull & Hennessey.” After the song concluded an old telephone set on the stage began to ring only to be answered by Lewis, who informed fans that it was her dog calling. Over the phone, she professed her love for Denver before answering that yes, she would play the song she wrote for her dog before easing into the yet unreleased “Puppy In a Truck.”

When Lewis left the stage, fans turned the interlude period into an opportunity for a sing-a-long. Belting the lyrics to the music being played over the speakers, fans refused to quit partying as they danced and sang until the headlining act began.

The crowd’s passionate sing-a-long to Marvin Gaye’s “Let’s Get It On” transitioned to screams as the band made their way to the stage. As the lights dimmed, the crowd’s excitement reached an explosive zenith when the man of the hour emerged from center stage and immediately began a warm performance of “Golden.” 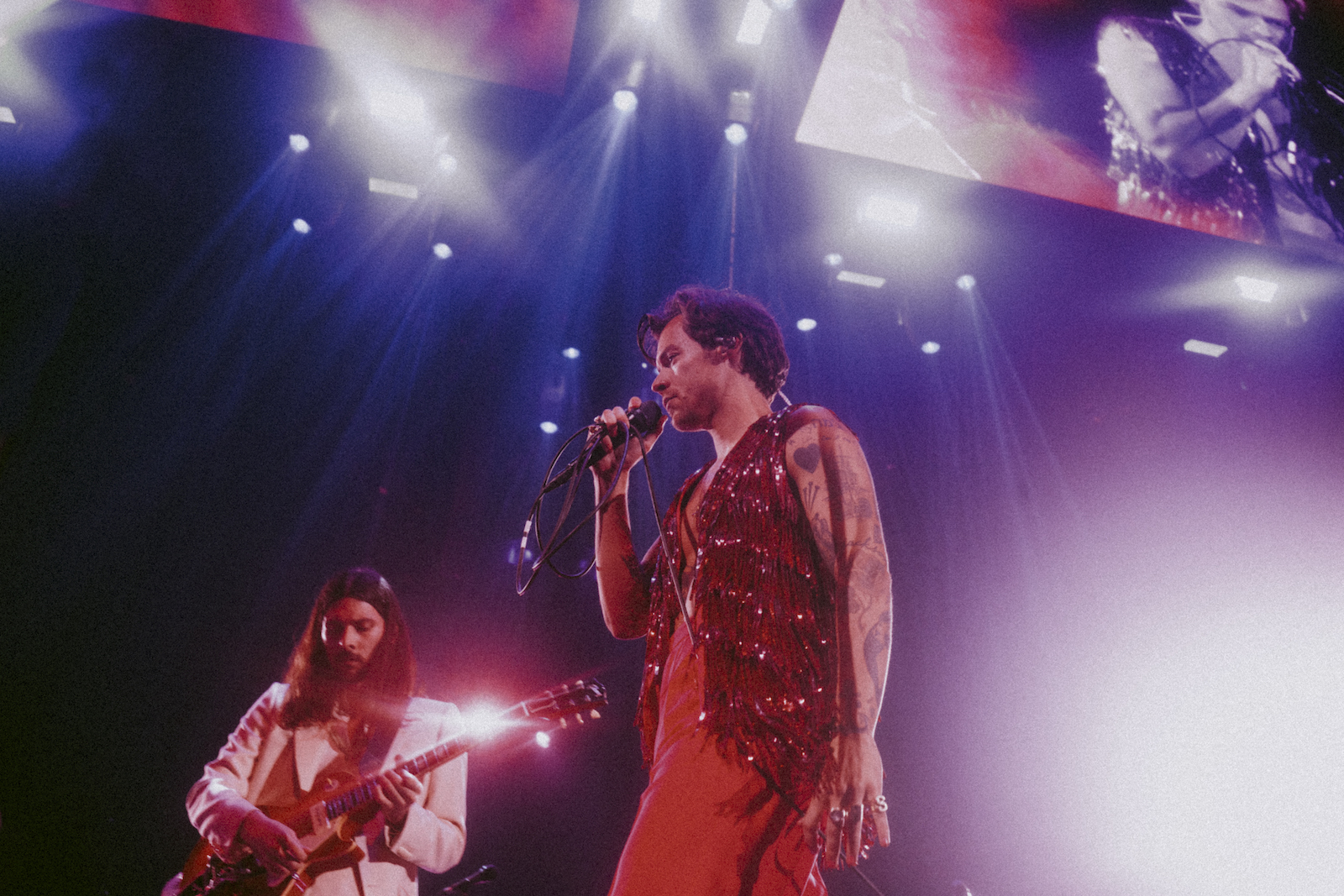 After a few songs, Styles paused to revel in the moment. He acknowledged the difficulties of the last year—noting that we all experienced something collectively as well as individually — and expressed his gratitude for being on stage. After the moment of seriousness, Styles reinvigorated the crowd with a promise to give the best show he possibly could and encouraging fans to have as much fun as humanely possible.

Bounding and bouncing around the stage, Styles ensured that fans got a chance to see him no matter what seats they were in. He grinned at fans as he explained that the band was playing in the round, noting that “at some point, you will have my face,” pausing as fans erupted into cheers before continuing “at some point, you will have my ass,” sending the screaming fans into a frenzy.

With youthful and relentless energy, Styles ran around the stage giving attention to fans throughout the arena as he serenaded through hits from his latest album, Fine Line, including heartfelt renditions of “Adore You,” “Cherry” and “Treat People With Kindness.” Sprinkling in favorites from his debut solo release, Styles ensured that fans got a taste of their favorite songs, no matter what era of his career they became a fan. 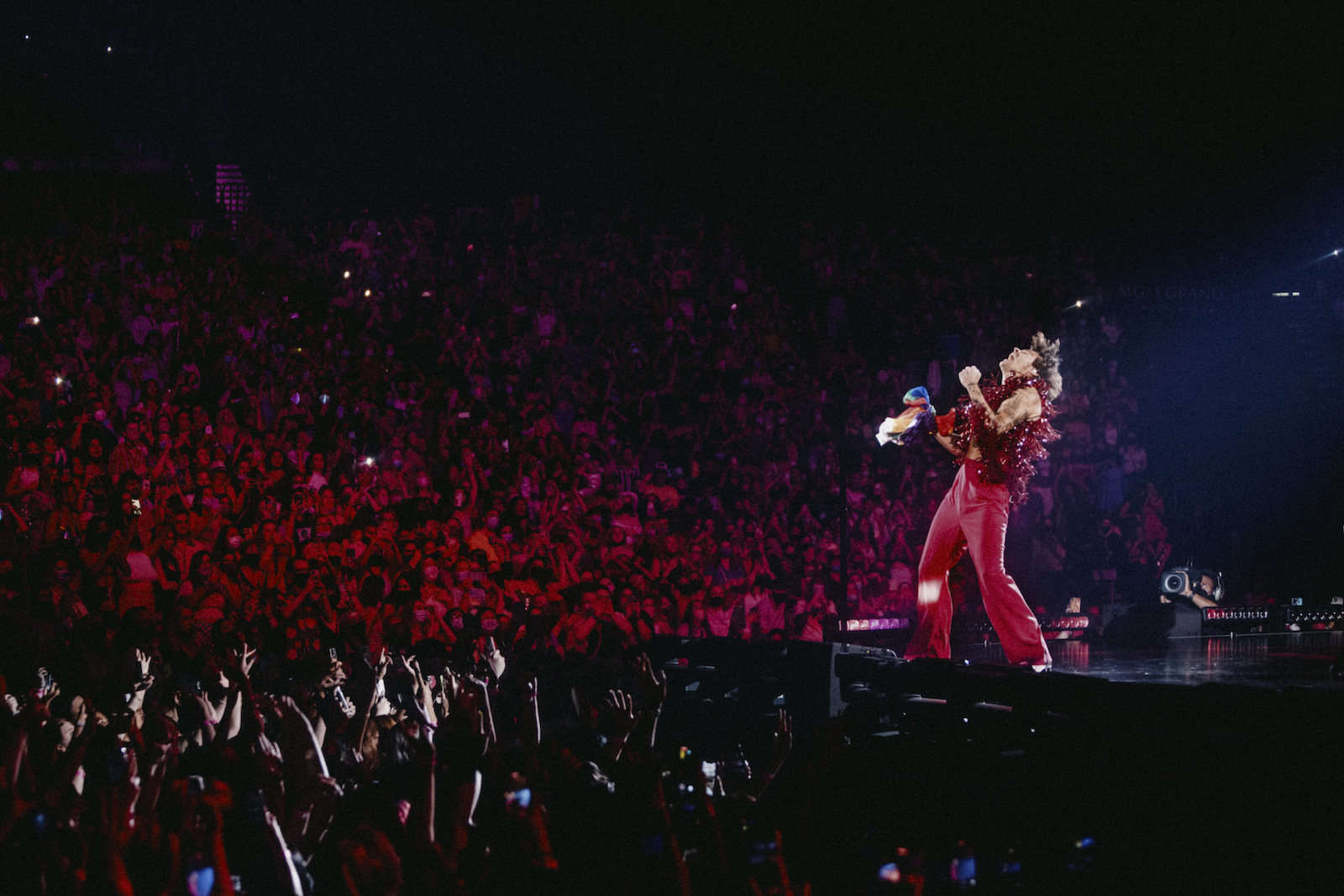 Throughout the arena, fans waved posters and cardboard signs in hopes of catching Styles’ eye. Fans tossed pride flags and a Black Lives Matter flag onto the stage and Styles continued his tradition of integrating them into his stage design, remaining a champion of the causes his fans are most passionate about. Draping them over his microphone stand and draping himself in the flags as the audience cheered, the display only proved to fans that their idol was exactly who they had hoped he would be.

As his set drew to a close, the pop artist rallied the crowd for an explosive end to the evening with a throwback to his days as a member of One Direction with a rock-fueled performance of “What Makes You Beautiful” before closing his set with “Fine Line.”

Despite his disappearance from the stage, fans waited in anticipation of what they expected to be an exciting encore to close out the show. Styles blew fan expectations out of the water with disco balls that descended from the ceiling, sending a snowfall of glittering light over the crowd as he serenaded Ball Arena with “Sign of the Times.” Styles continued his encore with his hit “Watermelon Sugar,” washing the audience in euphoria before closing the evening with the high-octane “Kiwi” before baptizing them in water shaken out of his water bottle. 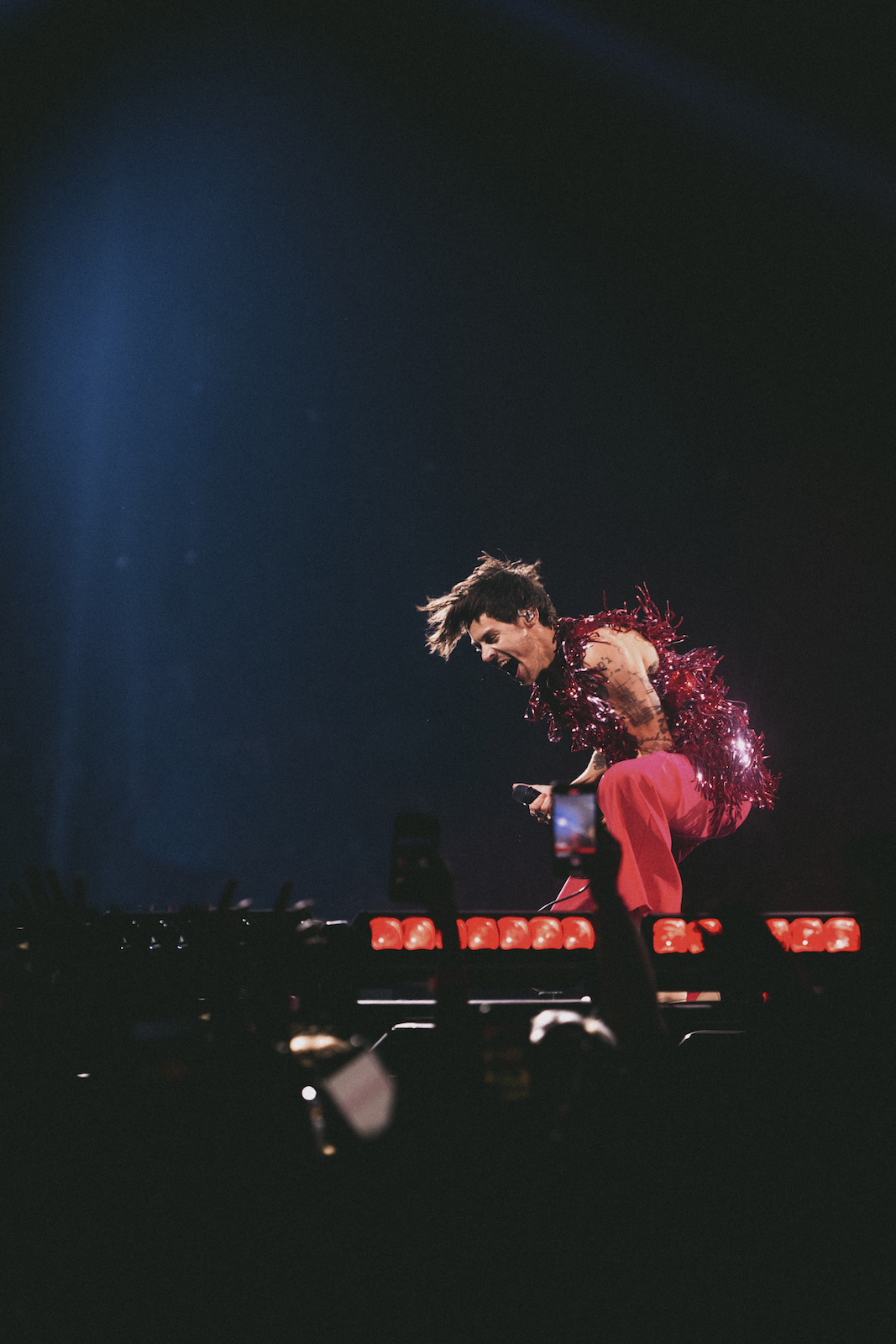 All photography courtesy of Harry Styles.