Dinner usually takes the reigns when it comes to eating out — the luxury of a nice steak or the stroke of celebration are two easy reasons. Nevertheless, when Mark and Terese Nery watched a taco stand near their house close, their thoughts on its convergence brought forth a brunch spot for Denver’s Uptown area. 2008 was precarious for most and that’s when the Nerys sparked their plan to bring wholesomeness to the neighborhood with Onefold. Now coming off COVID, they opened their second location in LoDo.

They expected to open in 2020, but development delays and the pandemic slowed down the process. Nevertheless, their next adventure within the industry is the ideal match for the boutique apartment it lives inside — The Pullman.

“We were never in the restaurant business before this little hobby. At least it started as a hobby,” Mark said.

Owning a restaurant as a hobby might sound comedic to most restauranteurs with the failure rate high and margins low. Nevertheless, Terese, a former architect, saw their original precious space as far more than blueprints and rooms. Instead, it’s a stop on their neighbors’ morning commute. It’s the spot to ditch oatmeal and opt for congee, a savory rice porridge. Onefold holds the comfort of eating at the kitchen counter at home but offers a breakfast beyond eggs and bacon. Now about 13 years later, that has all been confirmed with the growth of a bigger space.

READ: THE MORNING AFTER: ONEFOLD’S SIMPLE AND ELEGANT WEEKDAY BRUNCH 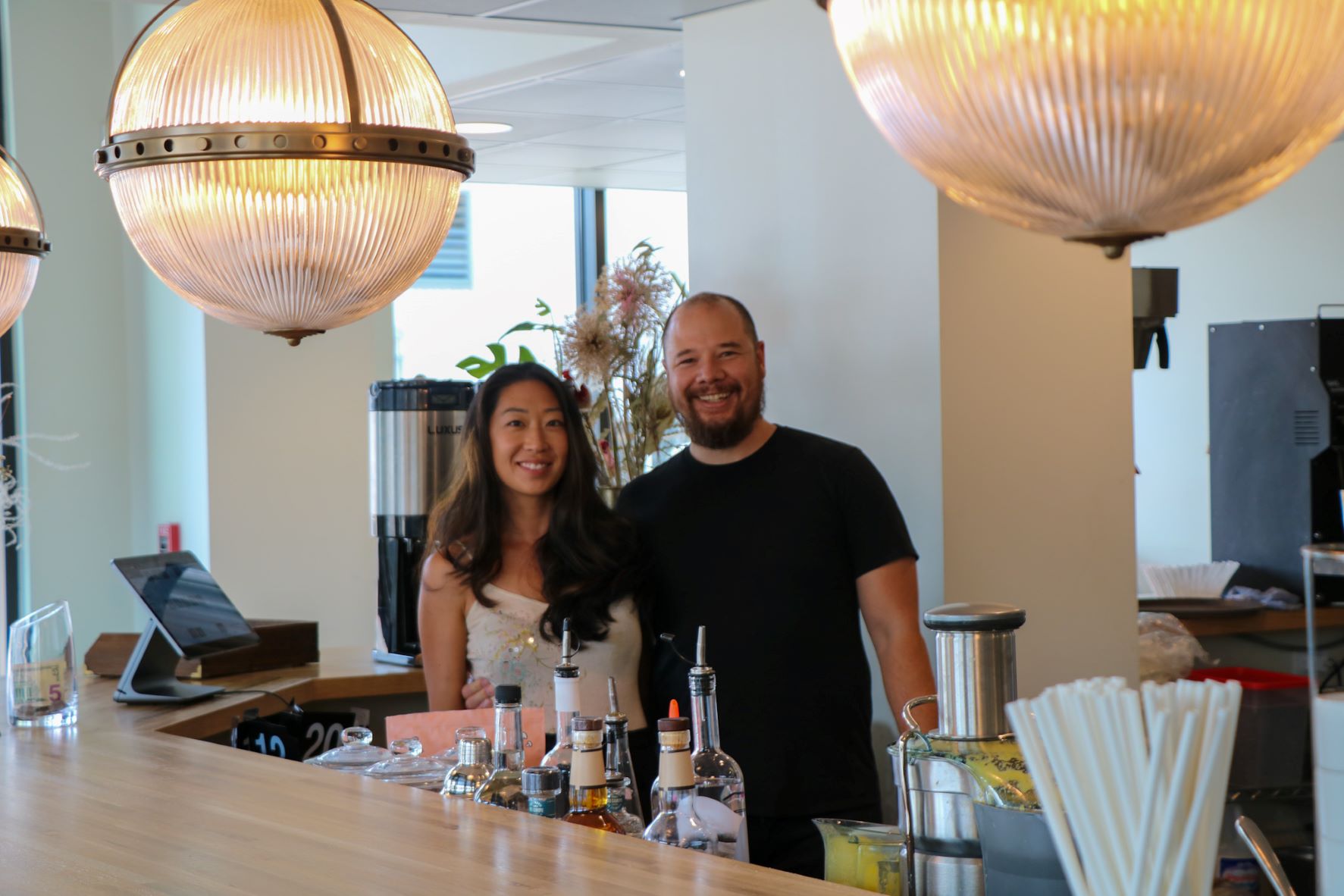 Beginning in 2018, the Nerys agreed that they needed more space. Interestingly enough, their name Onefold emerged from wanting simplicity. Mark chuckled as he mentioned it as he thinks about Onefold’s evolution.

“A lot of people say it about their passion projects but it was never supposed to end up like this. We’re thrilled it did but we didn’t intend it in the beginning” he said.

Onefold represented the modesty of the concept. The grandiose nature of menus surpassing the length of short novels lacked thoughtfulness. The Nerys began with a five-item menu and cherished their ability to be experts at each one. With time, their proficiency grew and specials became regulars by popular demand.

The Nerys influenced their menu by their native cultures and what Denver holds. The fried rice ties to Mark’s Filipino side as he enjoyed this while most Americans start their morning with cereal. The addictive umami flavor comes through the tamari soy sauce. Then, a Jackson Pollock-style drizzle of chili crisp — the now more trendy sriracha — glisten on top of sunny side up eggs. Releasing the runny egg yolk makes a sauce for the rice as it melts into the entire dish. Treat the beautifully composed plate like a tossed salad. 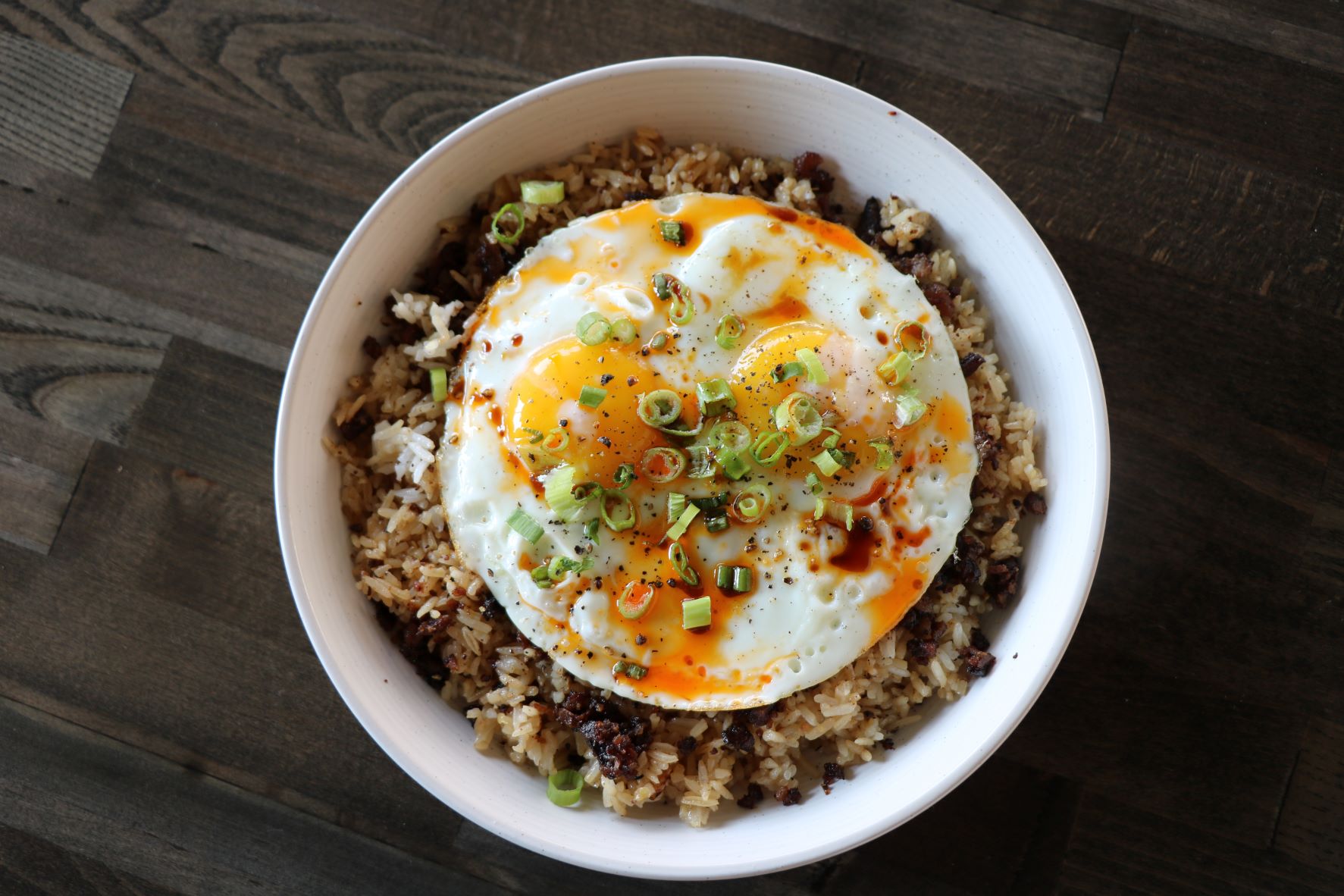 The addition of congee drives from Terese’s Chinese side of the family. A spoonful of this comforting porridge hits the spot even in the warm months. The daunting-size bowl arrives with a simple aesthetic, but digging through resurfaces a delicate duck confit and poached egg. The aroma of the ginger and scallion captivates all those surrounding.

As their concept caught on, they hired chef Neo Cruz to control the back of house. His Oaxacan background came forth with the breakfast tacos, chilaquiles and their most notable breakfast burrito. They have a hint of southwestern feel as many Denver breakfasts do, but the alight nuances set them apart yet again. The tortillas made in-house have a bit of fluffiness to them and hug their fillings tight. Their trademark duck fat fried potatoes and eggs create the first layer. Then a choice of local Tender Belly bacon, chorizo or sausage. These essentially mini versions of the massive burrito differ from the original with the griddle toasted mozzarella layered on top, like raclette bubbling on the rind and then pushed onto potatoes in France.

Their new space is to be able to hold all those hungry for this renowned breakfast in Denver. It hits a new demographic and has travelers riding into Union Station take a walking detour to this location rather than a Uber ride.

The Nerys still maintained the integrity that Onefold was based on — the minimalist decisions, bright white walls adorned with greenery. Even by going bigger, they retained this mentality from the original spot to maintain partnerships with — Polidori Sausage, Tender Belly Bacon, Middle State Coffee and Altius Farms greens to name a few.

Onefold might have turned to twofold with this new opening, but there’s only one duo like the Nerys that have brought their heritage and heart to the Denver brunch scene.