Photo Courtesy of The Denver Dish

From the flames of a wok and the cumulative knowledge of four friends, an innovative Korean fried chicken restaurant recently opened in Centennial, Colorado. WingWok is the newest novel concept from seasoned restaurant executive James Park.

Surrounded by a group of friends with various professional backgrounds, Park is excited to bring wok-finished Korean fried chicken to the front range. While some members of the team are of Korean decent, it’s important for Park and chef Yong Ho to reimagine traditional flavors in a more approachable way.

Though there are plenty of restaurants that offer Korean fried chicken in Colorado, this concept is unique in many ways. From the gluten-free and twice-fried chicken base to the conglomerate of “yangnyeommy” sauces that are customizable with each order. Not only does rice flour add a crunchy outer layer to the wing, it is also naturally gluten-free. Which comes in handy for proprietor Brian Gunning’s daughter who is Coeliac.

As for “yangnyeommy” — a combination of yangnyeom and yummh — the aptly named array of sauces are familiar in Korean cuisine for a sweet, spicy and tangy sauce accompanying fried chicken. The dry-rub buffalo was also inspired by Gunning who is originally from Buffalo, New York. Traditional wing sauces have a vinegar base that don’t withstand the high heat of a wok. So wisely, the team was able to pivot and come up with a dry rub buffalo spice combined with fresh bleu cheese dressing for dipping.

While the Korean-inspired sides and flavors are enticing, the restaurant is truly dedicated to elevating its versatile chicken. The fare also includes a Miracle chicken burger ($8.95), which features Gochujang chicken tenders topped with Seoul slaw and crisp cucumber coins in between a toasted potato bun. There’s also a Korean Ssam burrito ($8.95) that comes with a choose your own yangyeom sauce tossed chicken and kimchi fried rice wrapped in a tortilla.

Similar to a lot of new business models popping up around Denver, this WingWok location is set up exclusively for take-out and delivery through DoorDash and GrubHub. The second location out of Pindustry—Greenwood Village’s newest eat and play concept—is slated to open as full dine-in this fall and will branch out across Colorado to share its East-meets-West inspired menu.

“I’ve been working on this idea for several years. I’ve always been quick and extremely proud to share the Korean flavors and culture that I grew up with. It’s very close to my heart. But the timing was never quite right—that time is now. This project is the perfect way to introduce the authentic deliciousness that is the ‘other KFC’ and then take it to the next level with our exclusive wok-finish and insanely fast service model,” Park said. 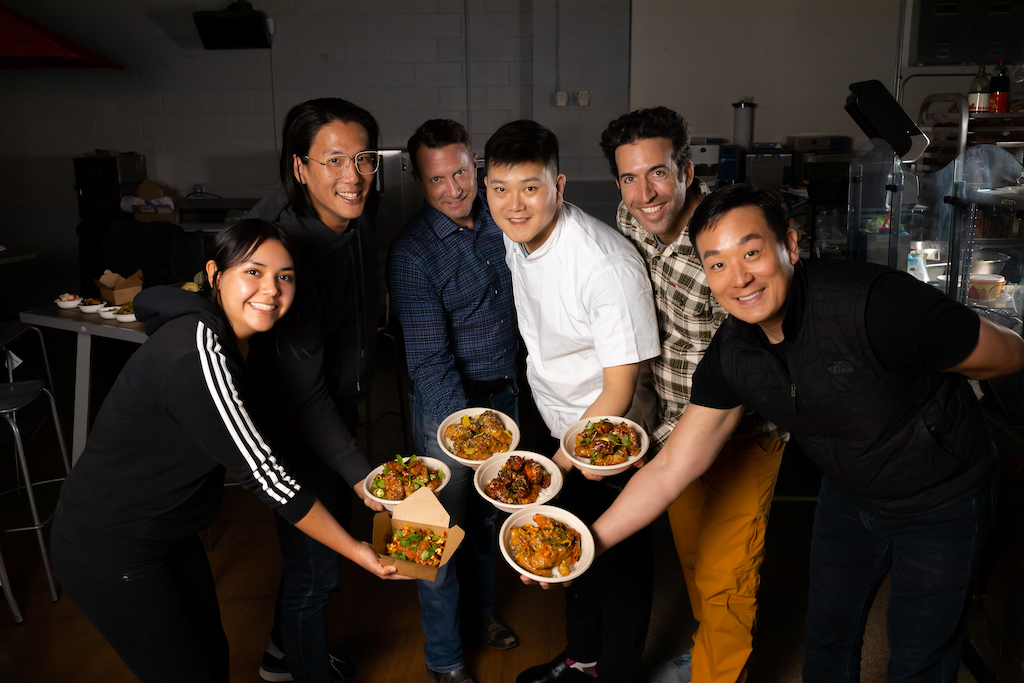 While this venture is relatively new to a couple of the partners, Park has a 20-year history with the fast-casual space including his success with Garbanzo, Which Wich and Charley’s. Park and his family emigrated from Korea to the United States and new opportunities arose like the ownership of various successful restaurants.

“It’s really remarkable that we have three culinarians with Korean backgrounds as part of the WingWok team,” said Frisch. “We’ve talked from the beginning about the importance of being authentic, and these three guys bring a genuine Korean perspective to our Korean fried chicken restaurant — right down to making sure we have their favorite childhood snacks from Korea for purchase. Their love for the food shines through and really is contagious.”

All photography courtesy of The Denver Dish.