Style is an illusory thing. Trying to boil it down to a science leaves many perplexed and confused. Nonetheless, local personal stylist and founder of EgoSHY Mary Hayes-Olubadew0 has built her business on demystifying the art of style. Her business, EgoSHY, is a fashion consulting agency aimed at helping clients find unique forms of self expression through personal style.

We here at 303 Magazine had the chance to speak with Hayes-Olubadewo about her views on personal styling, her experience in the fashion industry and how the industry can better cater to people of all backgrounds and identities. 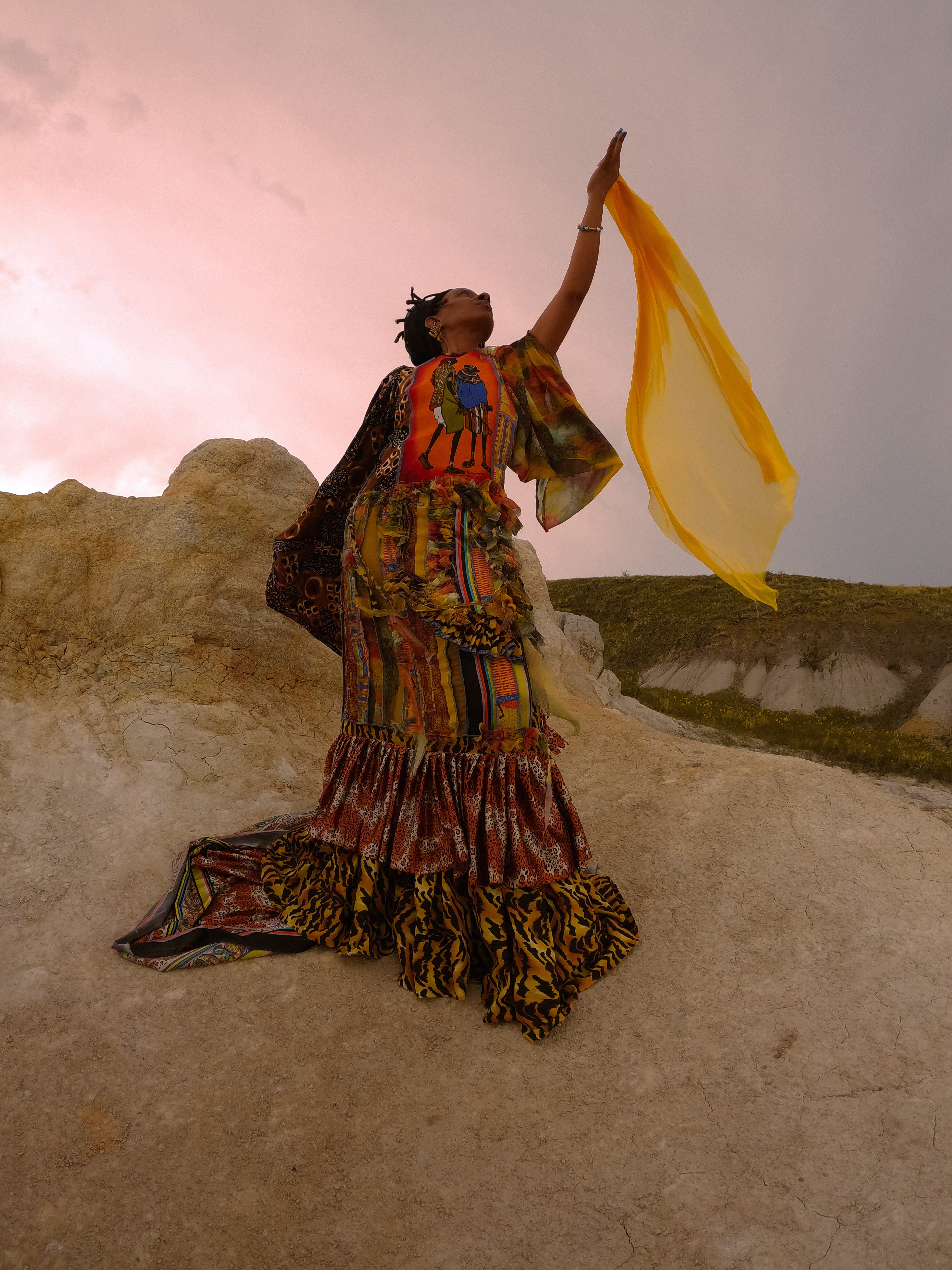 Hayes-Olubadewo is a Colorado native. At a young age, her parents relocated from Denver’s Park Hill neighborhood to the suburbs. This move meant that Hayes-Olubadewo was the only Black girl in her school. As a result, she gained an awareness of the cultural differences between her and her classmates that shaped her views on personal style.

“I was the only Black girl in school growing up for the longest — and really was the only Black girl in town. Because I was the Black girl in town, everyone knew who I was, therefore my look had to be on-point. At an early age, my parents taught me that fashion was an important part of my identity. What I wear and how I wear it speaks volumes about who I am, where I come from and where I want to go. They taught me to always dress nicer than required and to dress for the job that I want — not the job that I have.”

Not everything about the transition was easy. Hayes-Olubadewo recalls a conversation she had with her mother. Because her white friends shopped at JC Penny, she wanted to shop there as well. Her mother told her she couldn’t.

“I was absolutely puzzled. ‘Why not?’

“’Because they follow Black people around in the store.'”

Discrimination in the industry

Despite experiencing this type of discrimination, Hayes-Olubadewo stepped into the fashion industry. Prior to opening EgoShy she worked in high-end retail. Unfortunately, she faced similar problems as an employee.

Recently Hayes-Olubadewo had to file an EEOC lawsuit against a former employer for wage discrimination. Additionally, she has dealt with clients underpaying her. Her blog recounts an instance in which a client convinced her to work on a project for free then completely disregarded her when promoting it.

“Just last year I experienced discrimination on a personal level. At a time when we were all dealing with the uncertainty of this COVID-19 pandemic, and the sorrow of watching George Floyd, Ahmaud Arbery and the like being murdered in the streets, I was rocked to my core yet did not expect to experience racial discrimination from my own peers,” she recalled. 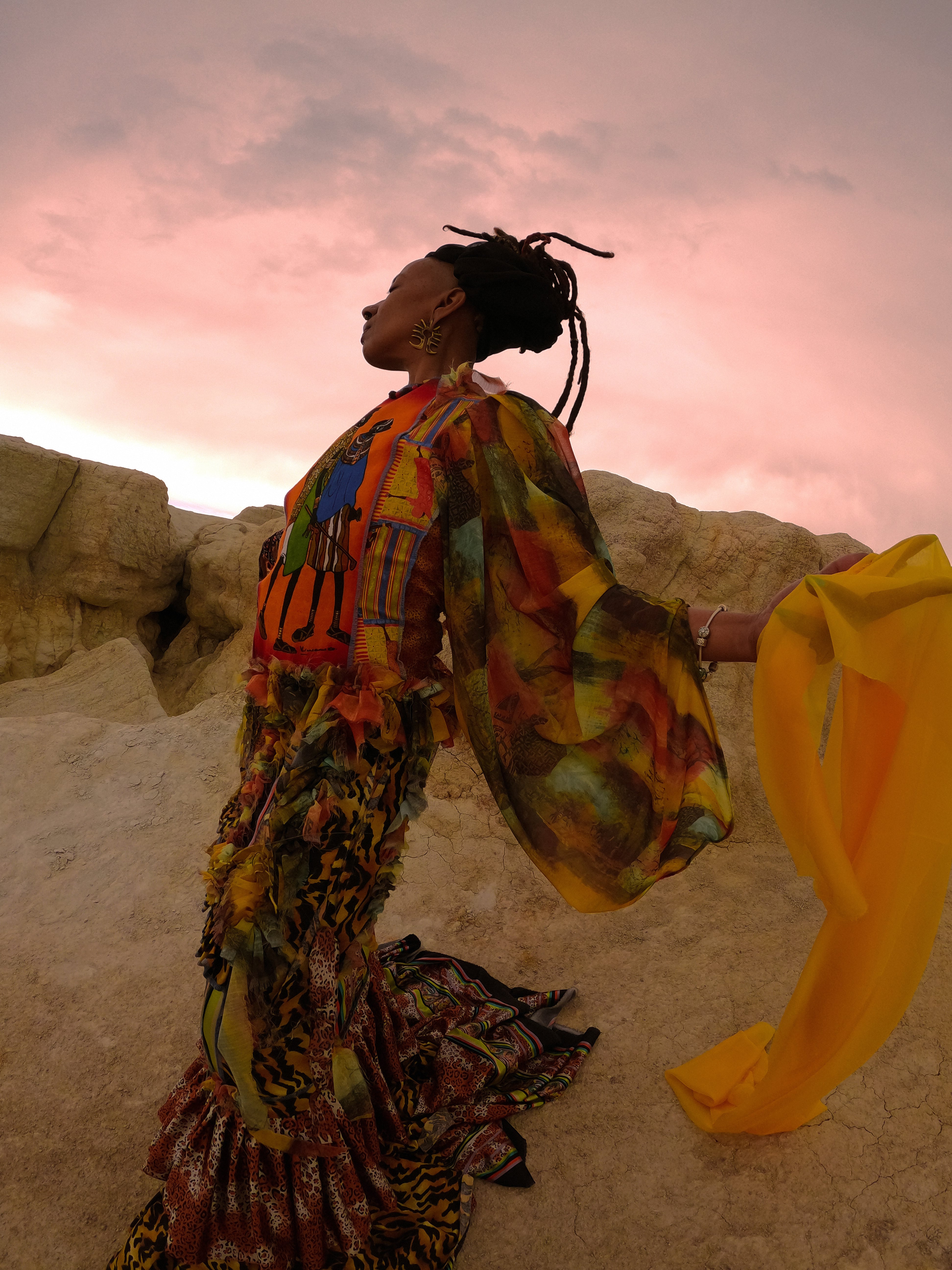 This opposition hasn’t stopped her though. In 2019 she founded EgoSHY. Her vision is based on the premise that everyone should be able to express themselves stylistically. This, she says, is a fantastic way to contribute to the community.

“I always wanted to create an organization that would empower people. Whether it’s directly through fashion or just in the way we treat each other, I want EgoSHY to have an uplifting impact on our community,” she explained.

Rather than hiding behind clothing, Hayes-Olubadewo focuses on using an individual’s quirks to add personality to their look. “I had a client a year back who absolutely loathed the fact that he wore glasses,” she explained. “He was an IT Engineer and felt the glasses made him that ‘stereotypical nerd’ – his words, not mine! – Well, we were determined to turn that around! We went out and found him the biggest, sharpest Tom Ford frames we could find. From that day forward, he got so many compliments on his glasses — and he didn’t feel like a nerd anymore!”

This celebration of diversity extends beyond the individual. Hayes-Olubadewo enjoys taking the time to learn about different cultures as well. Often times she finds this learning to spark new creativity. “It’s fabulous because it’s not only an opportunity to learn something new, but it also literally inspires so many ideas that weren’t present before,” she said. 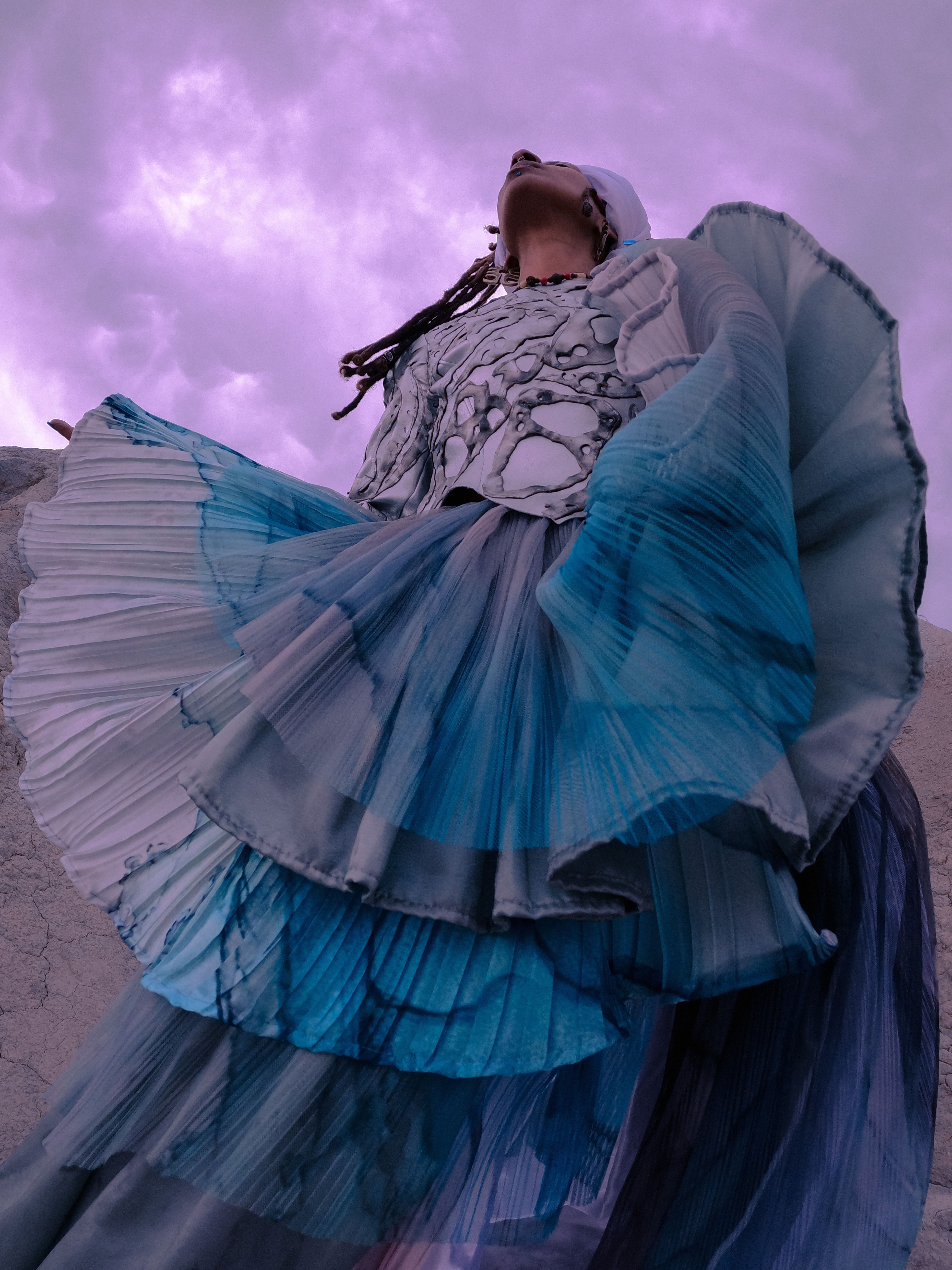 While EgoShy places a great deal of emphasis on individuality and inclusion, Hayes-Olubadewo is keenly aware that the attitude is not universal in the fashion industry. Along with her own experiences, she pointed to discrepancies in retail between urban and suburban areas. Places like the Aurora Town Center have a disproportionate amount of stores selling Nikes. Meanwhile, higher-end retailers are scarce.

“They’ve assumed that because the median household income is lower than the surrounding suburbs, that consumers have less disposable income, therefore, making premium retail offerings scant, if not nonexistent,” Hayes-Olubadewo explained. “This not only hurts retailers – because they are leaving money on the table – but it hurts the community because they will not have the chance to raise wages with higher-paying retail jobs and also they won’t have access to higher quality products and services.”

When asked about how the fashion industry could become more inclusive, Hayes-Olubadewo emphasized intentionality. Change will only come when those in the industry focus on diversifying the space. Hayes-Olubadewo thinks the industry is uniquely positioned to celebrate diversity and difference because of it functions as an integral part of art and culture. “When buyers, designers, creative directors, producers, photographers, models, assistants, stylists, writers, merchandisers, retailers, when everyone makes the decision to be intentional about being inclusive and holding space for everyone to take a seat at the table, that’s when we will begin to see change.” 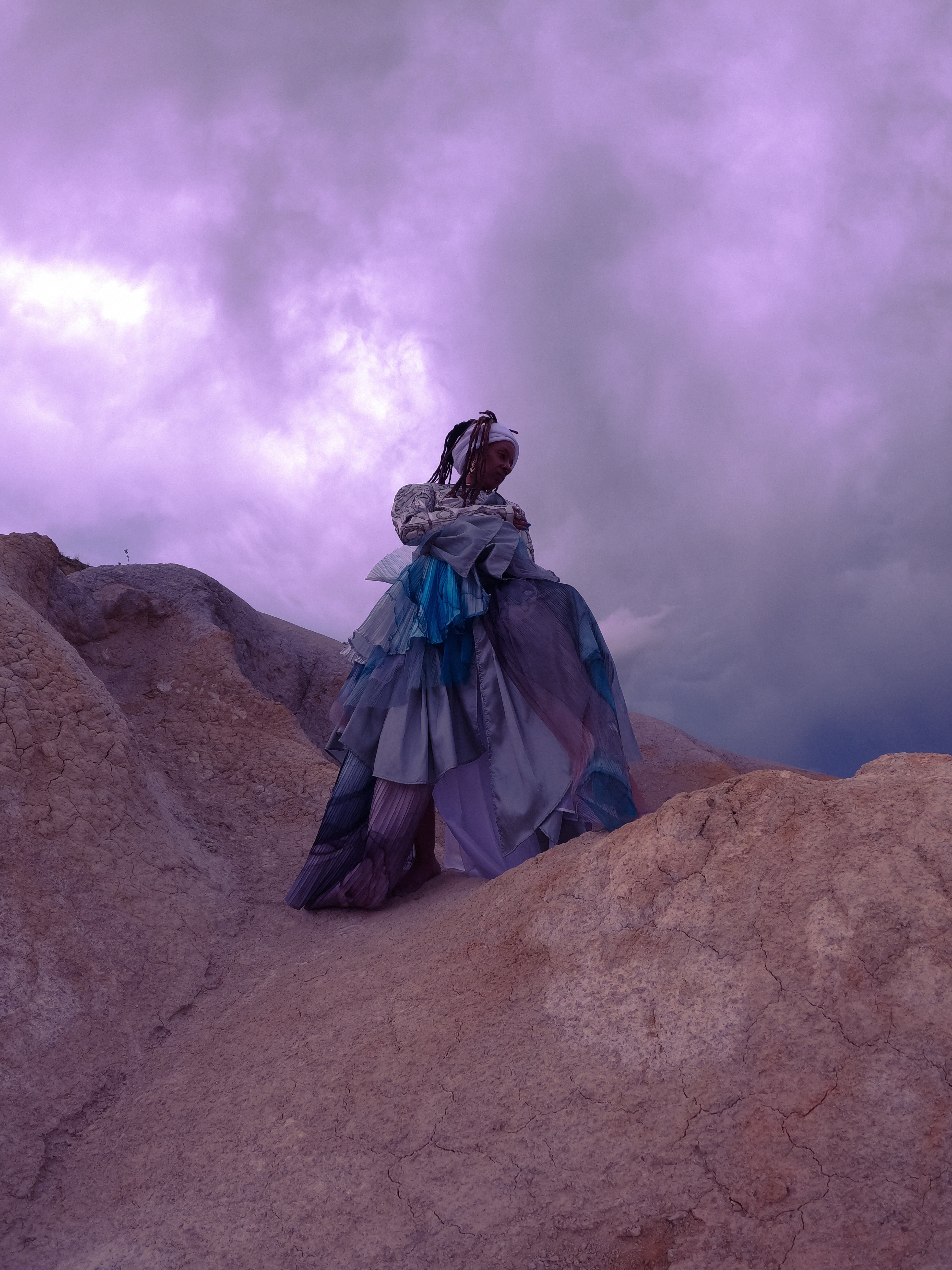 Looking to the future, EgoSHY will focus on rebounding from the pandemic and reconnecting with clientele. The need for social distancing brought about a general loss of interest in personal style. As a result, things slowed for EgoSHY. But EgoSHY is ready to help people reemerge into their best selves.

With the return of in-person events and gatherings there will be plenty of reasons to experiment with personal style. EgoSHY has taken advantage of the downtime by building its catalogue to better help people express themselves.

Hayes-Olubadewo’s goal is to make people feel confident and fulfilled as they reengage socially. By preparing a new range of clothing options, she hopes to help her clients regain their confidence after the prolonged social isolation.

“This summer we’ll be working on expanding our online catalogue of clothing and accessories as well. I’m very hopeful for the future! As retailers, restaurants and events begin to open back up, folks will get excited to dress up and go out again,” Hayes-Olubadewo said.

As the world transitions back to normalcy, EgoSHY will be there to help Denver look its best.