The new Oracles of the Pink Universe exhibit debuted on June 13 at the Denver Art Museum, featuring eight new works by South African mixed media artist Simphiwe Ndzube. A mural painted by the artist will temporarily sit in the corner of the exhibit and includes his sculpture Nguni Landing hanging in the center. 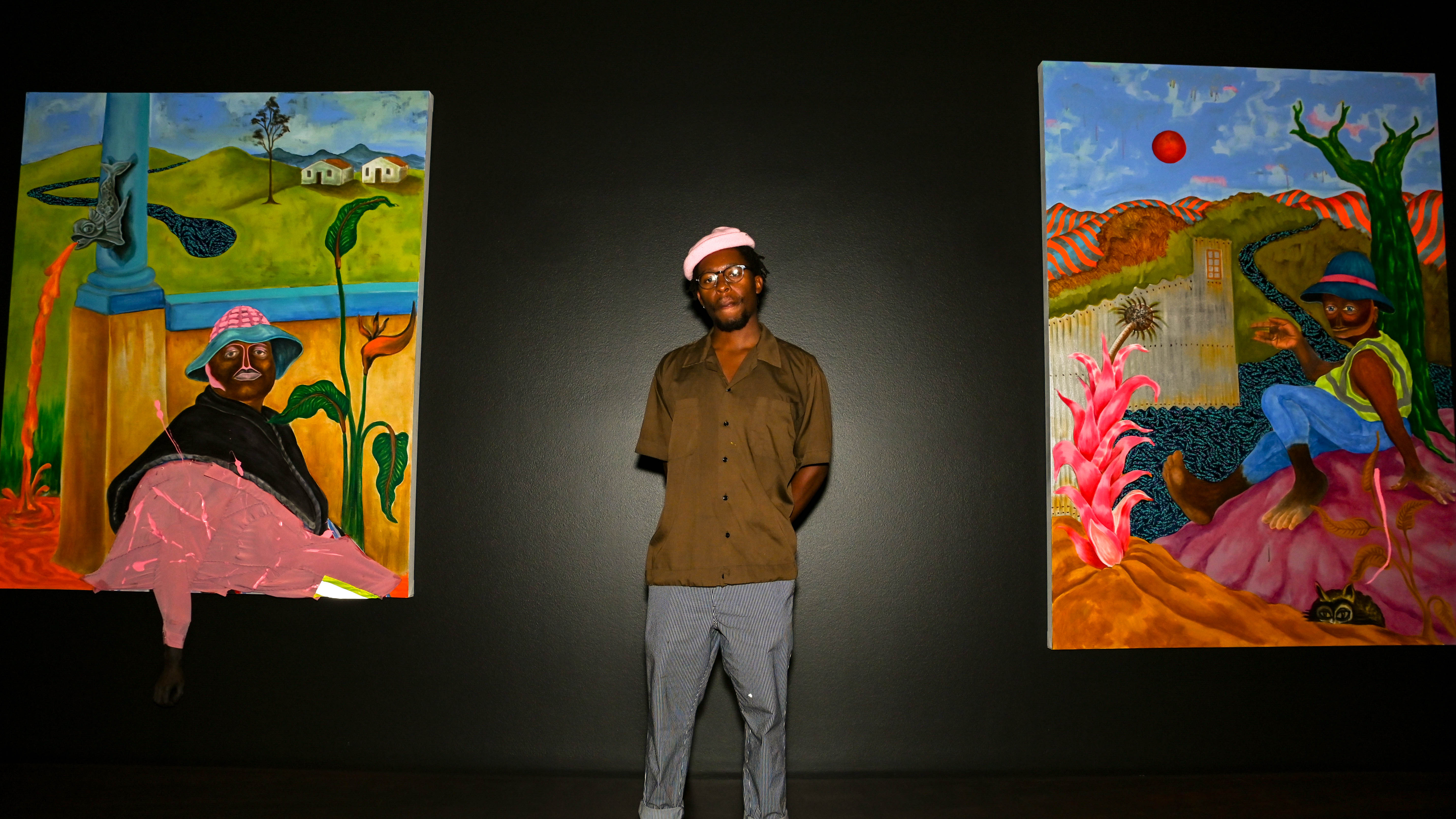 Ndzube’s work is displayed on a dark backdrop, in a dimly lit room with a whispering soundscape to give guests a trip through his imaginative world, the Pink Universe. “We wanted to create a black box for this exhibit,” explained exhibit curator Laura Almeida. “Because the pieces on their own are so bright and vibrant, a dark atmosphere brings them to life, and they become much more saturated.”

Ndzube strings between themes of violence and chaos that border lightness and beauty through his vibrant, varied palette and experimental depictions.

Growing up in the Eastern Cape province of South Africa, Ndzube fell in love and followed it to Los Angeles, where he currently resides and works. After visiting to give lectures a handful of times, he partnered with the Denver Art Museum to coordinate his first-ever solo museum exhibit in the United States. 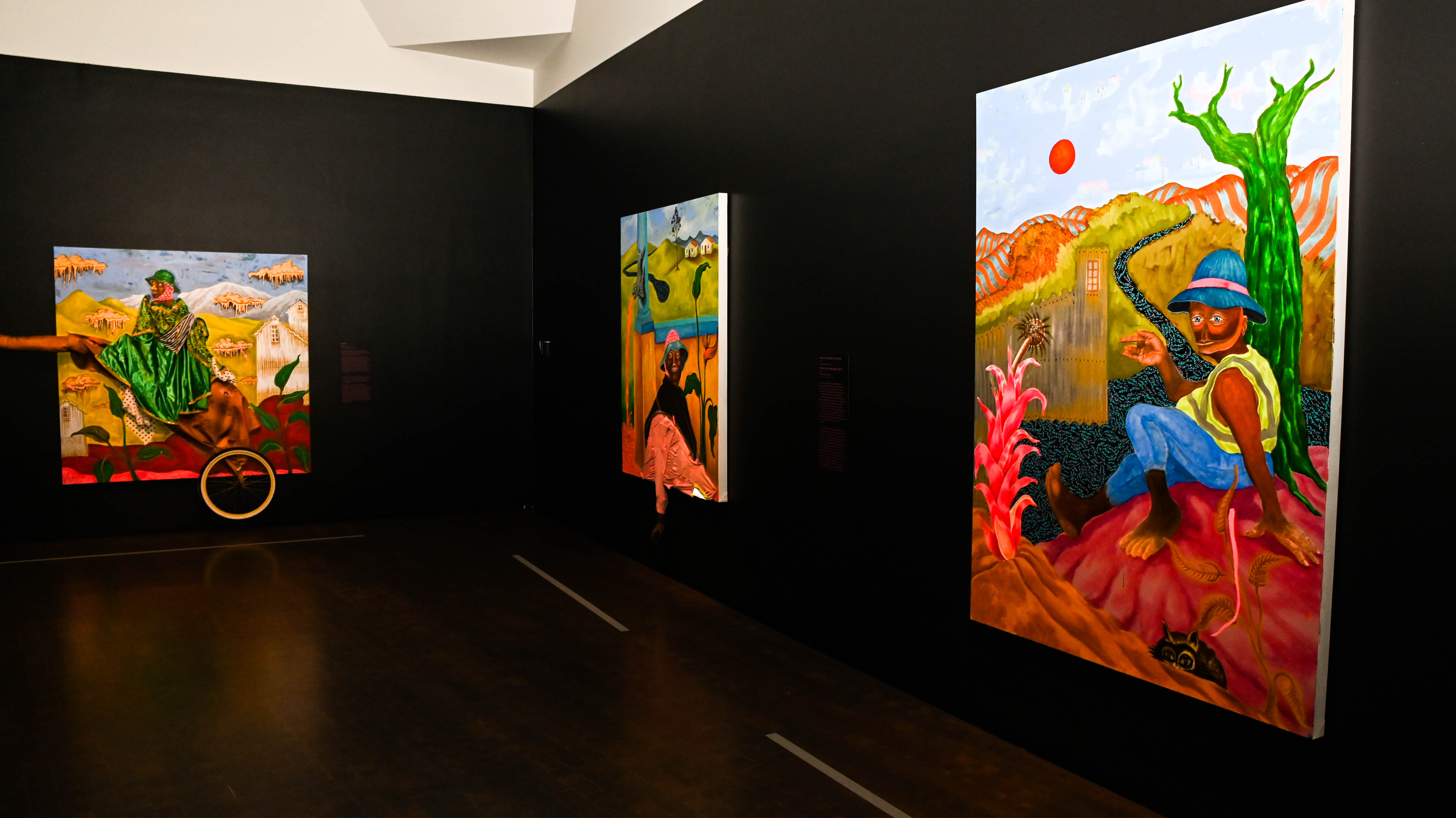 Lucious foliage and mountains ode to Ndzube’s hometown in many of the featured displays. Still, he pays homage to some classics and pulls inspiration from everyone and everything around him, including the main inspiration, Hieronymus Bosch’s Garden of Earthly Delights. But he’s handier and more personal with his work than Bosch; pasting cut-out photos of his own eyes and hands onto his subjects, stitching second-hand clothing on them and morphing physical sculptures with canvas paintings to build dimension. His novel style has received acclaim within the past few years for good reason.

Ndzube’s symbols and expressions separate his art from getting boxed into a single category. His “hybridized bodies” merge silicone limbs and body parts to depict cross-breeds of human serpents, birds and other animals as a reverence to human-animal relatedness and coexistence. Other prevalent symbols, like bloodshot eyes that hover above metallic, golden droopy clouds in The Bloom of the Corpse Flower – which has been acquired by the museum permanently – depicts a man drifting through disorder and disarray under trippy brass rain clouds. 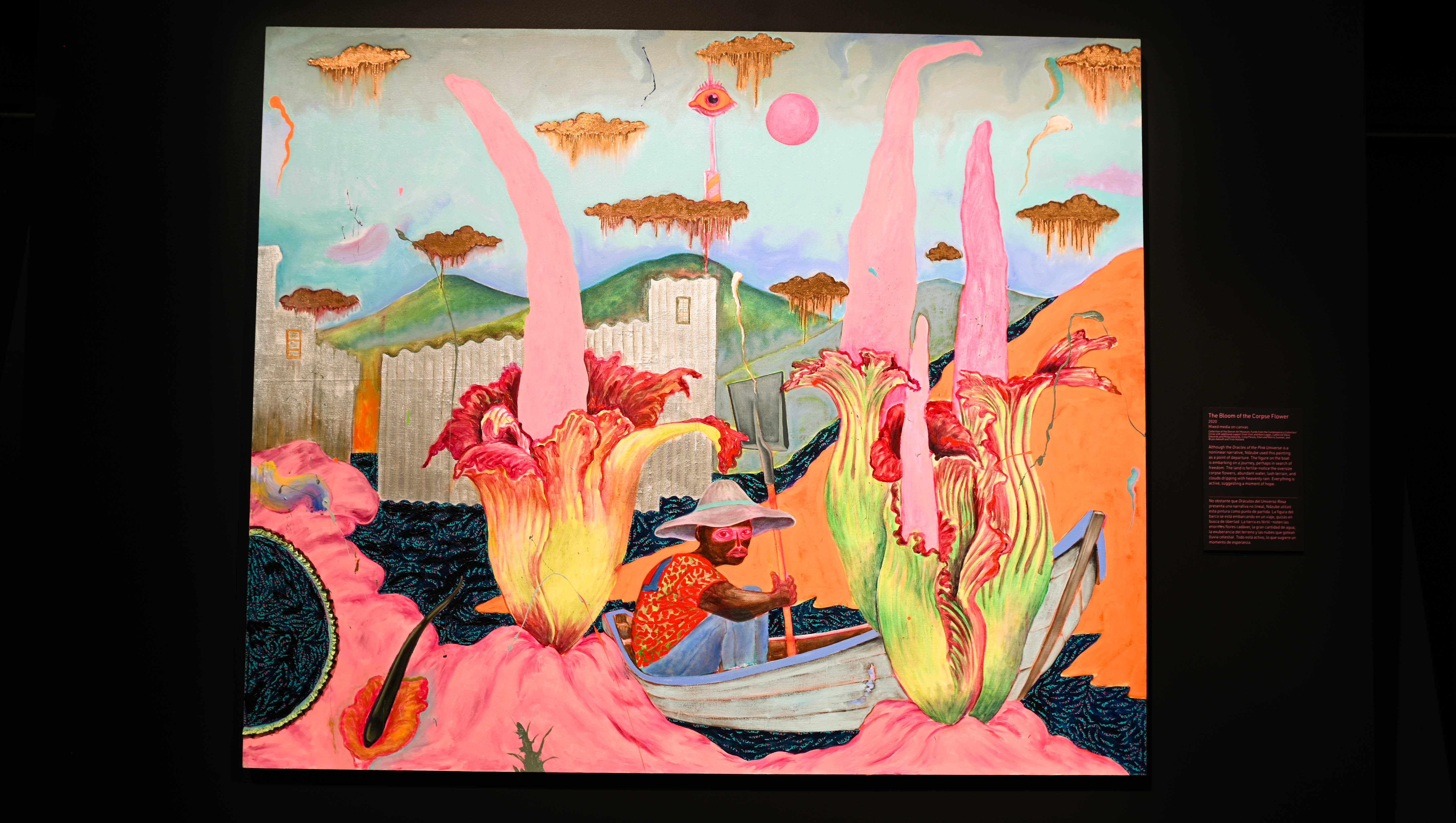 To Ndzube, the landscape is a focal consideration in his work – something where place and time interconnect to simultaneously uphold tragedy, oppression, beauty and sanctity.

“Landscape is contested with all sorts of ownership, excavation, exploitation and forced removals,” said Ndzube.

“It’s this place of constant tension. But, it’s so beautiful, so there’s a celebration to its beauty. I take those cues into how I think about the landscape, because it’s also a place of magic, full of positivity.” 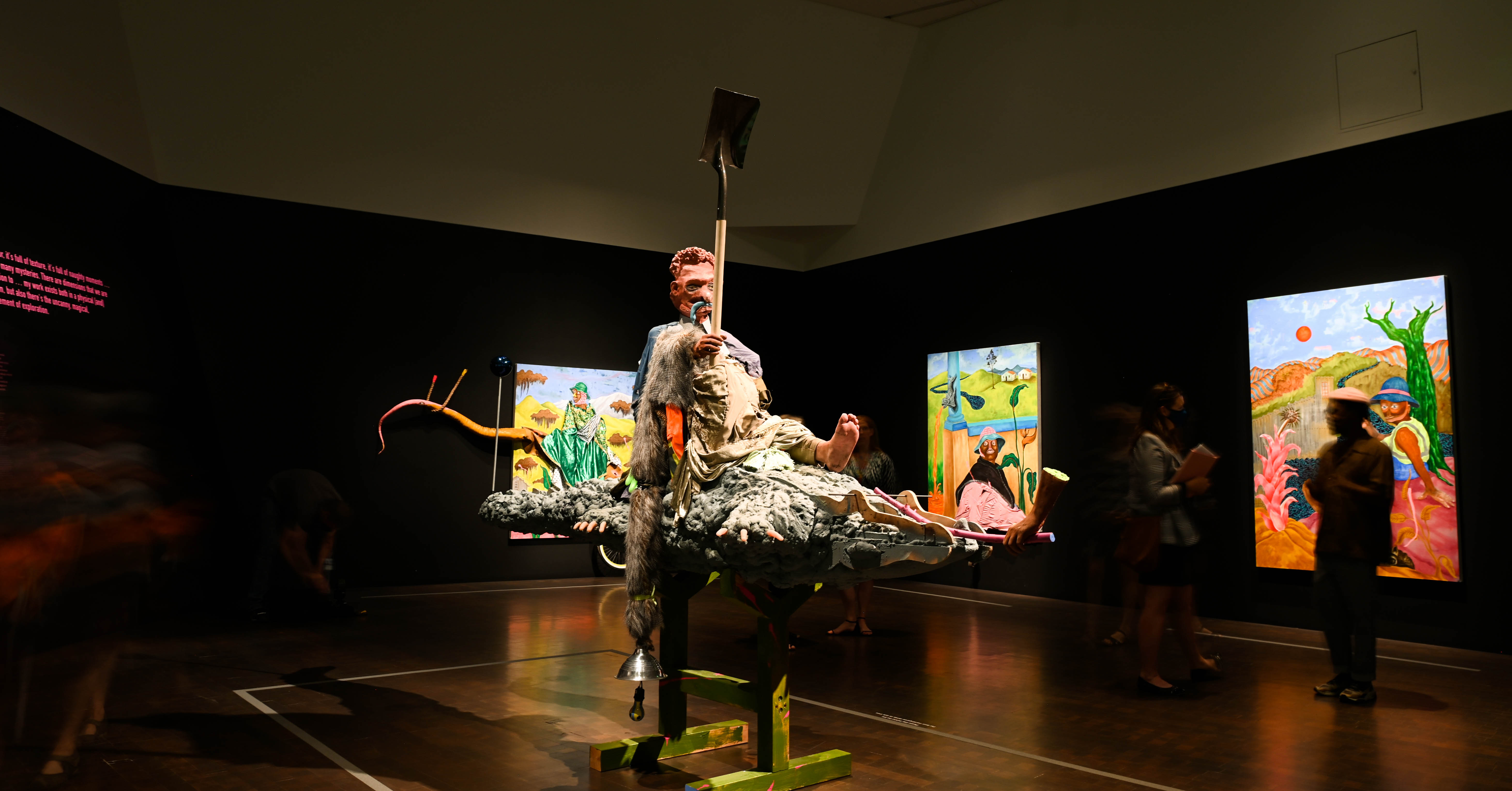 Pulling between freedom and power, Ndzube says the color pink symbolize skin, femininity and a fine balance between love, conflict and tension that bring the complexities of life to life in his art. But words – or photos – don’t capture the experience of seeing it in real life.

Oracles of the Pink Universe is on view until October 10, 2021. Tickets are included in general admission.