Youth activists gathered at the Colorado State Capitol on Saturday, April 17, to stand in solidarity with Daunte Wright, another Black man shot by former Minneapolis police officer Kim Potter on April 11, and to resist ongoing police brutality and systemic racism. The protests also follow the murder of 13-year old Adam Toledo, who was shot by Chicago police officer Eric Stillman on March 29. The Denver AntiFascist League also handed out invites for a solidarity event that occurred later that evening at Cheesman Park.

Organizers, allies and activists, led by high school student Ashira C., met at the front of the capitol steps around noon, with booths set up for sign making, free water and coffee and organizations that came out to support the movement. The event was monitored by a paramedic for safety and drew in protestors decked out in tactical gear.

Before marching down Lincoln Street, community activists (many of them high school students or younger) and one representative of the Young Black Panther Party, shared personal stories of hostile encounters with law enforcement, poetry readings devoted to the experiences of Black children and communities and orchestrated chants of “Enough is Enough” and “Say Their Names.” The crowd took a moment of silence for victims of police brutality.

As Derek Chauvin’s trial for the murder of George Floyd continues, policing and accountability in the criminal justice system lead the discussions. Speakers focused on the urgent need to divert more resources into marginalized communities, rather than on policing and punishment.

“Slave catchers, strikebreakers and class traitors. Historically in America, that’s the function that cops have served,” explained Denver Communists member Benjamin Cole. “In the south, it was the bands of slave catchers who were white men that would ride around in their horses and terrorize slaves that were trying to liberate themselves. Once you get into the Jim Crow era, those were the same folks that were adopted into the KKK and institute racialized violence. So, when we see the racial disparity and violence of the police, which is the whole reason why we’re here, it’s not a mystery. We can study history and look at where cops come from.”

Educator Torrence Brown-Smith gave a lecture on white supremacy that is center to meta-narratives around the criminal justice system and Black communities. 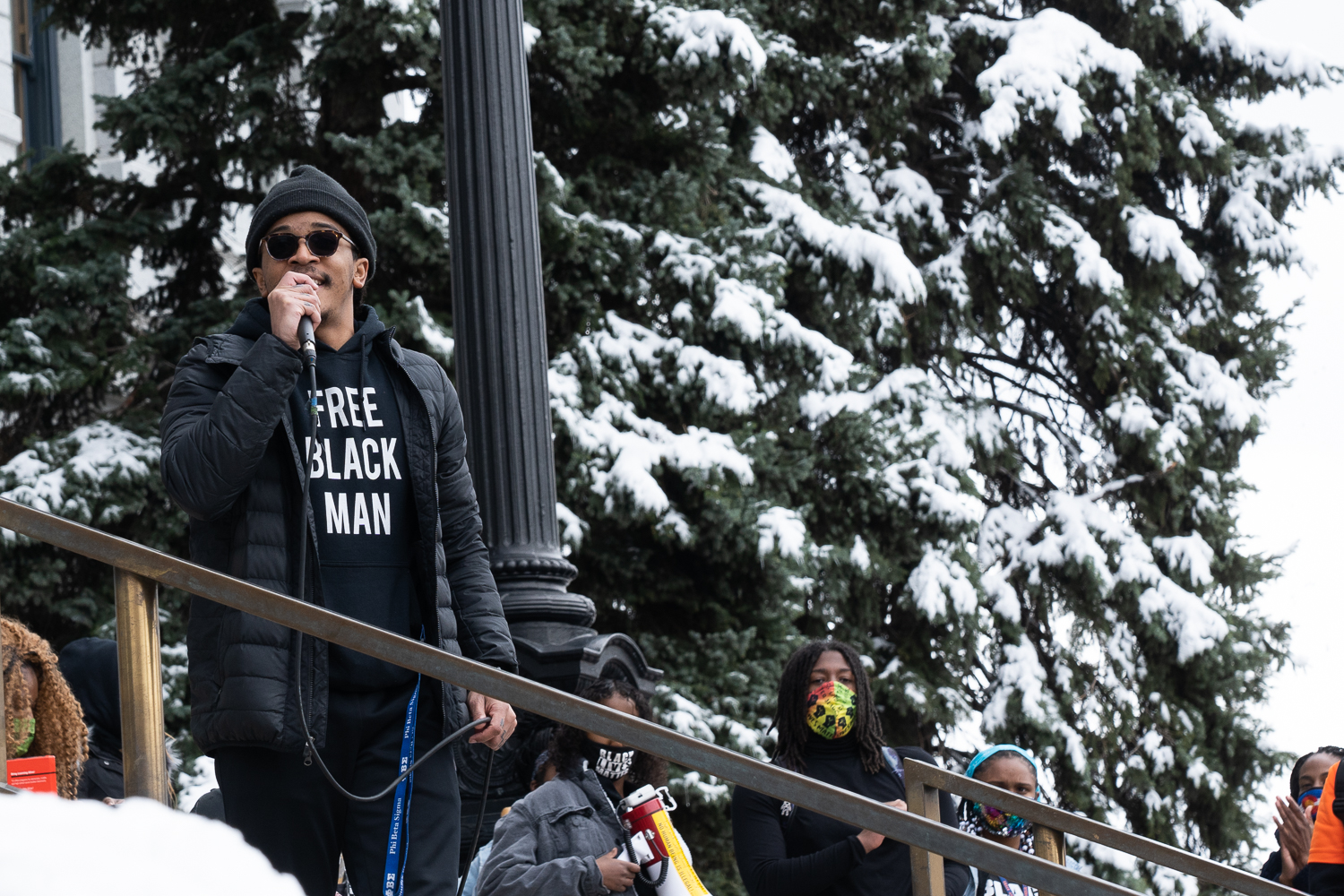 “All we’re doing is we’re restructuring funds and putting them in places that actually matter and benefit the people [i.e: education, healthcare access, housing, rehabilitation etc.]” Brown-Smith explained to the crowd. “As we can see behind us, there’s a fence around public property. When cops say, ‘we protect and defend’, well, we know what they protect and defend, and that is property.”

Brown-Smith used examples from powerful institutions, like the media and government, that propagate racist ideologies and language to describe Black people. Like the word “thug,” a term weaponized by politicians and even news coverage to justify murder, even in instances of police negligence.

“Breonna Taylor was asleep. The justification was that she should have never been dating ‘thugs.’ So, it’s her fault for ‘dating thugs’,” he began. “The narrative of Black folks is that our lives don’t matter. The narrative for white folks is that they deserve each and every opportunity. ‘White folks make mistakes, and they can get better. They just have a hard life.’” Since the eruption of protests last summer, the Black Lives Matter movement has been at a major turning point. Organizers and activists have been working tirelessly to introduce legislation and confront systemic issues. But, as Brown-Smith argued, to bring justice, peace and equity for the Black community, it’s critical that allies take the responsibility upon themselves to keep the momentum going and dismantle white supremacy. 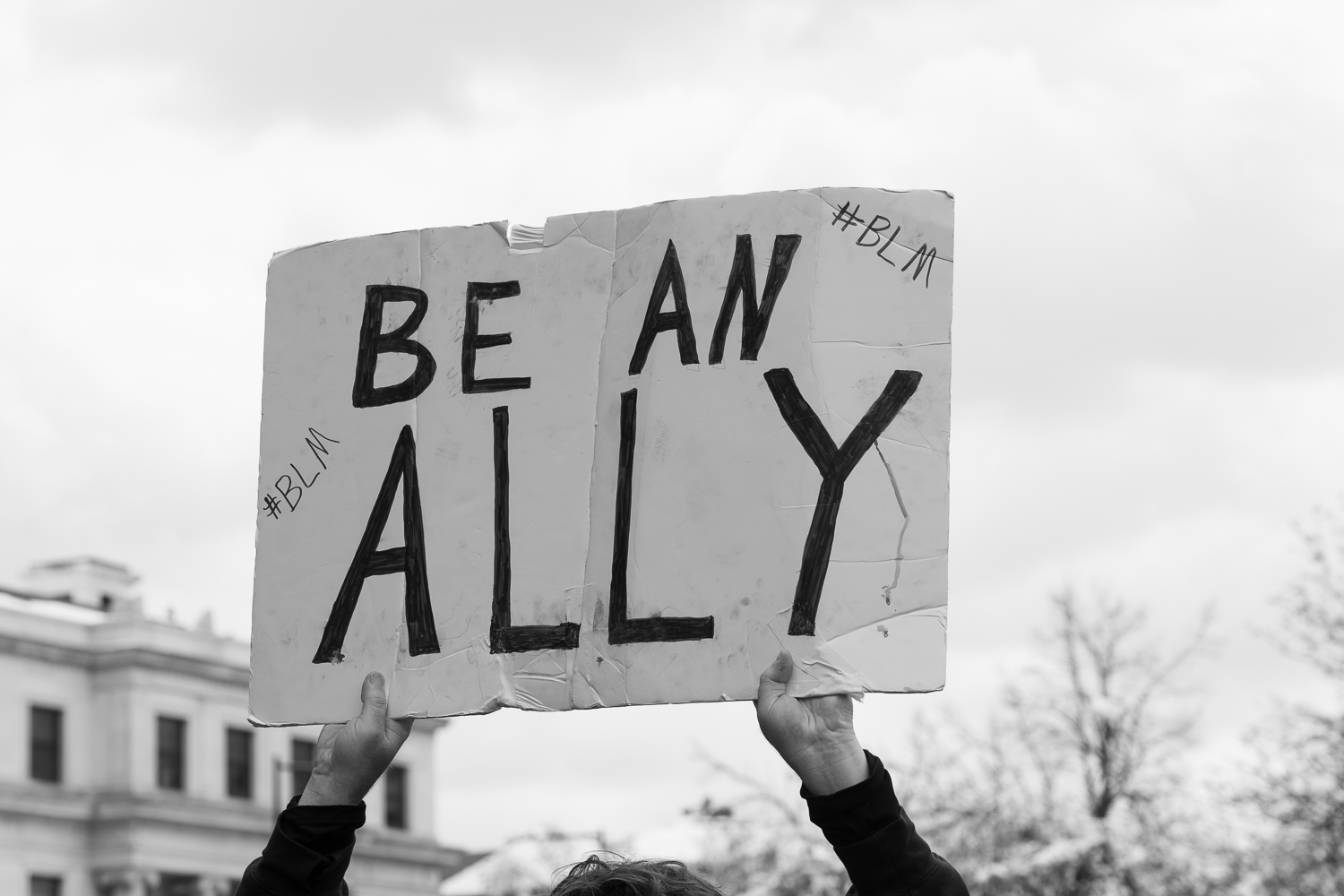 “The very real function of racism is to distract from the work of the people. As marginalized individuals, we can’t spend our time trying to prove our humanity. We don’t need to explain ourselves to anybody, and people who call themselves our allies or accomplices are the ones who have to do the work of unlearning, like deeply rooted unlearning, to really benefit the rest of society. Because liberation involves all of us. We’re all interconnected,” explained Brown-Smith.