Photo courtesy of the Fresh Fruit!

It isn’t often an artist delivers a project that clearly articulates their sonic vision and persona. That, however, is precisely what Fresh Fruit! delivers on their debut EP Independently. In just five tracks, the Denver-based psychedelic soul band captures a moment in time, between embracing liberating freedom and processing abandonment, all the while questioning what it means to be truly happy.

Like many artists, Fresh Fruit! was supposed to release a project last summer but decided to push it back because of COVID. This delay however wasn’t necessarily a bad thing according to bass player Kyle Loeffler. “The COVID process partially delayed it, but also kind of gave us time. Cause it wasn’t a huge rush to get anything done. [We could] really do it the way we wanted to and do it right.” After scrapping the original tracklist for their debut EP, they honed in on a new sound that more accurately represented their energy. 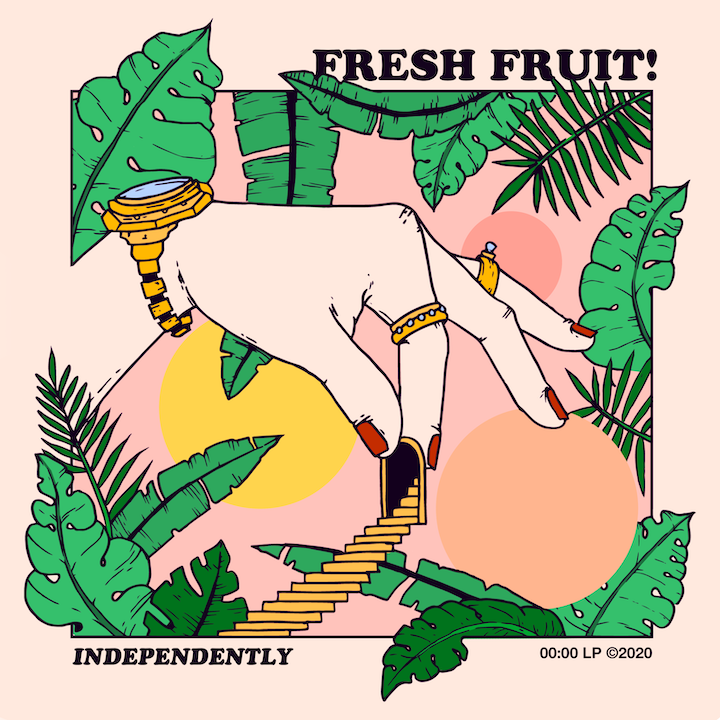 Since COVID started, the three-piece band including lead singer Ronan Dowling, guitar player Mitchell Gardner and Loeffler, recorded their music exclusively in a home studio. This decision was more than just a smart financial choice — their sound is directly influenced by this type of environment, according to Loeffler.

“We kind of have a fun, welcoming environment when we’re recording. And that ends up leading to a lot of mistakes that we like, or we keep — it’s a good environment to try new things. So, I think that’s kind of reflective of who we are as people.”

On the opening track “Independently,” Fresh Fruit! introduce themselves with a modern twist on ’80s disco-funk music that might fit perfectly in a playlist tucked between Rick James’s “Ghetto Life” and Midnight Star’s “Wet My Whistle.” “Hello tomorrow, goodbye yesterday,” Dowling sings as the band begins their artistic journey, celebrating their love for music and soaking in their youthful independence. As the EP moves forward, however, the audience discovers that these emotional highs are not easily maintained. 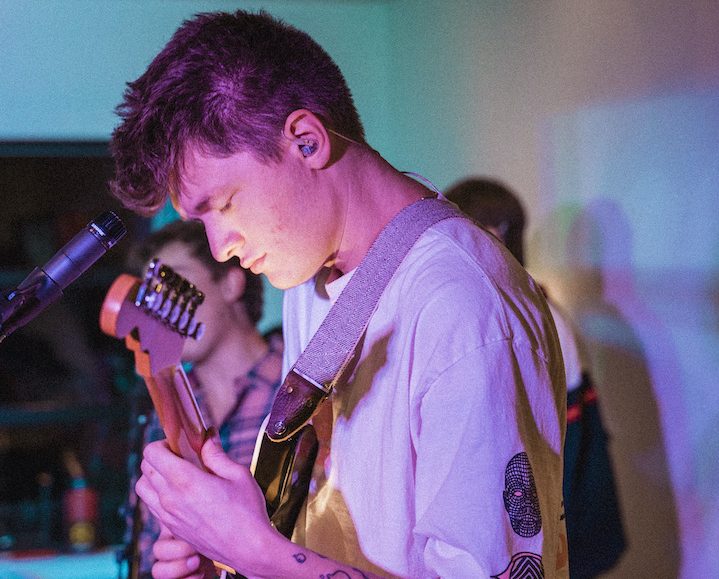 If “Independently” represents waking up on the right side of the bed, the second track “Can’t Stop Now” is a demonstration of adversity, embracing the struggle on the road to artistic success. For upcoming artists like Fresh Fruit!, quitting simply isn’t an option. “I love that the song talks about, not only that we won’t stop, but we can’t stop,” Gardner told me. “Like, it’s not in us. And I think that a lot of that is how we feel in the COVID time.”

The techno-blues, R&B jam is carried along by stylish island percussion, tropical bongos underneath an expertly crafted guitar riff, and the rising tides of various chimes and horns that create a contagious melody. The moody atmosphere caught between glowing palm trees and broken streetlights reminds the listener to pay attention to the lyrics — “the voices are getting louder, it’s getting worse every hour, but I can’t stop now.”

Despite the euphoria Fresh Fruit! experienced on the opening track, there are temptations lurking around every corner. “Can’t Stop Now” represents the anxious thoughts invading our minds as we drift off into a dream world, trading this life’s harsh reality for beautiful women and fancy cars— or limousines. The stripped-down, modern-funk sound of “Fancy Limousine” is more about a feeling than anything else. The band has entered a dream, their version of “paradise.” There are pink clouds dancing in the sky, flowers blooming from concrete sidewalks, and of course, a fancy limousine. The charisma on this track works perfectly for the tone of the music as Dowling slips away from reality. The back end of “Fancy Limousine” is particularly engaging, as vocal passages from singers, Amber and Cleopatra tempt the listener to abandon ship and swim with the Sirens. The passage was originally supposed to be sung by lead singer Ronan Dowling, but after hearing Amber and Cleopatra, he felt the world needed to hear their voice. “I was originally going to sing that part and then I was like, God, they sound way better than me.”

Up to this point, Independently has been a tale of youthful energy and adversity. The band, however, is no stranger to hardships and they remind the audience that pain is an unavoidable part of the human condition. “[Independently] is definitely a documentation of our lives and all of our experiences in the past few years, a lot of painful experiences, a lot of growth,” Loeffler said.

On the next track “Happiness,” Dowling jumps headfirst into the water, following the beautiful voices of the Sirens, drowning in his vices.

“Swimming in a pool of uncertainty, all the good things in life fading away from me,  I’m barely treading water, keeping my head above, being pulled down by temptations I can’t overcome.”

The cyclical nature of life is not underrepresented on Independently. After a trip to paradise on “Fancy Limousine,” Fresh Fruit! wake up to a harsh reality on “Happiness.” The alternative-funk vibe of “Happiness,” slightly reminiscent of Rex Orange County’s “Sunflower,” works well as an illuminating backdrop for some of the EP’s darker themes.

Life’s ever-changing circumstances shake the band out of their fantasy and remind them never to let their guard down. The band, in a state of confusion, were left to wonder where the joy they felt on “Fancy Limousine” and “Independently” disappeared to. Dowling petitions to regain his happiness through an exploration of unfulfilling vices.

“I’m choosing pleasure over happiness, lust over joy / treating your love like it’s some silly toy,” Dowling sings as he experiences a rare moment of self-awareness. Rather than one earth-shattering event, it seems that their happiness quietly slipped away while the sunshine was replaced with artificial light, the kind that induces a headache that creeps up without any definitive inception. 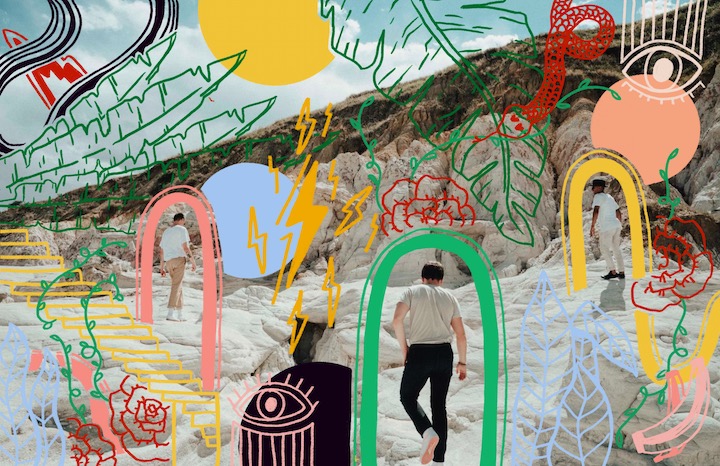 The closing track “Yellow (Was Yesterday)” is in direct opposition to the opening track “Independently” and puts Fresh Fruit!’s spiritual journey into context. For Dowling, yellow is more than a color, it’s a feeling. It’s a memory. It’s pain and it’s love. Yellow is many things, but above all, yellow is a state of being. One that got swept away by the sands of time and unfortunate circumstances. Derivative of a Beatles soft rock piano ballad, “Yellow Was Yesterday)” is arguably the most emotional song on the EP. A song for the brokenhearted, each note is laced with emotion. It’s a whirlwind of sentiments, as breakups often are. At times, Dowling dances the line between melancholy, reminiscence and a deliberate embrace of his new independence. Regardless, Dowling is determined to move on and find his new color. After all, he admits that “yellow ain’t for everyone.” 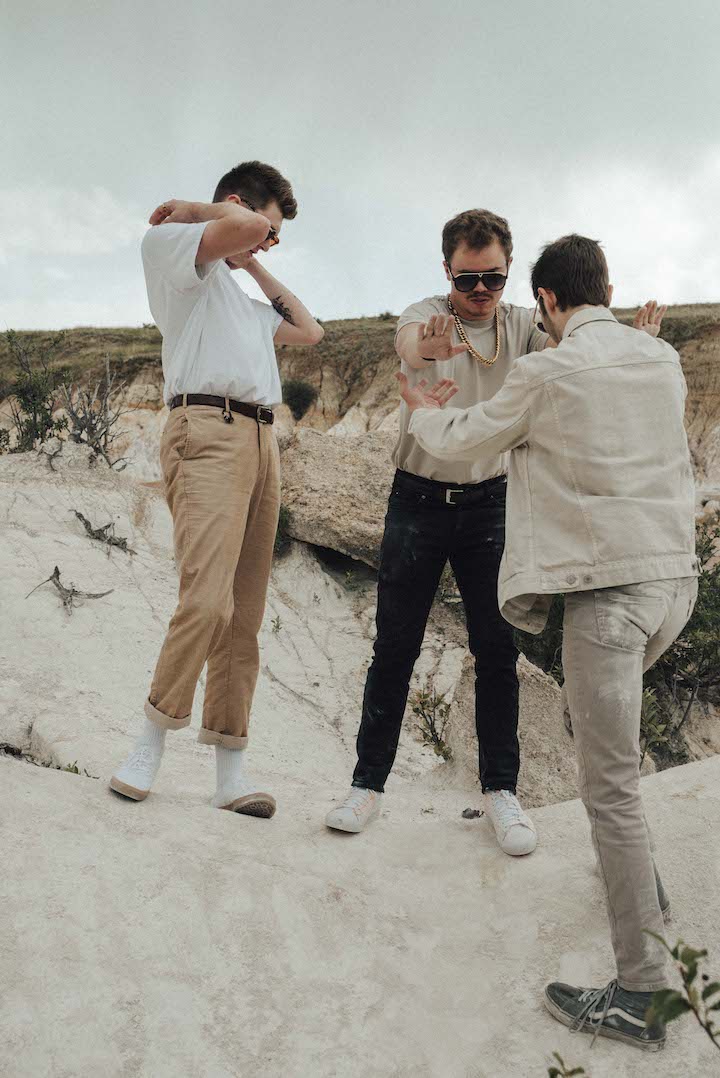 It’s been a long year without live music, and Fresh Fruit! is keenly aware of this as they prepare for their show at the Oriental on February 27th. Their first live show in almost a year, the band is gearing up for an exciting night. There will be nine people sharing the stage, including a horns section and singers Amber and Cleopatra. Although the band is spending most of their time preparing for the show, they assured me they are actively recording new music.

Afraid of creative stagnation, Fresh Fruit! plans on delivering a new and refreshing sound on their next project. “Our future projects are just going to be another representation of where we are in life. So it’s not going to be a constant theme. It’s going to be like ever-changing music. I think that’s what we’re trying to get across,” Dowling explained. Mitchell shared a similar sentiment, saying “this is what we did at this time. Let’s see what we do next time, you know?”