Photo Courtesy of the Artist

Deep Club‘s Ponyrok has released a new full-length album, titled Wolf Hour. His first LP in two years, “Wolf Hour” is a percussive, rhythm-focused batch of tracks that both simultaneously serve as handy club tools, but also can stand powerfully on their own as fully built-out compositions. Ponyrok helps operate Denver-based record label and party series Deep Club, but when he’s not busy helping put out the music of other artists, he’s busy piecing together his own tracks. Refined, yet variable in its range, Ponyrok has honed in a sound that draws from every direction — from dancehall to rave-adjacent techno to deep house.

The album starts off with the drum-focused track, “Trois.” Lo-fi drums plink as a sharp synth howls through over a distorted vocal repeating the title of the track. “Trois” is purposefully sparse, with each part allowed to reverberate in full. Subsequently, a sharp kick hammers all through the next track, “TASFJ”, incorporating breaks into an already-syncopated beat. A linear melody carries through the track, ornamented with subtle oscillations and supported by a squishy bassline that appears midway through the song. Shortly after the bassline enters, syncopated hi-hat cuts in and really propel the track’s momentum. A faint swell washes up in the distant background towards the end of the song.

Muted piano chords more adjacent to a minimal techno/deep house style start the next song, “Beyond B.” Ponyrok still injects his flair by stepping away from the classic four-on-the-floor beat of techno. A futuristic modulating melody cuts through, while an oscillating ringing sings in the background. The padded chords slowly work their way back in, slowly combining that deep house sound with acidy machinery — without getting too noisy. If anything, this track sounds a little too constrained, as if Ponyrok may have been a little shy to let the track build to a howling wall of noise. However, by doing so, it kept the track closer to the club and further from the rave. Those Scott Grooves-esque chords echo out towards the end of the track, bringing it back to full circle. 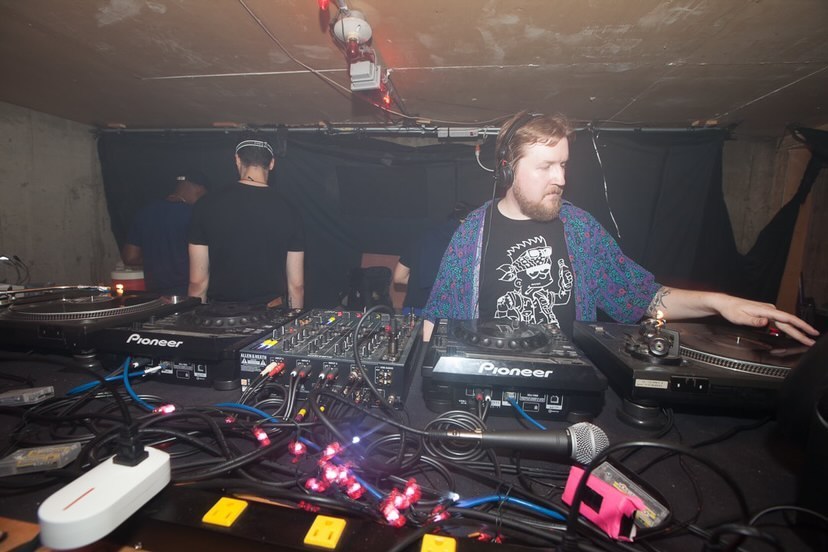 Ponyrok spinning at a Deep Club party. Photo courtesy of the artist

Corrugated whistles begin “2-LT,” and quickly layers on new elements. Many new sounds entering the fold come off so soft and subtly that they’re initially hard to notice, but before long, they gradually transform into stronger pillars holding the song up. A pulsing bleep slowly turns into a single note that decays and unfolds, then slowly returns back, standing out in prominence over the rest of the other sounds. Like the shape of the waves carrying this song through the air, the various synth lines ebb and flow, swell and sink.

A gentle melody and snappy snares introduce the next song, “Bless This Mess.” Ponyrok returns to starting the track off with drum fills, and the light synth line, coupled with a padded bassline, is reminiscent of Shanti Celeste. Warbled vocals later add to the melody, continuing the consistent musical motif throughout the entire album. “Missing Link” starts off with chopped up vocals that set the rhythmic tone, with tinny percussions building over it. Sparse padded chords navigate the beat — softened but still rough around the edges. The track feels as if it was building to some grand wall of sound, but Ponyrok instead subverts the listener’s expectations and teases —  keeping the song in suspense for its entirety.

“False Teeth” follows, adopting a more raving tone from the start, yet Ponyrok chooses to let the crunchy, harsh sounds bounce around not allowing them to gain much momentum, keeping them tethered to a neat and compact pattern. With the energy constrained, slight swells and tweaks stand out in sharper relief. Like the previous track, “False Teeth,” feels as though it was building to something much louder, but instead opts for sustained suspense.

The aptly titled “Slinky Blues” is truly mesmerizing — as are all the tracks on this album, but this one, in particular, is comprised of hypnotic synth chords that marble and warp, vacillate up and down, to create a constant fluid movement throughout the entire song not unlike a slinky flipping down a flight of stairs.

The album ends with “Shaka,” wherein a mostly untouched vocal sample plays out in full. “The music is also visual, it’s not only what you can hear — it’s what you can see,” says the sample, a resounding rumination of Wolf Hour itself. The vocal melts away in a puddle of reverb and into a 90’s Brooklyn hip-hop style boom-bap beat. An exclamation morphs into a saxophone and the melody is mirrored by the bassline, which sounds like a lo-fi recording sample of an upright bass. “Shaka” is a nice, jazzy outro to a record that centers the weight of rhythmic percussion.

“The Hour of the Wolf,” according to Ponyrok, refers to the hour between night and dawn — at 3 a.m. — “when the sleepless are haunted and ghosts are their most powerful.” For Ponyrok, Wolf Hour is as much a reflection on the memories of the dance floor as it is a celebration of the music culture itself. The record represents, as does the hour of the wolf, a moment that straddles the memories of the past and the unfolding horizon of the future.