This is the fourth story of the ongoing series Deep Cuts, which highlights a local DJ here in Denver every month. The series includes a profile on important underground DJs around Denver as well as a playlist of five of their current favorite tracks.

“Somebody put a record on! Any record, just put something on,” Ryan Scannura shouted over his shoulder to the group of friends cloistered near his turntables. It almost seemed as if the silence between songs made Scannura squirm — as if a moment spent not listening to music was a moment wasted. And considering the rate, and speed, in which Scannura manages to cop the newest underground dance music releases, it makes sense that he could not afford to forfeit even a single second to silence.

Scannura moved to Denver in 2011 for graduate school and over the years has grown to be a valuable asset to Denver’s underground dance scene. Not only has he rightfully earned a reputation as one of Denver’s most proper house DJs, in 2015, he launched the local deep house and techno record label Deep Club which just recently put out its fifth release earlier this month. All of Deep Club’s releases are pressed on vinyl, and the label boasts a varied discography of deep, grooving house and hard-hitting techno.

“I like to keep my records organized like a library,” and Scannura meticulously looks after his vinyl collection with a rigid regimen. He raises the blinds of the windows near his collection only at certain times of the day when the sun’s rays won’t fill the room and warp his records. He polishes each record before playing them so that the needles of his Technic SL-1210M5G turntables won’t get caught on dust and skip. He demonstrated the proper way to hold a record — by the very outmost edges of the vinyl as to avoid smudging the imprinted grooves. And, in the event that Scannura would be playing his records outdoors, he emphasizes the effect of wind on the turntable arms. Scannura said, “Some DJs will prop up a flight case, or even just pieces of wood or cardboard, to block the wind. Really, anything to protect the arms,” from skating across the record and damaging them. 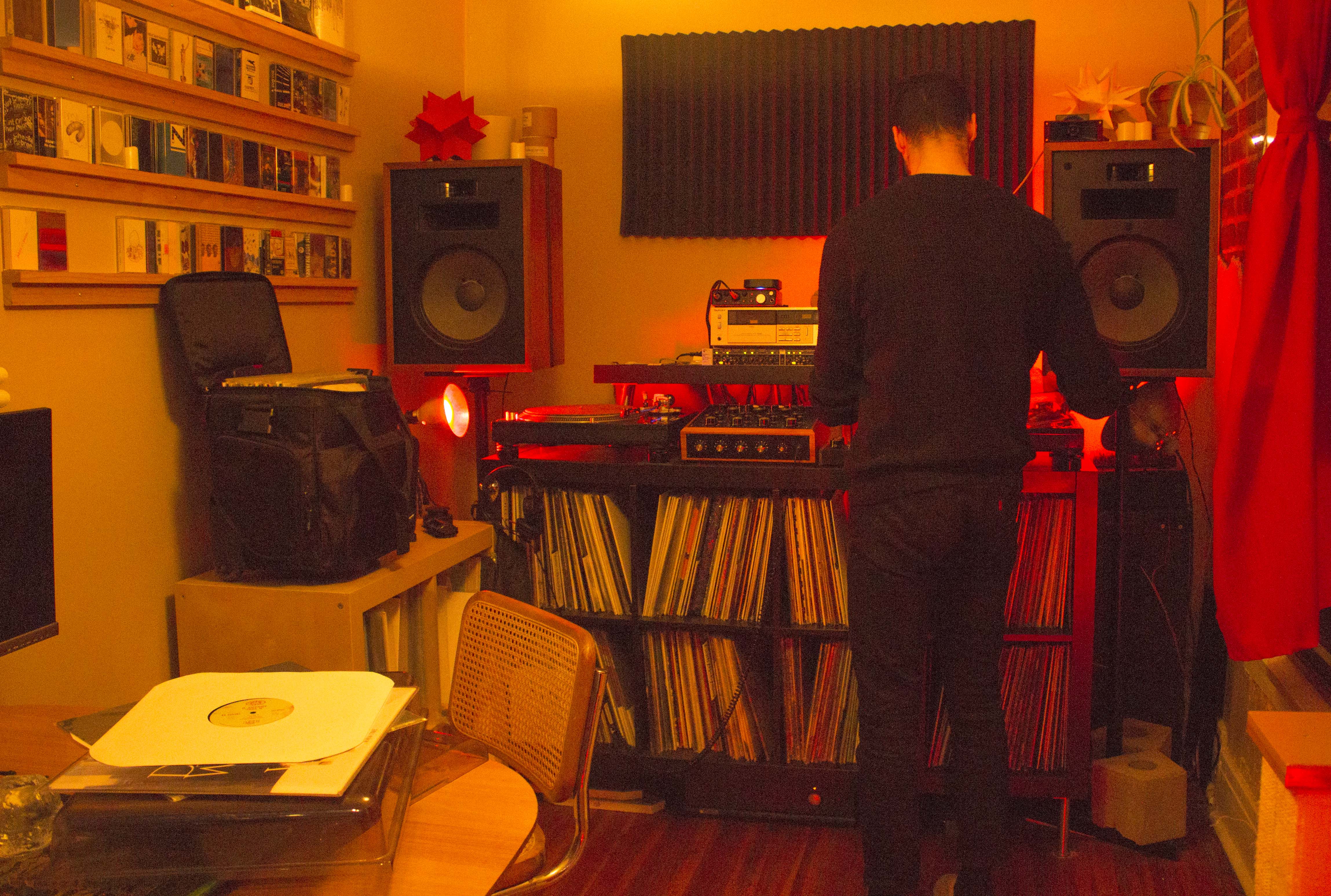 Scannura plays some records on his home studio. Photo by Padideh Aghanoury

“Mixing is how I listen to music,” Scannura said. Most of his collection is vinyl, and playing each new record through the Technics, which feed into a Condesa Carmen V rotary mixer and amplified by a cozy studio system, serves as an interactive way of engaging with the music one has purchased. Mixing records into each other feels like a natural evolution of listening to music, pure and simple.

Scannura’s favorite spot in Denver to throw down a DJ set is the 1010 Workshop, a DIY space that fell victim to the police sweeps of DIY venues following the Ghostship Fire in 2016 where 36 people perished in a building that was not up to city code. Denver’s DIY scene was hit particularly hard, and the scarcity of DIY spaces and warehouses in Denver is putting a significant strain on the underground and independent art and musical landscape of this city. Scannura uses a Xone 43 mixer when he plays out in Denver, but he hopes to one day bust out the rotary mixer. According to Scannura, the transitions come out smooth as butter compared to a fader mixer (like the Xone). 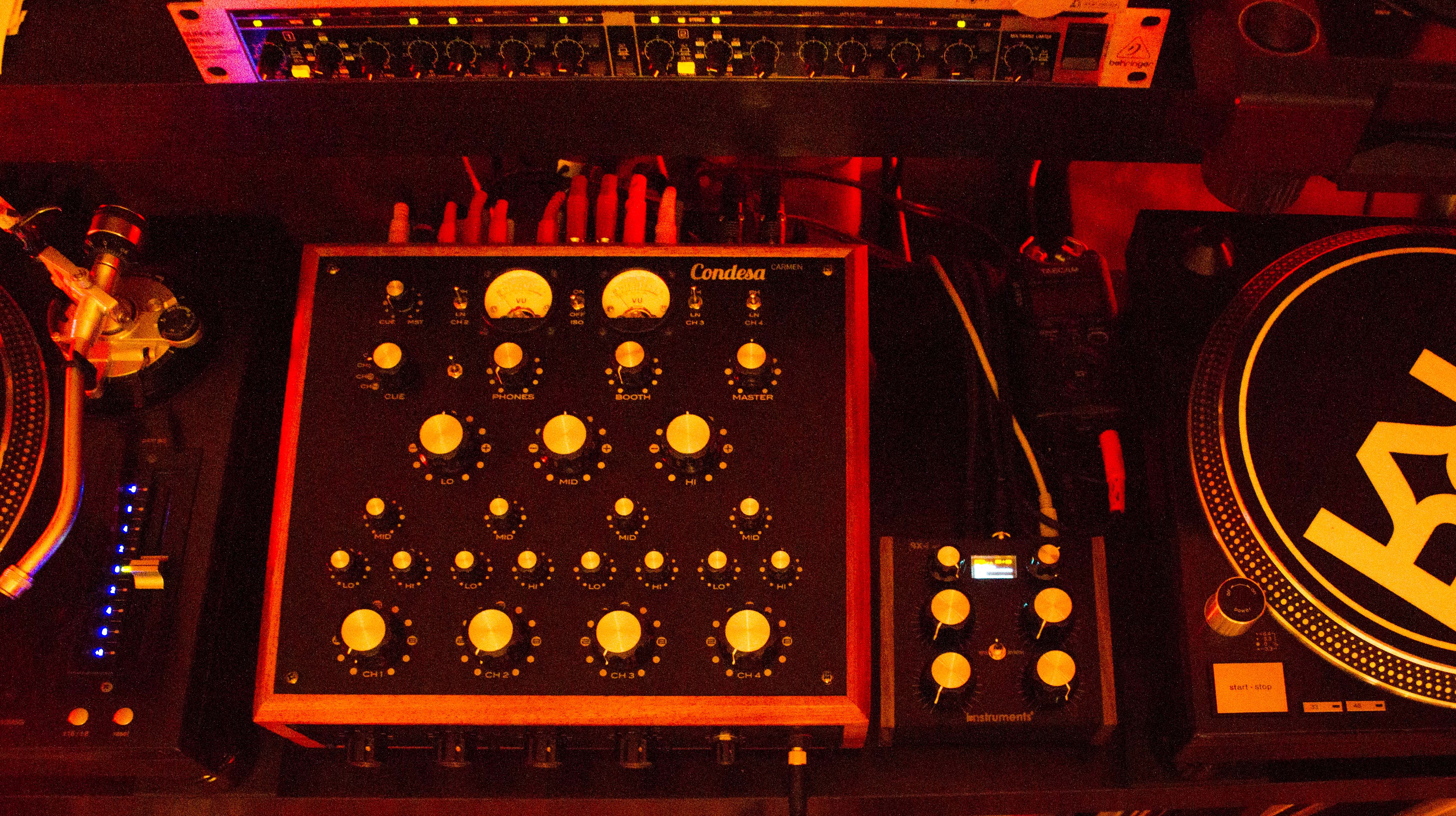 A Deep Club cassette compilation sat on a shelf above Scannura’s record crates. “We gave those away for free at one of our parties,” Scannura explained, “The first, I think, fifteen people got a copy, and then the last fifteen people on the dancefloor also got one too.” Offering free cassettes to the dedicated dancers who stuck around long enough for the last DJ set is a clever way to maintain a night of partying, as well as have support for the DJ closing the night. And in terms of what makes a great DJ set, Scannura believes a balance between variety while keeping the party fun are both equally important factors. “People work all week at a job they probably don’t like and want to go out and just let loose. Being challenged [by a DJ set] is probably at the back of a lot of people’s minds, like, ‘Oh I hope I hear some weird shit tonight,’ but that’s in the back of their minds. At the forefront, they’re probably thinking, ‘I wanna get fucked up, have a bunch of fun and hopefully get laid,’ and as a DJ, I don’t want to forget that,” Scannura stated. Keeping the cuts underground is a crucial element of a DJ who does their homework, but banging out an anthem here and there can stoke the party’s flame.

Scannura contemplated his five top picks at length as he sifted through a crate of his most recent listened-to records. As he pulled each record out, he explained in great detail the label, year, catalog number and provided context on the artists themselves so we thought it only appropriate to list out the five choices this month as well. Despite the volume, Scannura was deeply familiar with each and every single record he owned and it showed.

Scannura’s first selection is a track off of the 1995 release, “Party Time,” by C.V.O, which came out on Chicago House label Balance Recordings. Scannura’s selection is the first b-side track, “Mighty Real Groove.” C.V.O — an abbreviation of the phrase “Chicago’s Very Own,” is a side project of classic house staple Glenn Underground, whose production style toed the fine line between deep house and disco.

Marie Davidson’s “Work It,” from her 2018 release Working Class Woman on Ninja Tune, served as Scannura’s second selection. “You wanna know how I get away with everything? I work. All the fucking time. From Monday to Friday, from Friday to Sunday, I love it. I work,” Davidson chants over the cymbal rides, analog bells and drum machine claps of the acidy techno track that quickly became a favorite of DJs around the world.

And it seemed this track resonated deeply with Scannura, who works as a Clinical Research Coordinator of Oncology at the University of Colorado Anschutz Medical Campus on top of running a record label. Responsible for A&R to vinyl pressing and distribution as well as promotion, Scannura manages to work around his demanding 9-5 schedule to help put out absolutely fantastic underground dance music from artists both here in Denver and across the country, an impressive feat worthy of recognition.

Selection number four is the b-side, “The Klan Revisited (Kemeticjust Remix),” off of the release The Klan Revisited. Released on the Detroit label Musicality Records in 2015, this record by the Sunlight Project invokes lounge-y vibes through the live instrumentation of a jazz flute, live bass guitar and crisp bongos.

Outside of pressing vinyl, Deep Club throws parties around Denver and run a monthly podcast featuring mixes from the Deep Club roster. Tune in for some deep grooves here. For a limited time, Deep Club is offering a bundle deal of three records for $25, which is available here.