The music industry has always been a high-stakes business, with some artists playing for free while others earning $100,000 a gig. Nearly unfathomable amounts of money are thrown at festivals, shows, marketing, distribution and the list continues. When COVID-19 hit, unfortunately, the entertainment industry took a hit as one of the first industries to shut down and one that has yet to find a sustainable way of rebounding. However, one company might have found a way to revive festivals and raves while navigating the novel coronavirus that has wrought havoc across the entire globe. CoClubs, which runs venues Club Vinyl, Bar Standard, Milk and a few others have organized a new kind of festival. The Acoma Street Project is a social-distanced art walk, live-stream and the closest we can get to a real concert — all while staying as safe as possible.

“We want to show the rest of the country how to have a safe event,” said Brennen Bryarly, the talent buyer for CoClubs and founder of  TheHundred Presents. “People are throwing sketchy parties all around and we want to show that you can throw an event that is safe.” 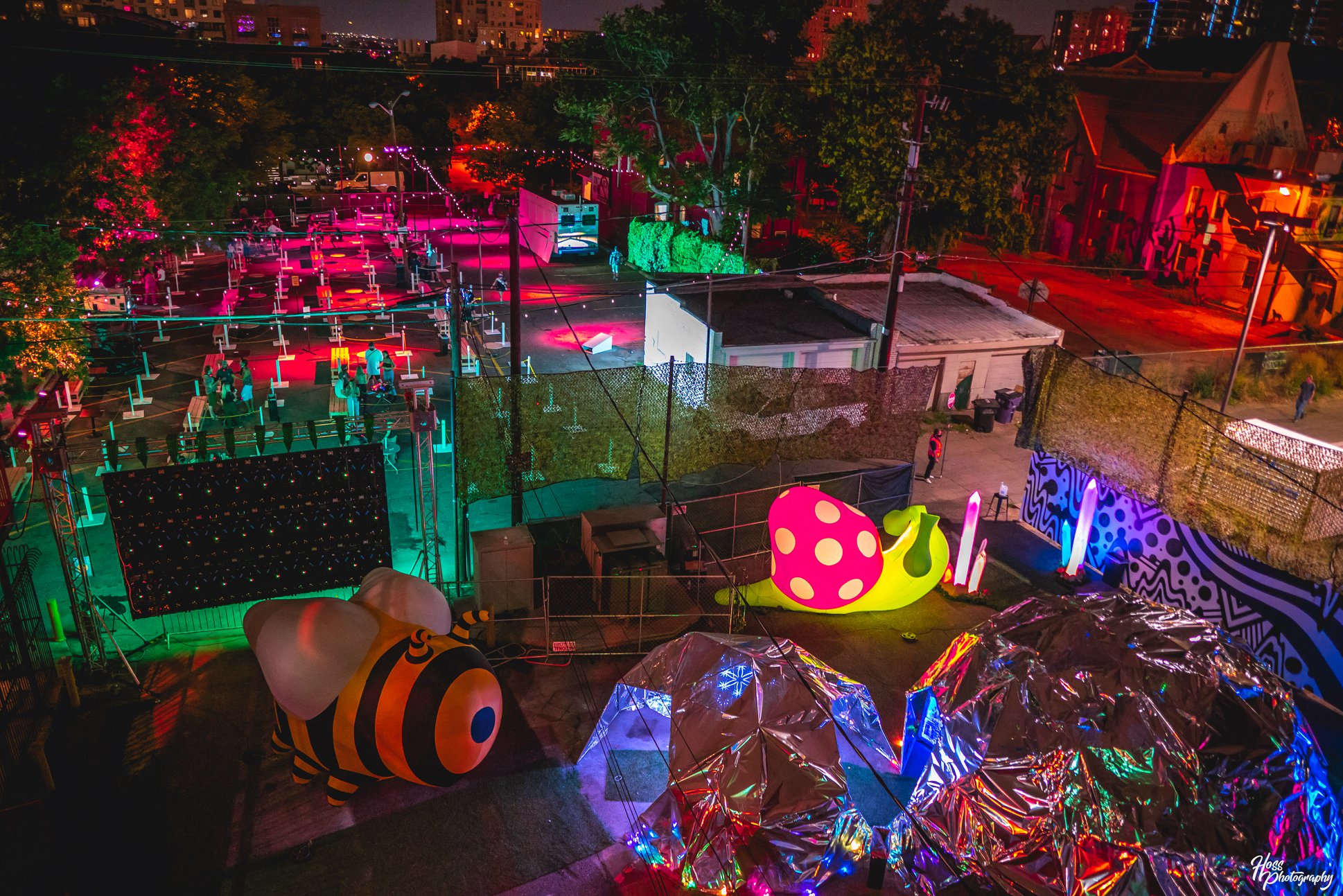 The Acoma Street Project takes place in the alley between Acoma Street and Broadway right by the entrance of Milk Bar. Several benches and tables sprawl across the courtyard towards Acoma Street, each spaced six feet from each other. Guests are required to remain seated unless heading towards the restrooms or checking out some of the other features, and masks are mandatory for walking around. In the courtyard next to the back entrance of Bar Standard, several geo-domes filled with psychedelic visuals caught many guests’ eyes. A live painter sat perched at their easel, scrawling away at the canvas. As one rounds the corner and heads up the stairs, they eventually come across the small landing where the local DJ is spinning. Laid out through the third floor of Bar Standard is the art walk, which features several local artists who work with LED lights and projected videography.

Outside, a massive outdoor screen projects the local DJ playing on the balcony. The headliners are not in-person performances, rather, they record an exclusive live-streamed set that then gets projected on the massive screen. Moon Boots headlined on September 13, overlaying artistic images of the moon and textured graphics over his recorded set filled with nu-disco, upbeat keys and funky grooves. Local DJ Chris Kennedy opened the night up in-person with a two-hour set of energetic house, squelching acid bass-lines and juicy cuts of disco. Kennedy DJs frequently around Denver and hosts a show on the Guadalajara-based radio station Internet Public Radio.

The event kicked off its first weekend on August 20 and each weekend has evolved. “I didn’t really want to go public with this at first because I didn’t know if it was going to even work,” said Bryarly. “It’s a live-stream venue, it’s an art walk, it’s a restaurant, it’s just a combination of a million things.” But now that the event has had a few weekends to iron out any last-minute issues or adjustments, artists are starting to reach out and ask to play, according to Bryarly. “My life is starting to almost feel like it did before [the pandemic],” he said.

Right now, the entertainment industry is in survival mode. In order to sustain itself, all the participants, from artists to food vendors to venue operators to attendees, need to be malleable to shifting plans. Like building a house on top of quicksand, stability isn’t guaranteed, but Bryarly certainly has the capacity to think quickly on his toes. “Claude VonStroke played opening weekend, and it was the first night I think where we had everything go smoothly,” Bryarly said. “We were having a hard time trying to prevent a lag between the live-stream and the headphones,” but after a few runs, they were able to sort out the issue.

Bryarly’s eyes glimmered with pride under the swirling lights of the massive, colorful production. “A lot of people think that parties are about music, but they couldn’t be more wrong. It’s about the culmination of people experiencing something together at the same time in the same place,” he said. “My best weekend last year, I think I sold something like 40,000 tickets for events I had booked, but I’m more proud of [the Acoma Street Project] than anything I’ve worked on.” Bryarly explains the moment all this work felt worth it — “The DJ was on the mic a lot during his set and you’d hear the crowd whooping and hollering, and for a second there it felt like a real show. I got to forget what’s going on in the world for a moment.” At the end of the day, isn’t the point of experiencing music live is to forget one’s surroundings and to feel fully lost in the moment? 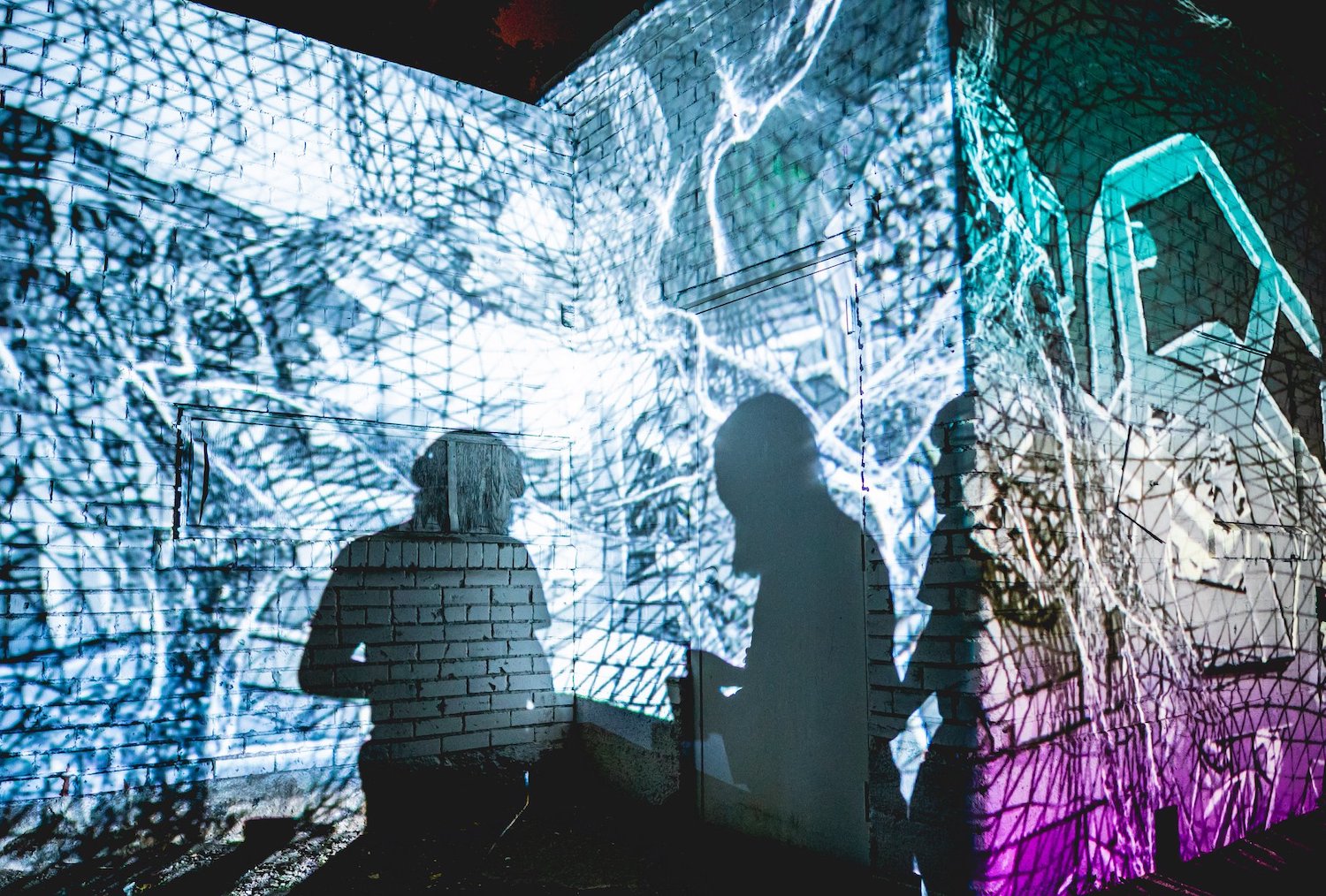 Continuing through the end of October, the series will culminate with a special Halloween bash. Bryarly expects to drop the lineup for the rest of the events within the next two weeks. “We gotta enjoy it while we can because winter is coming,” he said with a laugh. Bryarly keeps it vague in regards to winter plans but has a few ideas brewing in his mind. “Right now I’m sourcing a few partnerships with brands that make sense. I want to work with the right brands that fit what we’re trying to do. Anything Colorado-centric, I’m very open to,” he said but remained tight-lipped about what’s in store for winter.