[Update August 3 at 1:10 p.m.: In an email sent to all Colorado employees, Rebecca Block, vice president for Buffalo Exchange Corporate, offered free counseling sessions and assistance through resources and referrals for child care, legal consulting and financial hardship. Block also extended an employment offer to anyone interested in relocating to another market.]

In an open letter from Buffalo Exchange Corporate Vice President, Rebecca Block, the secondhand fashion brand responded to ongoing allegations regarding harassment, assault and discrimination committed by the now-removed owner, Todd Colletti. Effective immediately, Buffalo Exchange’s relationship with the Colorado franchise stores is terminated and all rights to the brand and name have been revoked. 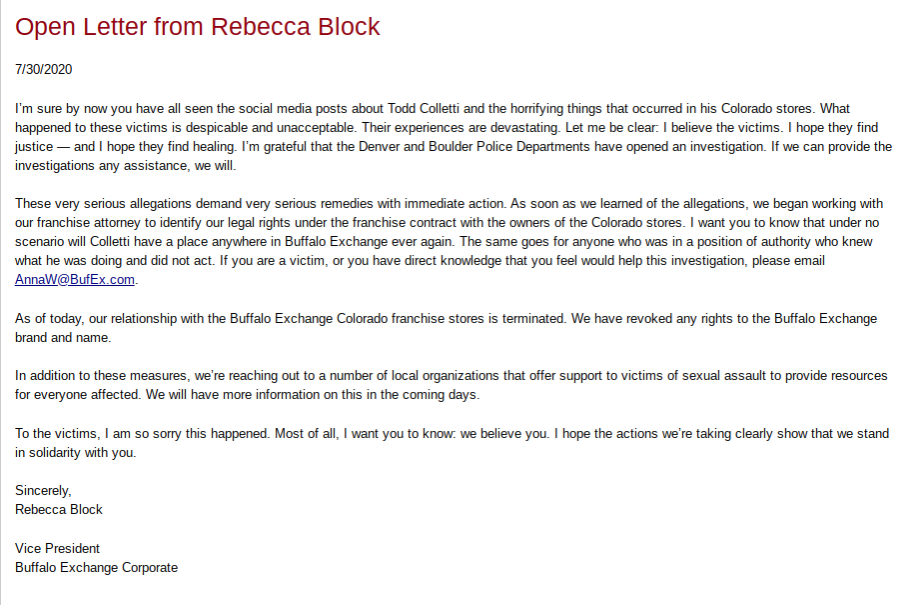 The response comes following the creation of an anonymous Instagram account (@buffalo.in.the.room) last weekend that began posting a series of screenshotted personal accounts of the acts carried out by Colletti. On Tuesday, the organization announced on its social media that it would close all of its Colorado stores indefinitely and it released Colletti “from responsibilities and associations with The Buffalo Exchange of Colorado.”

Block’s letter went on to confirm that both the Denver and Boulder Police Departments have opened investigations. Those looking to aid in the investigation can call detective, Shanna Michael, at the DPD at 720-913-2000.