[Update July 30 at 4:45 p.m.: Buffalo Exchange corporate stated in an open letter it has revoked the Colorado franchise’s rights to the brand and name.]

This weekend, a bombshell was dropped in the middle of Colorado’s fashion and thrifting community. An anonymous Instagram account (@buffalo.in.the.room) began posting a series of screenshots that detailed alleged instances of harassment, assault and discrimination carried out by Todd Colletti, an owner of The Buffalo Exchange Colorado stores. Today, the organization announced on its social media that it would close all of its Colorado stores indefinitely due to the impending investigation. It has also released Colletti “from responsibilities and associations with The Buffalo Exchange of Colorado.” 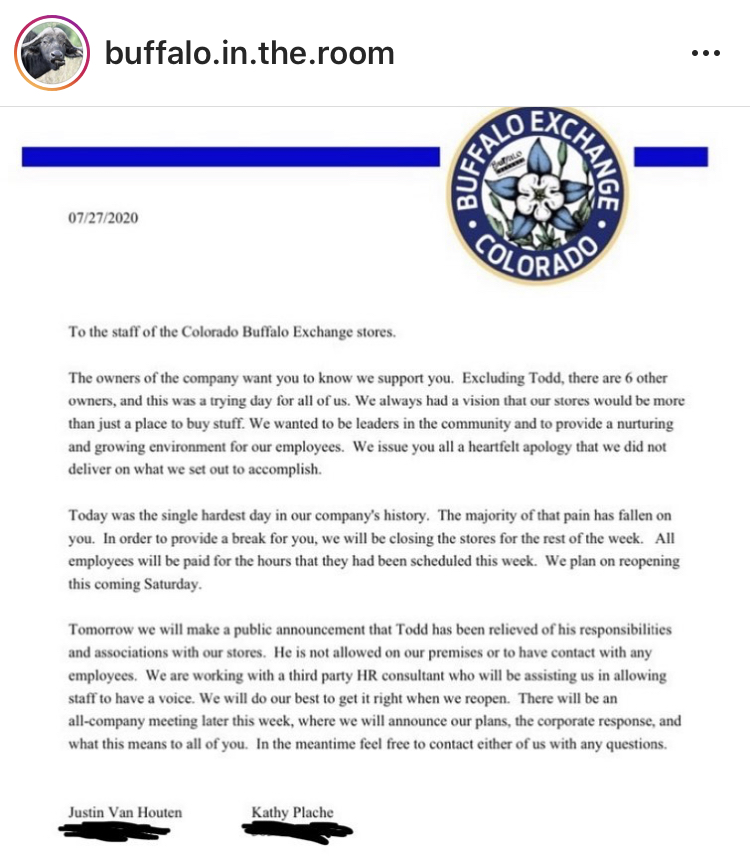 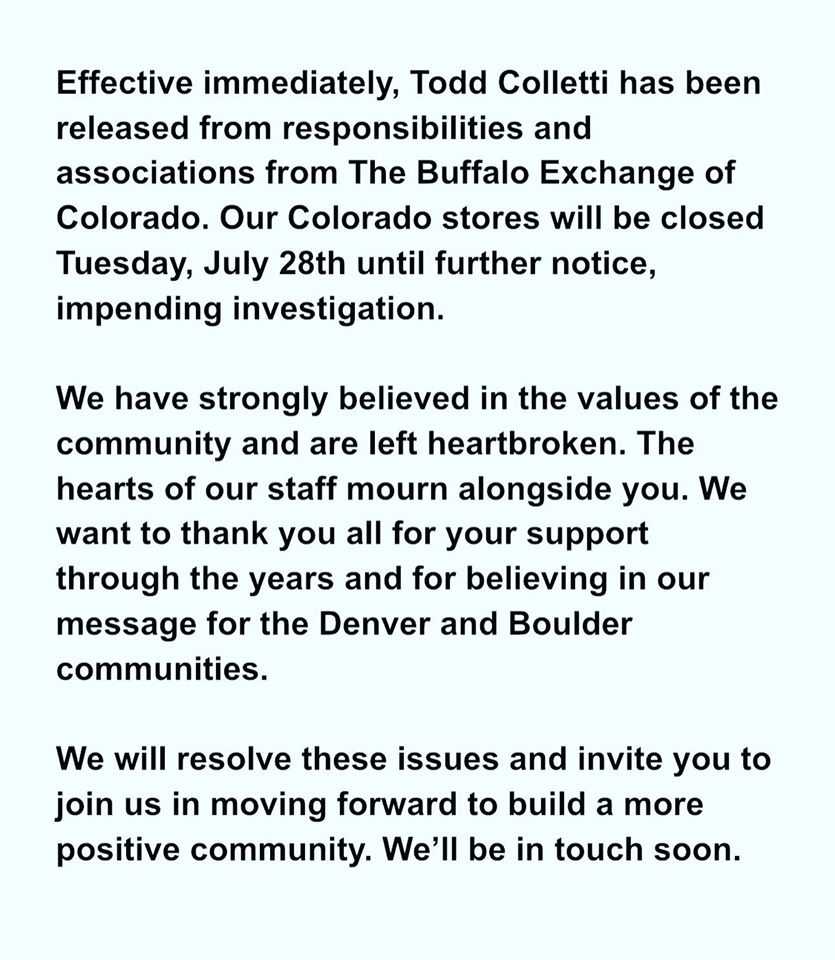 As for the source, it’s still unclear who is behind the posting. 303 Magazine has reached out for an interview with them as well as Buffalo Exchange Colorado and employees past and present. In the meantime, the account paints the culture as one fueled by drug and alcohol abuse where harassment, assault and discrimination carried out by Colleti were enabled to flourish. Colleti is also accused of frequently taking cash and clothes from the South Broadway store and using the location’s basement facilities (which includes a private bar) to throw parties where several alleged instances of harassment and assault took place.

Colleti has been associated with Buffalo Exchange Colorado stores for over two decades and helped bring the franchise to Colorado, along with several partners, in the late ’90s. On July 29, Buffalo Exchange’s corporate team emailed us an official statement explaining the next steps for the Colorado franchise and confirmation on an official police investigation:

The recent revelations about a franchisee in Colorado are beyond disturbing and abhorrent. We are grateful and encouraged that the Denver Police Department is speaking to victims and opening an investigation into these very serious allegations.

Right now, we are working to determine exactly what actions the Colorado ownership team that licenses our brand will be taking against Todd Colletti. At the same time, we are working with our legal team to assess our options in regard to this franchisee and its status under our brand. To be clear, we want to ensure that the individual or individuals responsible for these acts are not associated with the franchise or our brand in any way going forward.

To the current and former employees of Buffalo Exchange Colorado who experienced abusive behavior or harassment: Our hearts are with all of you. We will listen to each and every one of you, and we commit to full transparency, fierce advocacy and substantive action.  – A statement from Buffalo Exchange’s leadership.