When Tattered Cover Book Store co-owners Len Vlahos and Kristen Gilligan released a statement about with their stance on the nationwide protests and Black Lives Matter movement, their response backfired with heavy criticism.

In the June 6 statement, the Denver bookstore said they believed speaking up about the movement was a “slippery slope” among other things.  While they acknowledged that the movement was important, they decided to remain neutral and not engage in public debate on popular topics.

They did this by asking their audience to consider the bookstore’s history. Tattered Cover never released statements on Denver’s Urban Camping Ban, the Defense of Marriage Act or allowing Ted Nugent — an advocate for gun rights — to appear at an event following the Columbine High School shooting, they said.

“If Tattered Cover puts its name and weight either behind or in opposition to, one idea, members of our community will have an expectation that we must do the same for all ideas,” the press release said. “We do it for the principle.”

They announced that the previous silence in social and cultural situations had nothing to do with protecting sales and financial gain. Still, employees quit their jobs, book events were canceled and partnerships were severed. As a result, Vlahos and Gilligan released an apology on June 8 for their history of staying silent.

While the bookstore chain vouched to be proactive in the future, The Word, a non-profit public charity organization based in Denver, has put together an open letter and a list of requirements for Tattered Cover to adhere to for partnership to continue.

This list, signed by many Black and other POC writers, booksellers, educators, and other leaders/community members, asks Tattered Cover to specify certain goals for increased hiring from marginalized communities in Colorado, work with employees to develop a safe workplace plan and state goals to increase author and carrier representation of US communities and cease charging authors not represented by major publishing companies. 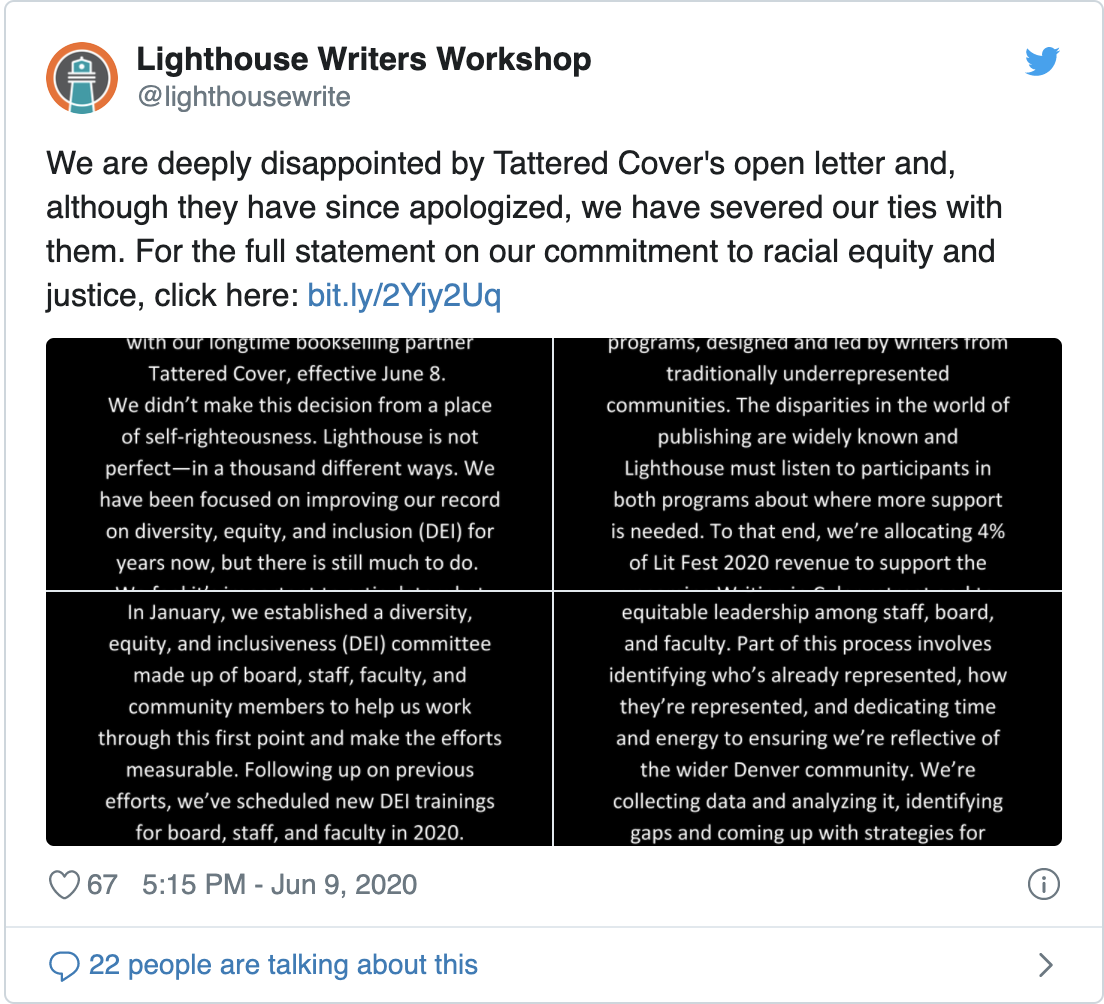 Also included in the list, The Word insists a donation of 10% of Tattered Cover’s paid promotional space to highlight Black authors and marginalized authors, continued support of participation in basic human rights and a reconsideration of police intervention for petty offenses.

Tattered Cover — which has strong ties to the education system in the Denver area — has been asked to join with a voting-empowered board for all future educational or large-scale community programming.

“Additionally, Tattered Cover will consider supporting organizations with experience and expertise in any relevant programming, rather than spearheading such programming within the bookstore,” The Word’s release said.

The Word also asks that Vlahos and Gilligan step down from book judging committees for one year and appoint individuals of marginalized backgrounds to serve for the time being.

To conclude the statement, The Word is asking for a response from Tattered Cover within 30 days. All individuals who signed the statement, have ceased purchases and partnerships until a response has been received.

So far, Tattered Cover has yet to make another statement regarding The Word’s community letter. The Word’s staff have put together the ongoing list of signatures to show Tattered Cover that this can be a time to reconnect with a community that has felt disregarded by the company. Currently, 600 people have signed the letter.

“It’s hard to sit by and be silent when you see a pillar in the community dehumanize and devalue the existence of an entire group of people,” Bunmi Ishola, Board Chair for The Word said. “Tattered Cover and its owners have a lot of influence in the book world, and so we are simply asking them to become better allies and create a safe space for the Black community in Denver and beyond.”

Find out more information in The Word’s community letter or sign your name to the list. Go here to take a look at Tattered Cover’s statements on June 6 and June 8.